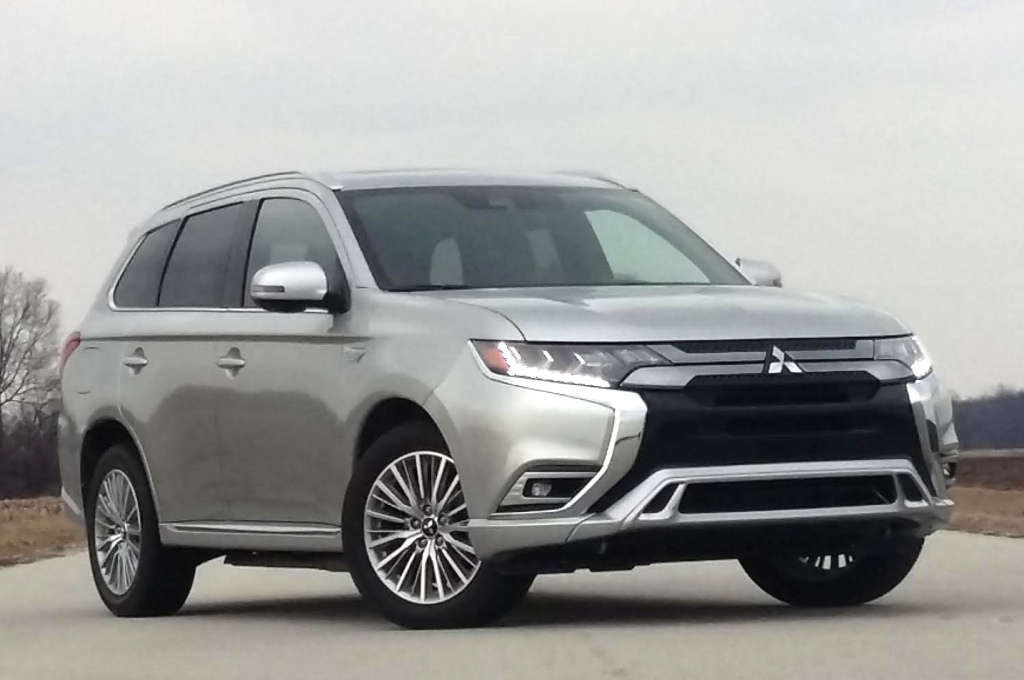 The not so good: Driving range

Every once in a while, a vehicle comes along that really seems to stand out. To my mind, the Mitsubishi Outlander PHEV Plug-in Hybrid is one of those vehicles. 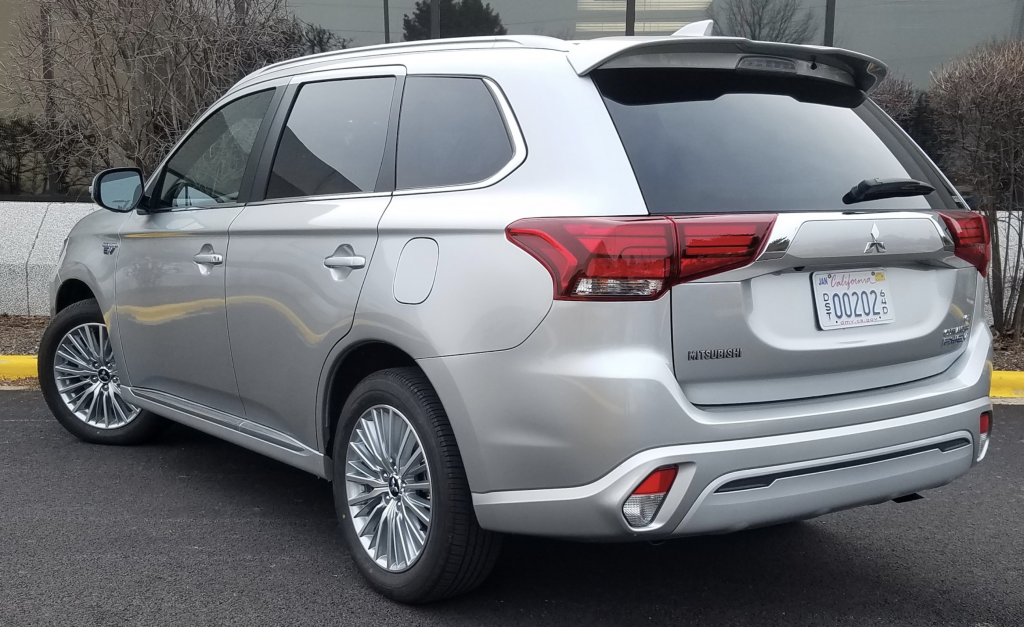 Although other versions (gas 4-cylinder and V6) of the Mitsubishi Outlander offer a third-row seat for up to 7-passenger capacity, the PHEV Plug-in Hybrid has only two rows for 5-passenger capacity. It comes standard with all-wheel-drive, the rear wheels being driven by one of the electric motors.

As we previously reported on a very similar 2018 Outlander PHEV, we invite you to read that report for more details. This time around, we’ll touch on some of the finer points noticed on our 2019 tester … of which there are many.

First, it’s worth noting that not only is this a plug-in hybrid, but that it’s an all-wheel-drive plug-in hybrid — “S-AWC” (Super All-Wheel Control) in Mitsubishi-speak. It’s also worth noting that while our top-line GT test vehicle listed for $42,625 including destination, a less-expensive SEL version starts at about $37,135. And both — by virtue of their plug-in status and 12kWh battery — are eligible for a federal tax credit of $5836. They’re also both covered by Mitsubishi’s 5-year/60,000-mile bumper-to-bumper warranty and 10-year/100,000-mile powertrain warranty. 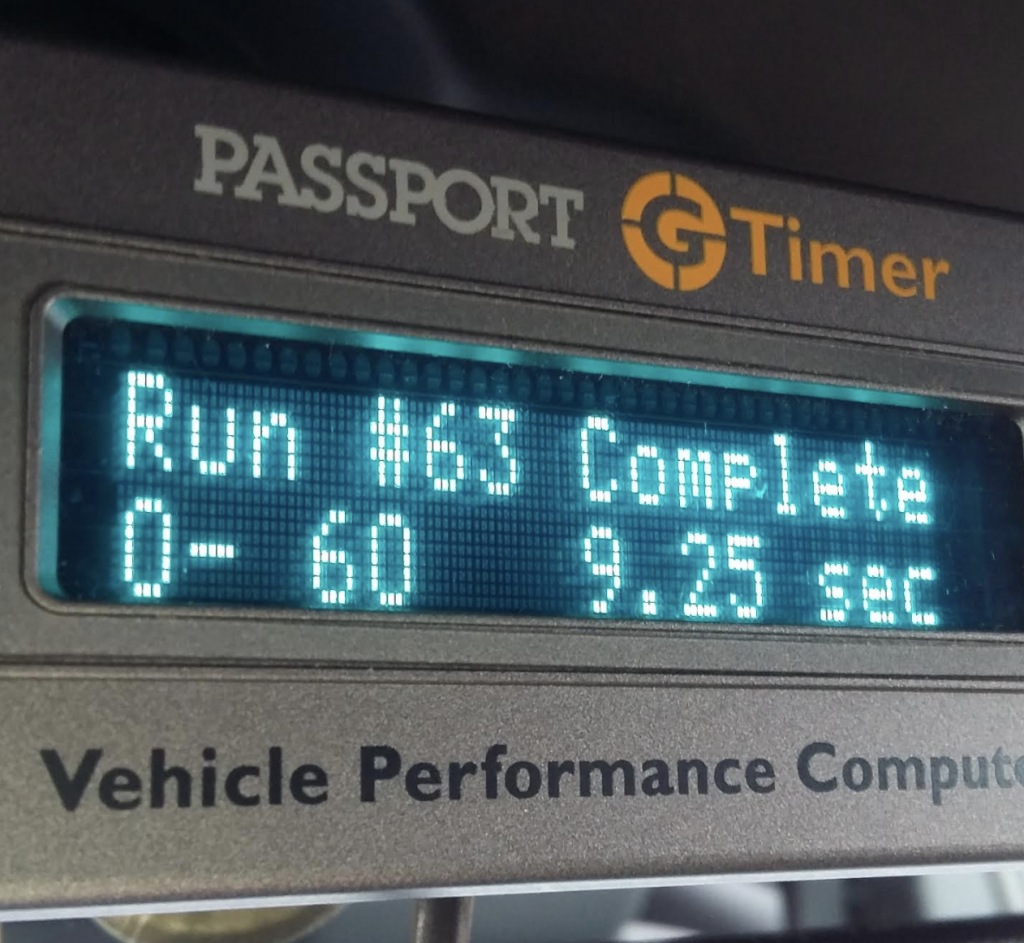 My Passport G-Timer clocked the Outlander PHEV at an average of 9.25 seconds in the 0-60 dash — hardly quick, but adequate.

While our cold-weather stint had the engine running after start-up even if you selected EV (Electric Vehicle) mode — which prioritizes electric propulsion — it might not in warmer weather. But the cold also brought out a couple of other elements we otherwise may not have noticed.

First, the PHEV includes an electric heater that seems to work in conjunction with the usual hot-water one. Through a smartphone app or the dashboard screen, you can program the heat to turn on before you start the vehicle, and you can do it even if the vehicle is in a closed garage – which you can’t do in a gas-engine vehicle. (Or at least, you can’t do it twice.) If you don’t do that and wait to turn on the heater until after you start the vehicle, the electric heater heats up far more quickly than in most cars; in fact, it was usually putting out warm air within a minute or two. As temps were in the low teens while I had the Outlander, this was really appreciated. So were the heated front seats and steering wheel, though the combination of using all undoubtedly cut down on electric-only range – which the EPA suggests is normally about 22 miles. 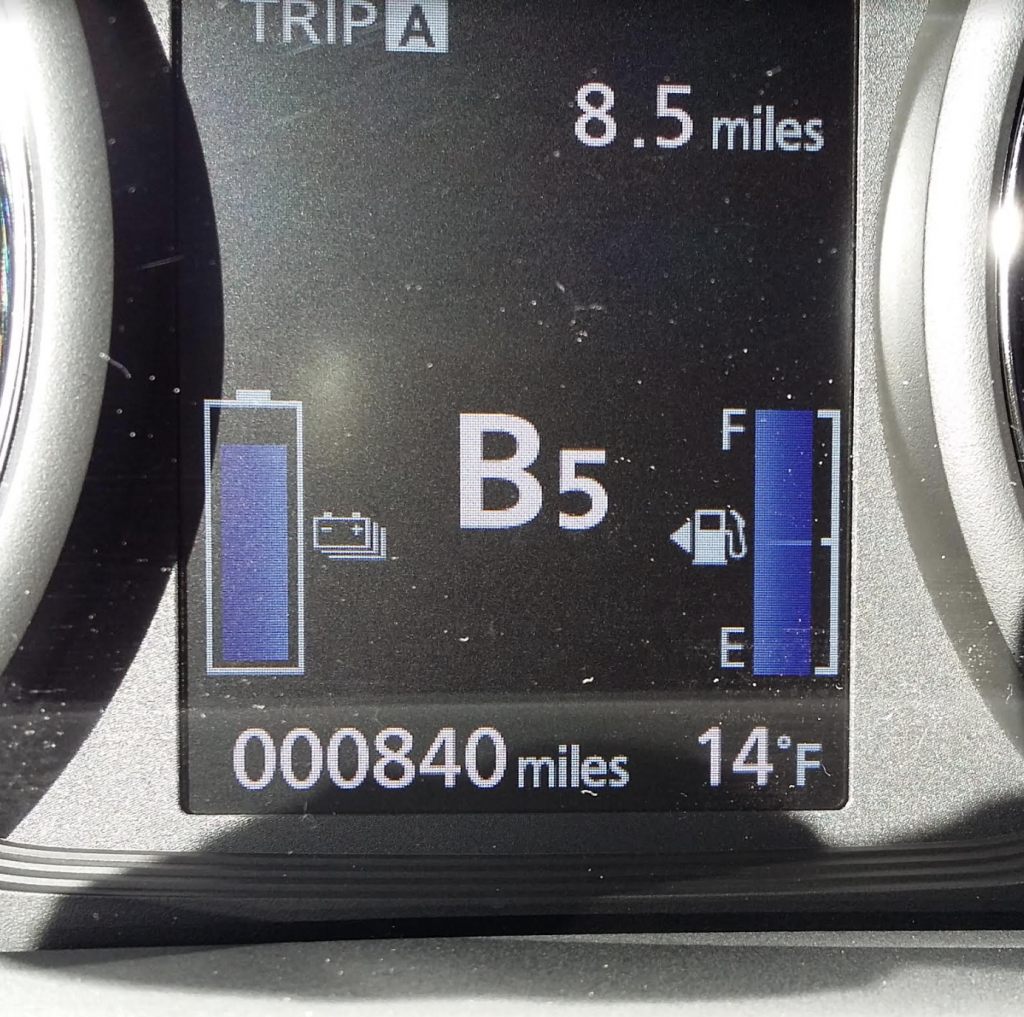 You can use the shift lever to go into “B5” — maximum brake regen — mode, which will slow you down automatically when you lift off the gas — a real plus in stop-and-go traffic.

When battery charge is depleted, the gas engine turns on automatically – and quite subtly – and the vehicle drives about like any normal hybrid. In either mode, it can’t provide a really strong full-throttle jump off the line, but speed builds very linearly, and there’s nearly instant (if not particularly strong) response to throttle inputs while underway — a common positive trait of electric vehicles. In normal driving, it never feels underpowered, and it averaged an acceptable 9.25 seconds in our 0-60 test.

One nice feature of the PHEV is the ability to increase the level of “regen” to a point where you rarely need to use the brake pedal to stop, until you slow to about 3 mph – at which point regen sort of goes away and you have to touch the brakes. This is very handy in traffic and probably saves wear on your brakes, as the slowing is due to the effort needed to turn the generator that recharges the battery. 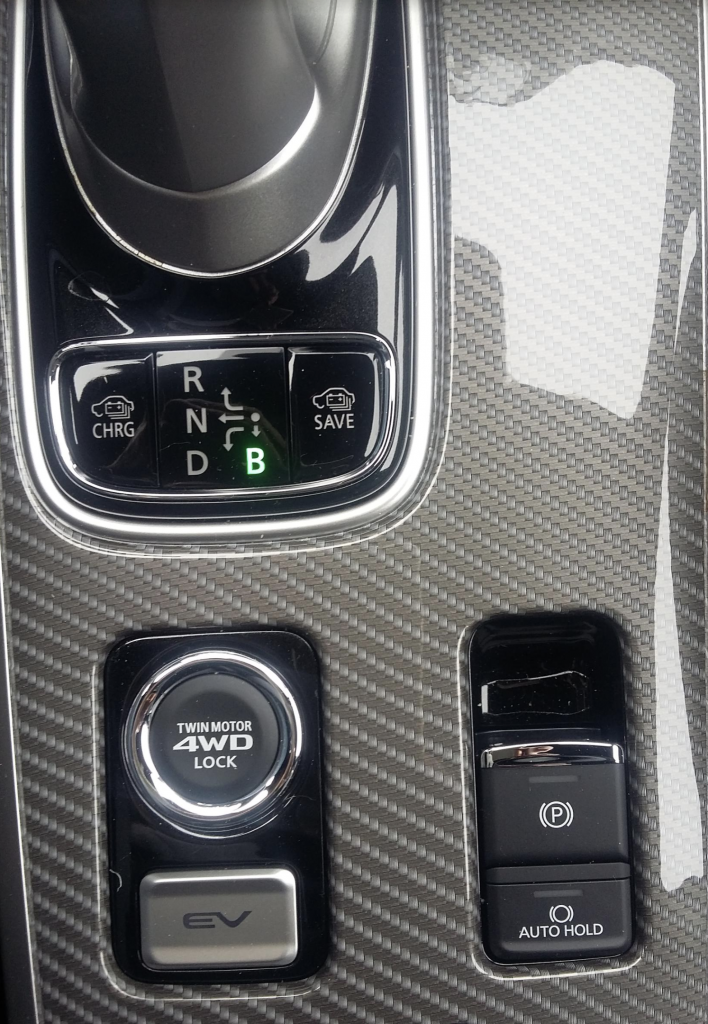 Behind the shifter are the Charge and Save buttons that allow you to charge the battery and then save it for city driving. Below those are the 4WD Lock button — for increased traction in the snow — and the EV button, which prompts the vehicle to run primarily on electric power. Right of that is the Auto Hold button, which will hold the brakes on during stops.

Another neat aspect of the Outlander PHEV is that there are handy console buttons that allow you to choose EV mode as well as Charge and Save modes. Charge mode allow you to force the engine to turn on to charge the battery even if you still have battery charge left, while Save lets you maintain battery charge and likewise run the engine instead of using battery power. Why would you want either? Because the biggest benefit of all-electric operation comes in stop-and-go driving, so if a highway stint is preceding that, you can hold off on electric operation until it can be best utilized.

Also on the console is a Auto Hold button that – when activated – allows you to take your foot off the brake pedal on long stops while the brakes remain engaged, then automatically releases them when you press on the gas – a nice touch.

While it’s impossible to nail down any solid fuel-economy numbers – as that depends on how often you charge the battery and how far you drive it before you charge it again – we can give some reasonable estimations. In 296 miles of mostly highway driving, starting with a full charge and charging once early in the stint, I managed 27.9 mpg. As the EPA “gas driving” estimate is 25 mpg, that seems about right. One other note in this regard: The Outlander Hybrid has but an 11.3-gallon fuel tank vs. 16.6 in the 4-cylinder “gas” version (15.8 in the V6), which rather limits your driving range between fill-ups. The EPA claims 310 miles of range using both gas and electric power, less than in most cars. 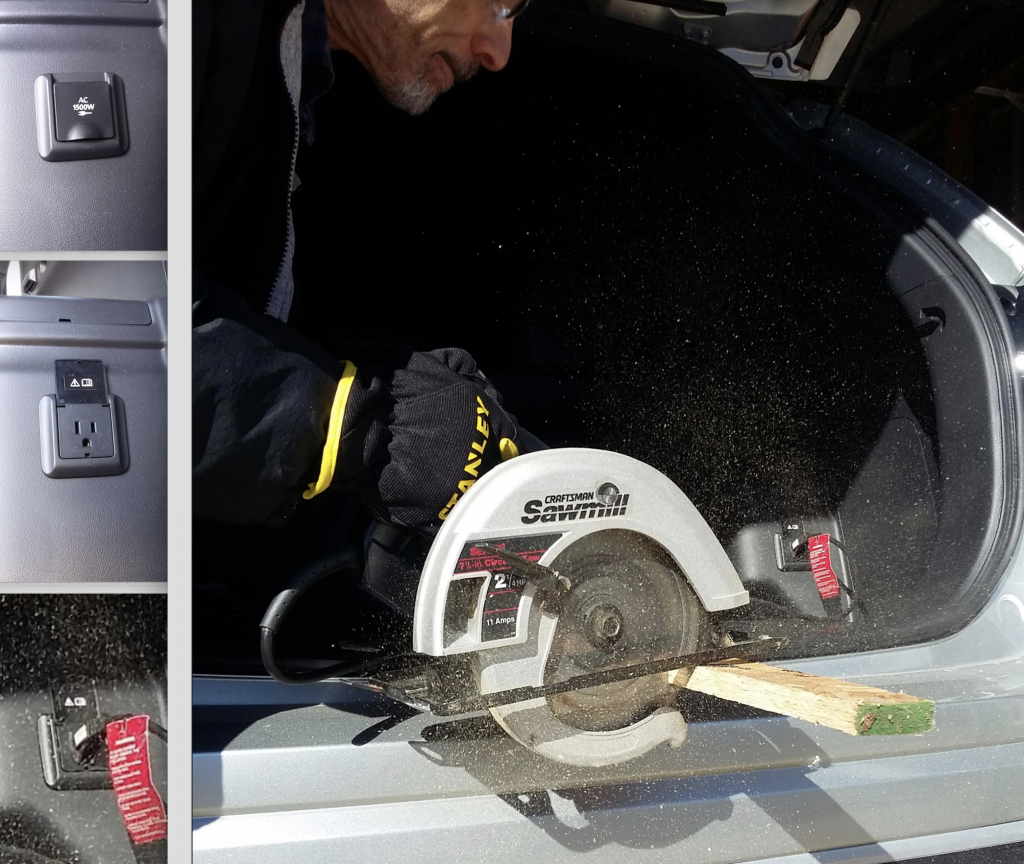 In the cargo area (and also in the rear-seat area) is a “household” 120-volt AC outlet that puts out 1500 watts — far more than in most of the few other vehicles that offer an AC outlet (which are usually limited to 400 watts or less) — enough to run almost anything you’d commonly plug into an outlet in your house. Shown is a circular saw (something commonly plugged into an outlet in my house) cutting through a 1-inch board.

One other Hybrid-related feature also stood out. While a very few vehicles include 120-volt AC (household) outlets, most only put out 400 watts or less. That’s enough to charge a laptop, but not enough to run even a small electric drill. But the outlets in the Outlander put out a whopping 1500 watts – enough to power a circular saw (!), which I know because I did it.

Under the charge-port door on the vehicle’s right rear fender is the usual Level 1/Lever 2 connector at left, plus a Level 3 CHAdeMO connector at right. The latter can be used to quick-charge the battery, or even to power your house.

Although it’s not commonly used yet, there’s another potential benefit to the PHEV. Included under the charge-port door that reveals the common Level 2 connector is a Level 3 “DC Fast-Charge” CHAdeMO port. While the modest 12 kilowatt-hour capacity of the battery doesn’t really warrant the use of Level 3 charging (the battery should fully charge in less than two hours on Level 2), having the Level 3 port allows you to power your house off the Outlander’s battery during a power outage. As mentioned, that kind of “V2H” (Vehicle to Home) connection is not common yet, but down the road it might be. And it’s always a good idea to look at how long your vehicle is going to be on the road before deciding what features you might want. 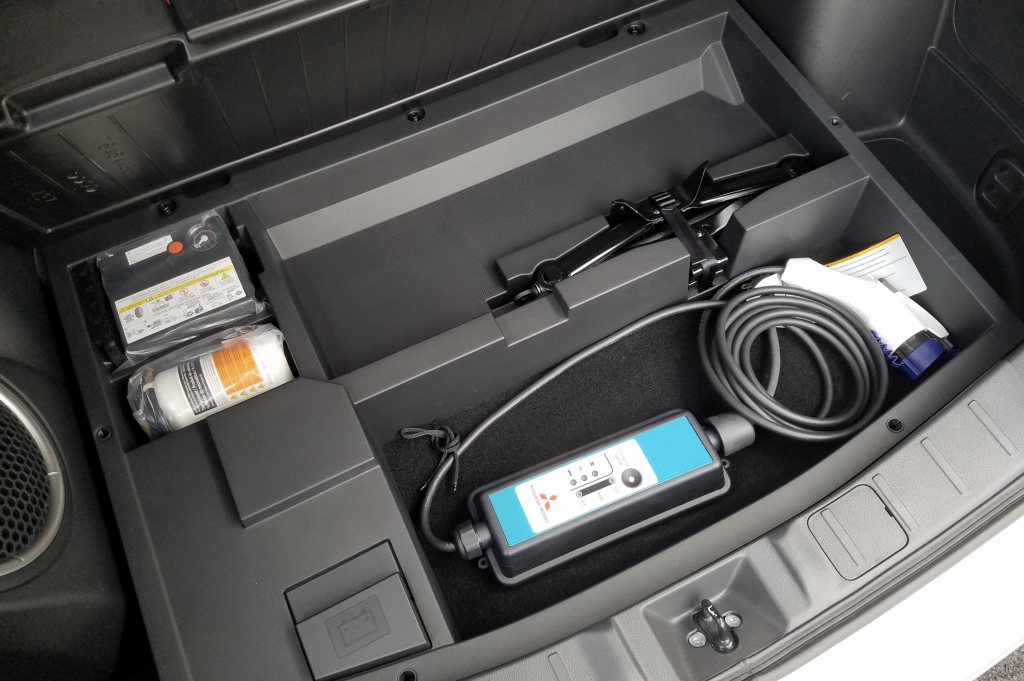 A large under-floor bin in the cargo area can hold the included charging cable — and quite a bit more.

While gas Outlanders come standard with three rows of seats, the Hybrid deletes the third row (probably to make room for the battery), providing instead a large under-floor cargo bin. This not only holds the Level 1 (120-volt household outlet)/Level 2 (240-volt) charging cable that comes with the vehicle, but leaves room for other stuff as well.

But we found other neat features on the Outlander that can likely also be found on its gas-powered siblings. One is adjustable-height headlights that let you compensate for heavy loads in the rear (which point the headlights higher potentially into oncoming drivers’ eyes) by rotating a dashboard “roller.” Our tester also included 360-degree cameras that you could select individually (such as the side ones to prevent “curb rash” on the wheels) by simply pressing a handy steering-wheel button. 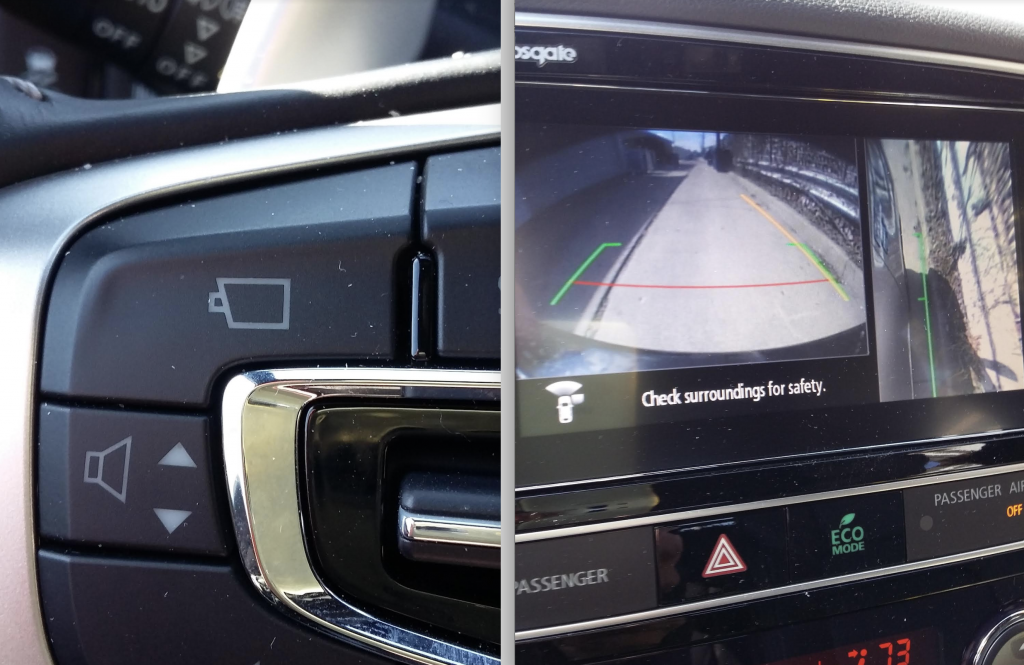 The Camera button (looks like a coffee cup) on the steering-wheel spoke allows you to select what camera view you’d like to see. Shown is a front view along with a curb-side view (at far right), handy if you want to preserve your wheels.

But perhaps the most relevant feature of the Outlander PHEV is that it’s one of the few plug-in, all-wheel-drive crossovers on the market, and it’s likely the least expensive. Furthermore, it outshines “plain” hybrid crossovers not only in being able to run on just electric power for a fair distance, but also by offering some unusual features and capabilities the others lack.

And we feel that’s exactly the kind of statement a stand-out vehicle should make.

I have to admit to being a little bit of a fiddler when a plug-in hybrid like this Outlander PHEV comes my way. “What happens if I drive it this way for a while?” I’ll think, electing to operate it in a manner that perhaps runs at a tangent from the way most folks would drive one most of the time.

With temperatures in the mid to upper 30s and a couple of full battery charges, I clicked into “EV” mode and just drove it “dry,” forcing the 2.0-liter gas engine to slickly step in. With heat, lights, and radio, a run home from work with some speedy expressway miles wrung 20.7 miles from the battery—a substantial portion of my commute. Out on the town the next night—with windshield wipers and a greater amount of expressway driving in play—the battery lasted for 19 miles.

The next experiment was to see how long it might take to fully charge a “spent” battery just by running the gas engine. In daylight hours with the heater on and the “Charge” function activated, it looked like about 45 miles would do the trick. I didn’t think all of this would do my actual gas mileage much good, but after 211.8 total miles of gas, hybrid, and electric driving, my petrol consumption worked out to a not-half-bad 31.6 mpg.

The Outlander PHEV GT-S is comfortably but not lavishly outfitted inside. It steers with ease and rides comfortably, and it has useful cargo flexibility. It’s a hybrid, yes, that’s also a practical compact SUV.

Outlander The Mitsubishi Outlander PHEV is one of the few plug-in hybrids on the market to offer all-wheel drive and the passenger and cargo space that comes with being a crossover — an attractive combination to our eyes.