Actually, reading this won’t tell you; only your owner’s manual knows for sure. But read on…you may yet be off the hook…

Many years ago, premium fuel was thought (and sort of advertised) to contain added detergents that helped keep fuel injectors clean. At the time, fuel injection was rather new, and the injectors’ tiny orifices could easily get clogged by dirt. Therefore, many people bought premium-grade gas for that reason, even though the engine didn’t really require it. But today, virtually all name-brand gasoline (and probably all gasoline, period) contains a sufficient amount of detergent to keep the fuel injectors clean, so that’s no longer a good reason to pay an extra 20 percent for your gas.

Historically, premium-grade fuel has mostly been used in high-performance vehicles that have high-compression, turbocharged, or supercharged engines, though it’s sometimes required in more pedestrian cars as well (many Volkswagens and Mini Coopers, for instance). Particularly when running under heavy throttle, these engines produce high cylinder pressures that can make lower-octane fuels “explode” rather than “burn,” which can cause engine damage. This explosion is often referred to as “detonation,” and premium-grade fuel contains additives that help prevent it.

The first sign of detonation usually comes under hard acceleration, with the engine producing a knocking or pinging sound—often right before it produces a “ka-BANG” sound. Detonation can also occur in engines with heavy carbon deposits in the cylinders, and this, too, can sometimes be remedied by using a higher-octane fuel than is recommended.

When it comes to fuel recommendations for vehicles,

Three words are pivotal: “Recommended,” and “Required” or “Only.” And they mean different things.

A fuel is branded “regular,” “mid-grade,” or “premium” based on its octane rating, which indicates the fuel’s ability to ward off the previously mentioned detonation; the higher the octane number, the better it is at fighting detonation. Typically: 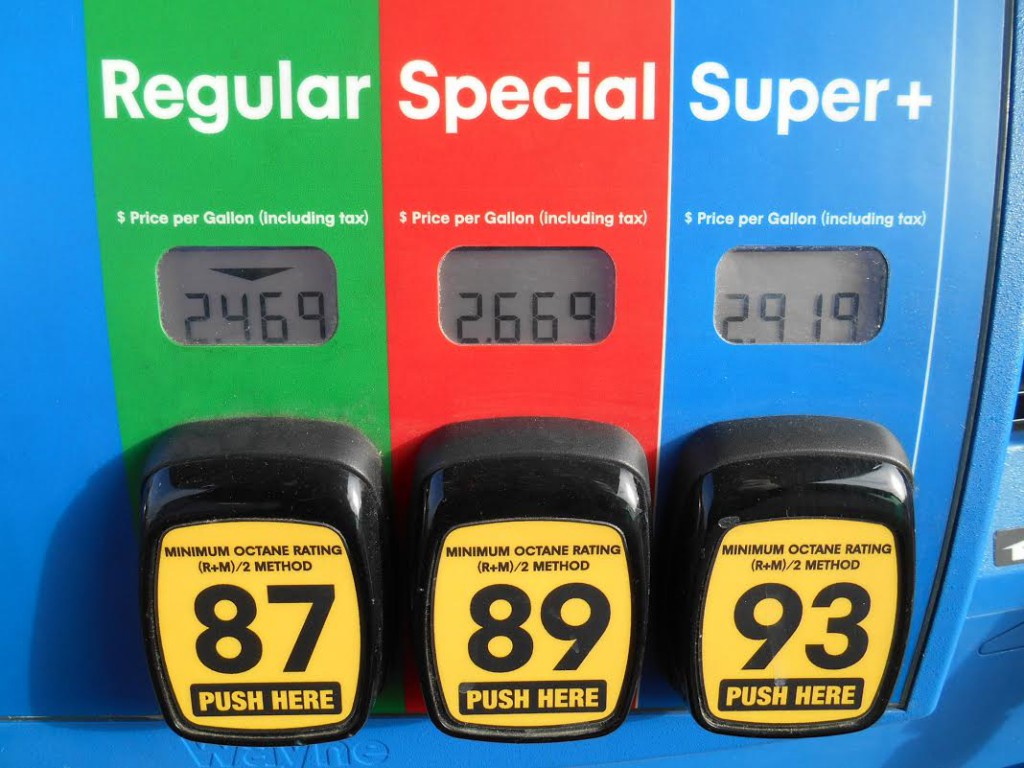 Regular and mid-grade fuels are typically found rated at 87 and 89 octane, respectively. Premium fuel varies by location, but is most often available in 91- and 93-octane formulations.

NOTE: In some high-altitude areas—usually over 5000 feet elevation—85-octane gas is also available. This is because there’s less oxygen in the air at high altitudes, and since oxygen is what mixes with gas to make the “bang”—and there’s less of it—the theory is you don’t need as high of an octane rating there. (By the way, it’s a general rule of thumb that—due to lower oxygen levels—an engine loses 3 percent of its power for every 1000 feet of elevation, so at 5000 feet, it’s down roughly 15 percent in power.) However, we’d recommend against using a lower-octane gas than what is listed for your vehicle. If you live at higher elevations where it’s offered, you probably already know whether you can run 85 octane without problems, but if you’re visiting, you may have a tank full of 85 octane when you return to lower elevations.

Although rarely recommended outside of some Chrysler-produced Hemi engines, some people use it if they experience knock when using Regular-grade gas; sometimes, the slightly higher octane is enough to get rid of it.

Premium-grade fuel is 91 Octane (or above) 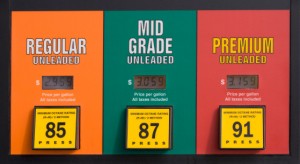 Lower octane numbers are commonly seen at pumps in higher-elevation markets, such as Denver, Colorado.

At some stations, it’s 93 octane, and can be even higher. As with using mid-grade gas to quell knock, premium may work if mid-grade doesn’t quite do the trick.

The best place to find what gasoline should be used in your car is in the owner’s manual; look under “Fuel” in the index in back. Most cars also have a sticker inside the fuel door that will tell you, but we often have brand-new test cars that don’t. Just remember the aforementioned definitions of “Recommended,” and “Required” or “Only.”

“87 Octane Recommended.” This means it’s fine to use Regular-grade gas, but you can also use mid-grade or premium—if you just want to burn up money.

“Premium Fuel Recommended.” This means the engine might produce a bit more power and better fuel economy if you use premium (typically only about 5% or less), but it will run just fine on mid-grade or regular. The small power and economy increases come from the engine being able to run greater ignition advance without causing knock. 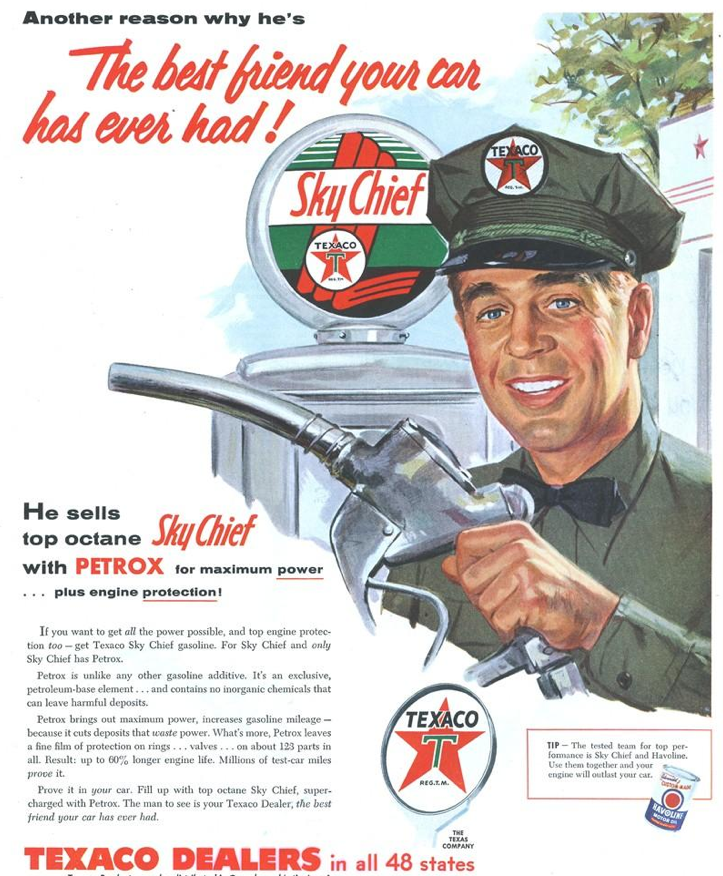 Regardless of what you may have heard, using fuel with an octane rating above what your vehicle requires will not improve performance.

One question that might arise is, “What if I accidentally put regular-grade gas in a car that requires premium?”

As mentioned, it’s rare that new cars require premium-grade fuel, but two test vehicles that passed through here recently did—or at least, that’s what it said on their fuel doors. As both were Lexus models, we called the company to see what they’d recommend if someone accidentally filled one with regular.

According to Doug Herbert at Lexus, “Required” is a bit overstated.

Herbert said that both vehicles (an RC 350 sports coupe and an NX 200t compact SUV) will run on regular-grade fuel without damage. But since both the advertised power ratings and the EPA fuel-economy figures were attained using premium, that’s what they have to put as the required fuel. However, he also warned that continued use of regular-grade gas would cause the engine’s computer to back off on the ignition timing—thus adversely affecting both power and fuel economy—and that it would continue to do so for a time even after the car is filled with premium.

It’s important to note that Herbert’s advice only applies to Lexus vehicles, as he obviously can’t speak for other manufacturers—and we can’t, either. And while our stance is that you should use premium-grade fuel if it’s stated to be “Required” or “Only,” here are some thoughts if you accidentally fill it with regular.

Detonation is your concern, and as it mostly occurs under hard acceleration, tread lightly on the throttle. Listen carefully for the telltale knock or ping that indicates detonation, which means you should try and keep other noises (such as the radio or conversation) to a minimum so you can hear it. As soon as you get down to a quarter or half a tank, fill it with premium, which will raise the average octane level fed to the engine.

One more thing. Since premium-grade gas often costs about 20 percent more than regular-grade gas, some folks have thought of trying to save money by using a $4 bottle of an octane-booster product to raise the octane level of regular-grade gas to that of premium. Don’t even think about it. While we don’t want to make any blanket statements here, we feel pretty confident in saying that a bottle of an octane booster—even one costing far more than $4—isn’t going to raise the octane level of a tank of fuel by four whole numbers (87 to 91). Some brands may say on the label that they’ll raise the octane level by “3 points,” but that usually means tenths of a point—so from 87 octane to 87.3 octane—which is certainly not worth it. If you’re a manufacturer of one of these products who wants to refute that claim, please write to us; we’d be happy to eat our words to save our readers money.

But for now, the best way to save money is to use the lowest-octane fuel your owner’s manual says is OK, even if the fuel door “recommends” that  you use premium. But if premium-grade fuel is “Required,” bite the bullet and put in the good stuff.