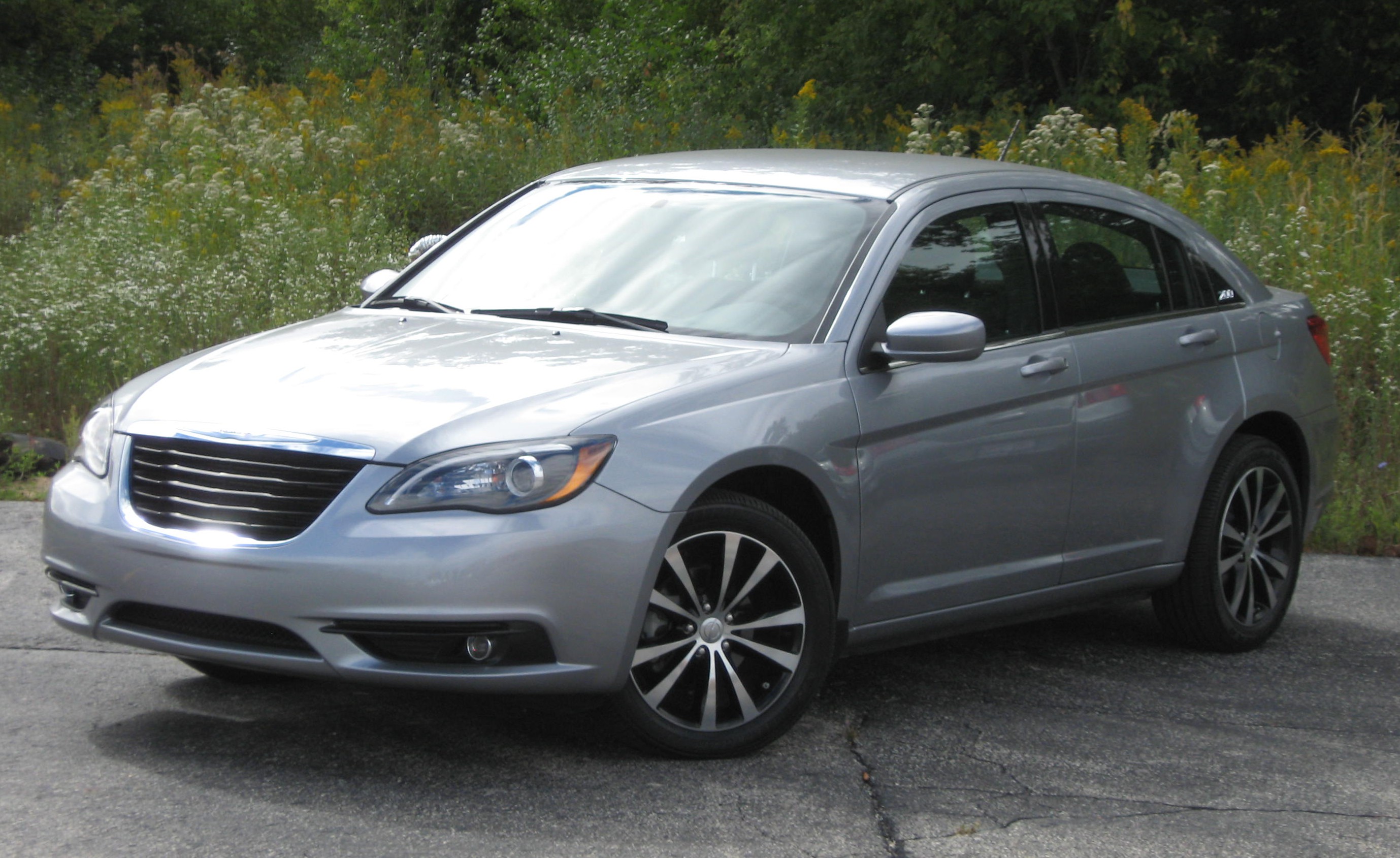 Our test Chrysler 200 sedan came with the S Package which includes these 18-inch wheels.

The not so good: Cranky 4-cylinder engine, mediocre fuel economy

Whenever a vehicle comes in multiple forms, such as with different powertrains, we’re always happy to get to test those different versions. Always happy, that is, from the standpoint of thoroughness. The difference in the driving experience from one to another might not always be as smile-inducing.

So it was with the 4-cylinder 2013 Chrysler 200 Touring 4-door sedan. CG Daily Drivers have seen their share of 200s with the 3.6-liter V6 and have generally been impressed by that engine. Having finally gotten a chance to try the 2.4-liter dohc four that is standard in base LX and step-up Touring models, this tester can pick a clear favorite: the V6. The 173-horsepower four cedes 110 ponies to the six and it certainly feels slower when pulling away from a stop or setting up a pass on the highway. It’s louder, too, signaling with a pervasive drone that the smaller engine is no paragon of refinement.

Also troubling was the fact that it didn’t return the kind of fuel mileage one might expect from a 4-cylinder engine joined to a 6-speed automatic transmission. EPA estimates for this engine/trans pairing are 20 mpg city and 31 mpg highway, but a 112.1-mile weekend turn in the test car, with 60 percent city driving, averaged 19.84 mpg. At least the 6-speed (which is standard starting at the Touring trim level) shifts smoothly and kicks down promptly.

In many other respects, the Touring sedan was like other 200s we’ve driven in recent years. Ride and handling are pleasing—though this driver was surprised once with a bit torque steer when stepping off from a stop. Interior room for 4 isn’t bad (but no class-leader) and entry/exit is easy through all doors. Cabin décor is a mix of hard plastics and soft-touch surfaces. The cloth-covered seats could use a little more support in the cushions to be truly comfortable. Touring drivers do get to grip a leather-wrapped steering wheel. Passenger incidentals can be stowed in either the good-sized glove box, a two-level covered console box (that doubles as a center arm rest), or door map pockets; rear passengers can avail themselves of door map pockets with built-in cup holders and pouches attached to the backs of the front seats. The trunk is wide at the back, but narrows considerably between the wheel houses. Rear seats fold down for additional capacity, but are higher than the trunk floor. 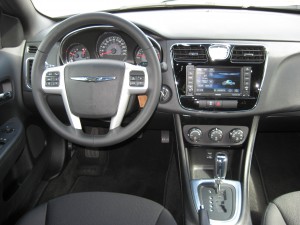 The 200’s cabin has a surprisingly upscale look and feel.

The 200 Touring’s starting price of $21,995 is pretty good for a mid-size car and buys features like the 6-speed transmission, electronic stability control, air conditioning with automatic temperature control, an 8-way power driver’s seat, satellite radio, steering-wheel-mounted radio controls, automatic halogen projector headlamps, and heated mirrors. Our tester was plushed up with two option groups: the S appearance package, which included fog lamps, specific exterior trim, and 18-inch alloy wheels; and an upgraded Uconnect audio system with touch-screen display monitor, Bluetooth, and voice recognition. They added another $1190 to the tab, but to this tester the smart buy would be to pony up $1795 for the V6.

In but a few years, Chrysler has either replaced or significantly updated every product in its portfolio. In every case, the new products were vast improvements over the vehicles they succeeded. Perhaps most in need of attention were the maker’s midsize cars, the Dodge Avenger and the Chrysler Sebring.

For the 2011 model year both car were tapped with the magic Fiat update wand, and both cars were better for it. Still, better than the Sebring doesn’t mean better than the competition.

The 200, as the Sebring is now known, is a good car, but it’s a good car in a hyper competitive segment packed with really good cars. That said, our most recent 200 test car came equipped in a most compelling fashion. And by compelling, I mean with a list price of just $24,180 nattily attired. That modest price includes that S Package, which for $495 brings a lot of cool exterior styling bits to the party. Likewise, the Uconnect Package seems reasonable at $695 and includes Blue Tooth connectivity and voice-command functionality. That price also gets you a car with power everything, a very nicely trimmed cockpit, capable handling, a (mostly) quiet cabin, and noteworthy ride quality.

What that price does not get you is a refined engine or especially impressive fuel economy. Our 21-mpg average over almost 250 miles of driving is notably lower than our real-world fuel economy with a 200 sedan equipped with Chrysler’s excellent Pentastar V6. Additionally, the 200’s standard 4-cylinder engine is neither powerful nor especially refined. In most driving, the engine goes about its business with little fuss, but when pressed to pass or merge the 2.4-liter mill wails menacingly while delivering only modest thrust. For Chrysler 200 shoppers looking for a more tranquil, relaxed commute, spending $1795 to upgrade to the V6 will prove to be money well spent.

Still, there is the question of value. At $24,180, the 200 comes in about $1200 less expensive than the delightful Honda Accord Sport. The Sport, like the 200 with the S Package, comes with a slate of attractive trim upgrades plus a sport suspension. What the Accord offers to bridge that $1200 gap is a much more refined engine, and better real-world fuel economy–better by about four mpg.

Shoppers not looking for power and especially driven by the bottom-line price will likely find a 4-cylinder Chrysler a compelling option. But, I say go for the V6, or check out the Accord Sport.