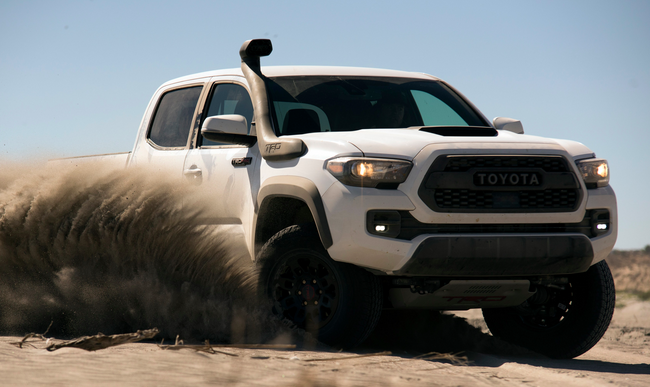 Toyota ups its TRD Pro off-road ante at the 2018 Chicago Auto Show with upgraded versions of its 4Runner SUV and Tacoma and Tundra pickups.

Toyota took its TRD models to new off-road heights with the 2014 introduction of the first TRD Pro versions. For 2019, the TRD Pro is itself elevated with stouter components fitted to the respective Tacoma, Tundra, and 4Runner variants.

Getting most of the attention is the compact Tacoma pickup. Like the other TRD Pro models, it adds new Fox 2.5-inch internal-bypass shocks, but it also gets an inch of additional front lift and an inch wider track thanks to special offset wheels. But perhaps the most noticeable addition is the optional Desert Air Intake, which snakes an obvious path up along the right-front roof pillar.

All of the TRD Pro models are available in Super White, Midnight Black Metallic, or exclusive Voodoo Blue, and they’re due on sale this fall as 2019 models.

Toyota seems to be taking this off-road game pretty seriously. While really intended for severe use, the burly nature of these TRD Pro models seems to also make them attractive to those who will never come close to maxing out their vehicle’s impressive capabilities. But if justification must be made for these folks, it does make their vehicle easier to spot in the Safeway parking lot ….