DETROIT—Fiat Chrysler Automobiles’ Ram truck division took the wraps off a redesigned version of its full-size pickup truck at the 2018 North American International Auto Show in Detroit. The 2019 Ram 1500 is lighter, more aerodynamic, and more fuel-efficient than the vehicle it replaces, and offers several new technology features.

The 3.6-liter Pentastar V6 and 5.7-liter HEMI V8 engines (and their respective 8-speed TorqueFlite automatic transmissions) are updated to improved fuel efficiency, but specific fuel-economy numbers haven’t been released yet. The V6 makes 305 horsepower and 269 pound-feet of torque, and the Hemi cranks out 395 hp and 410 lb.-ft. of torque. Ram hasn’t yet provided information on the latest version of the 1500’s EcoDiesel V6, but company reps said they feel confident the engine will retain “best-in-class” stats. 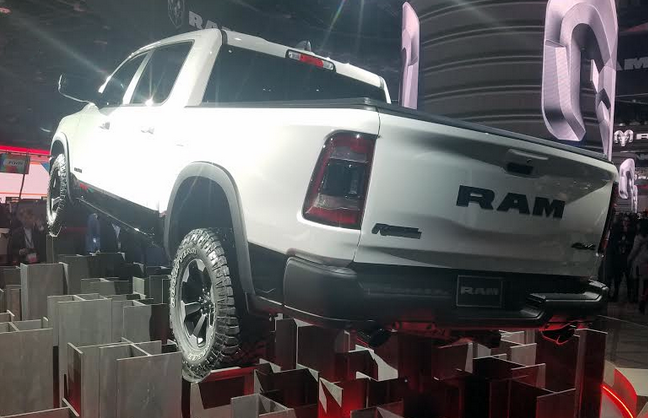 Newly available on both gasoline engines is an eTorque mild-hybrid system that replaces the traditional alternator with a belt-driven motor generator paired with a 48-volt battery pack. The eTorque system enables fuel-saving stop/start functionality, brake regeneration, and short-term torque addition to the engine crankshaft in certain driving conditions (up to 90 lb.-ft. of torque to the V6 and up to 130 lb.-ft. to the Hemi V8). There is also a new thermal management system that uses the heated engine coolant to quickly warm up the drivetrain lubricants to reduce viscosity-related efficiency losses.

The maximum payload has been increased to 2300 pounds and the maximum towing capacity to 12,750 pounds. The new Ram 1500 sheds up to 225 pounds compared to its predecessor, thanks in part to a new frame comprised of 98 percent high-strength steel and increased use of composite components. The tailgate, engine mounts, steering system gear, and some chassis crossmembers are now aluminum.

Suspension and ride refinement has been a Ram strong point, and the redesigned 1500 appears poised to continue that leadership with new Frequency Response Damping shocks and a next-generation air-suspension system. That available air suspension can also be considered an active-aero feature; along with active grille shutters and the aerodynamically improved body, the Ram 1500 has a drag coefficient of .357—the best in the class, according to the company.

The redesigned 2019 Ram 1500 builds on this pickup’s core strengths while upping the levels of refinement, technology, and fuel economy. Class-exclusive features such as the novel RamBox lockable storage bins remain available, and the chassis updates and enhancements promise better ride quality—an area in which the Ram was already at the head of its class. The addition of the eTorque system and other weight-saving/aerodynamic enhancements will certainly improve fuel economy, but we won’t know by how much until Ram releases fuel-economy numbers. Like the just-unveiled 2019 Chevrolet Silverado, the new Ram 1500 boasts significant differentiation in design details across its broad model range, which will allow customers to tailor a pickup to fit their wants, needs, and budget.