Several journalists were offered a taste of the Autobahn Experience at a recent press event. Sadly, my track time was limited to use of the Ferrari California Spyder in the foreground. Oh, woe is me. . . .

It’s often a Father’s Day dilemma: What to get the dad who has everything.

Sure, you could buy him a gift, wrap it up, and hope for the best (and that he doesn’t already have one), or you can get him a day he likely never will forget.

At several areas around the U.S., there’s a new kind of “country club” sprouting up that’s aimed specifically at car guys: privately owned racetracks on which the members get to drive their cars at speed. As with the traditional kind of country club, they usually have steep entrance fees and yearly dues, but making use of them requires a much bigger cash infusion than a set of clubs and a sleeve of balls. Except for ones like the Autobahn County Club, located outside Joliet, Illinois.

Like others of its type, the Autobahn is a privately owned racetrack. And lest you’re picturing a glorified go-kart track, it’s not. It’s the real deal. It’s divided into the 1.5-mile, nine-turn North Track and the 2.1-mile, 15-turn South Track, which can be combined to create a 3.5-mile track with a 2,000-foot straightaway. And no speed limit.

Normally the club is open only to members, but it also hosts the “Autobahn Experience”—a half-day driving program open to anyone with a driver’s license and $579, and it includes instruction, autocrossing, and high-speed track time. Also breakfast and lunch.

But the real draw of the Autobahn Experience is the cars. You don’t use yours; you use theirs. And theirs are pretty spectacular.

One thing I learned in a long-ago driving school—where I had to use my own Datsun 280ZX Turbo—is that most production cars are woefully inadequate on a racetrack. Mostly it’s the brakes; they simply aren’t made to repeatedly haul a car down from 100+ mph speeds. But those used for the Autobahn Experience aren’t like “most production cars.” Not all will be available at every event, but the current crop includes:

If you don’t know what any of these cars are, your dad likely will. It is—almost literally—Christmas in July, as the next event is held on the morning of July 6. Others are held about once a month through October, with dates set closer to the time of the event. If you’re not local, you can stay at one of several nearby hotels, including the Hollywood Casino.

The $579 cost of the Autobahn Experience’s half-day program is pretty amazing considering you’d probably spend more than that to replace the brakes you’d undoubtedly fry on your street car.

You can find more details on Autobahn’s website: AutobahnCC.com. Or call them at (815) 722-2223. It would almost surely be a gift your dad would thoroughly enjoy—and always remember. Plus, you don’t have to wrap it.

P.S.: Autobahn also puts on similar corporate events for 10 people or more that include a half-day conference room along with the half-day driving program, as well as defensive driving programs aimed at teenagers. The Autobahn is also hosting the “24 Hours of Lemons” race this weekend (June 8 & 9). If you don’t know what that is, the website sums it up: “It’s not just for rich idiots. It’s for all idiots.” Cars are basically beaters that have to survive 24 hours at racing speeds. Hilarity usually ensues. Also quite a bit of mayhem. (Just the cars themselves are a stitch.) Tickets are $20 a day, $30 for both days. The website 24hoursoflemons.com lists the schedule of races throughout the country. 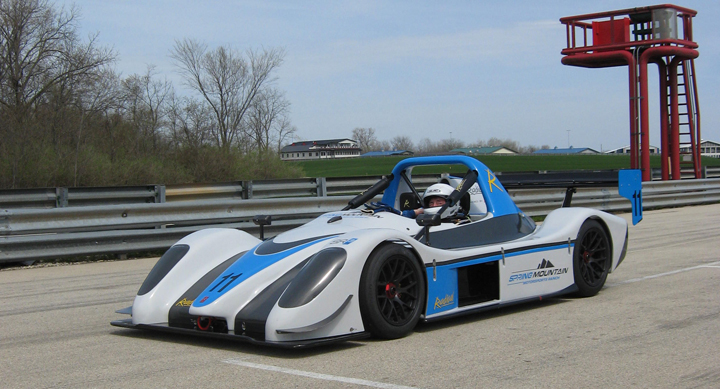 Also tested that day were the club’s new “Radicals”—lightweight racers with ferocious performance that far exceeds anything legal for the street.