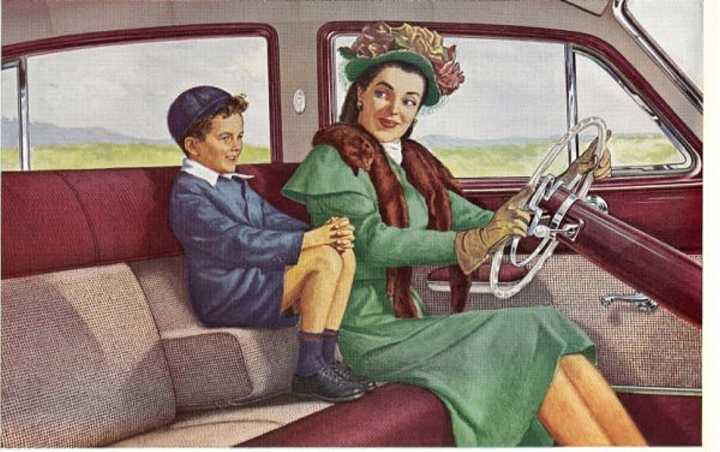 There once was a time when it wasn’t considered child endangerment to let kids travel outside the confines of a child seat. Today, the mother in this 1949 Frazer brochure would be hauled off to jail and incur the wrath of every parent in her neighborhood.

No seat belts? How about a tether and a gun?

When the Facebook fans of Collectible Automobile were asked their favorite childhood car seat, we got some interesting answers. The armrests in both front and back seats were the most popular. The ledge behind the back seat was also favored—especially in VW Beetles where it was a deep well. Standing on the transmission hump was also prevalent. Sitting on the floor was mentioned. Some parents folded down the station wagon’s back seat and spread out a mattress for the children. In pickups, the bed was the place to be.

Of course, there is a reason that child seats became mandatory. One Facebook fan was pronounced dead at the scene after he flew off the front armrest and hit the dashboard headfirst. Remember, radio knobs were spikes in 1958.

Fortunately he lived to tell the tale. And thanks to child seats, many more children reach adulthood.