If you’ve never heard of the FCX Clarity, it’s hardly surprising. As a fuel-cell vehicle, it represents a motive technology that’s still in its relative infancy.

A fuel-cell vehicle runs on hydrogen—a fuel that isn’t exactly found on every street corner. A component called a fuel-cell stack combines the hydrogen that’s carried on board in tanks with oxygen from the ambient air to create electricity. As in an electric vehicle, the electricity powers a drive motor that propels the car. Thus, the fuel cell takes the place of a battery—with some advantages and some disadvantages.

Chief among the advantages of fuel cells is that enough hydrogen can be carried on board to run a car for at least 200 miles or so—more than twice the distance most current electric cars can run on a full battery charge. And refilling the hydrogen tanks after driving that far can be accomplished in minutes rather than the several hours it would take to recharge a battery. So a fuel-cell-powered car would have all the advantages of an electric-powered car in terms of emissions (of which there is nothing but a small amount of harmless water vapor), while allowing refill times similar to that of a conventional gas-powered car.

On the downside is the availability of hydrogen—or lack of same. It doesn’t occur naturally, so it has to be extracted from some substance that contains it. The most common is water . . . as in H2O: two parts hydrogen and one part oxygen. But water won’t give up its hydrogen without a fight. One way to convince it to do so is to electrocute it. Shooting electricity through water causes the hydrogen atoms to part company with the oxygen atoms, and the hydrogen can be collected. Trouble is, it takes quite a jolt of electricity to do that, and generating the electricity can produce more pollutants than the fuel-cell car saves. So at least one of the challenges to widespread use of hydrogen is being able to generate enough “green” electricity through renewable resources such as wind, solar, or hydro.

The other problem is how to get that hydrogen to local filling stations. There is no hydrogen infrastructure currently in place (such as the underground pipe network that’s used for natural gas), so it would likely have to be transported by truck or rail. So just like with the generation of the electricity to make hydrogen, the delivery process produces pollution, which offsets one big reason we’d want fuel-cell cars in the first place.

Even with those hurdles to clear, many experts see fuel-cell vehicles such as the FCX Clarity to be the wave of the future. But to 25 drivers, the FCX Clarity isn’t the future—distant or otherwise. It’s the now.

Since 2008, Honda has built 25 examples of the FCX Clarity that have been leased to individuals in the Los Angeles area. Why L.A.? Because that’s where the only current public hydrogen filling stations in the country are located. As of this writing, there are eight public stations that are open 24/7, with another six or so open during certain hours. That’s hardly what you’d call extensive coverage, but more are being added all the time. It’s expected that 68 will be in operation by 2015, and roughly 100 will be operational by the end of 2017.

Those who have chosen to lease the FCX Clarity do so for $600 a month, a cost that covers the car, the hydrogen it uses, and any maintenance. It also includes the collision coverage, which—for a car built in such low volume—would otherwise be astronomical.

While 25 cars is hardly a lot, Honda is building more all the time. Production was slowed after the tsunami struck Japan last year, but it’s now ramping up again.

So what kind of car do buyers get for their $600 a month? Well, the FCX Clarity is a 4-door “fastback” sedan that’s about the size of a Honda Accord. The interior has somewhat of a space-age look, and passengers are treated quite well, as a host of luxury and convenience features (such as heated and cooled front and rear seats) are standard—which is fortunate, as there are no options.

In terms of the driving experience, the FCX Clarity performs very much like most other electric-powered vehicles. Compared to gas-powered cars, the most notable differences are in noise (there isn’t much aside from a periodic whirring sound from the fuel-cell stack) and response to throttle inputs, which is refreshingly instant. The latter is one of the most endearing features of electric vehicles in my book. Another is that, due to the heavy battery—or in this case, a small battery but heavy hydrogen tanks—being mounted low in the vehicle (typically beneath the floor), the car’s center of gravity is lower. That results in less body lean in turns.

The bottom line is that the FCX Clarity is very pleasant and even quite fun to drive. And although the car looks quite distinctive both inside and out, most uninformed passengers would probably not realize they were riding in such a clean-running, futuristic car until they noticed the whir from the fuel-cell stack—which would only stand out because the rest of the car is so quiet.

And that’s exactly what most alternative-fuel vehicles aim to achieve: a driving experience that’s much like the gas-powered cars most people are used to but with an environmental and economic advantage. In the case of a fuel-cell car, the technology represents a vast departure from what is common today. But if the FCX Clarity is any indication, no one need fear the hydrogen-fueled future. 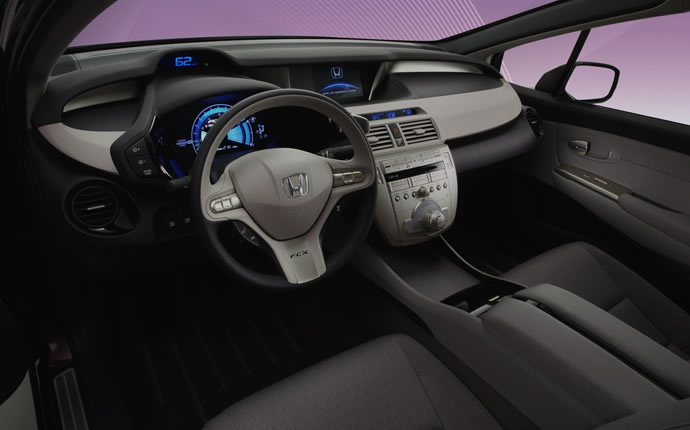 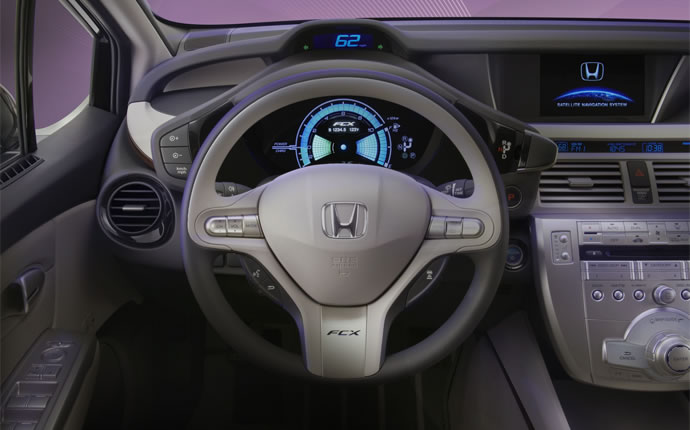