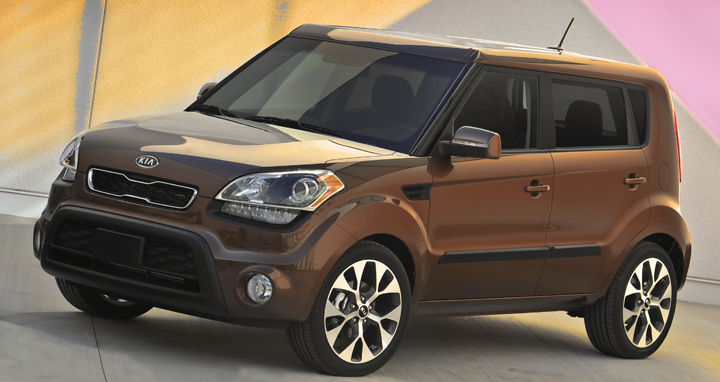 Note: This report supplements Consumer Guide Automotive’s full report on the 2012 Kia Soul, a subcompact car that starts at $13,900. The Kia Soul ! (aka Exclaim) is the highest trim level and retails at $19,600.

Acceleration: Car and Driver reports that 0-60 mph takes 8.2 sec with the 6-speed automatic—mandatory on the Exclaim—versus a sprightlier 7.4 with 6-speed manual. The tester felt like an 8.2-sec car to me, which is to say not very punchy in most situations. I blame fairly high peak power and torque speeds (6500 and 4800 rpm, respectively), though the 22 extra horsepower and 9 extra pound-feet of torque in this year’s revised 2.0-liter 4-cylinder are welcome. Typical of automatic cars with small-displacement engines, this one wants to “hang” in 2nd gear through slow corners, which means tromping the throttle to get into 1st and the meatiest part of the engine’s power band or else using the handy manual-shift feature. The tranny is fairly quick to downshift at mid-range passing speeds in straight Drive, though this, too, requires a heavy right foot. Ironically, the test car had a “jumpy,” unprogressive throttle action that constantly annoyed.

Fuel Economy: Averaged 23.2 mpg over 107 miles of Phoenix-area driving that was mostly low- to medium-speed city/suburban driving. That’s a bit disappointing against the EPA’s 26/34 city/highway ratings.

Ride Quality: The tester came on P235/45R18-94V Hankook Optimo H426 tires, a size that’s standard for the Exclaim model. I don’t know about lesser Souls with 15- or 16-inch rubber, but I did not like the ride quality of this Exclaim. It’s agitated and thumpy even on pavement that doesn’t ruffle many other small cars, registering every ripple and crack no matter how small. This suggests the suspension is way oversprung and underdamped. The 45-series tires only make things worse. I’d rate this model’s ride no better than “4.” It’s that crude and irritating.

Steering/handling/braking: Test car’s brakes were quite grabby and thus hard to modulate until I grew accustomed to the pedal feel. Also, its steering suffered a big on-center dead spot and felt rather wooden on turn-in. Agree with my colleagues that cornering lean is “noticeable;” in fact, it’s bad enough that I felt the need to slow down some for tight turns. So although this car is “reasonably nimble,” as the main report says, it’s also not much fun to drive.

Quietness: This Exclaim suffered quite a bit of road noise, probably due to the low-profile tires and perhaps more than other Souls on smaller wheels. Wind rush wasn’t bad, all considered, but the engine never settled down, even in gentle cruising. One problem, I suspect, is fairly short (numerically high) gearing, as a steady 70 mph required a busy-sounding 3000 rpm or so in 6th.

Controls: The main gauges are quite easy to read, but the odometer/trip-computer display at the base of the speedometer is not, due to a combination of red coloring and too much shrouding (the gauges are all tunneled). Agree that center-dash controls are OK, but the small touchscreen means small touch points for some audio functions. Its size also compromises deciphering the rear-camera view, and the screen washes out easily in even moderately bright ambient light.

Details: Kia has made Soul interiors look nicer for 2012, yet the “built to a price” feel of previous models lingers on. Soft-touch surfaces are in short supply even for a low-cost car, and some of the hard plastics used are prone to easy (and permanent?) scuffs and scratches. On the plus side, the test car had an impressively solid drive feel and no rattles.

Room/comfort (front): The seats could use somewhat longer tracks, as this long-legged 6-footer could not get quite far enough away from the pedals for comfort.

Room/comfort (rear): I’d say leg, knee, and foot room are adequate behind a tall front-seater, but hardly generous. And entry/exit isn’t that easy, due to narrow sills that demand a bit of careful footwork.

Cargo room: Must disagree with my colleagues about cargo space behind the rear seat. It really isn’t that great, so the Soul isn’t too practical for a long trip with four aboard and all the stuff they’re likely to carry. Roof rack, anyone?

CP Says . . . I didn’t like this particular Soul very much, though a lesser version might prove more agreeable, especially for ride comfort. I came away feeling that Kia didn’t try as hard in redesigning this model as it did with, say, the latest Rio. Even if that’s not true, this Soul strikes me as fairly crude versus the Scion xB and Nissan Cube, both of which impress as rather more professional in design, engineering, and execution. So even though it’s top-of-the-line, the Soul Exclaim seems just another on-the-cheap small car that appeals mainly for trendy styling and affordable pricing. I see quite a few Souls running around Phoenix, so Kia is obviously doing something right, but this fashion-driven box is not for me.