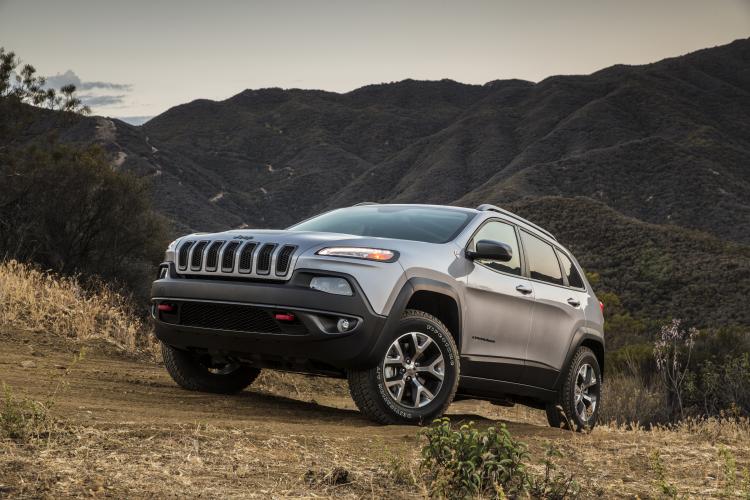 The 2014 Jeep Cherokee, shown here in Trailhawk trim, is the first vehicle in Chrysler’s stable to sport the maker’s new 9-speed automatic transmission.

The nameplate is familiar: Cherokee. The vehicle it’s on isn’t.

Jeep’s 2014 replacement for the Liberty—the model-year-2002 successor to the first vehicles that were badged Cherokee—is still a midsize sport-utility vehicle, but now in the emergent crossover-SUV mold. That means down deep it is based on a car platform, the front-drive Alfa Romeo Giulietta/Dodge Dart. It offers a choice of two engines, including a new downsized version of Chrysler Group’s Pentastar V6, and marks the debut of a 9-speed automatic transmission. It gets fuel-mileage numbers that the last Cherokees sold in North America couldn’t have touched with the proverbial 10-foot pole, and it can be equipped with a host of technology features that didn’t even exist in ’01.

With a wheelbase of 106 to 107 inches (depending on the drive system ordered), width of up to 74.9 inches, and overall length of 182 inches, the 2014 Cherokee is about six inches longer nose to tail and almost two inches wider than the last Liberty. In profile, the body shape is in the mainstream of today’s mid-size SUVs, and Jeep designers say they incorporated a series of visual cues, such as trapezoidal wheel openings, to maintain some kinship to the Cherokee’s bigger brother. “We’ve attached a lot of Grand Cherokee to what you see in the 2014 Cherokee,” says Mark Allen, head of Jeep design. Gone are most of the straight body lines and flat surfaces historically associated with Jeep vehicles. The new look has its detractors, though. Critics seem especially scornful of the slits that ride high on the front fascia and house turn signals and LED daytime running lights while projector-beam headlamps rest in pockets just above the bumper.

Jeep interior designers claim the flow of the instrument panel was inspired by outstretched eagle wings. The portion of the center stack that holds the audio controls and a pair of climate-system vents is shaped to do homage to the grille of the World War II-era Willys MB. 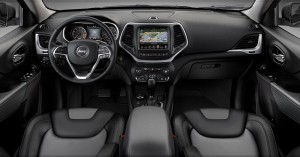 Jeep interior designers claim the flow of the instrument panel was inspired by outstretched eagle wings.

The 2014 Cherokee comes in four trim levels: Sport, Latitude, Limited, and Trailhawk. The first three are available in 2- or 4-wheel-drive configurations, while the “Trail Rated” Trailhawk comes only as a 4-wheeler.

Aside from a unique drivetrain, the Trailhawk picks up a few trail-friendly bits (though it sheds some of the Limited’s niceties). Reshaped lower fascias front and rear maximize approach and departure angles and sprout red tow hooks. The dark charcoal color of the fascias is reprised on the mirrors, beefy fender flares, and the moldings around the 7 vertical grille slots. The interior sports “all-season” floor mats and cloth-and-leather seats. Underneath, skid plates provide cover for major mechanical components.

Interiors are named for various locations around the world that influenced their colors and accents. They include Morocco (available on all models), Iceland (for Sport, Latitude, and Limited), Grand Canyon (cloth only; for Latitude), Vesuvio (leather only; for Limited), and Kilimanjaro (for Trailhawk).

Standard in all models is the Fiat-developed 2.4-liter Tigershark MultiAir 2 ohc 4-cylinder engine. It makes 184 horsepower at 6400 rpm and 171 pound-feet of torque at 4600 rpm. It is joined to a segment-exclusive 9-speed automatic transmission. With overdrive ratios on the top four gears, the transmissions plays a key role in fuel-economy gains over the departed Liberty (Jeep says more than 45 percent). We weren’t able to independently test for mileage on our media-preview test drives, but EPA ratings for front-drive Cherokees are 22 mpg in the city and 31 on the highway; models with the base 4-wheel drivetrain are rated at 21 and 28, respectively.

Optional for all but the Sport is a new 3.2-liter variant of Chrysler’s dohc Pentastar V6, a 3.6-liter engine in other applications. The 3.2 makes 271 horsepower at 6500 rpm and 239 pound-feet at 4400 revs, and gives the Cherokee a towing capacity of 4500 pounds. EPA city mileage ranks at 19 mpg; highway figures are 28 mpg on the highway for front-drivers and 27 mpg with the base 4-wheel setup.

Twisting through canyon roads near Los Angeles, the four proved itself lively enough, but the V6 clearly was stronger and quieter—even if it did give off a nice burble under acceleration. The 9-speed trans kicked down promptly and shifted smoothly. It never seemed lost as we got on and off the power frequently while scrubbing off speed in tight switchbacks, then accelerating toward the next curve.

The chassis features McPherson struts in front and a coil-sprung four-link independent setup in back. The few bumps and dips we encountered in our on-pavement test drives were well damped and sideways body motions never got bad enough to make us break stride in the twisties. Steering inputs were promptly heeded, but feedback through the wheel was somewhat lacking. Brakes are 4-wheel antilock discs with 13-inch-diameter rotors all around. 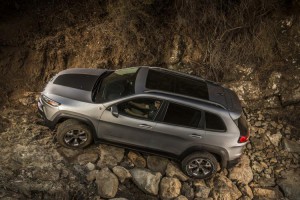 The most off-road ready Cherokee is the Trailhawk, which comes exclusively with the Active Drive Lock 4WD/AWD system.

Sport, Latitude, and Limited can be had with a choice of two 4-wheel-drive systems. The base arrangement—actually an all-wheel-drive—is called Active Drive I. It has a single-speed power transfer with no low gearing. Active Drive II has a two-speed power transfer with low. The Trailhawk’s sole drive is Active Drive Lock—essentially Active Drive II with an added locking rear differential. All three Active Drive systems incorporate Selec-Terrain, which lets drivers pick from one of five surface-condition settings to optimize traction. To this, the Trailhawk adds hill-descent control and Selec-Speed Control, which provides ascent and descent control. With Selec-Speed engaged, a driver can creep steadily—with no accelerator inputs—as slowly as .6 mph, which we did without a hitch on a sandy and rocky test course with steep inclines and declines.

The Technology Group, one of eight option packages, includes a ParkSense feature that can not only parallel park the Cherokee but also perpendicular park between two other vehicles. The pathologically parking-averse need never again pass up any space wide enough to fit their Cherokee.