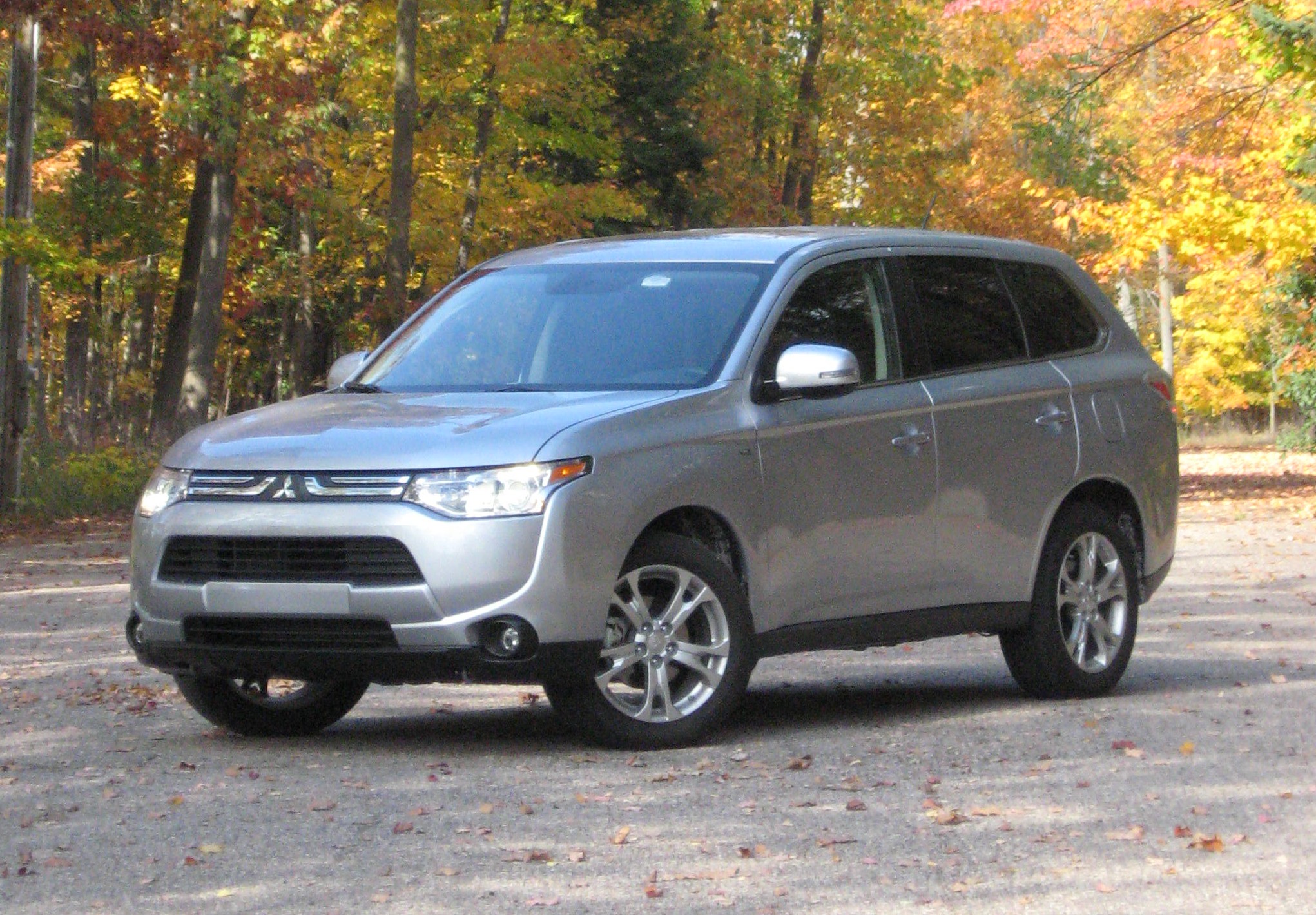 The redesigned 2014 Mitsubishi Outlander retains its three-row seating and available V6 power, making it the only compact SUV to offer both.

The compact SUV class has seen explosive growth in recent years. Yet despite fielding two entries in the segment, Mitsubishi has remained a second-string player. While that is unlikely to change dramatically, the company may attract a larger audience with its redesigned 2014 Outlander (which joins the 14-inch-shorter Outlander Sport introduced for 2011). At least some of that may be due to the fact that the Outlander offers some rare or unique features in the class that didn’t used to be so. 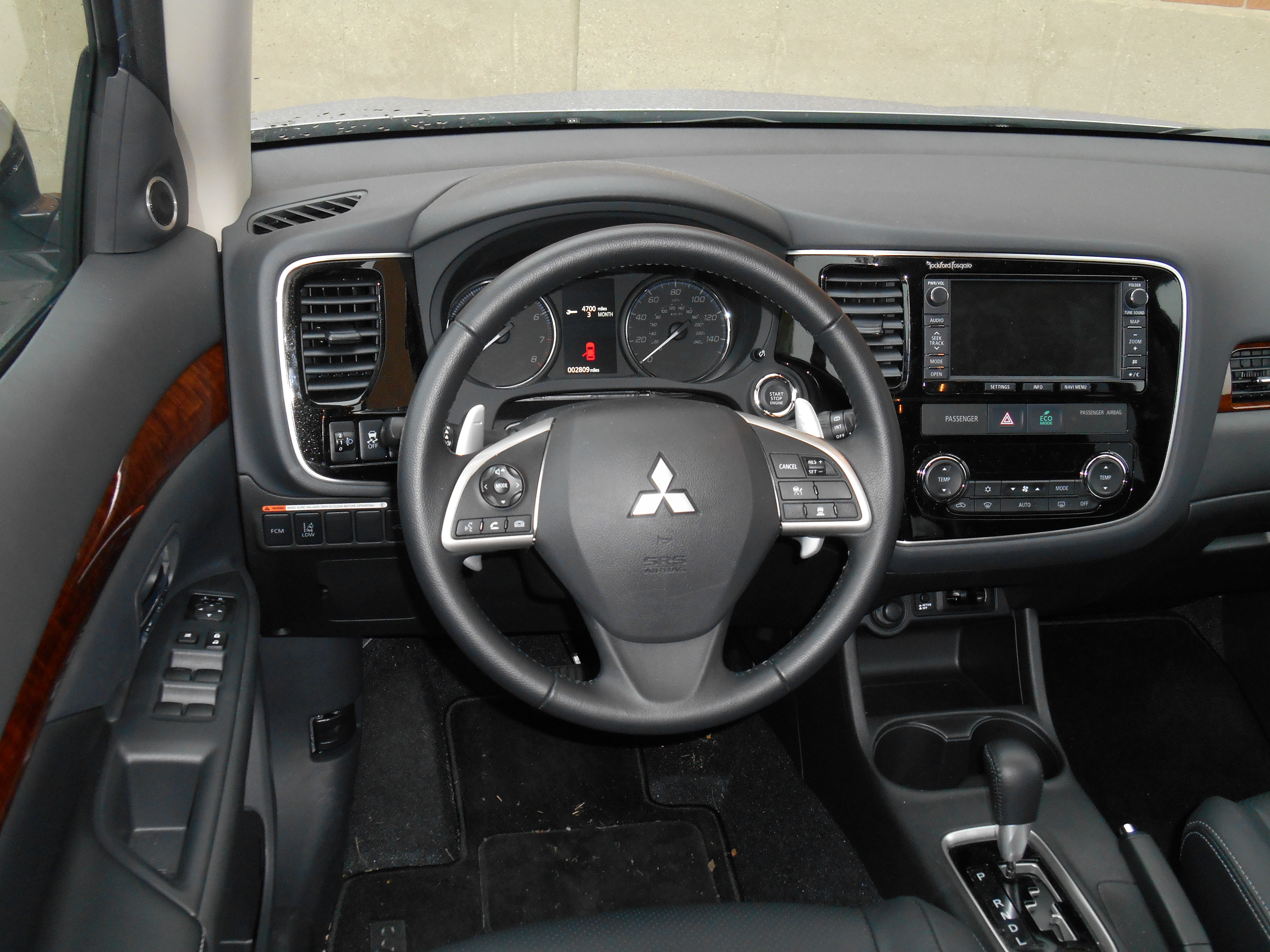 Back in 2012, for instance, there were six compact SUVs that offered a V6 engine; for 2014, there are just two, and one is the off-road-focused Jeep Wrangler. The other is the Outlander. In 2012, both the Outlander and Toyota RAV4 offered three rows of seats; today, just the Outlander does, though the redesigned 2014 Nissan Rogue – due later this fall – will as well. But the Rogue will come only with a four-cylinder engine, making Outlander the only compact SUV to offer both three-row seating and a V6.

As one might expect given its seven-passenger capacity, the Outlander is one of the larger entries in the compact-SUV class. Yet it’s not particularly thirsty compared to its rivals, especially when fitted with the standard 2.4-liter four-cylinder engine. EPA estimates with the four-cylinder are 25 city/31 highway with front-wheel drive, 24/29 with all-wheel drive. The V6 – which comes only with AWD – is rated at 20/28, and that’s the model chosen for our extended-use test.

Shortly after it arrived – and with less than a thousand miles on the odometer – the Outlander was taken on a series of mostly highway trips that covered more than 1300 miles. During that time, it averaged an impressive 25.6 mpg – and it wasn’t even “broken in” yet. We’ll see if that gets even better after it has accumulated more miles.

Poking around the Outlander revealed some interesting elements.

While the third-row seat is really intended for teens or younger kids, a 5’9 adult (such as myself) will fit, though they’ll ride knees up, their hair may brush the headliner, and egress will be challenging. The second-row seats slide fore and aft several inches to “balance” legroom between the second and third row, a nice feature. 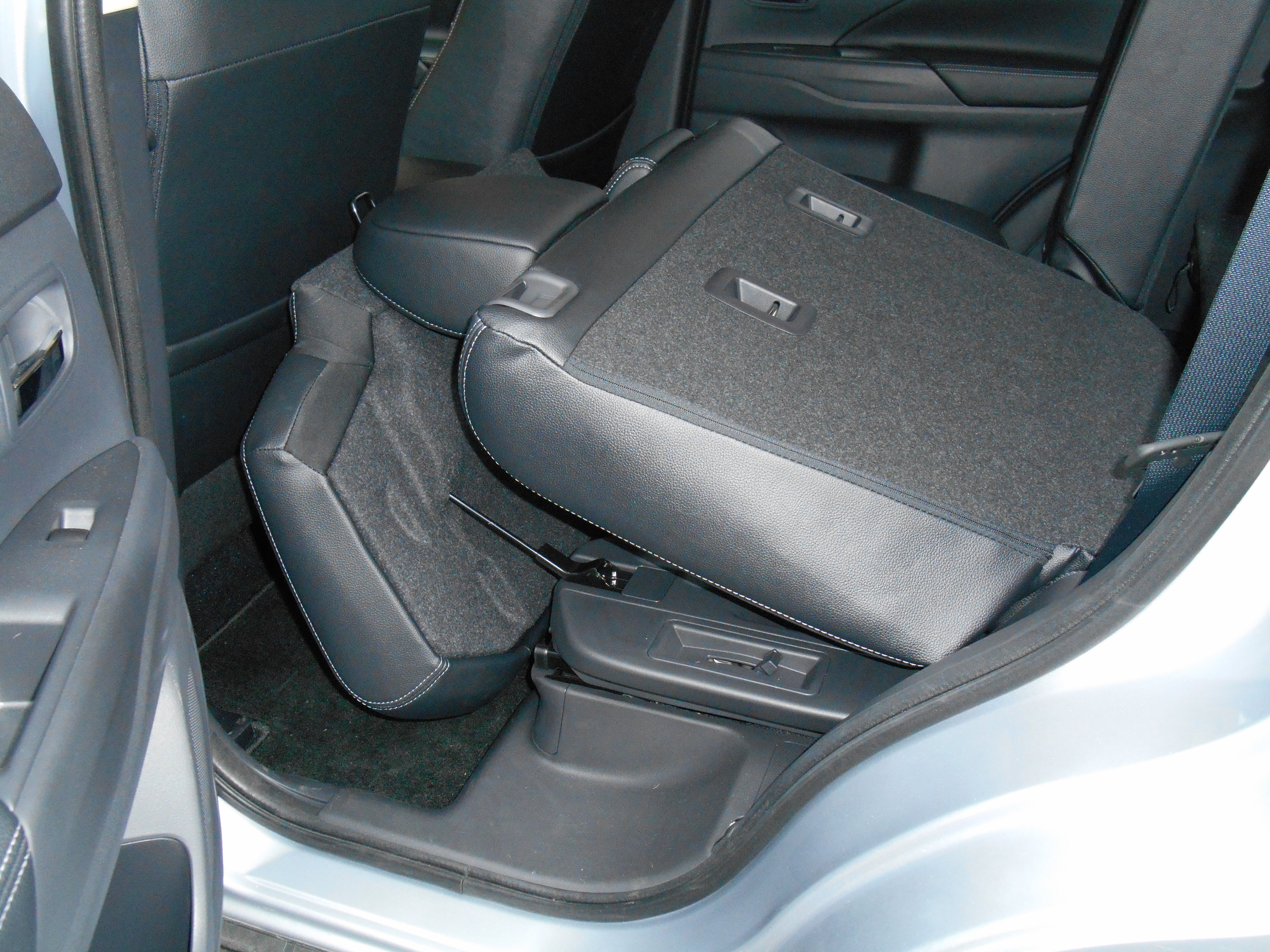 The second-row seat backs won’t fold flat unless the cushion is flipped forward and the headrests are removed; they’ll only fold this far without removing the headrests.

Although the second-row seats slide forward easily for third-row access, they’re not nearly as easy to fold flat as in most compact SUVs. In order to do so, the seat cushion must be flipped forward, the headrest removed, and a lever in the seat base moved forward before the seat back will fold flat. Once it’s folded, however, the cargo space is large and cubic, with a flat floor. There’s also a wide under-floor bin at the back, which can hold the third-row headrests, and those for the second row can be crammed in an open side bin. Our test vehicle is also fitted with a power liftgate.

In the cabin, our Outlander GT impresses with woodgrain trim and many padded surfaces, including the dash top, door tops, and armrests, though padding on the door tops and armrests is quite thin. There’s a good-sized glovebox, moderate-size two-tiered console box, and a large forward-console bin for storage. On the left side of the dash is a headlight-beam adjustment wheel that allows you to lower the beams when you have a heavy load in back so that your headlights won’t blind oncoming traffic – a neat feature I made use of on my trip.

The 2014 Outlander comes in four versions: 2WD ES, 2WD SE, AWD SE, and AWD GT. Base prices range from $22,995 to our GT’s $27,795, not including $825 for destination. Standard equipment includes the third-row seat along with air conditioning, CVT automatic transmission, power windows/mirrors/remote locks, and a host of other features that make it a bargain seven-seat family vehicle. Furthermore, a number of high-end options are available, including forward-collision warning, lane-departure warning, navigation system with voice recognition and traffic information, adaptive cruise control, rearview camera, rear-obstacle detection, and DVD entertainment. A top-line GT fitted with every option (including many that are just cosmetic) would come in at about $43,795, but one fitted with only functional options could be had for around $40,000. 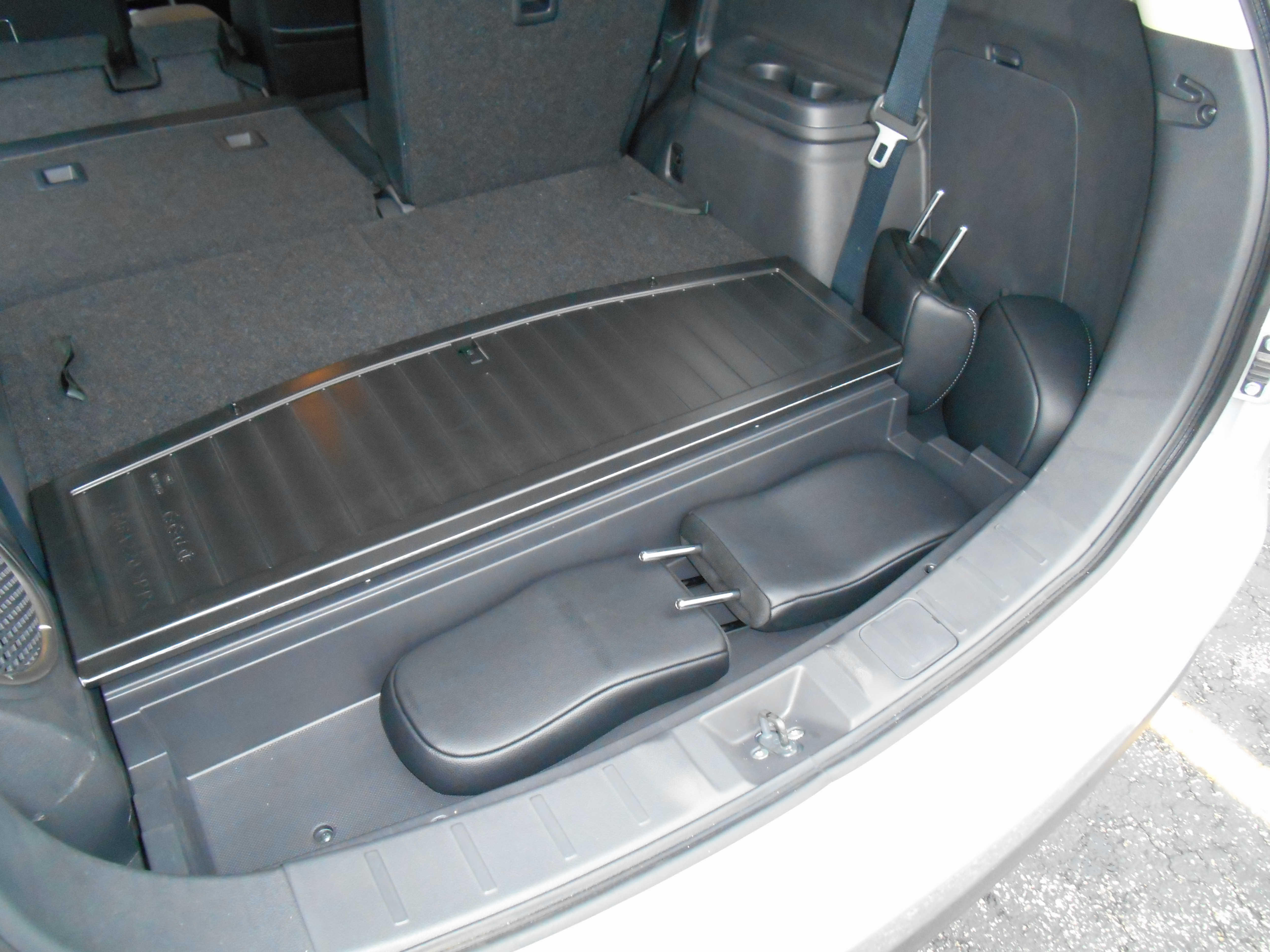 An under-floor storage bin beneath the cargo floor can hold the third-row headrests, while those from the second row can be squeezed into a side bin.

Granted, that’s a bunch for a compact SUV, but it would include features only high-end luxury cars offered just a few years ago. As such, the Outlander spans a broad price range, appealing to a wide variety of buyers along the way. We’ll see whether that’s enough to make it a first-string player in a very competitive field. 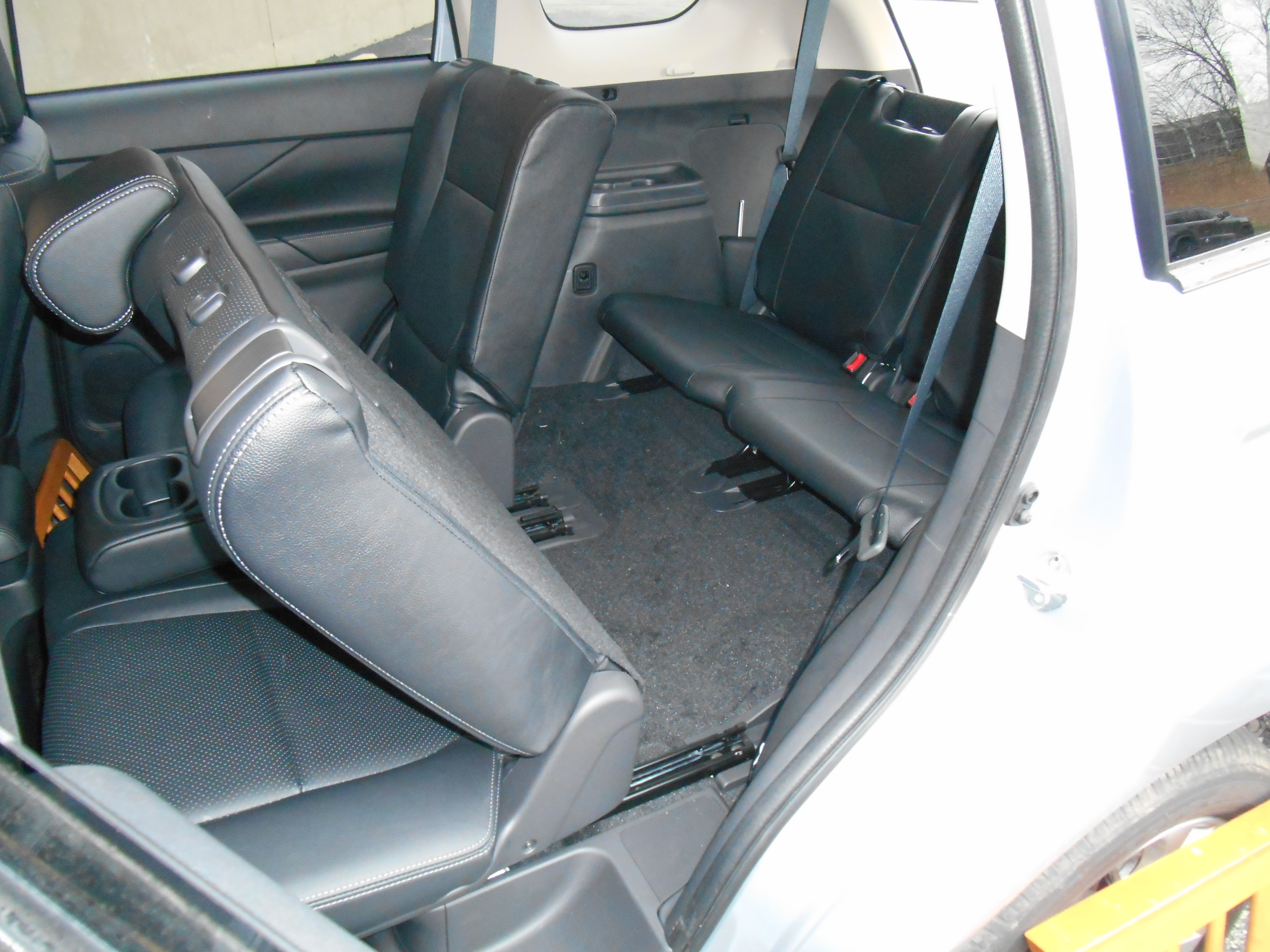 The second-row seat slides forward easily to allow access to the third row, which is best suited to those who are under 5’9 — and fairly limber.