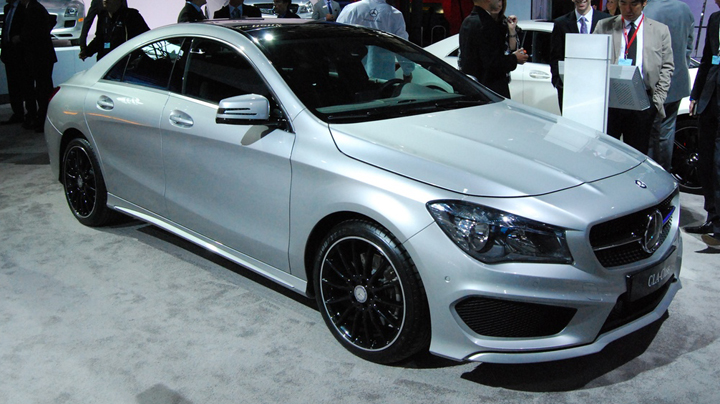 As the 2014 Mercedes-Benz CLA-Class approaches its on-sale date, the German manufacturer unleashed its high-performance sibling at the 2013 New York Auto Show.

The CLA-Class is Mercedes’ new entry-level car. Think of it as a pint-sized CLS-Class, and you have the general idea. The first models to reach our shores will be front-wheel drive and powered by a 2.0-liter turbocharged 4-cylinder engine with 208 horsepower.

As with its other cars, the AMG-tuned edition of the CLA will make its conventional sibling seem absolutely pedestrian in comparison. The 2014 Mercedes-Benz CLA45 AMG will also have a 2.0-liter turbocharged 4-cylinder engine, but massaged to 355 horsepower. Thankfully, AMG engineers are pairing this engine with a specially tuned version of Mercedes’ 4MATIC all-wheel drive (imagine trying to channel that much power through the front wheels alone). The sole transmission is an AMG-designed 7-speed dual-clutch automated manual. Expect a 0-60-mph acceleration time of 4.5 seconds with a top speed of 155 mph.

CG Says: The CLA45 AMG looks great and should go like crazy. That’s all well and good, but what really has us whetting our whistle is the gorgeous A45 AMG, which the company launched at this year’s Geneva Motor Show. The A45 lends its basic design to the CLA-Class but is a 4-door hatchback rather than the “4-door coupe” you see here. We think the A45 looks much better. There are no current plans to bring that car, or any other A-Class, to the U.S. right now. It might depend on how well (or poorly) the CLA-Class sells. Hopefully, we’ll see it at some point in the near future.