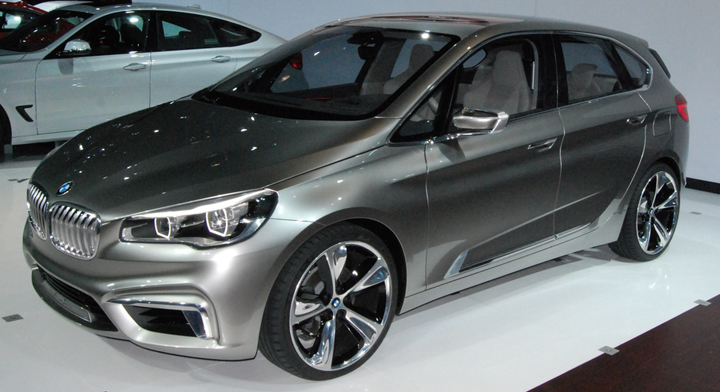 Three BMW vehicles are making their first appearances in the United States at the 2013 New York Auto Show. The company is also announcing some major updates to its ConnectedDrive telematics suite.

The trio of vehicles includes one concept and two production cars. The “pie in the sky” vehicle is the Concept Active Tourer. This small wagon pairs a plug-in electric motor with a 3-cylinder gasoline engine that BMW says will achieve a combined 95 mpg. The roof is made of a composite glass panel that allows users to darken or lighten its tinting with the push of a button. It’s a similar concept to the MAGIC SKY roof found on the Mercedes-Benz SL-Class and SLK-Class convertibles.

Those interested in more “realistic” vehicles can check out the 2014 BMW 3-Series Gran Turismo. This 4-door fastback has a longer wheelbase than its sedan counterpart, which allows for more passenger and cargo room. Think of this car as a shrunken version of the brand’s 5-Series Gran Turismo. Powertrains will come from the 3-Series sedan and include a 2.0-liter turbocharged 4-cylinder and 3.0-liter turbocharged inline 6-cylinder. Though not specifically mentioned, we would expect this car to offer the choice of rear-wheel drive or BMW’s xDrive all-wheel drive. The 2014 BMW 3-Series Gran Turismo goes on sale in late summer, with pricing to be announced closer to that time.

Arguably the most exciting debut for BMW is the 2014 328d, which marks the return of a diesel-powered 3-Series sedan to North American shores. The 2.0-liter 4-cylinder motor will produce 180 horsepower and a massive 280 pound-feet of torque. BMW predicts a 0-60-mph run of 7.2 seconds and highway fuel economy in excess of 40 mpg.

On the connectivity front, BMW will be the first automaker to offer a built-in 4G LTE mobile hotspot, providing high-speed wireless Internet service on the go. The company also announced some new enhancements to its ConnectedDrive telematics. Most of the company’s 2014 models will include the new BMW Assist eCall, which provides automatic crash notification. BMW TeleService can alert both the vehicle’s owner and local dealership when the car needs maintenance. These services are standard for 10 years.

BMW is also planning tighter integration of iPhone apps in its cars. Soon users will be able to stream audio via Audible, Rhapsody, and TuneIn. Drivers can also share their locations with others via the Glympse GPS app.

The company plans to roll out these services on most of its 2014 product line.

CG Says: BMW’s 2013 New York Auto Show exhibit runs the full gamut from pipe dream to production. The Concept Active Tourer could very well get the green light and be sold under BMW’s electric “i” brand. The larger 5-Series Gran Turismo hasn’t exactly been lighting up the sales charts here in the U.S., so we’re not exactly sure why BMW wants to sell a smaller version of that car here. We’re much more enthusiastic about the 328d. The last diesel 3-Series, the 335d, was an absolute road rocket. While the 328 won’t be as fast, the smaller, lighter engine should make the car more fun to toss. We are eagerly anticipating our first spin behind the wheel.