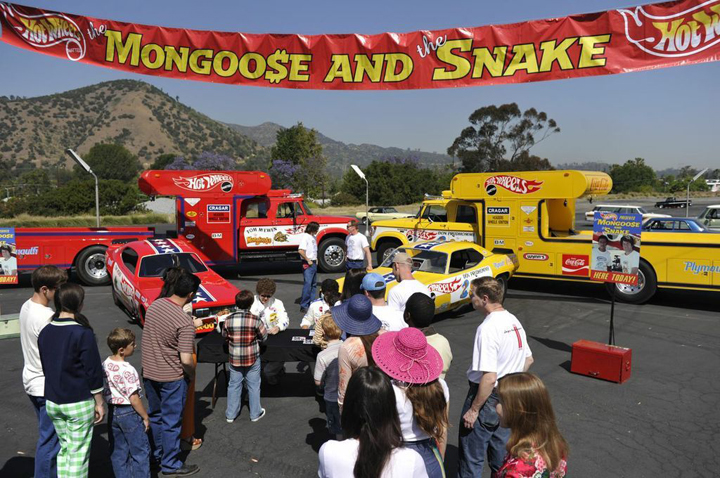 The cars and haulers of Tom “The Mongoose” McEwen (red) and Don “The Snake” Prudhomme (yellow).

Some of the graying—or maybe balding—ex-children who once imagined their favorite toys coming to life will soon get a chance to see what that would have been like. The legendary 1970s “Snake” and “Mongoose” Plymouth funny car dragsters—famously rendered in miniature as coveted Hot Wheels toys—will make a short tour in the U.S. in August and September.

The two fiberglass-bodied flip-top funny cars, which depict a yellow Barracuda that was driven by Don “The Snake” Prudhomme in match races against a red Duster piloted by Tom “The Mongoose” McEwen, are being shown by collector-car auction house Barrett-Jackson and by the producers of the upcoming film Snake and Mongoose. The cars and their matching Dodge flatbed haulers will first be on display August 8-10 at the Reno-Sparks Convention Center in Reno, Nevada, site of a Barrett-Jackson auction held in conjunction with the annual Hot August Nights automotive festival.

From there, the vehicles will head to suburban Detroit, where they will be shown in the parking lot of the Palladium 12-Downtown theater in Birmingham, Michigan, August 13-18—in time for the 2013 Woodward Dream Cruise, which will take place on the area’s famous Woodward Avenue on August 17. The dragsters and haulers will next be seen in Indianapolis at an August 29 benefit screening of Snake and Mongoose and will be on the grounds of Indianapolis Raceway Park during the National Hot Rod Association’s U.S. Nationals drag races August 30 to September 2.

The final stop on the display tour will be Las Vegas, where the vehicles will be at the Mandalay Bay resort while Barrett-Jackson conducts an auction there September 26-28. The Snake and Mongoose cars and haulers will themselves go on the block at the auctioneer’s 43rd annual sale in Scottsdale, Arizona, in January 2014.

Prudhomme has restored both race cars and their support vehicles. They are artifacts not only of a friendly yet competitive on-track rivalry, but also of a significant moment in drag racing’s history. Prudhomme and Tom McEwen had already squared off a number of times in memorable quarter-mile showdowns—their nicknames played off an age-old life-or-death competition from the animal kingdom—before McEwen approached toymaker Mattel for an unprecedented sponsorship deal. From 1970 to ’72, the celebrated duo (both are listed among the 50 most significant drivers of the NHRA’s first 50 years) came to the lights against each other in funny cars that prominently bore the logo of the Hot Wheels brand of 1/64-scale metal toy cars. Meanwhile, Mattel cranked out scores of tiny Snake and Mongoose cars that helped make Prudhomme and McEwen household names with a whole new generation of fans. The Hot Wheels sponsorship was drag racing’s first from outside the automotive realm, an innovative cross-promotion that broke new ground in sports marketing. 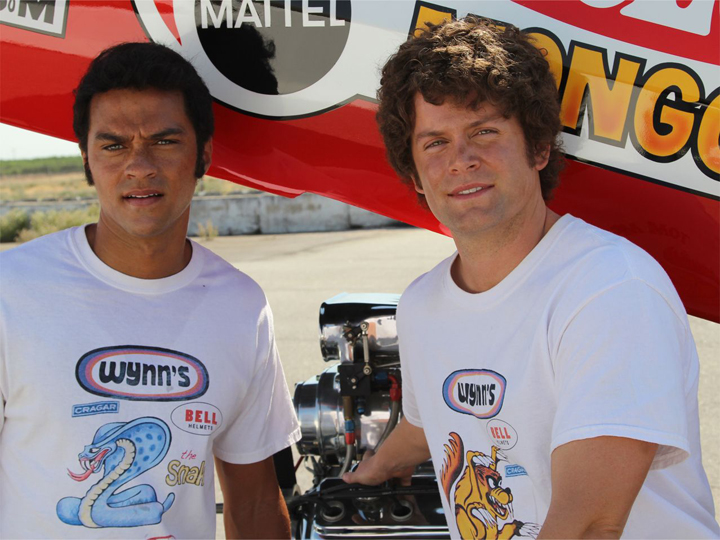 Actors Jesse Williams (left) and Richard Blake (right) star as Prudhomme and McEwen, respectively, in the movie “Snake and Mongoose,” which opens in select theaters on September 6, 2013.