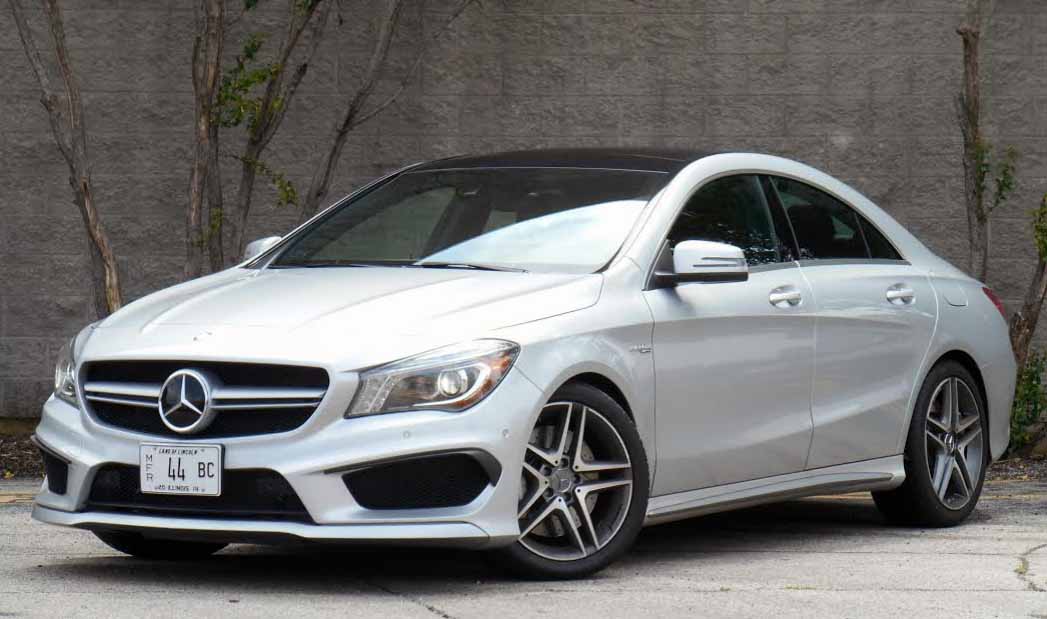 The good: Frugal with gas, given the power

The not so good: Frustrating transmission behavior compromises low-speed refinement

Normally, you see the names “Mercedes” and “AMG” together, and it really doesn’t matter what combination of letters and numbers fall between; you’re going to enjoy the ride. But the Mercedes CLA 45 AMG just didn’t impress me as much as its ancestors had me expecting.

Oddly, this was my first drive in Mercedes’ new front-drive compact sedan (though in AMG45 guise the CLA boasts AWD), and I’m not sure it was the best way to be introduced. While some observations would apply to any version, many that were negative related to the performance-intended drivetrain.

Although I can see this car being awesome on a track, it just didn’t seem happy trolling along at more pedestrian speeds … at least, not pedestrian speeds as encountered on my Chicagoland commute. Pavement imperfections caused some sharp suspension reactions, though the ride quality wasn’t what I’d categorize as “harsh”–more like, “aggressively firm.” Not surprisingly, handling was impressively agile, a trade-off that would probably be expected in a car with this kind of sporting pedigree.

But my real problem was with the drivetrain.

Let’s start from a stop. If the engine shut down due to the fuel-saving stop/start function, it took a rather long time for it to restart and have the car begin moving forward after taking your foot off the brake and hitting the gas, though it was certainly smooth through the drawn-out process. What wasn’t smooth was power delivery. Under brisk acceleration, there was about a normal amount of turbo lag, as power would come on about halfway across an intersection. And it came on hard. But it didn’t come on linearly, which made for some surging that under some circumstances was a concern. Furthermore, when the throttle was stabbed at speed, it took a fair amount of time for the transmission to downshift – though when it did, the car really took off. Finally, slowing to a stop caused some slightly jerky downshifts and an unseemly clunk from under the car. On a racetrack, where the engine would typically be spinning at 3000+ rpm and you’d either be heavy on the gas or heavy on the brakes, none of this would likely be noticed. And the rather prodigious power available would probably make you forget about it anyway. But in a normal commute, there are just not enough opportunities for the pluses to overcome the minuses. 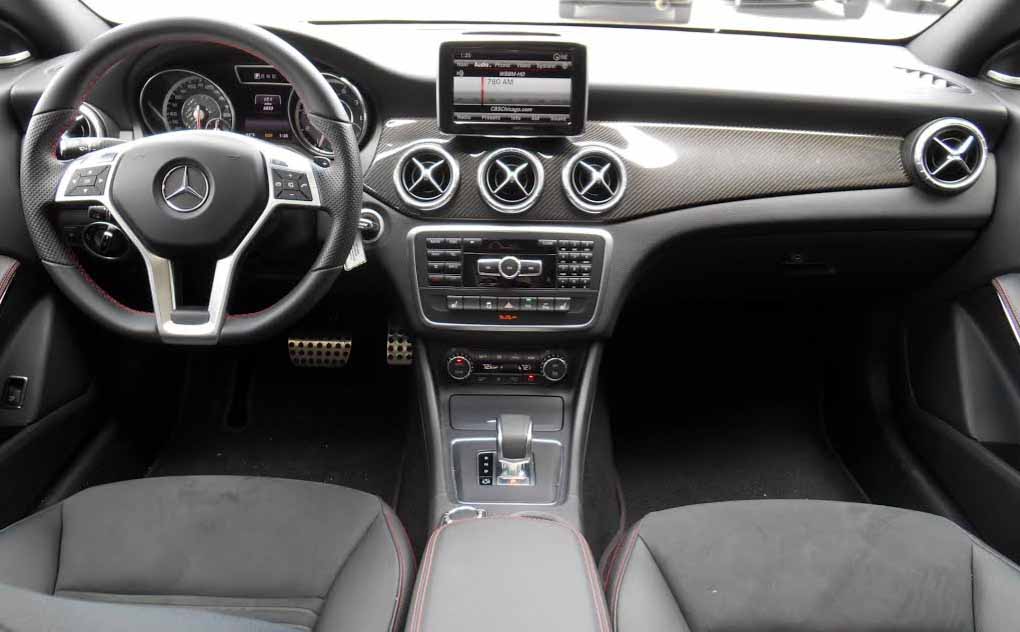 Our test car’s cabin seemed appropriately appointed for a car approaching $40,000. Unfortunately, our test car listed for a cool $54,525.

Inside, materials about match the CLA’s sub-$30,000 base price, but seem just bit out of place on our much costlier tester. The dashtop was nicely padded, but padding on the doortops – if that was indeed padding – was thin to say the least. Accenting the black interior were brushed-aluminum and carbon-fiber trim pieces, which looked the part of the performance car this is.

Visibility was quite good to the front and rear corners, but thick roof pillars blocked a lot over the shoulder. Interior storage space is a bit skimpy, and passenger space is downright tight; I could barely fit in the rear seat behind the front seat set for my 5’9 self. The trunk is wide at the back and roomy enough, and there’s a good amount of under-floor storage, but sickle-shaped hinges intrude at the upper corners. When the rear seat backs are folded, there’s a large opening into the cabin, but the seat backs rest about 3 inches above the level of the cargo floor, so you can’t easily slide large items all the way in. 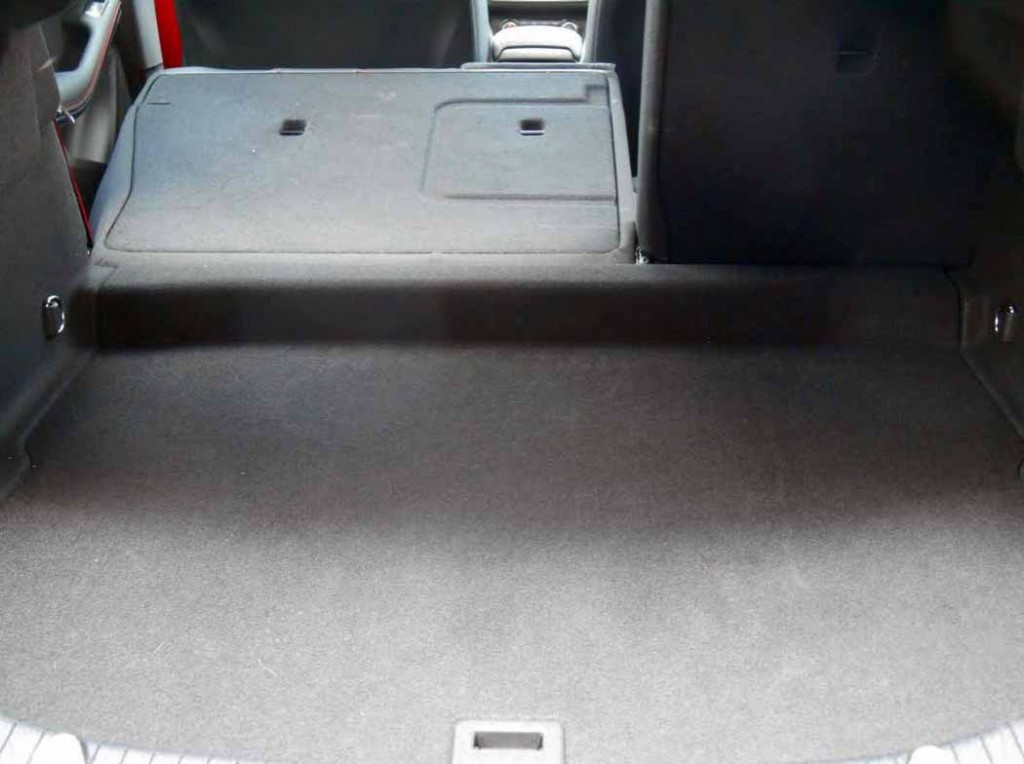 The CLA boasts a surprisingly roomy cargo hold. The rear seat backs fold flat, but not flush with the load floor.

Perhaps the fact that I got into the 45 AMG expecting to be impressed ended up worked against it. Furthermore, if my first impression had come at a racetrack – where it indeed was during our regional press club’s Spring Rally in May – my early expectations might have been fulfilled. But as a commuter car, it seems out of place. Without doubt, it’s a great formula; it’s just that the ingredients need a little more polish.

I agree with Rick regarding the CLA45’s low-speed drivability issues, but I came away from this car much more impressed than he did. First, once at speed, the CLA45 is a joy to drive. The car is fast, agile, and the steering and brakes are wonderful. Second, for such a small car, there’s all sorts of front-seat space for larger drivers, even this author. That said, the tiny front-door openings seriously confound entry and exit.

Early sales numbers suggest that the CLA is a success for Mercedes, and I understand why. In more modest 250 trim, the CLA is a smart-looking near-luxury ride that serves up genuine style with a solidly European on-road experience. And while it’s cool that Mercedes was able to coax 355 horsepower from the CLA45’s 2.0-liter engine, driving this car in traffic is mostly just annoying. I say leave the AMG to the boy racers, and test drive a CLA250 with the nifty Panorama Roof.

The romantic story behind the Mercedes-Benz star logo