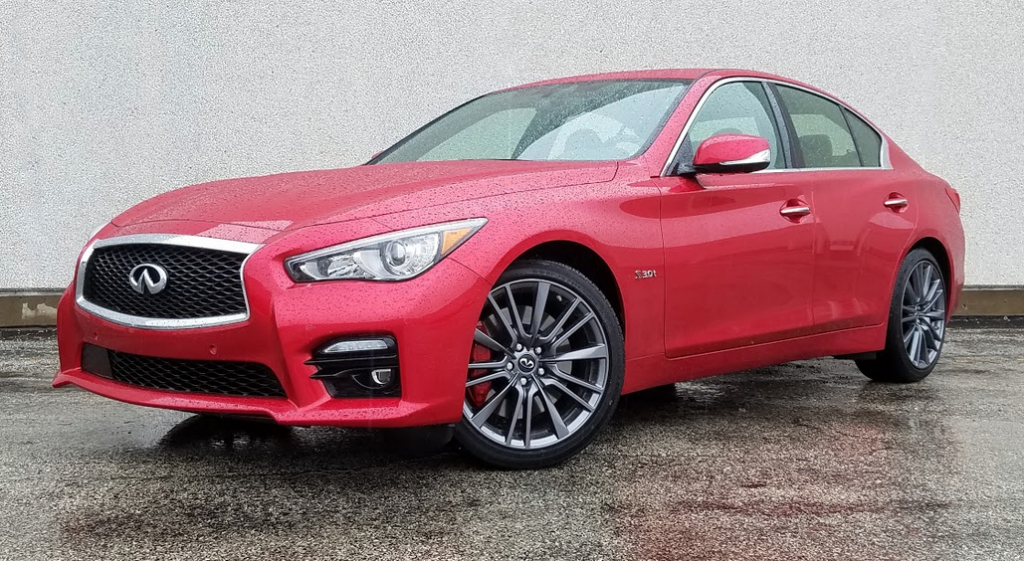 The good: Cabin fit and finish

The not so good: Observed fuel economy 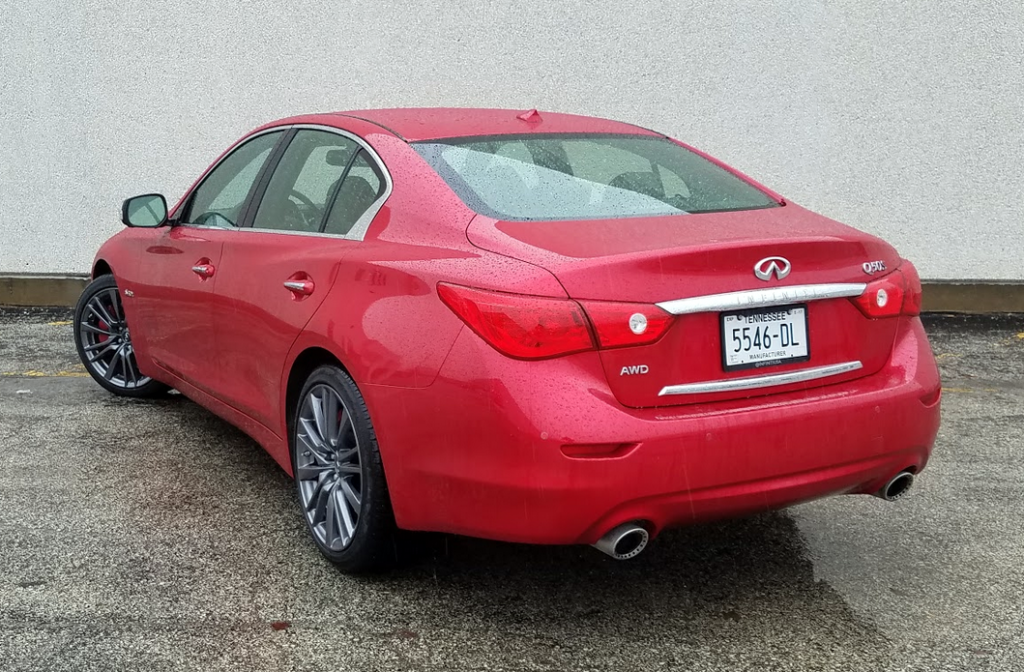 As line-topping performance models go, the Red Sport 400 is a bit of a sleeper compared to some of its competitors–Infiniti elected to forego aggressive front/rear fasciae, pronounced ground effects, and spoilers.

The Red Sport is the top of Infiniti’s family of rear- and all-wheel-drive premium-midsize sedans. Its signature feature—it’s right there in the name—is a 400-horsepower version of the Q50’s 3.0-liter twin-turbocharger V6 engine. Exclusive 19-inch alloy wheels shod with performance tires, a specific exhaust-tip design, red-painted brake calipers, and red “S” badges (for “sport” no doubt) are visual cues that distinguish the Red Sport from the Q50 3.0t Sport that makes do with 300 horsepower.

The Q50 cabin is nicely finished, especially when equipped with the optional Design Package and Maple Wood Trim Package. Passenger space is good for average-sized adults in front, but a bit stingy for grown-ups in the back seat.

The extra 100 horses, channeled through a 7-speed automatic transmission, make the Red Sport an undeniably swift sedan. A quick and determined downshift spurs lusty expressway passing capability, and 350 lb-ft of torque that enters its peak at less than 2000 rpm enables prompt push from standing starts. Most of this is done fairly quietly but exhaust noise gets somewhat rumbly as acceleration gets to elevated levels. 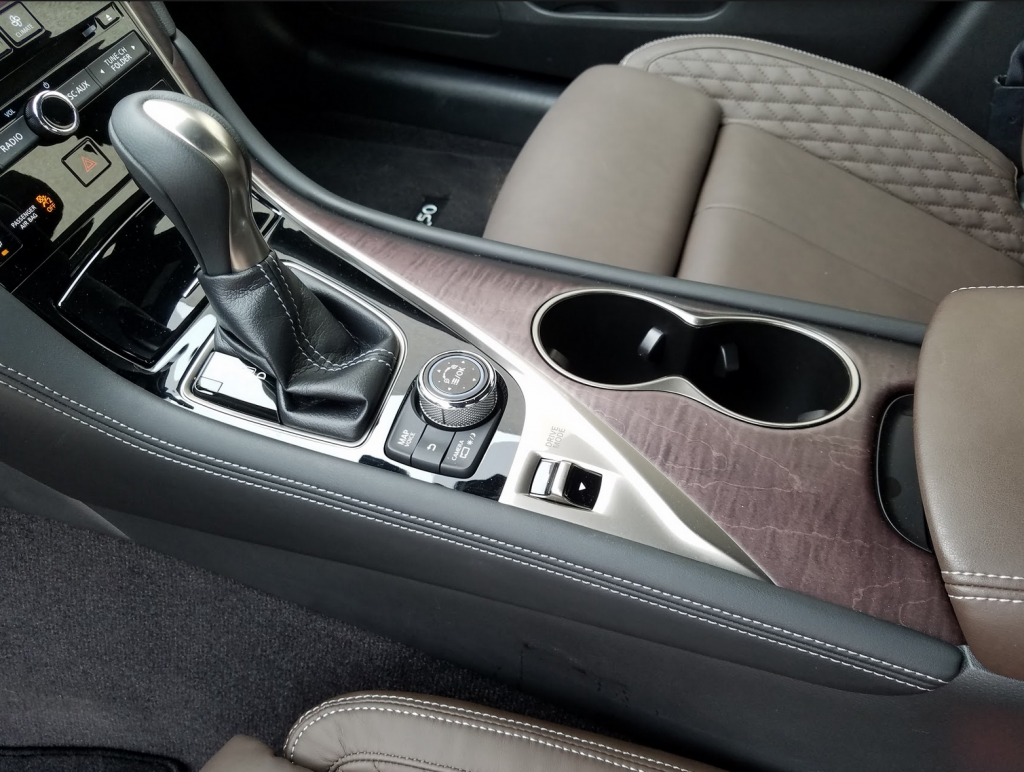 Selectable drive modes modify engine and suspension behavior. “Sport” and “Sport+” deliver a freer flow of power and crisper gear shifts. An “Eco” mode reins in the horses and is best left for in-town driving. Operating mostly in the “Standard” setting, this driver averaged an unremarkable 17.1 mpg from a test stint of 127.6 miles that included 70 percent city-style driving. The EPA city-mileage estimate for the Red Sport AWD is 19 mpg.

Clicked into Standard, there’s an excellent degree of ride comfort from the electronically monitored Dynamic Digital Suspension that is standard on 3.0t Sport and Red Sport 400 models. Moving into the Sport modes changes the suspension’s damping characteristics and firms up the ride a bit, allowing more road-surface irregularities to make themselves felt. Note that AWD Red Sports have 9-inch-wide wheels front and rear while the rims on rear-drive jobs are 9.5 inches across. The test car was equipped with “steer-by-wire” Direct Adaptive Steering, a $1000 option. It does away with a mechanical connection between the steering wheel and the front wheels (except in the event of electronic failure), and changes the steering ratio and effort. All in all, steering and handling are very good.

This driver settled in comfortably behind the wheel, especially when he pulled out the seat-cushion extender to provide more leg support. The standard moonroof takes up some overhead space but headroom didn’t feel as it were in short supply. The situation is a little different in back, however. Adult legroom is passable—passengers can sit comfortably but only just so—and the roof slope brings heads closer to the headliner. A high, square floor hump effectively limits capacity to two full-grown occupants. 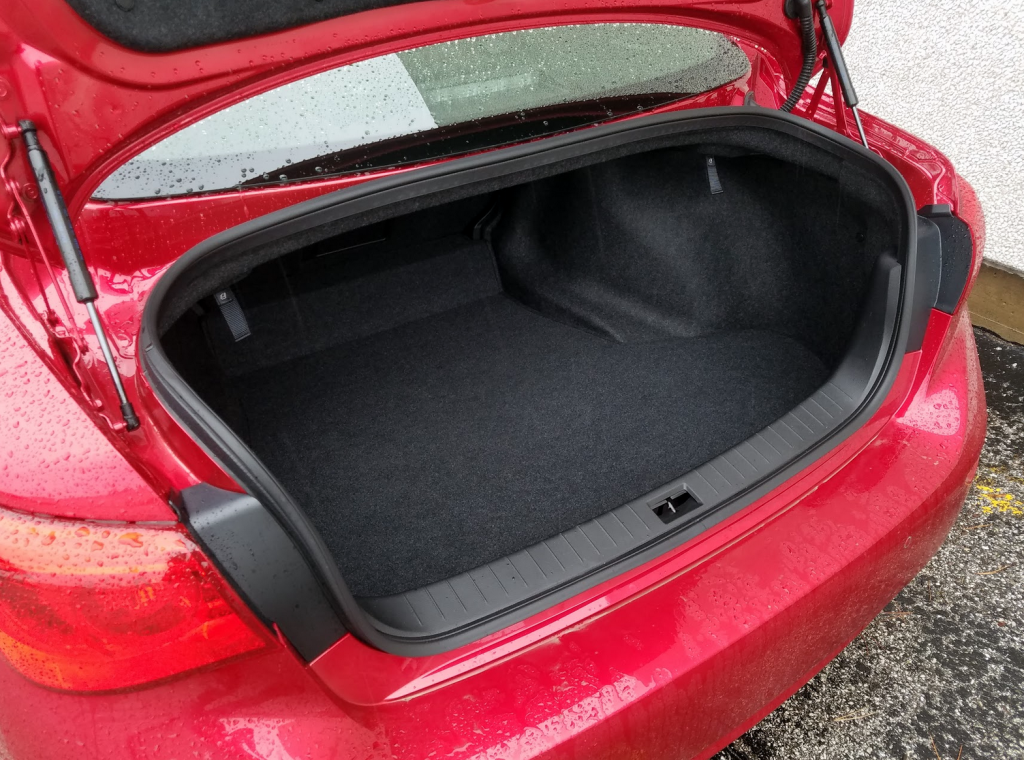 Wheel-arch intrusions compromise the utility of the otherwise nicely sized and shaped trunk.

Interior storage for personal items is so-so. Glove-box volume is passable, and the modest space in the covered console box cedes some of its area to a block that holds an auxiliary jack and USB port. There are two uncovered cup holders in the console and two more in the pull-down central armrest in the back seat. Short door pockets with bottle holders serve front passengers but there are no such slots in the rear doors, just pouches on the backs of front seats.

The trunk floor is wide at the back but narrows considerably between the wheelhouses. It isn’t particularly deep front to back, either. Rear seats fold in a 60/40 split to add cargo space but there is a distinct step several inches high at the point where the trunk reaches the seats, so straight-through loading of longer objects will take some work. A pass-through is provided in the middle of the seat backrest.

Cabin trim and materials do a good job of living up to luxury-brand expectations. Red Sports come with leather upholstery and aluminum interior trim as standard equipment but the test car was enhanced with quilted semi-aniline leather seats and matte-finish maple accents on the console and doors, both of which are included in the Design Package option. Soft, padded surfaces were amply distributed over the dashboard, door panels, and upper portions of the center console.

The control layout is similar to the one CG editors experienced in the related Q60 coupe. Main gauges and the configurable central information display show up well. At the center of the dash are two screens. The upper one is the viewer for the standard rearview camera, and displays the map for the optional navigation system (with scale adjusted by a dial on the center console). The lower one displays audio, climate, and other systems. As in the coupe, function buttons for the dual-zone climate system run down the right and left sides of this screen, and right-side buttons are a little difficult to see at a glance and reach by driver. Temperature is set by repetitive-push “warmer” and “cooler” buttons—which aren’t as readily convenient as twist knobs.

Other key standard features include a leather-wrapped steering wheel, LED headlights, heated exterior mirrors with integral LED turn signals, push-button starting, 8-way power front seats with driver’s-seat memory, power tilt/telescoping steering column, Bluetooth phone and streaming-audio connectivity, Bose 16-speaker audio system with voice recognition, and satellite radio. An extensive suite of electronic safety alerts and driving aids is available via a pair of option groups, and further luxuries like heated seats and steering wheel also come in a big-ticket package. Depending on your expectations of what should be built in to a luxury car, that might have you seeing red, sport.