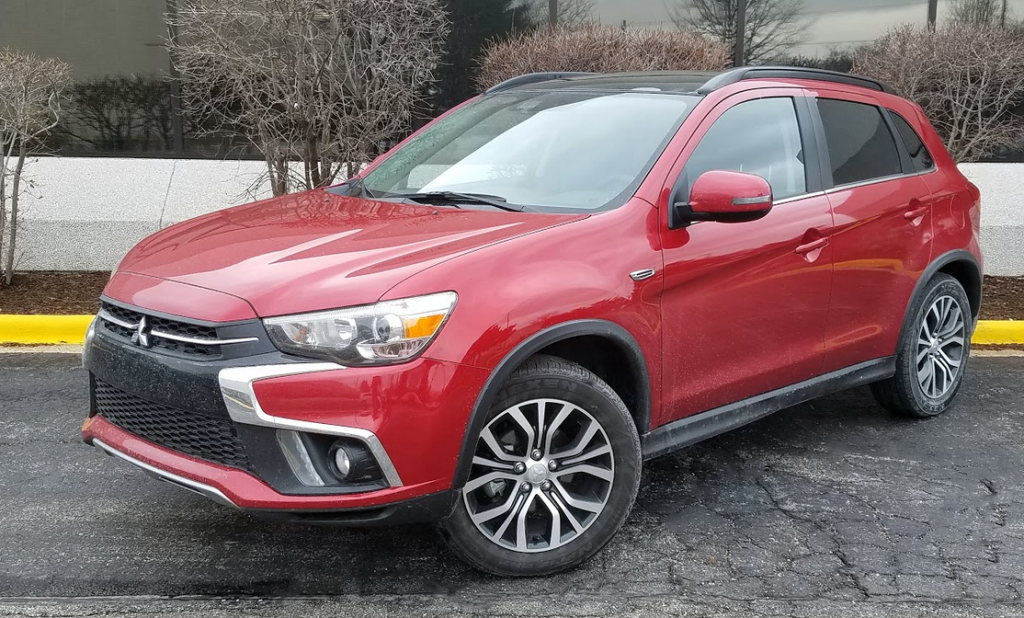 The not so good: Powertrain refinement and cabin finish trail the class

Mitsubishi has done a bit of work on its Outlander Sport subcompact-crossover SUV for 2018. It has revised the external styling somewhat, introduced a new console design inside, reduced the number of trim levels, and brought additional technology features to bear. However, it’s still a little rough around the edges, so its greatest virtue remains a very manageable price. 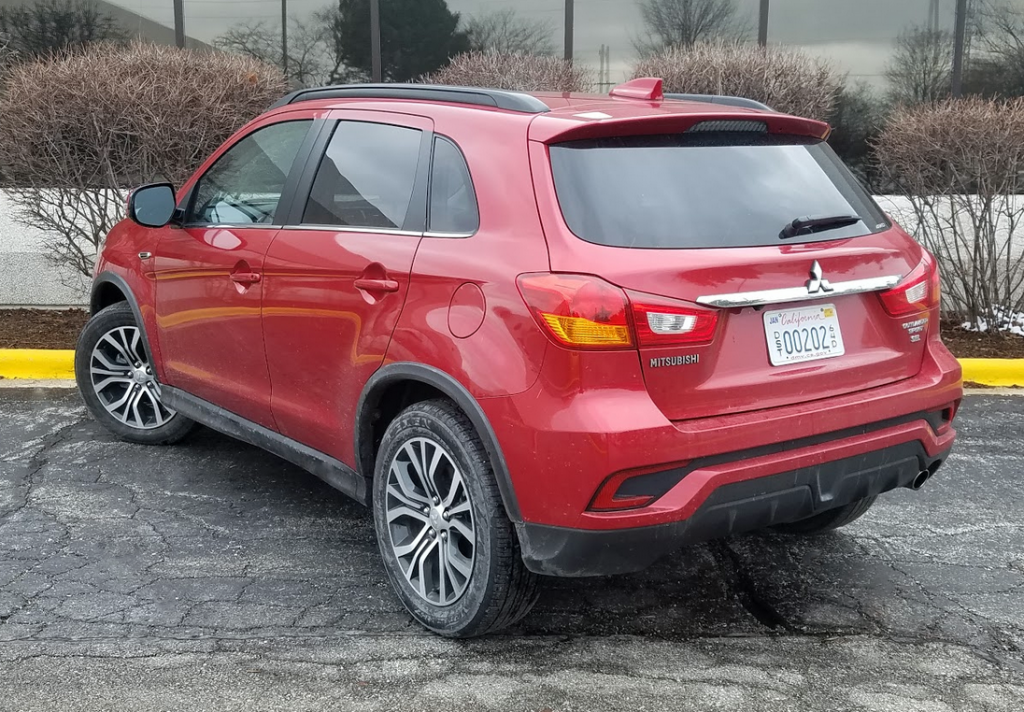 Consumer Guide® tried out an all-wheel-drive SEL, the cream of the crop among Outlander Sports. (Gone is the former line-topping GT.) Base price with delivery is $26,835, but even with an option package containing newly available forward-collision mitigation and lane-departure warning, plus an extra-cost cargo cover and accessory floor mats, the total bill came up $890 shy of $30,000.

That money secures a fair amount of stuff that we’ll get to in a bit, but it can’t buy powertrain polish. The SEL gets the bigger of the two available Outlander Sport engines, a naturally aspirated 2.4-liter 4-cylinder that produces 168 horsepower. This carryover engine continues to be matched with an automatic continuously variable transmission (CVT), though the CVT has been reworked for ’18. Mitsubishi claims it is quieter with improved acceleration characteristics. While not outright sluggish, the 2.4 isn’t really a deep well of power either. It doesn’t dawdle from standing starts but it works—somewhat noisily—to build speed in determined acceleration or maintain it on the open road. Fuel-mileage estimates from the EPA are 23 mpg in the city, 28 on the highway, and 25 combined. Our own mileage was in step with these numbers; we averaged 24.6 mpg with a slight majority of highway driving.

The Outlander Sport is a step behind most class competitors in terms of overall cabin refinement, but the interior is decently spacious considering the small exterior dimensions. Rear-seat space is adequate for adults; the headroom is a bit stingy, but legroom is sufficient, at least if the front seats aren’t adjusted all the way back.

Ride and handling are generally good. There’s a little tippiness in corners, and instances of impact harshness and rear hop when encountering substantial road cracks. All Outlander Sports come with a choice of front-wheel or all-wheel drive. The latter use Mitsubishi’s electronically controlled “All-Wheel Control” that continually monitors road conditions and transfers power and braking to the wheels with the most traction. It can be locked into all-wheel operation via a push button on the console. 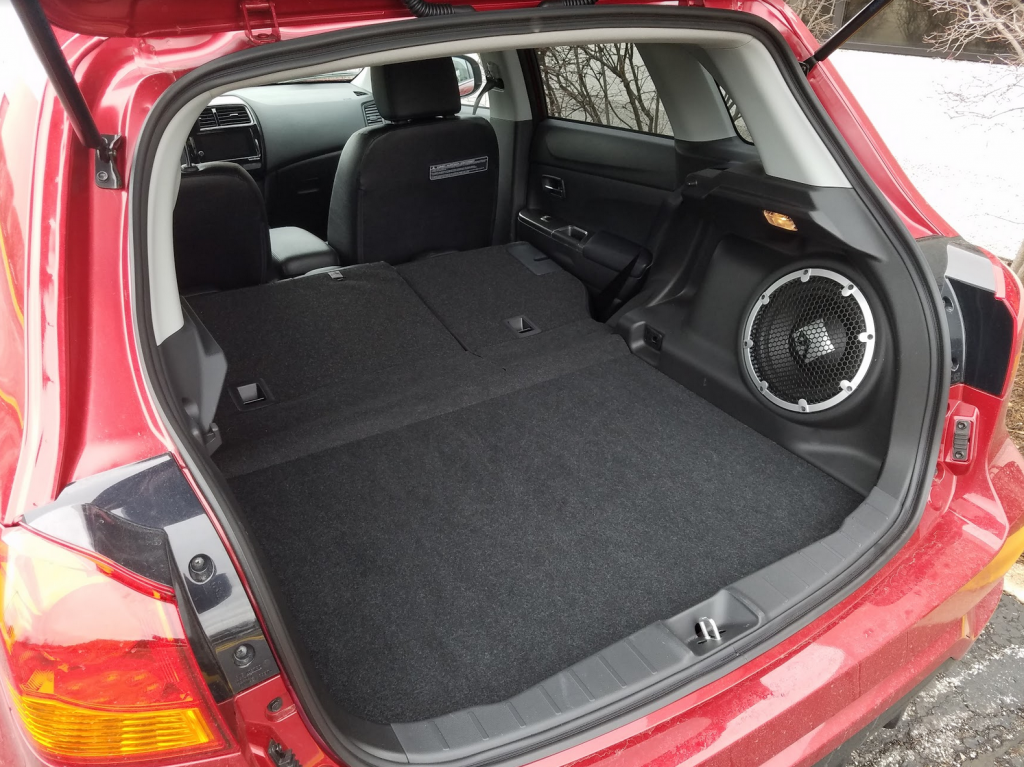 The rear cargo area measures 21.7 cubic feet behind the second-row seats, and 49.5 cu. ft. with the rear seat backs folded.

How does the SEL pack in all those things and still keep the price low? There’s some evidence of cost-cutting here and there. Seat leather doesn’t have the richest look and feel. While slightly spongy material covers the face of the dash and the top of front doors, and soft-touch surfaces drape the armrests where an elbow is likely to rest, there are large expanses of hard plastic. (However, padded areas on the sides of the bright-trimmed console are a nice and unexpected touch for the price.)

There’s decent passenger room in front, even under the panoramic sunroof that was included in the Touring Package option. The second row has a little less headroom, but adequate legroom for adults, and space enough for three across in a pinch. Rear seat backs are on the upright side. At highway speeds there is perceptible road and wind noise. Gauges are large and legible; controls are easy to reach and operate. Finding and saving audio presets on the display screen is direct and intuitive. Climate control with automatic air conditioning is regulated via three handy dials.

Personal-item storage in the front row is managed by a glove box, a covered console box (with a power point and USB port inside), a small open space under the dash, two open cup holders in the console, and door pockets with bottle holders. Second-row storage is considerably more limited, however: a pouch on the back of the driver’s seat and twin cup holders in the pull-down center armrest.

The Outlander Sport’s subcompact dimensions mean cargo room isn’t so great until the 60/40-split second-row seats are folded. The seats do fold very nearly flat, and with an uninterrupted connection to the cargo floor. The cargo area is lighted, and has tie-down hooks and a bin to hold small items on the left side—though the 10-inch subwoofer on the right, a component of the optional Rockford Fosgate premium audio system, cuts into the available load space.

Mitsubishi’s Outlander Sport may not be the pinnacle of the small-SUV world in terms of overall execution, but it’s still fairly useful, and easy to maneuver. Factor in how little one can cost, especially if you don’t need all-wheel drive or can get on without too many options, and it’s got genuine value.

The bobtailed Outlander Sport is the smallest crossover SUV in Mitsubishi’s lineup, slotting in under the new-for-2018 Eclipse Cross. Though it can be a compelling value when lightly optioned, the Outlander Sport is outclassed by most of its class competitors in fit and finish, overall noise levels, and powertrain refinement.