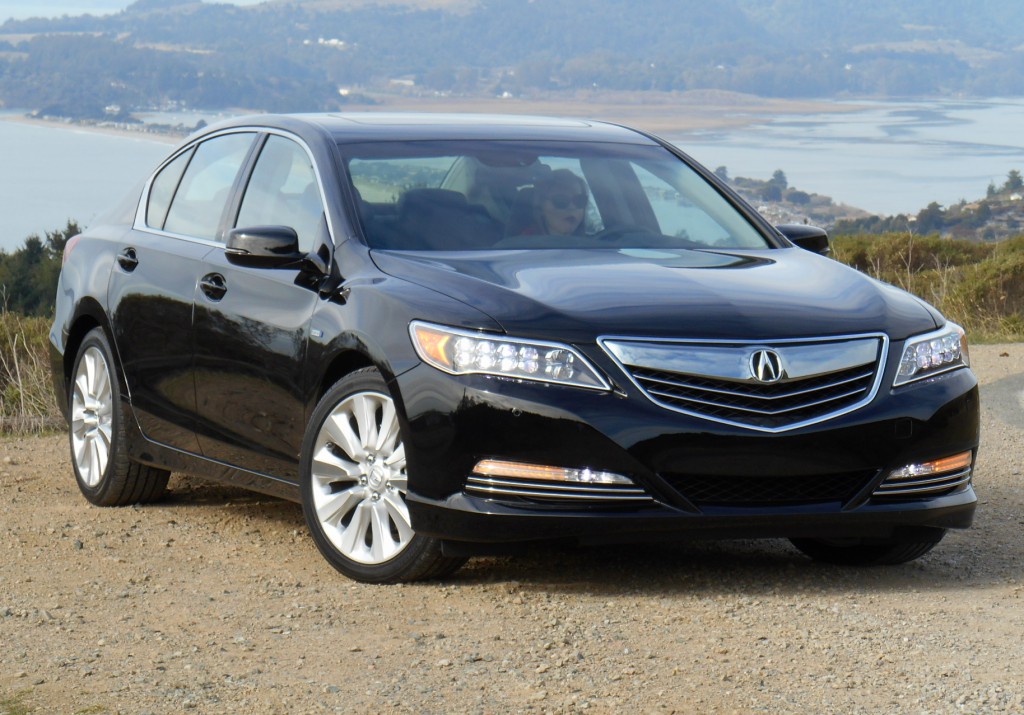 The new-for-2014 Acura RLX is now joined by the RLX Sport Hybrid.

Even the name sounds high-tech. And when the Acura RLX Sport Hybrid SH-AWD goes on sale in the first quarter of 2014, more than a few buyers might find themselves dazed and confused by the car’s technology. And that’s just the mechanical bits.

What that string of words and acronyms means is that Acura’s flagship sedan, which was redesigned earlier this year and rechristened “RLX” (previously just “RL”), has not only gained a hybrid sibling, but a performance-oriented Sport Hybrid sibling. And it seems to live up to its name.

For the past several model years, Acura’s flagship sedan carried the RL model designation and came standard with all-wheel drive. Both changed when the redesigned car appeared last spring as the RLX, which came only with front-wheel drive. But the upcoming RLX Sport Hybrid adds mechanical pieces that bring both all-wheel-drive traction and hybrid fuel economy at the same time. 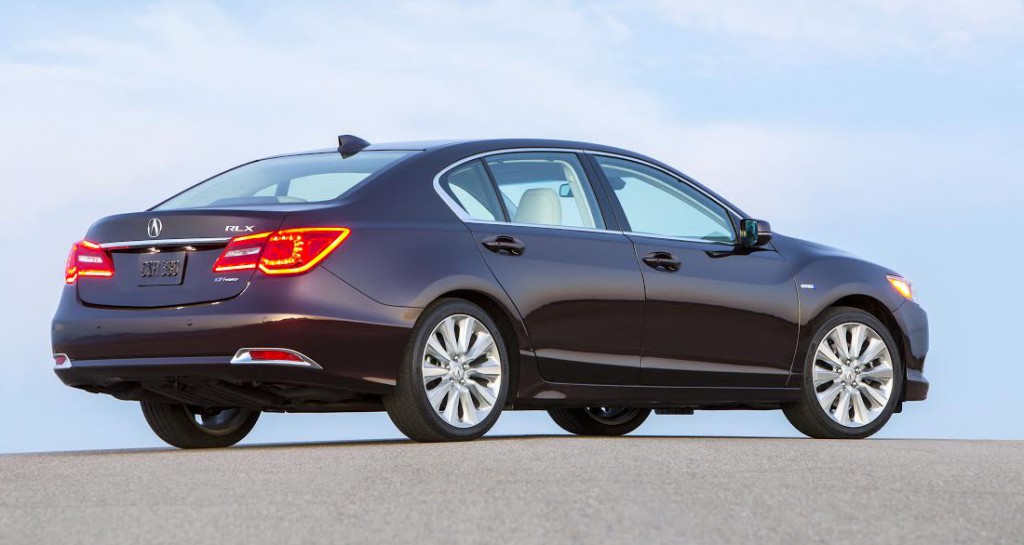 The Sport Hybrid’s rear wheels are driven exclusively by a pair of 36-horsepower electric motors. A separate 47-horsepower motor augments the gas engine up front.

While both the RLX and the RLX Sport Hybrid use the same 310-horsepower 3.5-liter V6, that’s where the powertrain similarities end. In the RLX, the V6 is mated to a conventional 6-speed automatic transmission that drives the front wheels. In the RLX Sport Hybrid, however, the engine mates to a 7-speed dual-clutch automated-manual transmission that incorporates a 47-hp electric motor/generator. Meanwhile, the rear wheels are driven solely by a pair of 36-hp electric motor/generators, which negates the need for a driveshaft. Acura lists combined peak horsepower at 377. (Because the power curves of the engine and electric motors differ, you can’t just add all the horsepower figures to come up with a peak number.)

Although the intricacies of the powertrain logic would take an hour to describe (and in fact did during our press-preview’s technical presentation), it can be simplified to this: The two rear motors typically accelerate the car from a stop, and once up to speed, the gas engine (driving the front wheels) takes over. Recharging the 1.3-kilowatt-hour battery that powers the motors is done primarily under deceleration, when both the rear motors and the transmission-mounted front motor are turned into generators. (A motor and a generator are mechanically the same; one turns electricity into rotary motion, the other turns rotary motion into electricity.) If that’s not enough to recharge the battery, the transmission-mounted motor—which is driven by the gas engine—is turned into a generator under cruise conditions to help boost the charge level.

Under full throttle, however, it’s all hands on deck. The engine and front (transmission-mounted) motor unleash their full power to drive the front wheels, while the two rear motors drive the rear wheels. This can’t be done indefinitely, however, as the battery doesn’t hold enough of a charge to run the motors for long. (Remember, nothing is recharging the battery in this scenario.) In low-traction situations where all-wheel drive is needed for extended periods, the engine drives both the front wheels and the front generator, the latter of which recharges the battery that’s feeding electricity to the rear-mounted motors.

And then there’s the “SH” part of the equation.

In past Acuras boasting the “SH” (Super Handling) acronym, it meant that power could be sent to the outside driven wheels during cornering to help “steer” the car around the turn. Meanwhile (at least in later models equipped with an antiskid system), the inside rear wheel could be braked to further enhance the turning power, something that all modern cars can do. Trouble is, braking the inside rear wheel wastes energy (not to mention the life of the brake pads), so it’s typically not done unless it’s determined the car is going too fast to make the turn and is about to go out of control.

In the Sport Hybrid’s system, however, it works differently—and far more efficiently. Instead of applying the inside rear brake in a fast turn, the Sport Hybrid switches the inside rear motor into a generator, which creates the necessary drag while producing energy (electricity) rather than wasting it. As a result, it can and is done even in lower-speed turns, which provides a sportier handling feel by making it seem as though the car wants to dive into the corner rather than overshoot it (the latter known as “understeer”). It’s this, in addition to the added power, that justifies the “Sport” element of the moniker. 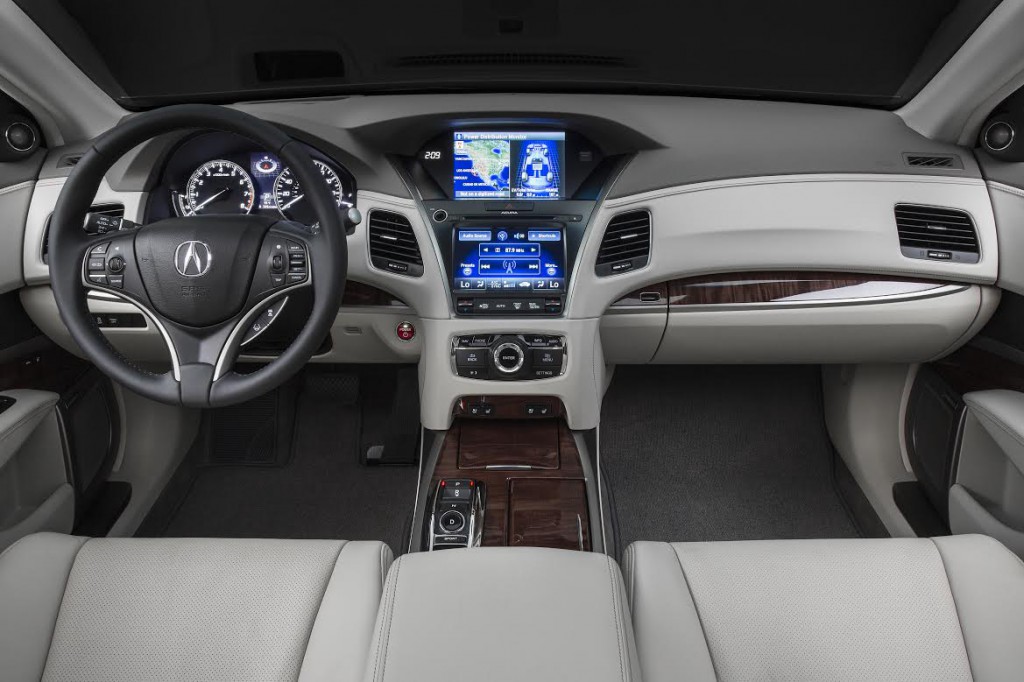 Any RLX boasts plenty of front- and rear-seat passenger space.

What this adds up to is a rather substantial increase in EPA fuel-economy numbers, despite the fact that the hybrid components account for about a 350-pound weight gain. While the front-drive RLX carries a 20 city/31 highway EPA rating, the RLX Sport Hybrid earns a 28 city/32 highway rating. (Obviously, the city number is affected far more than the highway number, which is the case with most hybrids.) That represents a 40-percent increase in the city rating and a 3-percent increase in the highway rating. Remembering that this is in addition to the greater power, better handling, and all-wheel drive traction afforded, that is quite an accomplishment.

But how does it all work? Quite well, certainly, if not quite perfectly.

In normal driving, it’s all quite seamless and transparent. The engine usually shuts off at a stop, and when you accelerate, power initially comes from the rear electric motors. When speed stabilizes and the gas engine kicks in, it’s hardly noticed.

It’s under heavy throttle inputs that things aren’t quite as smooth and rewarding as one might expect. Flooring the gas from a stop results in a rather gentlemanly launch for about the first 20 feet, after which power suddenly comes on strongly. There’s a similar reaction when dipping into the throttle at both city and highway speeds: an instant surge followed about two beats later by a much stronger one. It’s nice that something happens almost immediately, but it’s a bit difficult to modulate power if you’re trying to hit a hole in traffic. On the positive side, a two-stage exhaust that is quiet under most circumstances lets loose with a prominent, vicious growl when the spurs are applied.

By contrast, there are no such reservations regarding the handling. Here, the RLX Sport Hybrid seems not only willing but eager to join in any corner-carving fun, and the ride doesn’t seem to suffer much as a  consequence. The ride is firm, to be sure, but it soaked up most pavement imperfections quite well, and even though we didn’t encounter any Chicago-style potholes on our northern-California test route, a rough patch of pavement didn’t induce a similarly rough reaction. It’s also a quiet ride, both over bumps and at highway speeds.

Inside, the RLX Sport Hybrid is trimmed with the expected luxury materials and boasts substantial amounts of passenger space both front and rear. Visibility is quite good to all directions (aided by a 180-degree rearview camera when backing), and ingress and egress are a breeze. Interior storage rates about average, with a small glovebox, moderate-size console box with USB and 12-volt ports, two covered console cupholders, a covered forward console bin, and the usual map pockets. Less impressive is the trunk. It’s plenty wide at the rear for golf clubs, but it doesn’t go very far forward, as the thick hybrid battery pack rests against the rear seat back. That also means there’s no folding rear seat back to expand the cargo area, or even the ski pass-through found on the “regular” RLX. However, there are a couple of large bins under the trunk floor.

As with other cars in this price class, the RLX Sport Hybrid is loaded with electronic features, both of a safety and convenience/comfort/entertainment nature.

Pricing had not yet been set (or at least, disclosed) at the time of writing, but it’s expected that they’ll start in the mid-to-high $50,000 range, and run up to about $65,000. That’s competitive with other premium all-wheel-drive vehicles in this size and performance class, but none of those competitors can match the RLX Sport Hybrid’s EPA ratings—or the entertainment value in describing how they work.