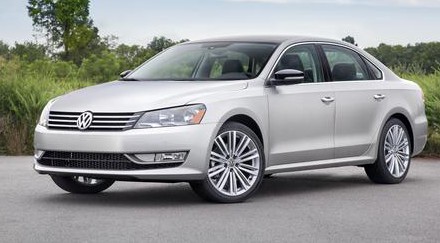 Our test Passat TSI listed for $31,715 in SEL trim, and averaged an impressive 28.5 mpg in an even balance of city and highway driving.

The not so good: Small climate-control buttons

The 2014 Volkswagen Passat is a very accommodating car for people and their associated stuff. Passenger and cargo room abound and, at the SEL Premium level, there are plenty of convenience and luxury features at hand. Performancewise, with the turbocharged TSI 4-cylinder engine, it comes up just short of “thrilling” to drive, but safely within the “lively” circle on a Venn diagram of automotive attributes (providing that anyone used Venn diagrams to evaluate cars, but we digress). 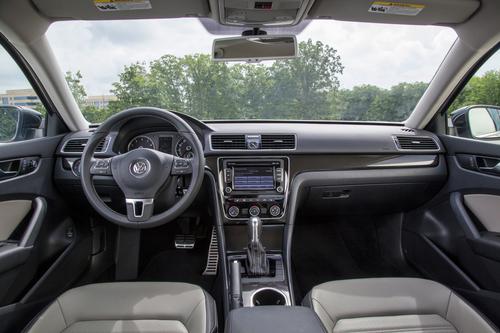 We’re picking nits when we note that the climate control buttons are a little smaller than we’d like.

There’s plenty of stretch-out room for legs, shoulders, elbows, and the like. Heads, too. Rear-seat passengers enjoy exceptional leg room, and can swing in or out of the car with the greatest of ease. Three amicable adults could fit in back if push came to shove—even with the central passenger straddling a driveline tunnel. In addition to the expected cubby and cup holders in the center console, incidental storage is capably handled by a large glove box, big open bins in all doors, and a map pocket in the back of both front seats. A pull-down arm rest in back houses two more cup holders and a shallow covered storage space.

For easy loading, the trunk features a low, wide opening and the trunklid swings way up out of the way. The trunk isn’t especially tall and the plastic-covered gooseneck hinges intrude into the cargo area, but front-to-back space is generous and the flat floor narrows moderately between the wheel houses. There’s further cargo versatility from the 60/40 fold-down rear seats that include a built-in central pass-through for long, narrow objects.

The SEL Premium that was tested included comfortable and attractive power heated sport bucket seats up front with leather trim around suedelike inserts. An extensive list of standard gadgetry ran to a touchscreen navigation system, rearview camera, premium Fender audio, power sunroof, dual-zone automatic climate control, cruise control, heated exterior mirrors, and keyless access/remote starting. Bluetooth? Media-device connectivity? Yup, it’s in there. The audio display in the test vehicle read on the screen as a series of rectangular buttons that are easier to program and access than the goofy “roulette wheel” for station settings found in some other VW models. Gauges and vehicle-information displays are well-placed and highly legible. Ancillary controls are close by, too. Climate settings are governed by a series of buttons; at least they’re big enough to find at a glance and hit on the first try. 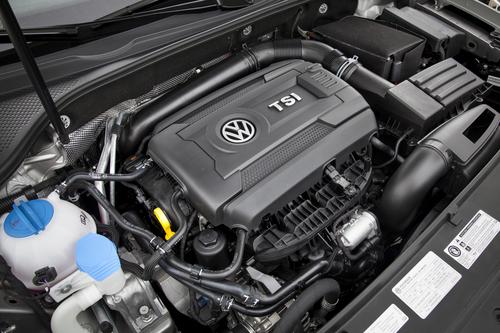 The TSI engine is a 1.8-liter turbocharged 4-cylinder rated at 170 horsepower. It replaces a 2.5-liter 5-cylinder engine also rated at 170. In Consumer Guide testing, the new engine is good for a real-world improvement of at least 1 mpg.

The 1.8-liter turbo four with direct injection puts out 170 horsepower. It’s not a neck-snapper, but, working with a 6-speed automatic transmission, it was always brisk from a stop, and let the Passat merge and pass on the expressway with confidence. As a plus, the engine is smooth enough to make you lose count of how few cylinders it actually has. In a couple of days of commuting, this driver covered 111.1 miles, 67 percent of it under city conditions, and averaged 27.2 mpg. Ride and handling trend a bit more toward comfort than pavement gobbling. There’s a buttery smoothness to the electro-mechanically assisted steering. Cornering lean is nicely controlled and few road shocks made their disconcerting presence felt. The all-season tires on 18-inch alloy wheels had good grip on pavement that was wet more often than not during this driver’s 2 days with the car.

With a delivery charge of $820, this Passat SEL Premium came to $31,715—and that was well-stuffed with standards, not bloated with options. (Two of the standard features—satellite radio and emergency-services contact—do have to be maintained with subscription fees after their introductory periods expire.) For the mixture of room, features, and road manners, that seems eminently accommodating.