Toyota’s Lexus division continues its onslaught of updated products. Hot on the heels of significantly updated versions of its flagship LS and midsize ES and GS sedans, the company debuted the freshened 2014 IS premium-compact car at the 2013 Detroit Auto Show.

The 2014 Lexus IS sports a front-end design that mirrors the appearance of its larger siblings. Since this is a sportier car than the LS, ES, and even the GS, the look is a bit more angular and aggressive. Under the skin, Lexus claims that new welding and adhesives improve body rigidity and stability. Those wanting an even meaner look can order the IS F Sport, which includes a unique grille and front bumpers.

The car will return in base IS 250 and sporty IS 350 trim levels, each with the choice of rear- or all-wheel drive. A gas/electric hybrid called the IS 300h will be available, but not in the U.S. (at least not right now).

Perhaps not surprisingly, the 2014 IS drivetrains don’t change. Both cars employ a V6 engine: the 250 a 2.5-liter unit, the 350 a 3.5. Horsepower figures were not available at time of writing, but we expect no change from the current 204 and 306 of the 250 and 350, respectively. The 416-horsepower V8-equipped IS F is not part of the 2014 roster, at least for the time being, though the IS 350 will use this car’s 8-speed automatic transmission. The 250 will return with the choice of a 6-speed manual or 6-speed automatic, with the latter the only gearbox on offer if you choose all-wheel drive.

Some of the new and notable features of the 2014 Lexus IS include blind-spot alert, lane-departure warning, and rear cross-traffic alert. A navigation with Lexus’ Enform infotainment system will also make its first appearance in an IS. It includes complimentary real-time traffic and weather data for the life of the car. In other vehicles, such services typically have a 90-day to one-year “evaluation” period, requiring the user to pay for a subscription thereafter.

The 2014 Lexus IS goes on sale in mid-calendar 2013. Pricing will be announced closer to the on-sale date.

CG Says: The Lexus IS has always played second fiddle to the BMW 3-Series. It’s not as if the IS is a “bad” car; far from it. It’s just that Lexus’ market position is one of coddling luxury, rather than driver-focused. The company hopes to change this with the 2014 edition. It has a harder-edged look that could be very appealing to shoppers who want something a bit out of the ordinary. It’s a bit disappointing that the drivetrains basically carry over from the last-generation car. Hopefully, a future “mid-cycle enhancement” will see the addition of more fuel-efficient turbocharged 4- and 6-cylinder engines paired with broader availability of an 8-speed transmission. What we’re most happy to see with this car is improved rear-seat space, which is a real sore spot with the current model. 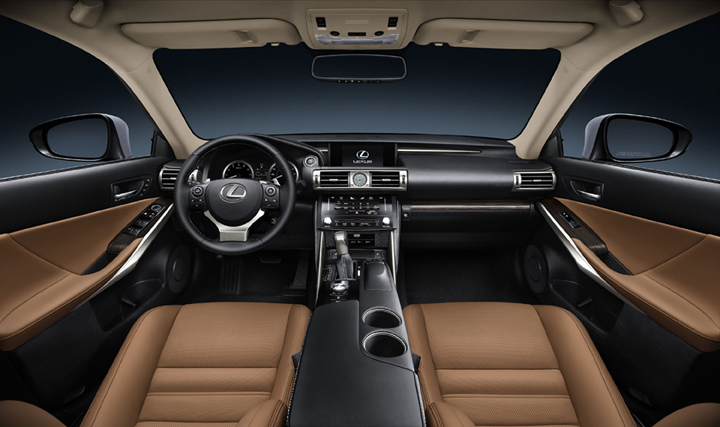