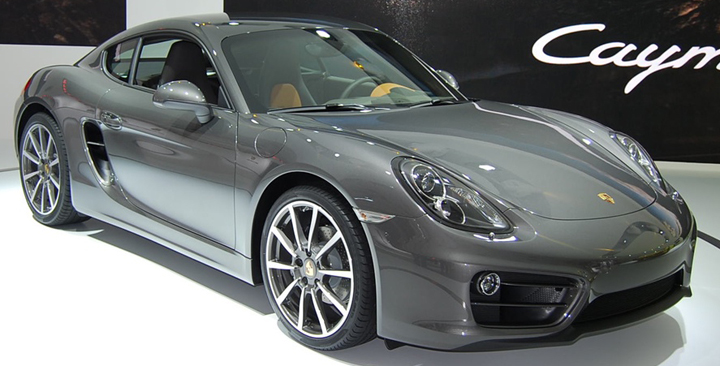 Making its world debut at the 2012 Los Angeles Auto Show was a revamped version of Porsche’s entry-level coupe. The 2014 Porsche Cayman delivers more power, but with the promise of lower fuel consumption, all while retaining the same thrilling driving experience that’s a hallmark of the brand.

Cayman will return in Base and high-performance S trim levels. Each has a horizontally opposed “flat” 6-cylinder engine and the choice of a 6-speed manual or 7-speed dual-clutch automated-manual transmission. The Base uses a 275-horsepower 2.7-liter engine while the S has a 325-horsepower 3.4-liter unit. Depending on engine, transmission, and whether or not you select the optional Sport Chrono Package, 0-60 mph will come anywhere between 4.4 and 5.1 seconds.

Due a bit sooner than Cayman is the new 2013 Porsche 911 Carrera 4. This is the all-wheel-drive version of the company’s flagship sports car. Porsche is basically bringing the Carrera 4 in line with the rear-drive 911 Carrera, which was redesigned for the 2012 model year.

The standard Carrera 4 uses a 350-horsepower 3.4-liter flat 6-cylinder engine, while the S has a 400-horsepower 3.8. Both pair with either a manual or dual-clutch automated-manual transmission with seven gears. The 7-speed manual remains an industry exclusive.

CG Says: Some enthusiasts contend that the Porsche Cayman is a better sports car than the 911. It’s tough to argue with that point, and the redesigned 2014 model could make an even stronger case.

That being said, we’re huge fans of the new 911. We recently named it a Consumer Guide Best Buy in our premium sporty/performance car category. It costs plenty, but there are few cars on the planet that match 911’s thrilling performance and daily-driver livability. The addition of all-wheel drive will make this car even more appealing, especially for those of us who live in areas where Old Man Winter makes his presence known.