2014 Toyota Tundra: The “Overlooked” Truck That Shouldn’t Be

It’s hardly unexpected, however. Full-size pickups are one of the last bastions of American dominance, and cracking that market with a foreign nameplate has been a tough row to hoe. Just ask Nissan. Its Titan was introduced about the same time as the Tundra (1999), has perennially ranked a distant sixth (dead last) in volume, and during 2012, sold at a pace of about one Titan for every five Tundras. And for every five Tundras, Ford sold about 18 F-150s.

While it’s unlikely the Tundra will ever be a big player in this segment, that doesn’t mean Toyota isn’t going to try. Last redesigned for 2007, the Tundra gets a major overhaul for 2014 that includes styling changes inside and out along with numerous newly added features. 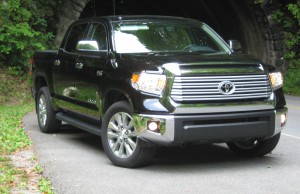 Tested SR5 is the volume model, and Toyota says 60% of Tundras will be Crewmax crew cabs.

While manufacturers in this class typically try to one-up each other with claims of “most horsepower,” “most torque,” “highest payload capacity,” “highest towing limits,” or “best-in-class fuel economy,” Toyota doesn’t really play that game. The Tundra is competitive but not class-leading in these areas, and for most buyers, that’s plenty good enough.

An area in which it falls short, however, is in the aforementioned available 4WD system. Tundra’s is a part-time system, which means it shouldn’t be left engaged when running on dry roads. That’s probably of more significance to those using their truck as a passenger vehicle (where the bed is often empty and thus light) than it is to commercial users (who usually have the bed loaded and thus heavy), as a light bed reduces traction to the rear drive wheels—which in turn makes a switch to 4WD or all-wheel drive more-often necessary. Among full-size pickups, only the Tundra and Nissan Titan don’t offer full-time 4WD or AWD.

But in other regards, Tundra has the chops. Our test route included twisting, rutted, gravel trails that the Tundra handled with impressive aplomb, my only real complaint being that the steering felt a bit slow in tight corners (meaning you have to rotate the steering wheel farther than ideal to make a given turn). Rippled surfaces typically induce lots of chassis reverberations in pickups, largely because the underlying frame vibrates like a tuning fork, and the separate body and cargo bed don’t combine to form a full-length rigid “box” as they do in cars and SUVs. But the Tundra exhibited less vibration than seems typical of pickups, though I’d want to drive one along the potholed thoroughfares that pass for roads around our Chicagoland office (where we drive other test pickups) before passing judgement. All trucks tested had the 5.7-liter V8, which felt plenty strong, and the transmission kicked down quickly for more passing power. There is little noticed noise from wind, road, or engine. 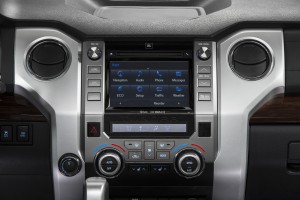 Unlike most full-size pickups, Tundra doesn’t offer a “stripped” model intended for basic commercial use. The Tundra lineup begins with the SR, which starts at $26,915 including destination—a few thousand dollars north of the “Work” models offered by most competitors. Although this is the model most commercial users would likely consider, it’s equipped to a level that might also suit those looking for an inexpensive weekend hauler. Standard features include air conditioning, power windows, remote power locks, heated power mirrors, wiper de-icers, trailer sway control, and backup camera (Tundra is the only full-size pickup to come with one standard). It also has a simplified version of Toyota’s Entune infotainment system with 6.1-inch touchscreen that includes radio, CD, USB and iPod connections, Bluetooth wireless cell-phone link, and basic voice recognition with text-to-speech function. The 4.0-liter V6 is standard and comes only with rear-wheel drive; the 5.7-liter V8 is optional with either 2WD or 4WD. Bodystyle choices include regular cab with long (8-foot) bed, and Double Cab (extended cab) with either the long bed or a 6.5-foot standard bed. Note that there’s a Work Truck Package offered on the SR regular and Double Cab that deletes some power equipment and adds vinyl flooring and seats, but it only knocks $770 off the price of the regular cab and $275 off the Double Cab.

From there, trim levels ascend through SR5, Limited, and top-line Platinum and similar 1794 Edition (the last named after the founding year of the ranch in Texas on which Toyota now builds the Tundra). Upper-line models come only in Double Cab or Crewmax bodystyles.

As is now the case with most other full-size pickups, the list of features available is limited only by your budget. Offered on top-line models are such amenities as front and rear obstacle detection, blind-spot monitor, rear cross-path detection, heated and ventilated front seats, and power sunroof.

Regardless of vehicle type, one of the main points of focus in recent years has been infotainment systems, and Tundra is fully up to date in this regard. Four versions of Entune are offered, each with increasing levels of features. Available above and beyond the entry-level SR’s basic functions (described above) are HD radio with traffic and weather; navigation system; AM/FM radio with 20-minute cache that lets you go back and repeat a segment; and a full suite of apps that include Pandora, iHeartRadio, Yelp restaurant reviews, OpenTable (for restaurants locations and reservations), current stock prices and sports scores, Bing (for points of interest), and Facebook. All work much the same as a smartphone: You swipe the touchscreen to display the numerous pages of apps and functions, then punch virtual buttons to access them. Most are quite easily deciphered, but are few icons are mysterious in their meaning, so like a smartphone, there’s some trial and error involved until you learn the system. Thankfully, Entune includes a training program, and an extended trial never sent us anywhere we couldn’t back out of, so the “error” part wasn’t frustrating. Just don’t try to learn it while driving. 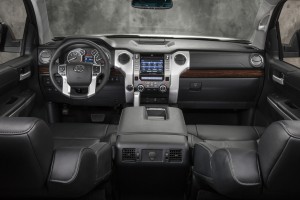 Interior of the luxury Limited is fitted with leather, wood, and bright-silver trim.

The SR5 tested had a simple three-dial climate system, which was easy to use. However, upper-line models have automatic climate control that includes rotary knobs for driver and passenger temperature, but repetitive-step pushbuttons for fan and mode. We find the latter rather tedious to adjust, even though you don’t often have to with auto climate control. Although Toyota says the entire control stack has been moved closer to the driver, there are still some audio and climate controls on the right that are quite a stretch to reach.

There are numerous storage compartments in the cabin. With front bucket seats, there’s a huge center console bin; with the bench seat, the center cushion flips up to reveal a good-sized storage bin. In back, the seat cushions fold up to make a large, flat-floored cargo area; on the Double Cab, you can get a large storage bin underneath. There’s plenty of adult room front and rear in both 4-door models, but it’s almost limo-like in the back of the Crewmax. Step-in is a bit high, but that can be said for most pickups. Visibility is quite good in all directions, which cannot.

While Toyota expects the revised 2014 Tundra to be significantly more popular than its 2013 predecessor, it won’t likely threaten the standings of any pickups above it on the sales ladder. But the bottom line is that the Tundra is a truck far more people should consider, as it’s thoroughly competitive with the best the pickup world has to offer. 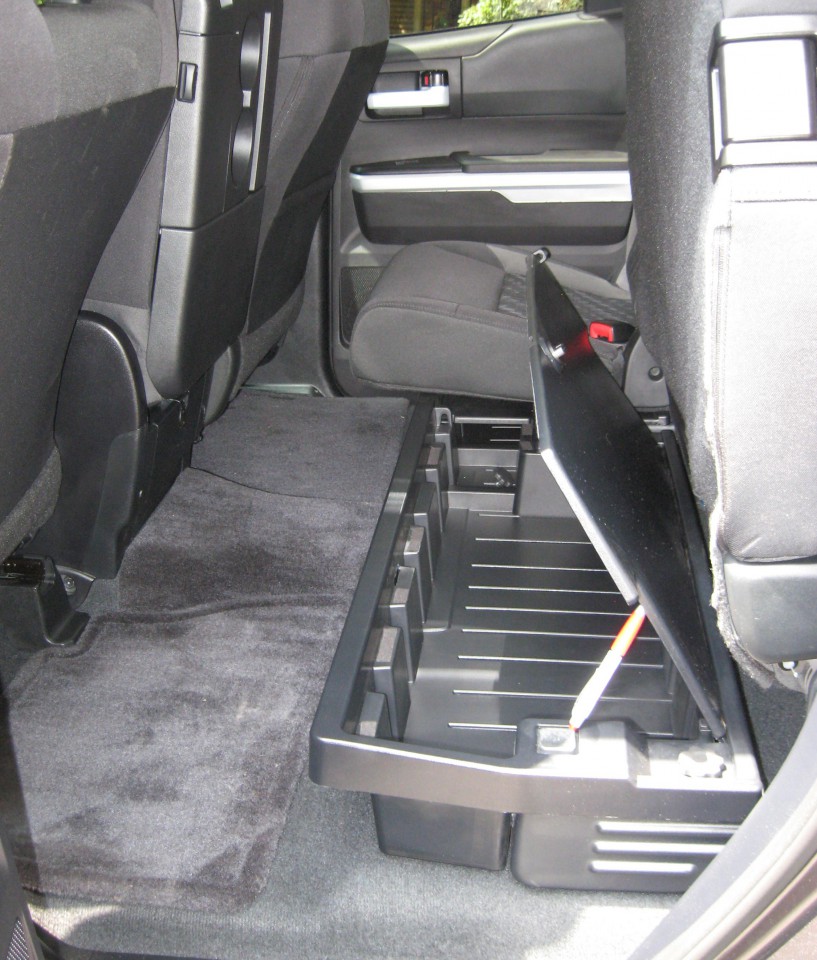 Rear-seat cushions on both 4-door models fold up to leave a large, flat-floored cargo area, and the Double Cab (shown) is available with an under-seat storage bin.