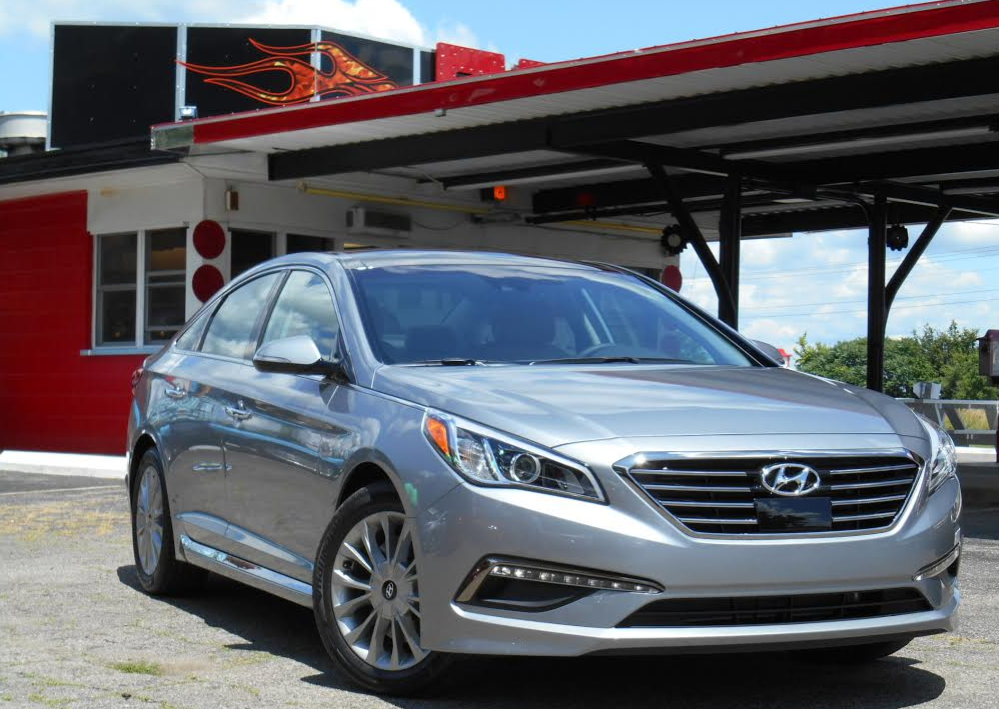 Hyundai says it went for a more “mature” look for the 7th generation of its midsize Sonata. Rick thinks it’s still pretty stylish.

When the original Sonata was launched into the competitive midsize market for 1989, it stood as Hyundai’s flagship sedan with a strong value equation. But the company was in a tailspin brought on by quality problems, so sales never took off despite the car’s comparatively low price – a trend that continued through the second generation of 1995. But by the time the third generation appeared for 1999, the company’s famed 5-year/60,000-mile  bumper-to-bumper and 10/100 powertrain warranties were in place, and the Sonata’s sales climb was impressive: from just over 14,000 for 1998 to more than 62,000 for 2001. The totals reached nearly 150,000 with the fifth generation of 2006, and that put Sonata in the big time. 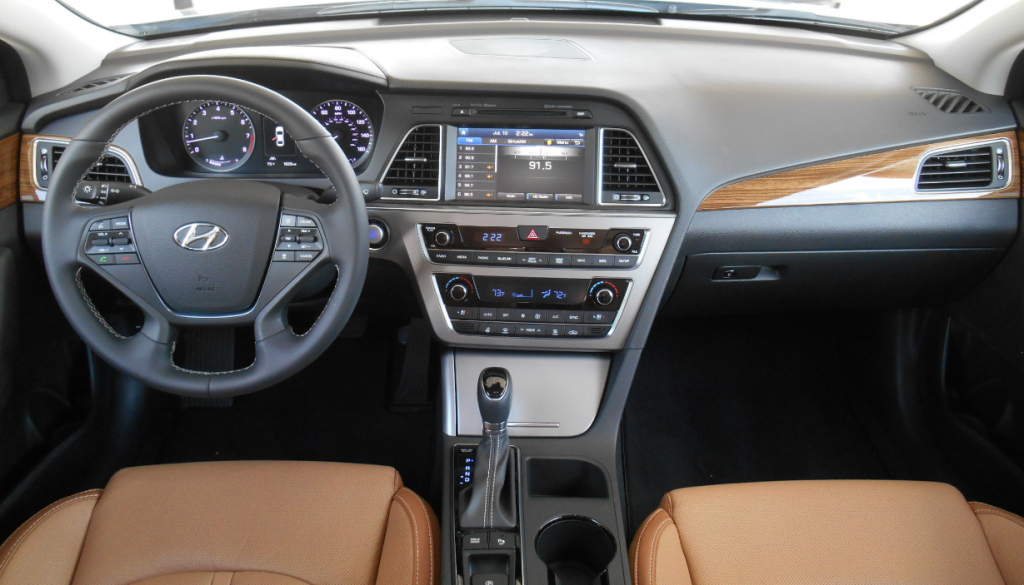 The “mature” styling theme extends to the interior, which can be dressed up to look quite ritzy.

Yet few considered any of these Sonatas to be top-shelf choices that could stand toe-to-toe with the best. They were just … sensible. Sort of the automotive equivalent of Hush Puppies.

Then, for 2011, Hyundai cut loose. The 6th-generation Sonata that appeared that year seemed to come from a different corporate planet. Swoopy lines and deft detailing replaced the solemn blandness of previous editions, and power and fuel economy suddenly became talking points. Despite some reservations about ride quality, the Sonata became the darling of the media and public alike, winning several awards and topping the 200,000 mark in sales for the first time. In fact, it has logged more than 200,000 sales every year since, vaulting it into fifth place behind the Toyota Camry, Honda Accord, Nissan Altima, and Ford Fusion in the midsize class. 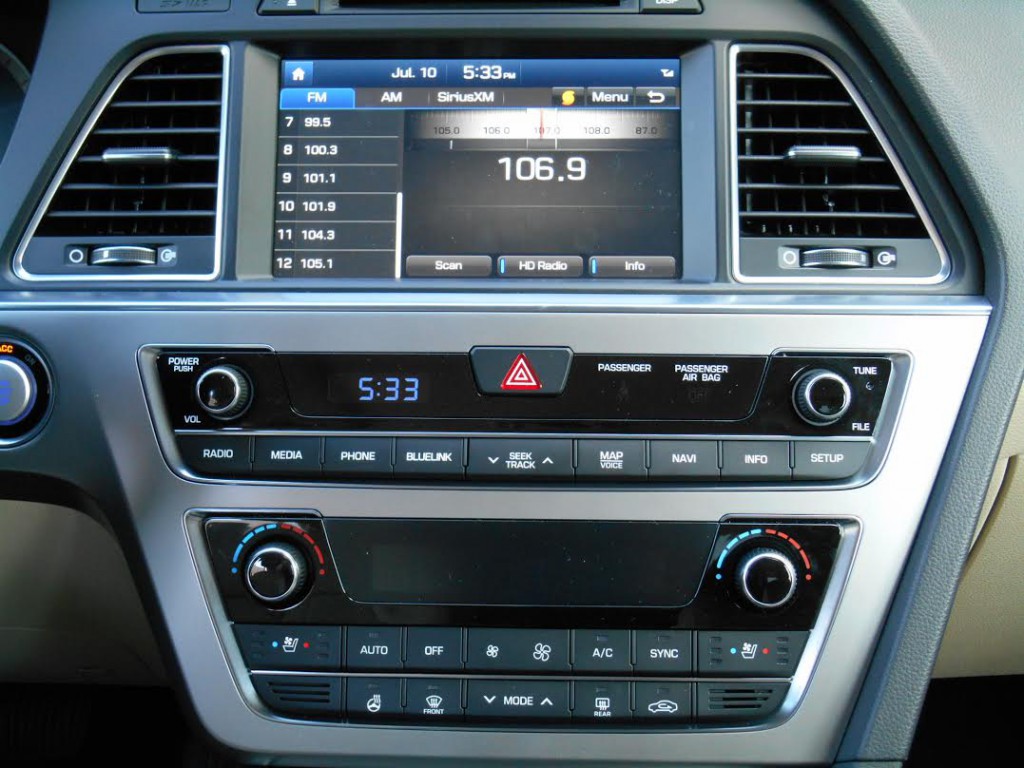 A wider center control panel allows for less crowding, but also makes the controls to the right a bit of a reach for the driver.

Sonata enters its 7th generation for 2015, and the emphasis this time is on a greatly expanded list of available features.

Despite a $300 price cut to $21,960 including destination, the base SE model adds several upscale trim touches along with a height-adjustable front-passenger seat. New to the Sonata’s list of available equipment are a host of high-tech safety features, including blind-spot detection, lane-change assist, lane-departure warning, forward collision warning, rear-obstacle detection, cross-traffic alert, and automatic high beams. Also newly available are adaptive cruise control, driver-seat memory and 4-way lumbar support, ventilated front seats, heated steering wheel, smart trunk (which can unlock and open when the driver stands near it with an armful of packages), and rear-seat sunshades. By midyear, available high-tech gadgets will include Hyundai’s Blue Link telematics system, remote-control engine start and climate-system adjustments, Apple Car Play and Google Android Auto, and the ability to download apps. 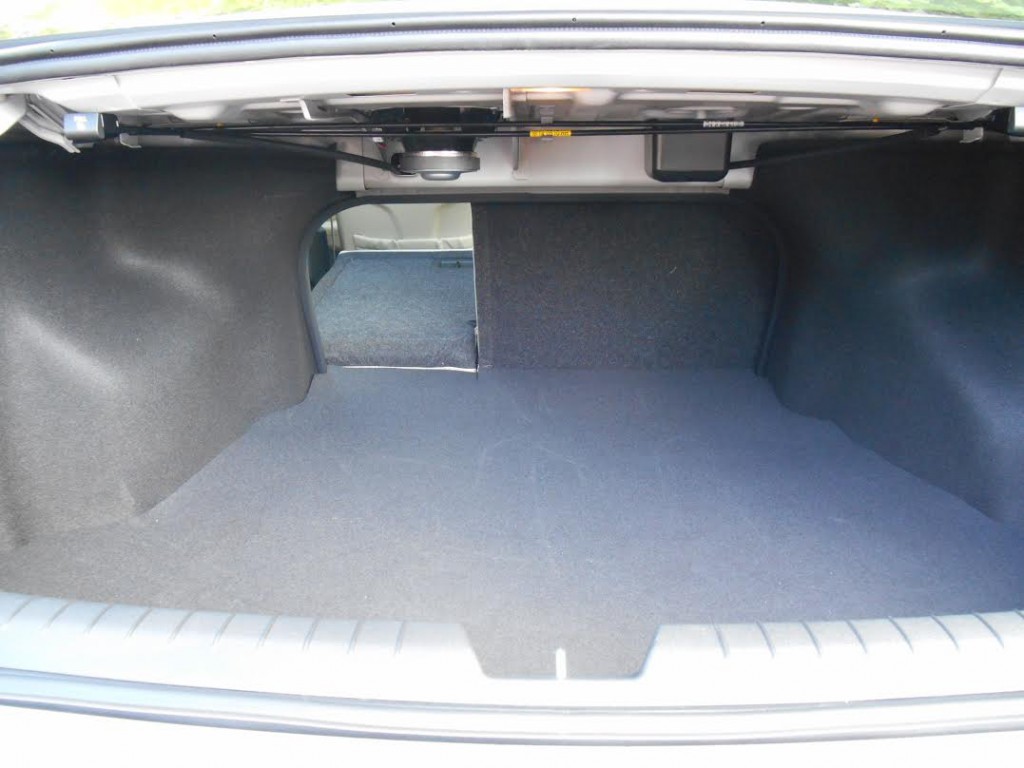 The trunk is wide at the back but quite narrow between the wheel wells. The pass-through is also narrow, and folded rear seatbacks rest about 3 inches above the level of the cargo floor. Unlike many modern vehicles, there’s no underfloor storage.

Dimensionally, the 2015 Sonata is about an inch longer and an inch wider, which results in more interior space. Styling is toned down a bit but still “expressive,” and interiors remain nicely executed if not quite lavish. Powertrain choices include a standard 185-horsepower 2.4-liter four and a 245-horsepower turbocharged 2.0-liter four, both mated to a 6-speed automatic transmission. Due in October is a 177-horsepower 1.6-liter turbo linked to a 7-speed dual-clutch automated manual. While the first two engines are about on par with those of Sonata’s competitors in terms of power and fuel economy, the last stands out with a 28 city/38 highway EPA rating. No word yet on whether or not a hybrid model will be returning to the line.

Inside, padded surfaces abound, including the dashtop and door tops. There are four interior color choices – three of them two-tone, including a new black-and-dark brown combo – with wood and brushed-aluminum-look accents. A wide center-stack display replaces the former narrow one, and while a 5-inch screen is standard, an 8-inch one comes in higher trim levels. Audio systems include volume and tuning knobs, but all other functions are controlled through the touch screen; some functions on the far right being a stretch to reach. Climate controls consist of nice rotary knobs for temperature, but somewhat tedious repetitive-step pushbuttons for mode and fan speed.

There is generous room for four adults, with the rear seat being particularly spacious–three can squeeze in back there if necessary. Visibility is good to the front corners, decent to the sides and rear corners. A rearview camera isn’t standard in the base SE, but it’s included in an option package and on all other models.

Interior storage consists of a modest glovebox (taken up almost entirely by the owners manual), a small dash tray with USB/Aux/dual 12-volt plugs, two cupholders and a small tray in the console, and large map pockets. The trunk is fairly large, but folding the rear seat backs leaves a somewhat restricted opening and about a 3-inch-high “step-up” that means long items can’t just be slid all the way forward.

We only had a chance to drive a 2.4-liter version. In full-throttle starts, the car was a bit sluggish off the line, but it felt decently strong after about 20 feet, and the transmission kicked down quickly for more passing power. 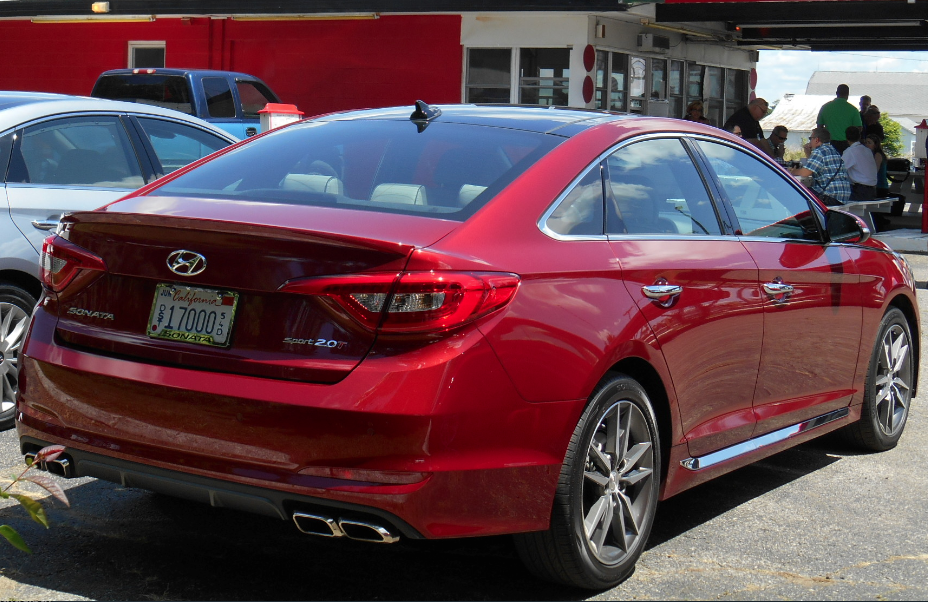 The Sonata’s Achilles Heel has long been ride quality that was a bit below the class norm, and at least on the roads we drove, it seems that’s been improved. Impacts weren’t quite as well absorbed as in top competitors, but this probably doesn’t qualify as an “Against” point any more. In the “For” column is a turning radius that is tighter than one might expect, affording fine maneuverability for a car of this size.

Sonata’s main claims to fame in the competitive midsize class continue to be value for the money and Hyundai’s impressive warranty. But it’s now also thoroughly up-to-date – if not nearly class-leading – in feature availability, offering amenities and safety equipment that rival those of many premium midsize sedans. It lags a bit in off-the-line power delivery (although we didn’t drive a 2015 version, the uplevel 2.0-liter turbo isn’t changed much from last year, and it suffers the same problem, putting it a step behind the V6s offered in some competitors), and the control layout – while classy-looking – could be a bit more convenient. But that’s about it when it comes to grievances. While it’s unlikely even this impressive update will be enough for the Sonata to overtake the Ford Fusion for the #4 midsize sales position, it’s almost certainly going to help close the gap.