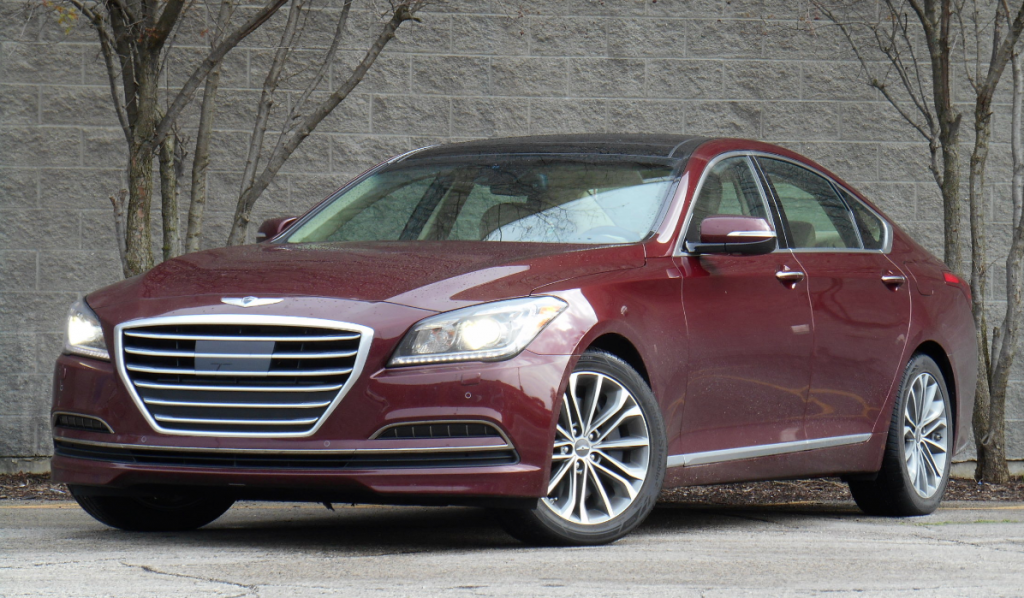 The not so good: Drivetrain falls short of world-class refinement

Maybe instead of Genesis, Hyundai should have named its line-topping luxury car Avatar. It does an excellent job as a stand-in for some of the expensive sedans of lofty reputation.

The Genesis sedan’s appearance is costly car impressive, it’s roomy, it’s commendably quiet, and it has an extensive features list. However, engine and chassis refinement are not quite all the way to the highest standards, and while the interior looks like it belongs in the big leagues, some areas are not as padded or “soft touch” as one might expect. Still, at $52,450—as Consumer Guide®’s V6 all-wheel-drive test example was priced with options and delivery—it’s close enough to the real thing to make one weigh the question of whether the cars from the “name brands” (and you know who you are) are worth the thousands of dollars extra that they cost. 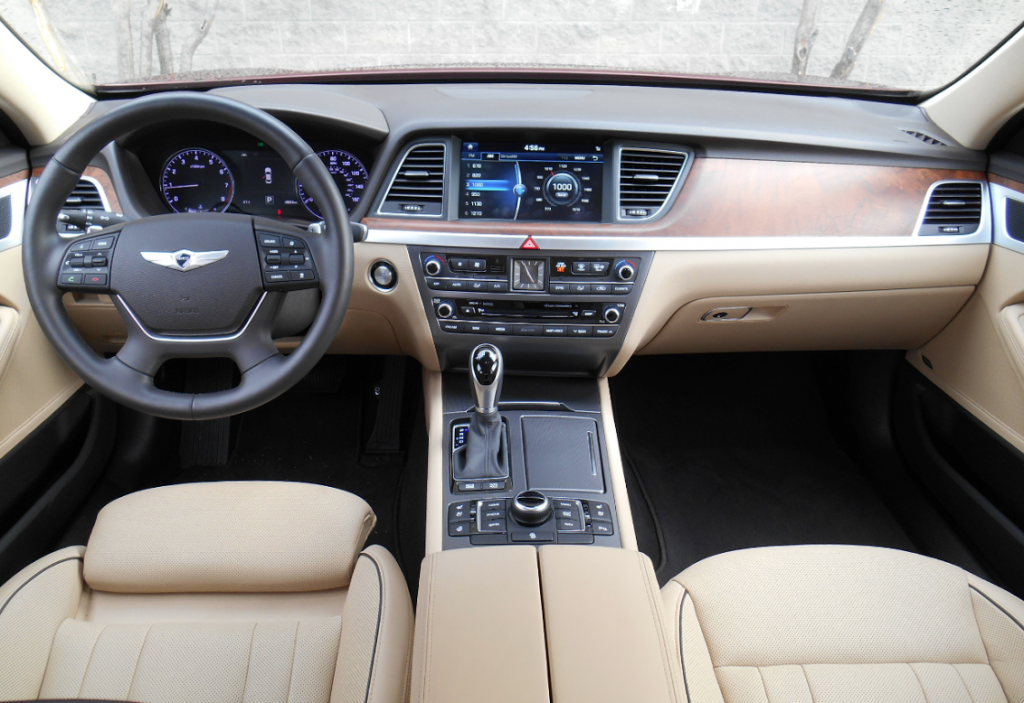 The Genesis equipment list includes many features not normally found in vehicles at this price. Seen above is the extendible thigh support on the driver’s seat, a boon to those with long legs.

The 311-horsepower 3.8-liter dohc V6 engine moves the all-wheel-drive Genesis smartly, but under acceleration there’s a slightly raspy note as it strives to reach successive gears—one of those things the established luxury marques might handle just a bit better. At least the engine quiets down nicely upon reaching cruising. The 8-speed automatic transmission operates without intrusion or confusion.

Ride and handling are both quite good, too, and the more of the 697 miles this driver put on the car, the more he liked it. Truth be told, though, there’s not quite the exactness in steering, weight transfer, or bump absorption that truly top-drawer luxos seem to know how to deliver. 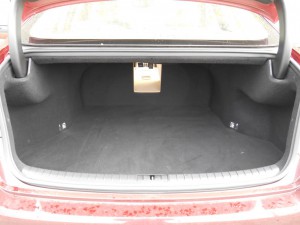 The Genesis rear seat back does not fold, but there is a handy pass-through port for skis.

This tester actually had two turns in the car under considerably different conditions, and filled up three times. Two stints in which the city/highway balance was close to 50/50 both yielded around 22 mpg, but a 350.6-mile run between Chicago and Indianapolis with 85 percent free-rolling highway miles returned an average of 24.11 mpg—very near the Genesis’ EPA highway-mileage estimate.

As for accommodations, there’s excellent head and leg room in both rows, and three adults can fit in back, even with the driveline tunnel. An airy greenhouse affords good vision—and myriad electronic warnings (some of them available at extra cost) will remind you of anything for which you forget to check. There are plenty of buttons on the dash and console, including those that summon and adjust climate, navigation, and audio, all of which show up on the in-dash touchscreen.

The glove box is big and there’s a console box for additional storage, but it has an odd 50/50 side-hinged arrangement. The console has two hideaway cup holders and a covered bin under dash that contains USB and power plug-ins. All doors sport long map pockets, but they’re somewhat narrow. Rear occupants have access to expandable pouches behind the front seats. A pull-down center arm rest includes cup holders and control buttons for the standard seat heaters and optional power rear window shade.

Larger cargo rests in a generous carpeted trunk with a wide opening. On the Indy trip, it swallowed 4 adult race fans’ coolers, backpacks, etc., with room to spare. Goose-neck hinges are covered to keep things from getting messy. There’s a pass-through in the middle of the rear seats, but the seats don’t fold, so it’s a good thing that the trunk holds as much as it does. 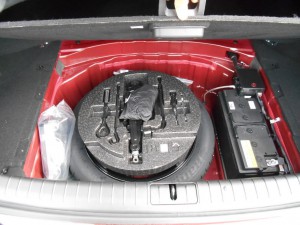 There’s not extra storage under the trunk floor, but there is a battery. Not to worry, Genesis can be jump started from under the hood via connectors provided for that purpose.

Some of this inventory—or things like it—will turn up as extra-cost items on cars from the luxury establishment, too. Their big advantage is, of course, better resale value. But it’s as fair as it is surprising to say that the Hyundai Genesis can give them a run for their additional money.

Without question, the redesigned 2015 Hyundai Genesis is a decidedly fine automobile. But whether or not it’s a bargain depends partly on what you look at as its competition.

In terms of size, the Genesis casts a shadow that’s pretty close to that of most full-size American sedans, though it generally has a longer wheelbase – and somewhat higher prices.

Yet Hyundai pushes the new Genesis as a rival to premium midsize sedans such as the BMW 5-Series and Mercedes-Benz E-Class, against which it shines in terms of value for the money. But “Hyundai” frankly doesn’t carry the weight of “BMW” or “Mercedes” in most circles, so some (particularly folks drawn to those two esteemed makes) may look at it as a pretender.

In truth, I’d call it an upstart. 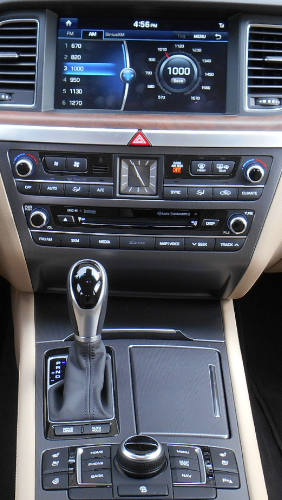 Control layout consists of a functional mix of buttons, knobs, and a touch screen.

The formula used to create the Genesis isn’t new. In the past, a few manufacturers have tried to stretch beyond their usual price points to offer a high-end car at a lower cost than similar vehicles bearing upper-crust badges, only to find a strong wave of buyer resistance. Volkswagen famously tried it with the Phaeton and failed miserably. Subaru took a shot at the “bigs” with the SVX and totally missed the mark. Even Toyota can’t sell its Avalon in typical Toyota-like numbers.

And this isn’t Hyundai’s first time wading into these waters. The previous-generation Genesis also carried a rather non-Hyundai price tag, which goes double for the current line-topping Equus. But this new Genesis may finally be the car that opens the company’s legitimate price window a little wider. The base model – a rear-drive V6 – starts at $38,000, while the top-line rear-drive V8 (with 420 horsepower) starts at $51,500. Note that all-wheel drive isn’t available with the V8.

John covered the details well, but perhaps I can add some observations – or second his opinions.

A lengthy highway trip from Detroit to Chicago proved the Genesis an excellent road car. Quiet and refined, it included all the gizmos that make such travel more relaxing, such as comfortable seats, head-up display, lane-keep assist, and active cruise control (which will keep you a set distance behind the car in front, regardless of its speed) – though granted, that can be said about a lot of cars these days.

In around-town driving, a few other elements came to light.

Something that’s challenged Hyundai for some time has been suspension compliance (though less so somehow in SUVs). For a given level of sporty handling, the ride always seems a bit brittle. Although the Genesis has improved on that, it’s still not quite up to the standards of most premium makes, but you might have to drive them back-to-back to discern any real difference. By most yardsticks, the ride is certainly agreeable, but it falls well short of “plush.” However, Hyundai is pushing the Genesis as somewhat of a sports sedan – not a full-blown luxury sedan – so this is probably intentional. But I think the company had an opportunity here to “lean” (if you’ll excuse the pun) toward a softer suspension providing a cloud-like ride that would set the car apart, but that clearly didn’t happen.

In recent years, many manufacturers have put a stronger emphasis on interior materials, and Hyundai is no exception. In this regard, the Genesis is certainly in the premium league. Our test car was fitted with padded, two-tone surfaces and rich-looking expanses of wood and satin-aluminum trim. Also along for the ride were fine details such as a square analog clock.

Although the Genesis uses the same type of console-mounted control knob that’s currently popular in premium-level cars, there are more traditional dash-mounted buttons and a large touchscreen that make simple adjustments less tedious. The only oddity here is that the audio controls end up being split into three distinct levels (console knob, lower-dash buttons and knobs, and upper touchscreen) that forces your hand to wave around during some procedures. Climate controls are grouped together and easy to decipher, though mode is controlled by a repetitive-step pushbutton, which can be tedious to use.

The base all-wheel drive Genesis V6 starts at $40,500 with a fair amount of equipment, which seems like a bargain when compared to premium makes of the same specification. But against some domestic full-size cars … not so much. For instance, all-wheel-drive V6 versions of the Buick LaCrosse and Chrysler 300 start at $38,615 and $33,495, respectively, though they’re not as well equipped at those prices. Furthermore, they don’t necessarily offer all the high-end features that can be found on the Genesis’s extensive options list.

Thus Genesis makes its mark by looking and feeling as though it costs more than it does, and by offering premium features that most “regular” cars don’t. Whether that makes it a bargain may hinge on the weight – and value – you put on brand awareness.