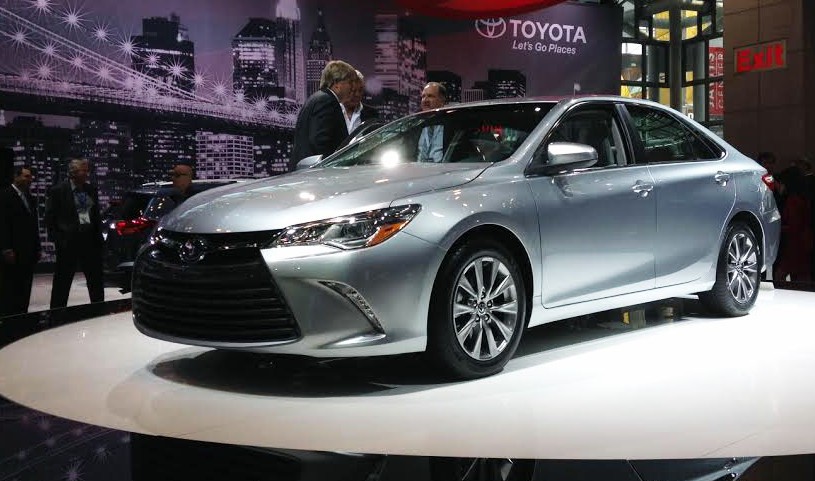 NEW YORK — Although it didn’t turn out to carry the radical styling of some earlier sketches and concepts, the redesigned 2015 Toyota Camry unveiled at the 2014 New York Auto Show certainly sports a more modern and aggressive look than the outgoing model, which was introduced just three years ago for the 2012 model year.

To create the 2015 design, Bill Fay, Toyota Division Group Vice President and General Manager of Toyota Motor Sales, USA, said the company “…stripped the current Camry down to the chassis and started almost from scratch.” He indicated that virtually everything south of the roof was new, and though the car still looks like a Camry, it’s also decidedly different from the outgoing model.

So, how about that Camry styling? The front end follows the “gaping mouth” trend of some other recent Toyotas with a new grille, facia, hood, and headlights. A rounded character line sweeps along the sides of the car to a restyled rear with new taillights, trunklid, and bumper. The rear wheels are also pushed farther out to give the car a more athletic stance.

But changes aren’t restricted to the exterior. Inside, materials and trim get updated, as do the center-stack controls and instrument panel, the latter of which now hosts a central 4.2-inch multi-information display. Higher-line models feature a 7-inch dashboard screen for Toyota’s latest Entune infotainment system. Also new is a class-exclusive wireless charging system for cell phones.

When it goes on sale this fall, the 2015 Camry model lineup will be expanded to include a sporty XSE trim level, and a similarly sporty SE trim will be added to the returning Hybrid version. These two models clearly indicate that Toyota is trying to influence younger buyers with what it calls its “Waki Doki” theme, which translates to “heart-racing excitement.” And if looks are any indication, the company has taken a huge step – if not the hoped-for giant leap – in that direction.

CG Says: Toyota points out that the Camry has been America’s best-selling car for the past 12 years, and that has to make the company cautious about changing it too much. So while earlier drawings and concepts looked like a stunning departure for what has traditionally been a rather staid-looking sedan, it is easy to see why it was tamed down somewhat for production. Like nearly every other manufacturer, Toyota wants to go after a younger audience, but the Camry is such an established nameplate – and so popular with older buyers – that the danger here is probably more in alienating its traditional clientele. In the end, it really won’t matter. A Camry in any other style is still a Camry, and it will likely keep selling well on that attribute alone.