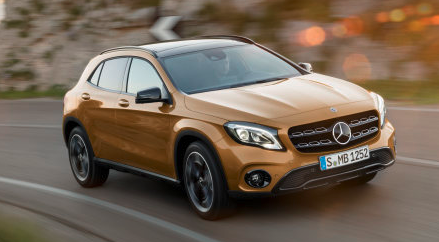 DETROIT – Mercedes-Benz revealed a refreshed version of its subcompact GLA crossover in conjunction with the 2017 North American International Auto Show in Detroit. The smallest of Mercedes’ seven crossovers, the GLA was introduced for 2014.

Updates for the 2018 model year include freshened exterior and interior styling, a larger infotainment-system screen, and more power for the topline AMG GLA45 model. 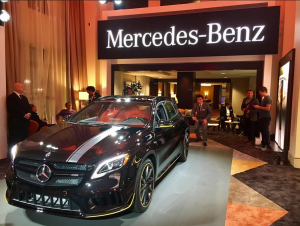 Mercedes claims that revisions to the GLA front and rear fascia not only update the little crossover’s look, but also improve aerodynamics, which should result in improved EPA fuel-economy estimates.

The high-performance GLA45 now boasts 375 horsepower from its 2.0-liter turbocharged engine, a bump of 20 over the previous model. Mercedes claims the GLA45, which comes with 4Matic AWD, with rush to 60 mph from a stop in just 4.3 seconds.

Standard on the GLA45 and available on other models are new LED headlamps, replacing standard xenon units.

Returning for 2018 are GLA250, GLA250 4Matic, and AMG GLA45 4Matic models. Mercedes also teased the addition of a new GLA220 4Matic base model, but didn’t offer any specifics on equipment or price.

The new GLA is already on sale in Germany, and arrives in U.S. showrooms sometime this summer.

Mercedes seems to have cracked the youth code with the GLA, drawing young shoppers that might have otherwise passed on the German luxury experience. The 2018 updates seem subtle, but should help keep this small crossover on the radar of entry-level premium crossover buyers.