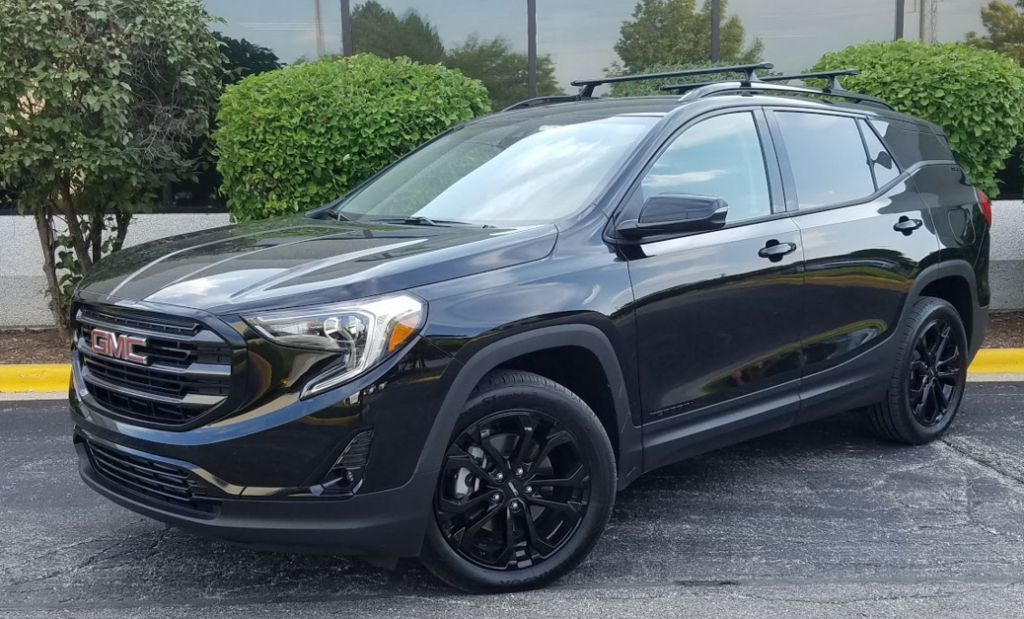 GMC’s top-line Denali trim level is one of the most successful nameplates in all of autodom these days, and it has virtually become a brand of its own. But among compact-SUV buyers, the $40,000 ante of the 2018 GMC Terrain Denali might seem a bit rich. In fact, we tested a Terrain Denali that ended up at a cool $41,660 with a few options. So this time, we tested something more palatable … though in the end, not by much. 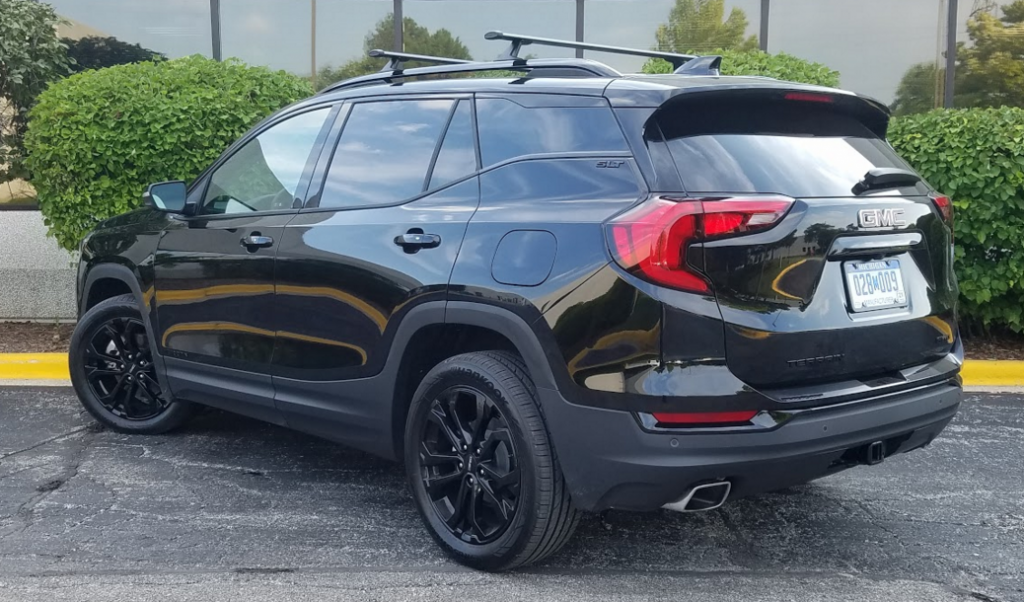 If you don’t necessarily want your Terrain looking as though you drove it into a pond of black paint, you could skip the Black Edition option (which includes the black wheels) and Ebony Twilight Metallic paint and save yourself $1190.

Thus it seems the real purpose here was to sample the various option packages that could be ordered for the SLT. Since we’ve previously covered the otherwise similar Denali, you can check that report for more details; here, we’ll dive more deeply into the specifics of our highly optioned test vehicle.

One of the “plus” points of the Denali — and, by virtue of a $1495 option, the SLT — was its 2.0-liter turbocharged engine. Rated at 252 horsepower, its greatest virtue was not so much being able to propel the SLT to 60 mph in less than 7 seconds by our clock — a very credible performance — but rather the fact that it exhibited very little of the dreaded “turbo lag” that plagues many other small turbos, even in a full-throttle start (where it’s usually most noticed). While not the “responder” a V6 would likely be, the little turbo strikes a good balance between power and fuel economy. And speaking of fuel economy, this stint of 85% highway driving — which also included five fuel-sucking 0-60 runs — netted us 27.7 mpg, better even than our previous Terrain Denali test vehicle (or the EPA) managed.

Visibility was less pleasing. While not bad to the left front, things degraded in every other direction due to thick roof pillars (the left front being angled to provide a slimmer profile), though the standard rearview camera helps when backing. But that’s really about it for complaints.

Passenger room is impressive, as is interior storage space. And the latter deserves some special recognition.

Besides a good-size glovebox, there’s a small bin over it, a 2-tier console box with two USB plugs, two console cupholders, a forward console bin with Aux/USB/USB-C/12-volt plugs and an SD-card slot, large console “side-saddle” bins, and small bins in the doors over small map pockets with cubholders. How did GMC cram in all that space? Funny you should ask.

While it’s not the most colorful driving environment, it is one of the most cleverly packaged. Besides small bins in the doors (just below the front of the armrest), over the glovebox, and on each side of the console, there’s lots of space on the console itself, thanks in part to removing the gear-shift lever and replacing it with buttons mounted under the climate controls on the center stack (the three buttons to the right of the red one are for Reverse, Neutral, and Drive).

If you look at the console, you might notice something … something missing, that is: a gearshift lever. Although it took a couple tries to get used to, GMC’s choice of moving the gear-selection function to buttons along the lower edge of the dash — underneath the climate controls — is a great idea that really pays dividends in terms of console space. So kudos. Further kudos go to whoever thought of adding the aforementioned console side bins, bin over the glovebox, and small bins in the doors — all handy for stashing stuff. Also, in the cargo area, you can release the rear seat backs with levers on the side walls, and the front passenger seat folds flat to create a really long cargo channel. Nice.

Other quick interior notes: Not only is there great headroom and legroom both front and rear, but we really appreciated the SLT’s standard power driver seat with tilt cushion and power lumbar adjustment. Added in the $1250 Preferred Package were equally appreciated driver-seat memory, heated steering wheel, and — an unusual nicety for the class — a power passenger seat with power lumbar adjustment, along with a hands-free power liftgate. So that’s an option you might want to check off.

Levers on the wall of the cargo area release the rear seat backs, which fold level with the cargo floor to create a sizeable, cubic storage space. Not shown is that the front passenger seat back can be folded flat to make for a very long channel.

Another (maybe, two others) that should be checked really shouldn’t have to be. First is the Driver Alert Package II ($745) that includes forward collision warning and low-speed automatic braking with pedestrian detection, lane-departure warning with lane-keep assist, adaptive cruise control, and automatic high beams. These are valuable safety features that are increasingly becoming standard on vehicles of virtually all classes, and GM is behind the curve in this regard. Almost equally valuable are the features of the Driver Alert Package I ($445) that includes blind-spot alert, rear-cross-traffic alert, rear obstacle detection (especially nice considering the poor rear visibility), and safety-alert driver seat, which “buzzes” the cushion instead of sounding an audible alarm if you need to be made aware of a safety hazard. So figure on at least adding these two.

While there were certainly other options, most could be eliminated without much drawback. So the math works out to this: $32,600 to start, $995 for destination, $1495 for the potent turbo engine, $745 for Driver Alert Package II, $445 for Driver Alert Package I = $36,280. And that would get you an impressively performing compact crossover with lots of space, lots of comfort, lots of convenience, lots of safety features … and just a niggling little visibility problem.

Terrain was redesigned — and downsized — last year to create a true compact crossover, though one that’s on the larger (and somewhat more expensive) side. Not all in the class offer as potent an engine as our tester’s optional 2.0-liter turbo, nor anywhere near as much storage space, whether in the cabin or in the cargo area.