The not so good: Trunk space and versatility

Although boasting lots of advantages and adding more choices every year, hybrids still make up a very small percentage of passenger-vehicle sales. Even smaller is the sub-set of hybrid sedans, led by the recently redesigned Honda Accord Hybrid and Toyota Camry Hybrid, both improved in their latest iteration.

Also in that sub-set is the Ford Fusion Hybrid. And while this generation has been around since 2013 — and has thus been overshadowed by its more recently redesigned rivals — we found it still has a lot to offer. 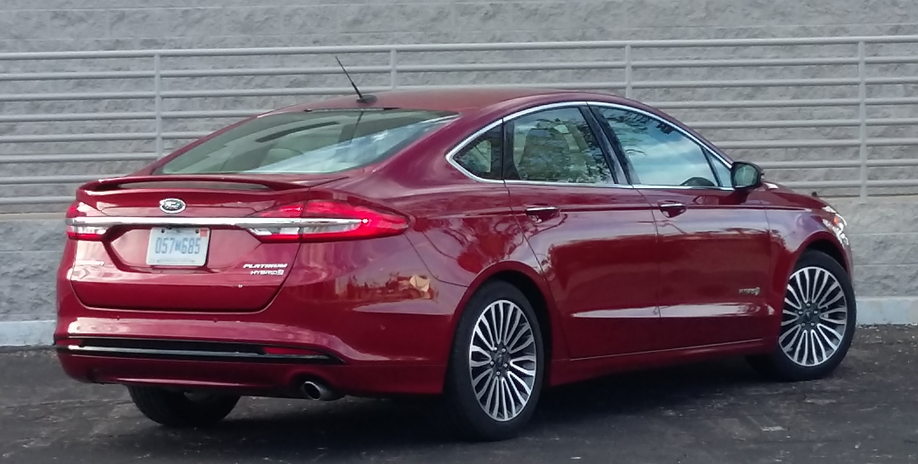 Although introduced for 2013, styling of the Fusion still looks modern — and good. Besides offering a hybrid, Fusion is among the few midsize cars to offer all-wheel-drive versions (though not as a hybrid).

A hybrid’s claim to fame has traditionally been fuel economy, but many of the latest models also provide surprisingly strong acceleration. While in neither case can the Fusion Hybrid quite match its newer competitors, it’s really not that far behind the curve.

Powering the Fusion Hybrid is a 2.0-liter 4-cylinder engine paired with an electric motor to produce a combined 188 horsepower. That’s about on par with the rating of the standard 4-cylinder engine in most gas midsize sedans, but the Fusion’s EPA numbers aren’t: At 43 city/41 highway/42 combined, they easily surpass those of gas sedans, though they’re somewhat off the 47-mpg rating of the segment-leading Honda Accord.

True to form, the Hybrid version of the Fusion returned great fuel economy, with our test vehicle averaging more than 40 mpg.

Fusion also can’t match the Accord in acceleration. Although it does quite well at around-town speeds, offering a fairly strong full-throttle jump off the line and fairly quick kickdown response when the throttle is stabbed while underway, it seems to run out of breath a bit at higher speeds — such as in highway merging and passing. We averaged 40.3 mpg in about 60% highway driving, very close to the EPA estimates and nearly identical to what we saw with a Toyota Camry Hybrid, though somewhat less than the stellar 49.6 we got with a Honda Accord Hybrid.

If the hybrid battery is fairly well charged, the Fusion Hybrid can run for some distance on electric power only, and Ford says it can reach up to 85 mph in that mode. We didn’t attempt to confirm the latter, but we did notice that it could accelerate at a reasonable rate on electricity without kicking on the gas engine, and often noticed it running on electricity while cruising down the road. We should say, “barely noticed,” as transitions between electric and gas assist were commendably subtle. It was also very quiet at virtually all speeds, and the ride was quite comfortable.

Also quite comfortable were the seats. It’s one of those things I didn’t notice until I swapped the Fusion for another vehicle, and then I noticed. Granted, seat comfort is subjective — not everyone is going to like the same ones — but these certainly fit me well.

What also fit me well was the driving position, and most notably here, the Platinum test vehicle had a power tilt/telescopic steering wheel whose position could be stored with the seat and mirror settings in memory — very rare for the class, and really nice if two people share the car.

The Fusion Platinum Hybrid is very nicely appointed inside, with controls that are easy to reach and decipher. Of note is the rotary shift knob (next to the cupholders in right photo), which we grew to like, in part because it frees up console space.

Something else really nice were the interior furnishings, with two-tone leather being accented with rich wood and satin trim. Furthermore, virtually every surface you’d hope would be padded was, adding to the appeal.

Controls also deserve a positive mention. While the only audio-system knob was a volume control, it was fairly simple to tune in stations with virtual buttons on the easy-to-reach touchscreen. Also, the audio system included a CD player, a disappearing feature. Climate controls were all of the repetitive-step pushbutton variety with mode being adjusted through the screen — not as ideal as having rotary knobs — but these, too, were easy to reach.

But the real star in the control galaxy was the rotary shift knob. Not only is it very easy to use, but it frees up space on the console, which could then be used for storage. And the Fusion offers a fair amount of it, with a decent-size 2-tier glovebox, large console box with USB port, two cupholders, a small console bin, a large forward console bin with 12-volt and USB plugs, and small map pockets with cupholders in the doors.

While the Fusion does have a fold-down rear seat back, the opening revealed is not as large as those in most newer competitors, and the floor is oddly shaped. However, there’s also quite a bit of hidden storage beneath the floor.

Less impressive was the trunk. If there’s an area where newer rivals have made gains, it’s here. Both the new Accord and Camry have fold-down rear seat backs, and while they rest roughly 3 and 7 inches above the level of the trunk floor, respectively (making it difficult to slide long items forward), at least the trunk floors are virtually flat. While the Fusion’s seat back folds, it reveals a smallish opening that’s 10 inches above the very oddly shaped load floor that has a tall shelf at the back. Also, sickle-shaped trunklid hinges dip into the load area (though they’re covered to protect cargo), but on the positive side, there’s a good amount of underfloor storage.

Although hybrid hatchbacks like the Toyota Prius account for most hybrid sales, midsize hybrid sedans are offered by a surprising number of manufacturers, being available in the Chevrolet Malibu, Hyundai Sonata, and Kia Optima in addition to the Accord and Camry mentioned previously, and, of course, the Ford Fusion. While the Fusion ranks as the oldest of these designs, it is certainly not without its merits — and appeal.

Although “old” as hybrid sedans go, the Fusion doesn’t really feel that way, and in fact holds some advantages over newer rivals. If you’re one of the relatively few folks considering this style of hybrid, the Fusion certainly shouldn’t be overlooked.