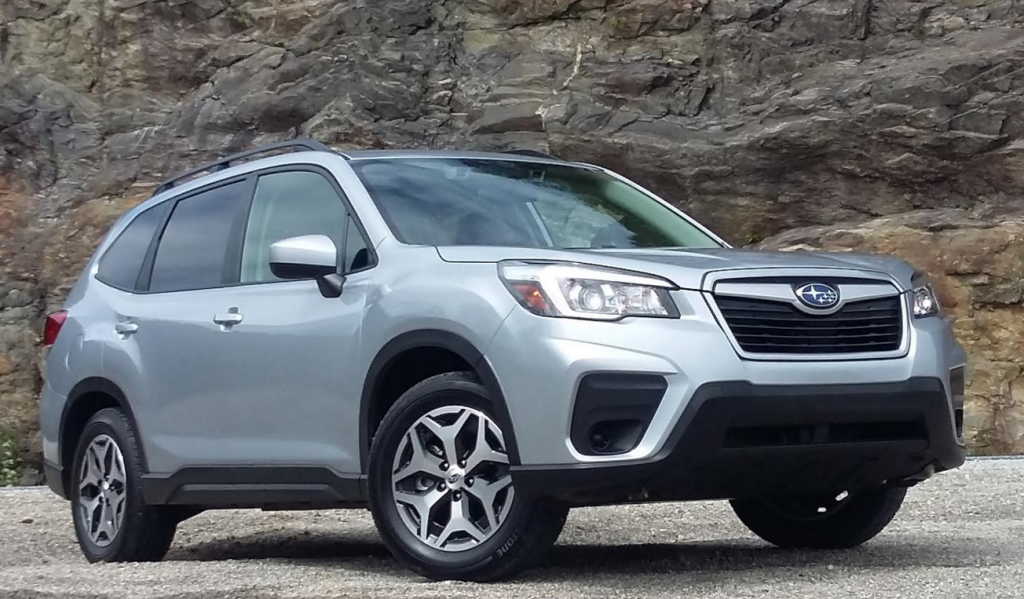 Even considering the phenomenal recent growth in the compact-crossover segment, Subaru’s Forester has been incredibly popular of late. And it’s poised to get even more so.

With its redesign for 2019, the fifth-generation Forester gains a little more room, more standard power, and a host of new features, while expanding the availability of many existing ones.

Although overall length is about the same at 182.1 inches, a 1.4-inch increase in wheelbase adds the same to rear-seat legroom, and cargo capacity is also up, gaining 1.4 cu. ft. for a total of 76.1 – large for the compact class. Meanwhile, the standard 2.5-liter “flat four” engine gains 12 horsepower to 182, and it comes only with a revised CVT automatic transmission with a wider gear-ratio spread; the previously standard 6-speed manual has been dropped. Also dropped – at least for now – is the 250-horsepower 2.0-liter turbo engine previously offered in 2.0 XT models. EPA fuel-economy figures with the 2.5 have improved by about 1 mpg to 26 city/33 highway/29 combined.

But the biggest news is the new features added … well, that and the fact that some previous ones are now offered on lower-level models. 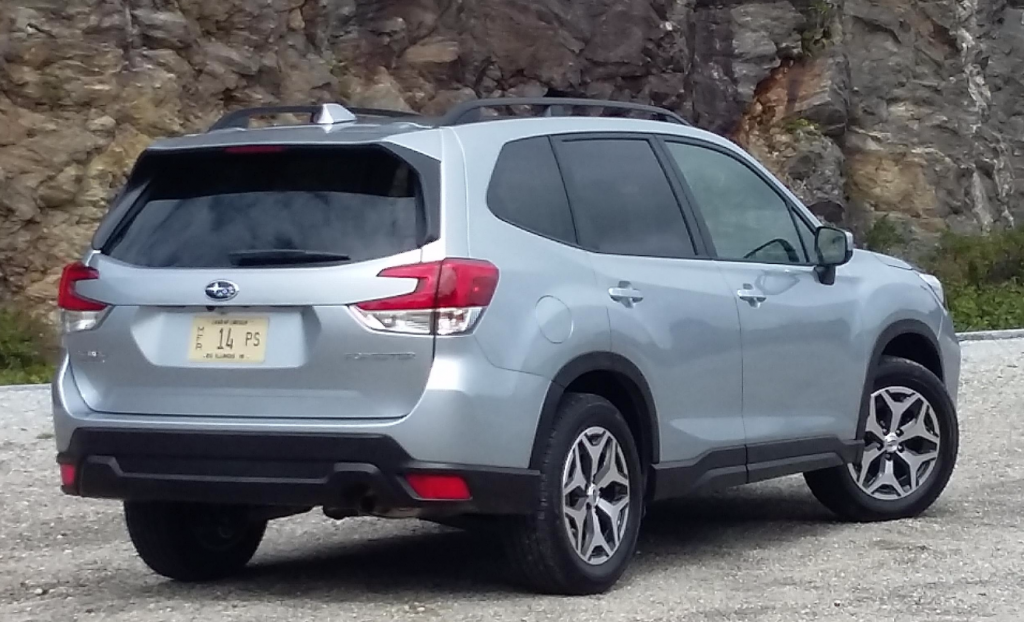 Most notable in this view is the 2019 Forester’s 5.3-inch-wider tailgate — now 51.2 inches side-to-side. Subaru says a standard golf bag can be laid sideways without having to tilt it to get it in.

First, the lineup. Starting at $25,270 including the $975 destination charge – just $500 more than the previous version — the Base model gets as standard Subaru’s EyeSight suite of high-tech safety features, something that previously required taking a step up to the Premium model and then adding it as an option. Included in EyeSight are forward collision warning and mitigation, lane-departure warning, lane-keep assist, adaptive cruise control, and Lead-Vehicle Start Alert, which lets you know if the vehicle in front of you in traffic moves and you don’t. Also newly standard are the aforementioned CVT automatic, automatic climate control, LED headlights, welcome lighting, and auto-vehicle hold, which allows you to take your foot off the brake during long stops. And the tire-pressure monitoring system adds individual tire-pressure readouts, a great convenience. Other notable standard features include all-wheel drive, 6.5-inch touchscreen, and Apple CarPlay/Android Auto. Optional are 17-inch alloy wheels (in place of steel ones) and a roof rack. Optional on all models is a $970 Entertainment Anywhere Kit, with includes a WiFi hotspot, two iPads, and two sets of headphones.

Likely to continue as the most popular model, however, is the $27,670 Premium. Not only does it add alloy wheels, a panoramic moonroof, hill-descent control (for off-roading), 10-way power driver seat with adjustable lumbar support, rear-seat a/c outlets, a cargo cover, and Subaru’s STARLINK telematics system, it also makes available optional features such as a power tailgate, keyless access and starting, blind-spot and rear-cross-traffic alert, and the Cold Weather Package (heated front seats, mirrors, and wiper de-icers). 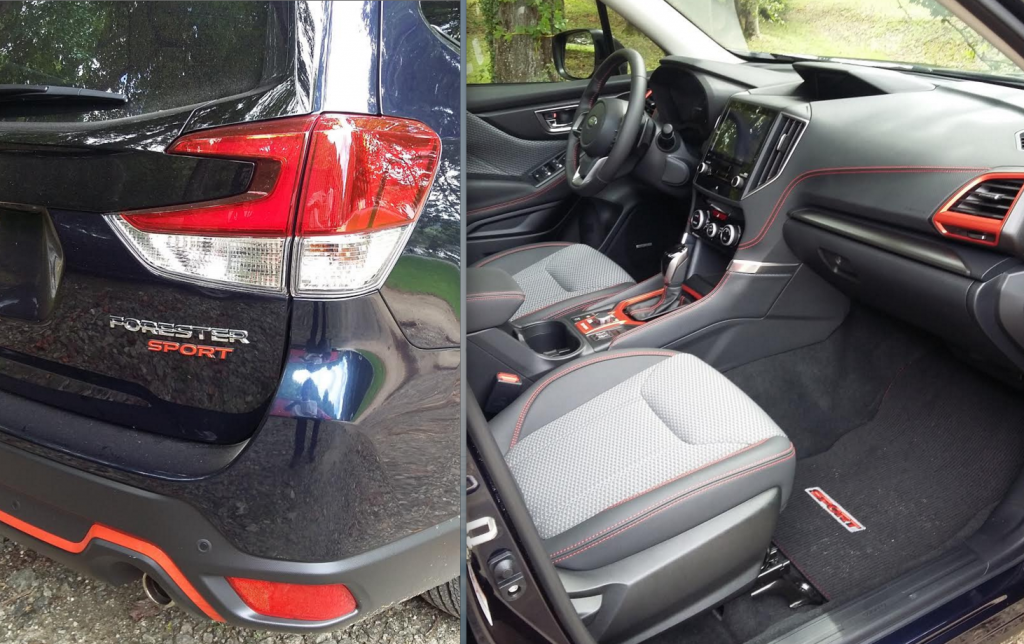 The new Sport model is distinguished with orange trim both inside and out. Although it’s tough to make out in this photo (photographer’s fault; sorry), the vehicle shown wears dark blue paint that’s unique to the Sport.

Next up is the new-for-2019 Sport, starting at $29,770. As the name implies, it adds some sporty touches such as orange interior and exterior trim, black accents, and 18-inch black alloy wheels. It also adds equipment including steering-wheel paddle shifters, fog lights, automatic high beams, keyless access and starting, LED cargo lights, and the All Weather Package. Options available are blind-spot and rear-cross-traffic alert, power tailgate, 8-inch touchscreen, and a Harman Kardon sound system. And one of the colors offered – a dark blue – is exclusive to the Sport model.

Next up is the $31,770 Limited, which adds leather upholstery, dual-zone automatic climate control, power tailgate, blind-spot and rear-cross-traffic alert, and adaptive headlights (they turn with the steering wheel), along with the availability of options such as reverse automatic braking, heated steering wheel, navigation system, and a Harman Kardon audio system.

Topping the line is the $35,270 Touring. Besides adding as standard most of the Limited’s optional features, it also gets a memory driver seat, 8-way power front passenger seat, and heated rear seats. It’s also the only model to get Subaru’s new DriverFocus system, which uses a camera with facial recognition to not only give visual and audible warnings of drowsiness or inattentiveness (by “seeing” that your head dropped or is turned to the side for a period of time), but it also recognizes up to five drivers and automatically adjusts the driver seat, mirrors, and climate controls to that person’s preferences.

Folding the rear seat backs creates a nearly flat load floor (which it didn’t used to), and the underfloor space includes a “slot” in which to store the cargo cover — a really nice touch.

Another area that shows improvement is in cargo versatility. While the rear storage area remains large and cubic (and is in fact a bit larger than before), the biggest change is that the rear seat backs now fold nearly level with the cargo floor, their slight “step” covered by a flip-down ramp; previously, there was a 3-inch step, which made it awkward to slide long items forward. Also, the liftgate has an opening that’s more than five inches wider, and Subaru says a standard golf bag can be laid sideways without tilting it to get through the opening. Also neat is that there’s a good amount of underfloor storage space (with the spare tire mounted beneath it) that includes a wide slot into which the cargo cover fits – a really handy feature.

Not so much “handy” as just “neat” is that the door sills are newly undercut so that your pants legs are less likely to get dirty in the winter. The raised ride height (Subaru says the Forester’s 8.7 inches of ground clearance is among the best in the class) and tall door openings make getting in and out a breeze.

Visibility has long been a Subaru strong suit, and that generally holds with the new Forester, though the right-front roof pillar is thick enough to block a bit of the view. A rearview camera is standard, and though it doesn’t display a full 180-degree wide-angle view (useful for seeing down parking-lot aisles when backing) it’s very close to that — probably about 175 degrees — and Subaru says it now includes its own washer … a great feature! 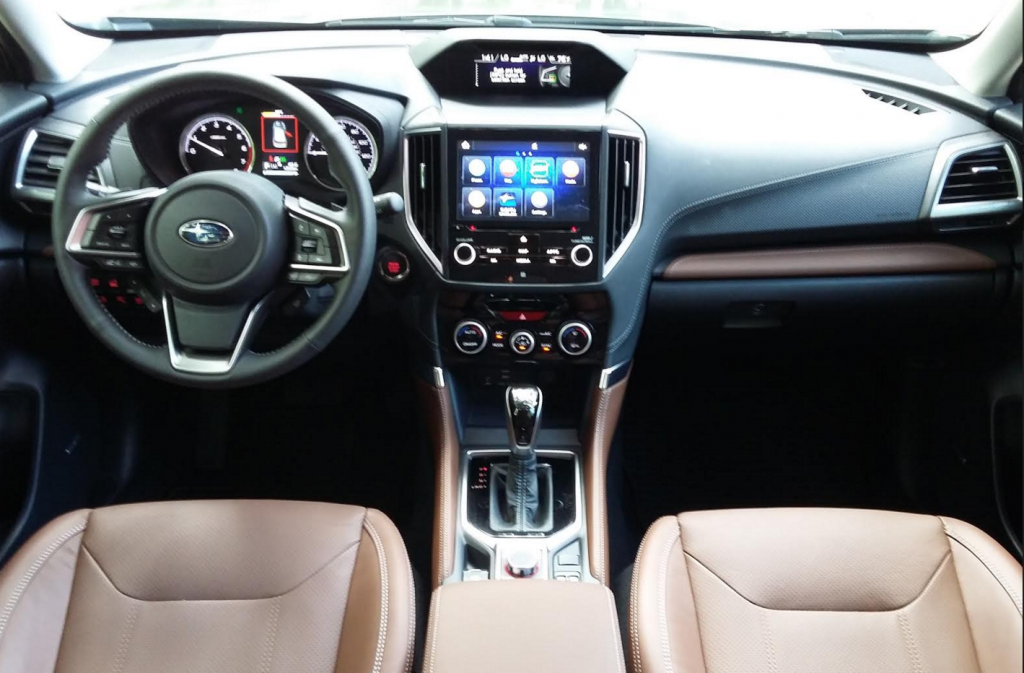 The Touring we tested (pictured) was fitted with the optional brown leather upholstery, which was set off nicely by the wood trim. Control layout rates as very good, as do materials.

At least on the top-line Touring model driven, padded interior surfaces abound, and the optional brown leather upholstery looks quite upscale, as does the wood trim. The audio system includes volume and tuning knobs, while the climate controls consist of rotary temperature knobs with fan speed and mode adjusted with pushbuttons, all being within easy reach.

The power driver seat (standard on all but the base model) includes a tilt cushion and power lumbar adjustment – great comfort advantages – and there’s plenty of headroom and legroom. In back, headroom with the moonroof (standard on all but the base model) is only adequate for those up to about 6-feet tall, but they’ll also have good legroom. Notable is that the rear doors open quite wide — nearly 90 degrees — making installation of a child seat easier.

Ride quality didn’t get much of a test on our Asheville, NC, drive route, though the Forester seemed to handle bumps quite well. By contrast, the winding mountain roads provided a fine test of handling, and the Forester impresses in this regard. 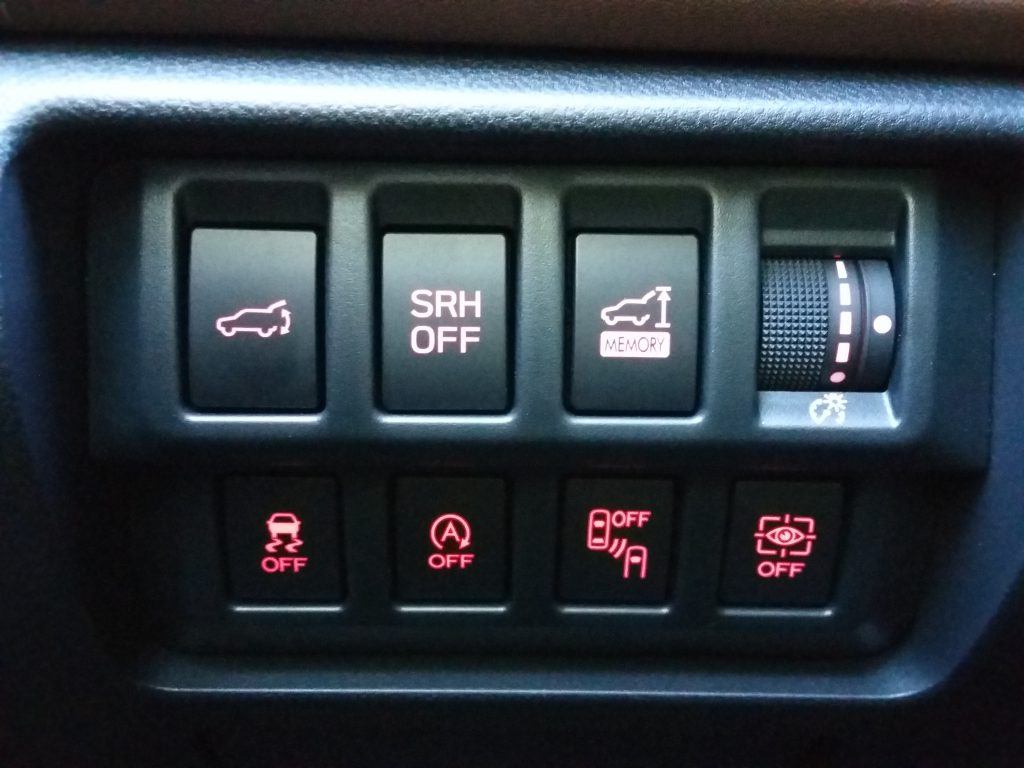 A control panel to the lower left of the steering wheel includes a button that allows you to turn off not only the auto stop/start function (bottom row, second from left), but also deactivate some of the safety features. If you’re wondering (we were), “SRH” (top row, second from left) stands for “Steering Responsive Headlights” — what are generically called “adaptive headlights,” which means they turn with the steering wheel — though we’re not sure why you’d want to turn off the “adaptive” part; we find that to be really nice at night.

But if there’s a chink in the Forester’s armor, it’s the powertrain.

New for 2019 is an engine stop/start system. Although you can deactivate it with the push of a left-side dash button, when left on, it takes a moment to start the engine after lifting your foot off the brake, and it’s not entirely transparent in operation (though the same can be said for most such systems). And oddly, the Forester’s EPA city rating didn’t improve over last year (though both highway and combined did), which seems to defeat its purpose.

The bigger problem, however, is noticed in full-throttle acceleration. Despite more horsepower and a wider-ratio transmission, flooring the throttle from a stop results in somewhat leisurely progress. However, the transmission “kicks down” fairly quickly when the throttle is stabbed at speed, so that’s a plus, and acceleration is pretty good thereafter. To be fair, the powertrain feels fine in normal driving, but keep in mind that – should you be in a hurry – flooring the gas from a stop really doesn’t give you much more oomph than just putting it down halfway. 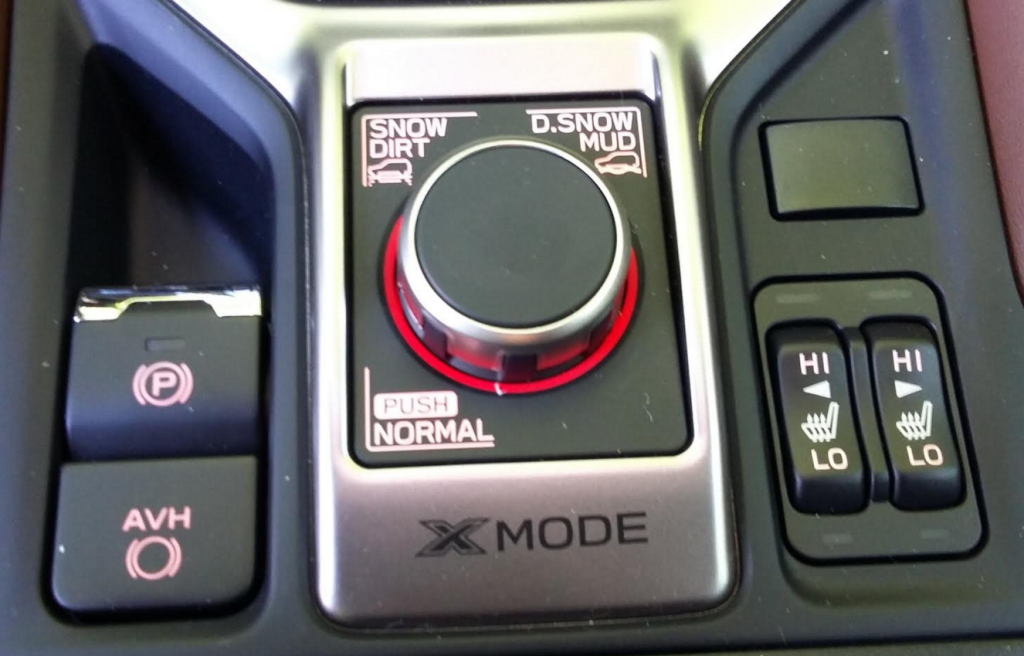 Even the base model comes with an Auto Hold function (AVH button lower left), which allows you to take your foot off the brake during long stops. But to get the X-Mode AWD system with its Snow/Dirt, Deep Snow/Mud settings — along with hill-descent control — you have to take one step up to the Premium.

One more thing: While the engine still produces Subaru’s legendary “flat-four throb” under acceleration, it seems that highway wind and road noise are fairly well controlled, as is bump noise, though a better test will come when we get a chance to drive a Forester around our Chicagoland headquarters.

A graph of Forester sales over its previous four generations shows an incredible ramp-up over the past few years, with it still selling strongly at the end of the 2018 model run. And though the 2019 redesign brings a $500 higher starting price, that not only includes the newly standard CVT automatic transmission, but also the EyeSight suite of safety equipment, along with a few other features. Other models also seem like better values. So if the roomy, capable Forester wasn’t on your shopping list before, it really should be now.

Save for a slightly lethargic powertrain — which is only noticed if you floor the gas from a stop — the spacious, well-equipped 2019 Subaru Forester is hard to fault and a tough value to beat.