Auto safety has come a long way since the 1950s. Check this ad for the Irvin Auto Safety Harness for “children 8 months to 6 years,” courtesy of CG Auto Publisher (and proud father) Tom Appel. (How does he make time to find such things?) (Car Safety for Kids) 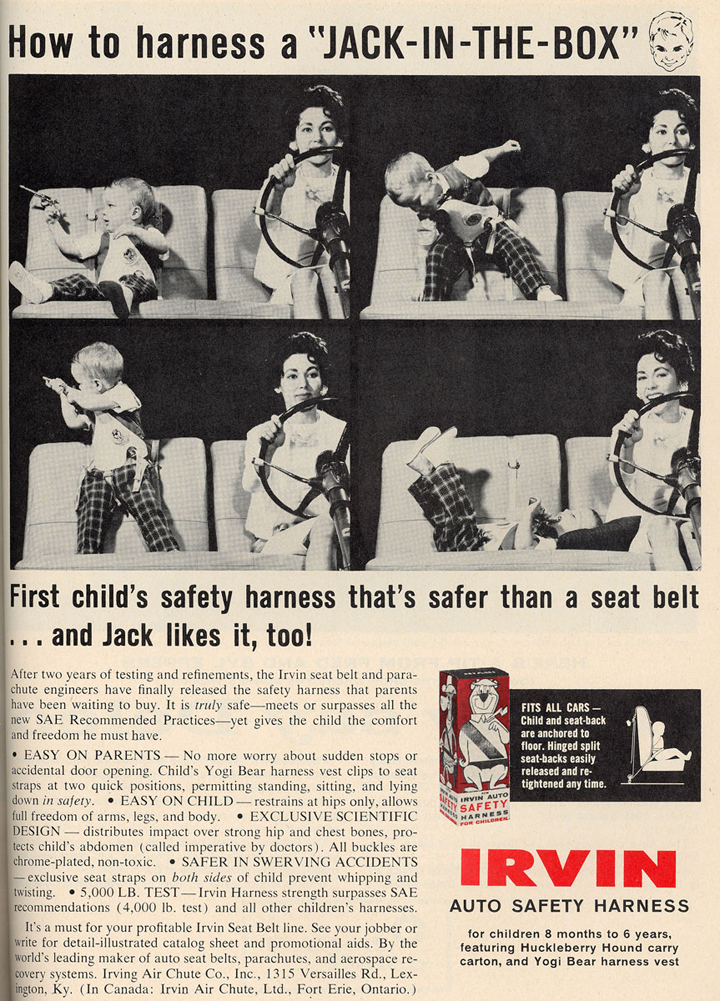 How well were you “harnessed” as a child?

We know it’s from the “Happy Days” era because of (a) the typefaces and layout, (b) the period “Impale-O-Matic” steering column, (c) the driver’s proto-Jackie Kennedy attire, (d) the toddler’s nerdy shoes and plaid pants, and (e) the checked-cloth seat upholstery, perhaps an “E-Z Fit” cover from the June Cleaver Collection at Western Auto.

We can also date this ad from the product package featuring Yogi Bear and Quick-Draw McGraw, two of the early Hanna-Barbera TV cartoon characters that began appearing in 1958 or so. I should know. I watched ’em faithfully, often with my dad, bless him.

Before there were child seats…

Speaking of Western Auto, the words “your jobber” and “promotional aids” in the last paragraph indicate that this ad appeared in a trade publication aimed at new-car dealers and auto parts-and-accessories stores. This may explain why no price is shown, though that might have been negotiable, depending on the size of a customer’s order.

Another clue to the target audience is the line about this product being “a must for your profitable Irvin Seat Belt Line,” indicating that the Irvin Air Chute Co. had expanded from making “parachutes and aerospace recovery systems” (whatever those were) to selling aftermarket seatbelts, meaning lap belts (the only type we had) to be installed after vehicle purchase.

Like any good promotional piece, this one provides helpful point-of-purchase pitches for a sales staff to use: “Easy on Parents,” “Easy on Child,” “Exclusive Scientific Design,” “Safer in Swerving Accidents.” That’s just as well, because car safety was not a big consumer concern back then. Ford Motor Company learned this the hard way by spending big to develop optional “Lifeguard Design” features—lap belts, padded dashboards, slightly less-dangerous deep-dish steering wheels—only to find that few buyers wanted them.

As for the Irvin harness, I’m no safety expert, but this might have been a pretty effective child restraint, given what was then known about minimizing the risk of injury and death for vehicle occupants. It was certainly better than nothing. On the other hand, I’m bothered that the harnessed “Jack” can still move around so much—to the point of distracting Mom in the lower-right photo—and we all know how dangerous distracted driving is. (By the way, where’d that pillow come from?)

But what really creeps me out is that Irvin would promote a child-safety product with images of a kid wielding a gun. Talk about mixed messages! It’s a toy gun, of course, but you know what they say about acorns and mighty oaks, and “Jack” seems to like this even more than his harness—perhaps a little too much. I can’t help wondering whether this boy grew up to be a serial killer or perhaps committed suicide (lower-right photo again). Or maybe he met an untimely end in a car crash because he refused to use a seatbelt.

Maybe we haven’t come such a long way after all.

How to get your car stolen…