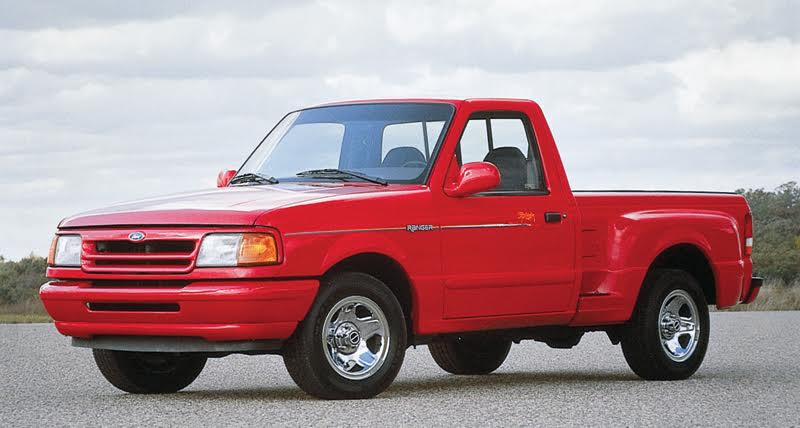 Initially only available with Ranger’s regular cab on a tidy 108-inch wheelbase, Splash’s unique proposition was a pickup bed with projected fenders. In advertising, Ford claimed it was the “world’s first and only compact flareside.” Presumably for styling reasons, Ford abandoned the classic fenderside recipe of stamped-metal fenders and separate step plates attached to a steel bed in favor of smoothly formed plastic. In its April 1993 issue, Car and Driver described the bed’s side panels: “Each one is made from a single piece of sheet-molding compound, a non-corrosive, dent-resistant composite of plastic and fiberglass that’s heated and molded into shape.” These pieces attached to a steel cargo box that was narrower than the unit used on other Rangers. 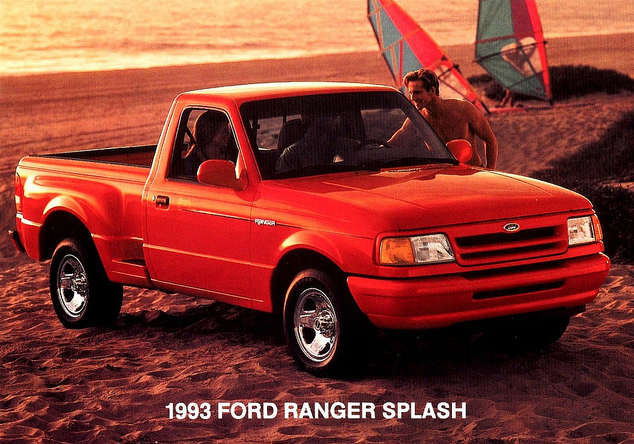 While the bed was meant to recall trucks like the classic F-100s of the Fifties, overall Splash was meant to be a contemporary pretty face. Outside there was a monochromatic paint scheme with a body-color grille, bumpers, and side mirrors. A limited color palette comprised Vibrant Red, Brilliant Blue Metallic, Oxford White, and Raven Black. Colorful tape stripes and Splash nameplates adorned the cab sides and tailgate. Inside a cloth-covered 60/40-split front bench seat was standard, with a console and bucket seats optional.

Splash came in rear-wheel- and four-wheel-drive versions. The rear-drivers included specific suspension tuning that allowed for lowered ride height and, according to C/D, better handling.

The big news for 1994 was the addition of Splash SuperCab variants. The extended cab made room for a pair of center-facing fold-down jump seats or additional in-cab storage. The Splash SuperCab came in 4x2 and 4x4 models, with the former starting at $14,014 with the 2.3-liter engine.

All ’95 Rangers picked up a redesigned interior, along with a driver’s-side airbag and four-wheel anti-lock brakes; previously only the rear drums had anti-lock control. The 2.3- and 3.0-liter engines received modest power increases. Outside, Splash had a new grille and fresh paint colors. In 1996, Splash’s flareside bed became optional on certain other Ranger models. Starting in 1997, a five-speed automatic was optional with the 4.0-liter V-6.

The Ranger received a fairly major redo for 1998, but it was Splash’s final season. Front-end styling was revised and the regular cab was made three inches longer to increase legroom and behind-seat storage. Ford’s Twin I-Beam front suspension was replaced with a new setup utilizing upper and lower control arms. Rear-drive trucks used coil springs up front, while 4x4s had torsion bars and a revised four-wheel-drive system. Newly optional on SuperCabs was a pair of rear-hinged doors that improved access to the rear section of the interior. Base prices covered a $15,045-$19,695 spread.

• Choice of regular- or extended-cab versions, each in rear-drive or four-wheel-drive variants.

• Rangers really were compacts, so interiors are cozy at best.

Splash was all about style, and we think a rear-drive 1993 or ’94 regular-cab model in Vibrant Red is the looker of this bunch. But if a SuperCab is your choice, search out a ’98 with the optional rear-access doors.