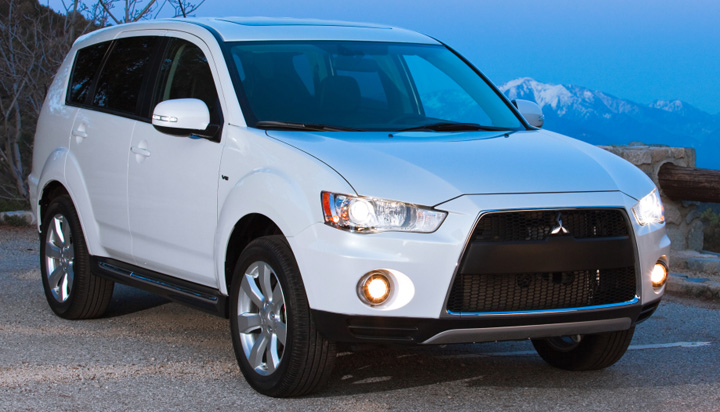 Note: This report supplements Consumer Guide Automotive’s full report on the 2012 Mitsubishi Outlander, a compact SUV that starts at $22,345.

Acceleration: Outlander has been little changed since its 2010-model update, when Car and Driver timed an AWD GT at 7.5 seconds 0-60 mph. My tester felt about that quick off the line, but I can’t agree with my colleagues that the automatic transmission is “prompt and responsive.” It’s just another modern slushbox with economy-oriented programming that upshifts as soon as possible and is reluctant to kick down for passing or gunning out of a low-speed corner. Left to its own devices, this transmission can seem to take forever to answer the throttle in some situations.

Fortunately, the steering-wheel paddles can be used in regular Drive as a “temporary manual” mode to furnish extra power when you want it instead of when the transmission thinks you need it. But shifting an automatic gets tiresome in change-of-pace traffic, and it shouldn’t be necessary in a family-focused vehicle anyway. Part of the problem is that even the V6 Outlander is slightly underpowered—or, more precisely, “under-torqued,” as the engine musters a modest 215 pound-feet that isn’t fully on tap until a fairly lofty 3750 rpm. Aggravating matters, this SUV is relatively heavy for its size, though some rivals are porkier.

Fuel Economy: I averaged 19.5 mpg for about 130 miles of Phoenix-area driving that was pretty evenly split between city and freeway. That’s unexceptional by absolute standards, but a good 2.5 mpg better than the CG staff managed with an AWD GT in similar driving, and it’s consistent with the 19-mpg EPA rating.

Ride Quality: ES and SE Outlanders, which I haven’t driven, may do “an OK job of absorbing sharp bumps,” but this GT registered every crack, ridge, and divot despite comfort-oriented Goodyear Eagle LS2 all-season tires of appropriate size (P225/55R16-97H). The ride was far from harsh, and the suspension tuning checked pitch and float over large humps and dips pretty well. Still, as the main report notes, rivals such as the Honda CR-V, Toyota RAV4, and Mazda’s new CX-5 are more composed and comfortable overall.

Steering/handling/braking: This vehicle is pleasant and easy to drive, but also tall and narrow, so even the sports-oriented GT can’t match the agility and stable cornering feel of the CX-5 and VW’s Tiguan. I agree that Outlander does wander in crosswinds more than most compact SUVs. The tester’s braking performance was good, if unremarkable, in routine driving.

Quietness: The main-report comments echo my experience. Outlander is now really behind the class curve for refinement—no surprise, perhaps, as this design has been around since 2007 and has not been substantially changed since.

Controls: I thought the climate-control positioning is OK, mainly because the controls themselves are so large and simple. I didn’t fiddle much with the navigation system, but found the map display quite legible in most light conditions. I know many people don’t play CDs in cars anymore (or much of anywhere else), but I still dislike having to power open a dashboard screen to load a disc. It’s so 1990s. Agree the gauge-cluster display can be hard to read, especially the bar-graph fuel and temperature gauges, which are quite ’90s as well. An “info” button calls up various trip data on the little screen, but you must cycle through a fairly long menu if you go past the item you want, and the button is partly masked by the steering wheel—a small irritation.

Details: Mitsubishi has forever trailed “first-tier” Japanese brands for interior materials and finish, and the Outlander continues that dubious tradition. More soft-touch surfacing was part of Outlander’s 2010 update, but this cabin is still dominated by acres of budget-grade hard plastic, and the “soft” surfaces are so thinly padded that you scarcely notice them—although actually I did, as when my left elbow accidentally made painful contact with the brick-hard door armrest. The main report notes that GTs have “padded leather on the doors and dashboard,” but if that’s real cowhide, I’ll eat it. This GT came to me after over 11,500 hard miles at the hands of other journalists, and the interior was already looking tired. In addition, the 3rd-row seat’s folding mechanism had loosened up a lot, and a couple of trim strips back there had lost their moorings. Last but not least, releasing the exterior door handles can produce a tinny clang that spoils what is otherwise a pretty solid-feeling vehicle.

Room/comfort (front): My colleagues say “the tall 3rd-row seat partially blocks the view astern,” but it’s the headrests that actually get in the way. They’re removable, of course, but there’s no dedicated storage for them, so they will inevitably get tossed around on the floor and end up looking prematurely scruffy.

Room/comfort (rear): Let’s note that SE and GT Outlanders come with a sliding 2nd-row seat that allows favoring cargo room or back-seat space as needed. It moves about 8 inches total, and must be fully aft for mid-cabin occupants to have any kind of leg space. The 3rd-row seat is indeed a token gesture. It’s little more than two narrow, lightly padded boards that are hinged at a 90-degree angle and sit right on the floor. As a result, occupants must adopt a bolt-upright posture and have no place to dangle legs. And there’s virtually no legroom at all if the 2nd-row seat is fully aft. This is clearly an afterthought bit of market-driven silliness, installed only because 3-row SUVs outsell 2-row models regardless of size and no matter how useless the 3rd row may be. Good grief.

Cargo room: We used the test GT to transport some fairly bulky items to a charity thrift store, and found that it swallowed everything with room to spare. So at least in this respect, the Outlander is one of the better compact SUVs. Just as nice, the little drop-down tailgate makes a handy floor-level platform for sliding heavy objects in and out. But my colleagues are so right about the 3rd-row seat. It is indeed way too tricky and tedious to put up and down, and in my mind that makes it rubbish.

CP Says . . . My colleagues are too polite to be this blunt, but the Outlander has far more vices than virtues, and that’s reason enough to prefer one of its rivals, starting with the deservedly popular Honda CR-V and Toyota RAV4. Outlander is another example of why Mitsubishi isn’t cutting it in the U.S. market. The basic design wasn’t that competitive to begin with, and the lack of meaningful change over several years has put it even further behind the class leaders in most respects.

But forget all that. Mitsubishi introduced a redesigned Outlander at the early-2012 Geneva Auto Salon in Switzerland, and some sources predict a U.S. version could start sale during 2013, possibly sourced from the company’s now-vacant plant in Illinois. Even more intriguing, Mitsubishi has developed a plug-in hybrid model that might be available here if all the planets and stars align just so. But given this brand’s recent record in America, I won’t count on anything until I see it.