Volkswagen IDs this car as “European Golf VII” with “expected U.S. launch as a 2014 model”

Volkswagen’s new seventh-generation Golf compact car has been unveiled ahead of a planned U.S. debut in summer or fall of 2013. Though the information released so far applies to Euro-spec versions that start sale before 2012 is out, American-market Golfs should differ only in available powertrains, features, and model choices.

The 2014 Golf reprises 2- and 4-door hatchback body styles and front-wheel drive, but it is completely redesigned on VW Group’s new MQB modular-matrix architecture. (MQB gets its first outing in the U.S. with the Audi division’s new 2014 A3 premium-compact sedan.) Styling maintains a traditional Golf look—no surprise for the VW brand’s longtime top-selling model—but manages to be sleeker, crisper, and a bit more muscular than today’s Mark VI. Increased interior space was a major design goal, so wheelbase has been stretched a significant 2.3 inches to 103.7. Overall length grows by 2.2 inches to 167.6. The new Golf also spreads a half-inch wider (at 70.8 inches) and sits nearly an inch lower (57.5 inches) on slightly wider axle tracks. VW says these changes contribute to a 0.6-inch gain in rear legroom and over an inch more shoulder width front and rear. The cargo bay is larger too, adding a claimed 1 cubic foot to reach 13.4, plus a slightly wider floor and lower load lip.

Despite its modestly larger footprint, the 2014 Golf is up to 220 pounds lighter than comparable Mark VI models, thanks mainly to a new unibody that makes greater use of high-strength steel. Other weight-saving measures include a more aluminum-intensive suspension, new seats, and a lighter electrical wiring loom. Speaking of suspension, European Golfs continue with front struts and rear multilink geometry. The Mark VII GTI also retains this layout, but mainstream U.S. Golfs may reprise a twist-beam rear axle to hold the line on sticker price.

On the other hand, U.S. Golfs are likely to get a more-sophisticated base engine, swapping today’s 2.5-liter 5-cylinder for a lighter, revvier 1.8-liter turbo-four. Based on the 2.0-liter GTI unit and perhaps equipped with an idle-stop system for U.S. sale, the 1.8T makes 158 horsepower and 185 pound-feet of torque in European tune, versus the fiver’s 170 horsepower and 177 pound-feet. VW has already confirmed this change for 2014 Jetta compact sedans, and the sporty/performance Beetle will likely follow suit at about the same time. The 2014 Golf should also be available stateside with VW’s familiar 2.0-liter TDI turbodiesel-four, perhaps boosted a little. The GTI’s gasoline 2.0T may also be tuned for a bit more power. All engines should team with 6-speed manual transmission or optional VW DSG 6-speed automated manual.

Besides more space, the 2014 Volkswagen Golf interior features a redesigned dashboard with a center control console newly canted toward the driver, plus electronic parking-brake actuation (replacing mechanical) and a standard dashboard touchscreen. The last, part of a new “modular infotainment architecture,” will come in three sizes depending on model and options: 5.0-inch black-and-white, 5.8-inch color, and 8.0-inch color 3D.

In Europe, the new Golf will offer a variety of premium-class safety and assistance features, including adaptive cruise control with low-speed automatic braking, lane-keeping assist, drowsy-driver alert, and automatic park assist. We’d guess that pricing issues related to continued Euro-zone sourcing will keep most of these from U.S. customers. Then again, such features are getting cheaper all the time and more mainstream small-car buyers here are willing to pay for them, so VW may well risk sticker shock in an effort to one-up Golf rivals such as the Chevy Cruze, Dodge Dart, Ford Focus, Honda Civic, and Nissan Sentra. 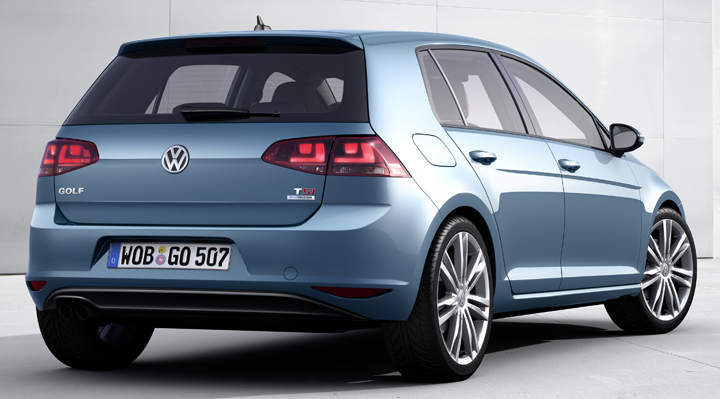