Courting Young Buyers in the New Economy: Scion’s Vice President on the New iA and iM

The 2016 Scion iA and the 2016 Scion iM began arriving in dealerships nationwide last week, ushering in an important new chapter in Scion history. The iA (a subcompact sedan) and iM (a compact hatchback) are really the first “mainstream” Scions aimed at addressing the shifting demographics of Scion’s target market (70 percent of which didn’t even have a driver’s license when the brand was introduced). 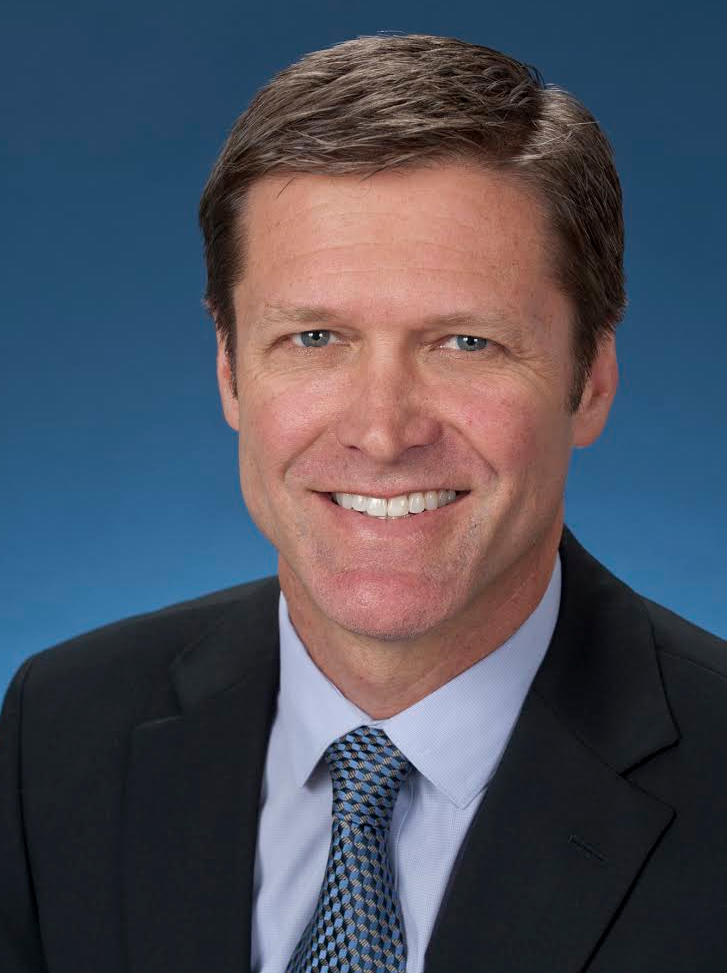 Doug Murtha is group vice president of the Scion brand.

Yes, Scion has already been around that long. Initially launched in California in 2003 and then rolled out nationwide in 2004, Toyota’s youth-market division made its mark by using unconventionally styled vehicles (most notably the original xB) and edgy “underground” marketing to appeal to young buyers who thought Toyota vehicles were too stodgy.

The strategy worked well early on, but an upstart brand can only remain the new cool kid on the block for so long. Plus, the financial crisis of 2008 had lasting effects on how car buyers shop—even at the accessible, entry-level end of the market in which most Scion products reside.

In terms of Scion’s current lineup, the xB and the short-lived iQ micro car are out after the 2015 model year (the forgettable xD hatchback was dropped after 2014). The tC coupe and FR-S both continue into 2016, but the tC is showing its age, and the enthusiast-darling FR-S hasn’t been selling in great numbers. Scion really needs the iA and iM to succeed in the marketplace, and we think both vehicles are good enough to do just that.

You can read our First Spin road-test reviews of the iA here and the iM here. Below are excerpts from a candid round-table discussion with Scion Group Vice President Doug Murtha earlier this year. His quotes shed some light on the brand’s market-research processes and its plans for revitalization.

On the evolution of Scion’s youth-oriented marketing strategy:

Scion has always—when we develop communication, when we seek out new product, we do that with a subset of the 18- to 34-year-old market in mind. That’s true when we came to market, and that’s true today. As I said, the emphasis on subset, right? We’ve got Corolla going after a youth market on the Toyota side. We’ve got CT and IS on the Lexus side. So we’re not trying to broad brush the entire market.

When you think about it, we launched in 2003. It’s now 2015. 70 percent of that bucket is a different group of folks. It’s a fluid population. In our assessment, they have a very different collective experience than the group we targeted coming out of the gates, and we’ve had to make some adjustments for their current balance sheets and their current mindset. So I think what you see in the way of products we’re bringing to market, it’s really a reflection of our assessment of where they are and what they’re looking for in the product.

So, okay, we’re still going after a customer who doesn’t want mass market, right? They may look at a Corolla and think, yeah, okay, that’s alright. It’s better looking than the last one. By virtue by the fact that we put 300,000 on the road each year, it’s not of interest to them, right? These people do have an interest in niche brands and something that’s a little different than what everybody else is driving. That doesn’t manifest itself in the earlier version of our vehicles, which was 22-inch rims with dubs and bright green paints. That’s not what they’re looking for. They want a far more subtle version of something different that’s not as far out on the limb on the quirky spectrum, and we’ve tested that. We’ve put some stretch concepts out there. Again, we’re not talking about Corolla buyers when we test these things. There’s a little appeal there, but they will not vote with their dollars for that kind of product today versus the buyers we were trying to appeal to 10 to 12 years ago. 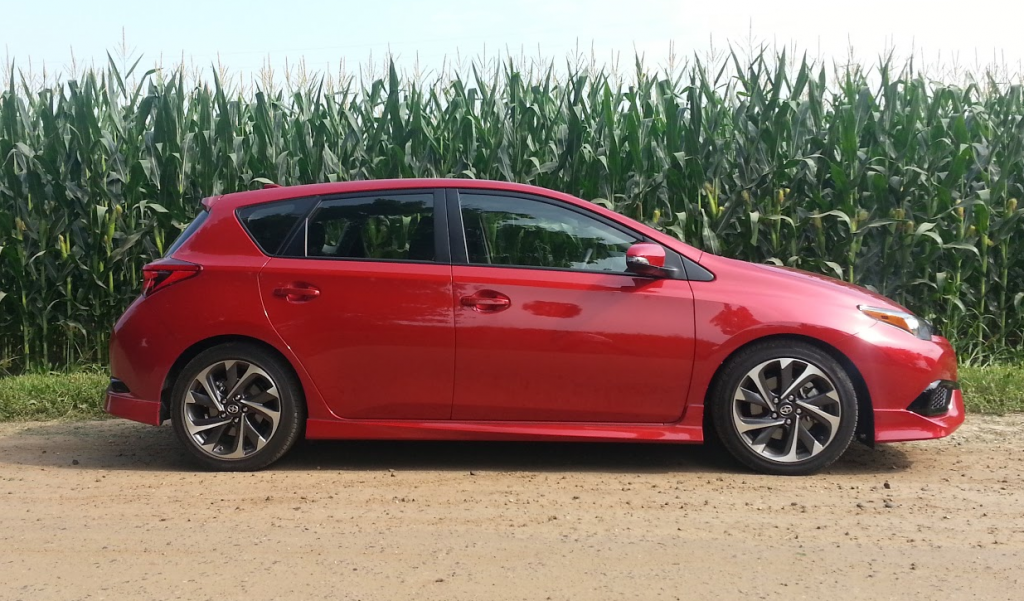 The Scion iM pulls off “zippy meets practical” quite well. The racy-looking alloy wheels are standard.

On how market research shaped the iM’s 4-door hatchback layout:

The big selling point we think for that, in speaking for most of the consumers, is just the versatility angle. A lot of these folks, more so than 10 to 15 years ago, are living in single-vehicle households, and they need that vehicle to do a lot more things than they did in the past. So seats up, this is a vehicle that they see themselves grabbing some friends and throwing some gear into the back and taking that weekend getaway. Many of them will acknowledge they may actually not take nearly as many weekend getaways as they’d like to, but just vehicle as enabler was an important selling point.

And then also just the seats-down format­–I think at one point there was a bit of a stigma to the hatchback body type. A few of our competitors came to market with hatchbacks and called them something other than that just out of avoidance of the term, and I think that period is over. We’ve seen some reasonable inroads with this body type in the market, and we see that trend continuing. So, as I said, seats down, this is really a vehicle that you could stick a bike in the back, you stick pets in the back. You could go to the home-improvement store and do a lot of different things with the product.

I think there’s some dated notions as to what a sedan means. I think 20 years ago, you either got the good-looking car in coupe form, or you got the dowdy, functional form in the sedan that I think, starting in the luxury market, a lot of manufacturers have been able to bring both dynamics and design to that body type and really eliminate the stigma of the sedan. [The iA] is going into a segment that’s traditionally been associated with econobox rental cars, and we think this vehicle’s anything but. We think it has enough drama in the design. There are enough polarizing elements in the front face of the car. We got wrung up by some of the media in New York [at the New York Auto Show, where the iA was introduced—ed.], and we were actually happy about that because I think that says this isn’t for everybody. And we heard that in our research with consumers as well. And for the customers who did select this vehicle as their top choice, that was one of the key selling points. This doesn’t look like anything else on the road, and that’s, within limits, what I’m looking for. 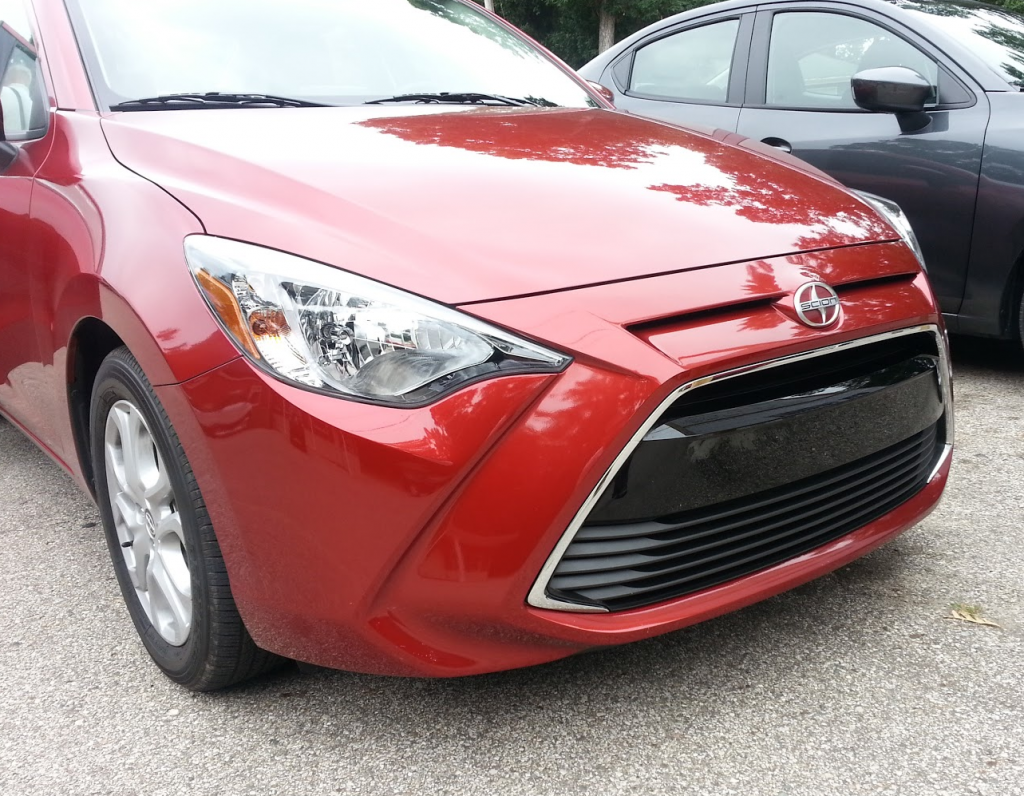 The iA’s aggressively styled grille is a polarizing design element, but Scion’s market research showed that it tested quite well with potential buyers.

On the decision to partner with Mazda to bring the iA to market (The iA is essentially a restyled, rebadged 2016 Mazda 2 sedan. At this time, Mazda has elected to not offer the 2016 Mazda 2 hatchback or sedan in the U.S.):

I don’t think Toyota’s alone in this. I think you’re seeing, industry-wide, a lot of manufacturers are entering into various partnerships to either benefit from each other’s strong points or to build projects that make sense for both companies. Toyota’s been doing a lot more of that recently, to be honest. That’s coming straight from the top. Mr. Toyoda wants to be learning from other companies and doing some things differently. We partnered with Tesla on the RAV4 EV projects. We’ve got a partnership with BMW right now. We started and concluded a study with Ford. We did some work with them for a couple of years. It didn’t wind up materializing into anything, but it was a good opportunity for us to work collectively on something.

Obviously, in the case of Scion, we’ve got the Subaru partnership [which begat the Scion FR-S and Subaru BRZ—ed.]. I think that was a product that neither company would have been able to justify doing alone. By combining resources from both sides, one team doing the manufacturing, we brought a car to market that wouldn’t have made it to market. So I think Mazda is just another project in that line of partnering with other folks and trying some different things. In that particular case, Mazda had not independently had a plant outside of Japan. They obviously worked jointly with Ford on some things here in the U.S., but Mexico is their first plant outside of Japan, and I think they were interested in maybe some of the Toyota experience in operating something like that. So that may have been one of the benefits for them. 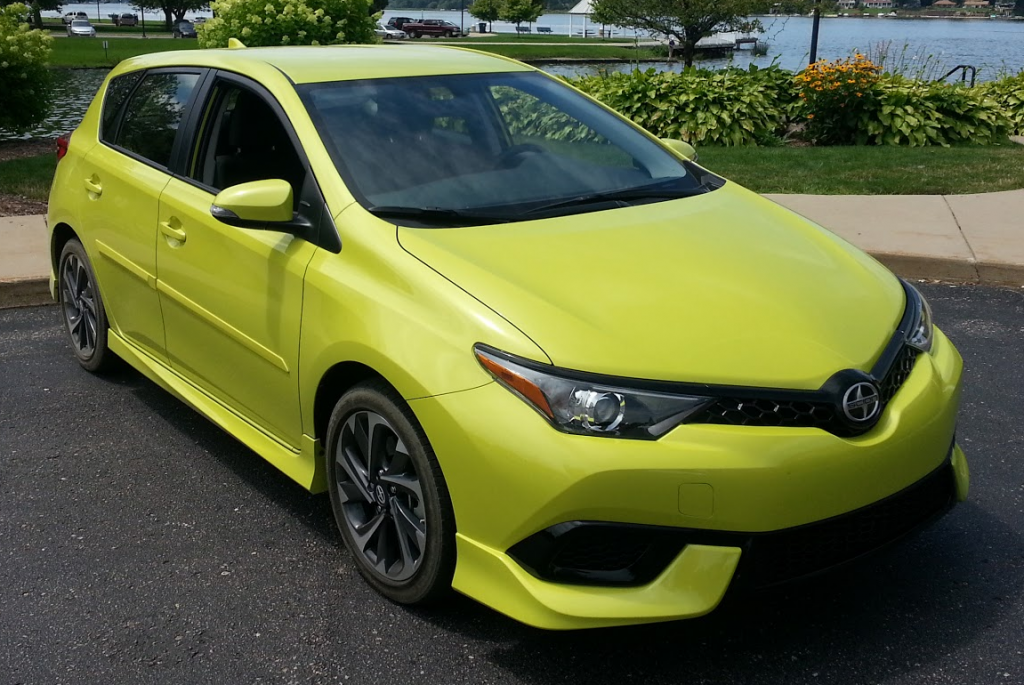 For us, they were going to build a product that was a hole in our lineup. We do not have an entry subcompact sedan. We have a hatchback; we don’t have a sedan. So there’s an opportunity for us to not only send a project to the U.S., but send one to Mexico and Puerto Rico and Canada and some other markets that are far more dependent on that segment than we may be. Again, there was something in it for both companies. And talking to anybody who was very closely involved with that, we learned some things from Mazda. Their chief engineers were quick to say they learned some things from working with us, and I think you’re going to see more of it going forward in the future.

Check out the rest of the Scion lineup

On the millennial generation’s appetite for self-driving cars versus other demographics:

This is purely my opinion as opposed to anything I’ve seen in terms of research. I would say it’s similar to their interest in hybrids. So I tend to get the question, would Scion be interested in offering a hybrid? Absolutely. As we talk to younger consumers about their interest in hybrids, they’re all in. They love the idea. They love the fuel economy. They love everything about it. Until you ask them how much they’re willing to pay [extra] for it—that’s zero. So they pretty much expect that if you’ve got that technology available, you’re still going to make it, going to bring it to market at the same price point as a conventional engine. So we’ve seen a little bit of that on the Prius family where Prius C is arguably–we would’ve executed it differently–but from a price-point standpoint, from a small-car standpoint, that’s not too off the mark of what we would do within the Scion brand. Last I checked, that buyer’s actually older than the buyer of the Prius liftback.

So, a kind of roundabout answer: I think there is interest in the technology. They’re getting around with Uber and all of the rest of it most of the time anyway. Somebody’s driving them. I think they’re open and far more comfortable with technology. I think when it comes to the ability or willingness to pay for that, they’re not there yet. Reminder, that’s just me speculating and connecting some dots from some other discussion. I haven’t seen any research on the youth interest in the technology.