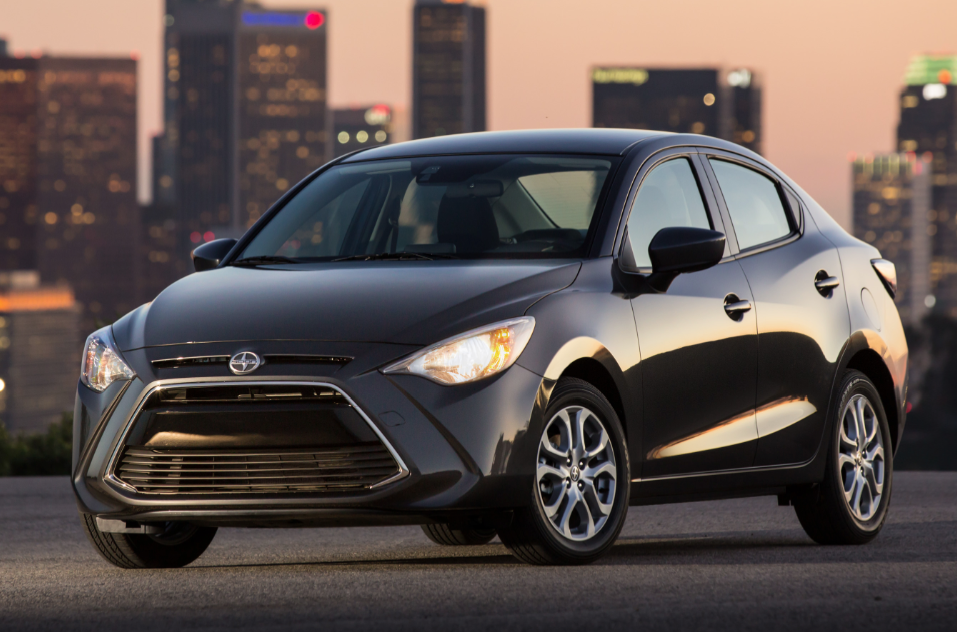 Joining the Scion stable this fall is the subcompact iA, the first sedan in the company’s 12-year history. Well equipped with automatic transmission and destination, it starts — and ends — at $17,595.

Those who frequent their local Scion showroom are going to see some big changes come this fall. Leaving after the 2015s sell out are the tiny iQ and the compact xB “tall wagon,” the latter being the 2nd generation of the box that essentially built the brand. Since the subcompact xD departed after the 2014 model year, that means the only carryovers from the current Scion corral are the tC sports coupe and the FR-S sportier coupe.

But that doesn’t mean Scion is abandoning mainstream America, because due to go on sale September 1 are two new cars that will compete in the subcompact and compact classes.

Oddly, the newcomers share virtually nothing besides their Scion badges. The subcompact iA is a sedan built in Mexico at a new joint-venture plant with Mazda (and it’s based on a Mazda design), while the compact iM is a 4-door hatchback built in Japan that’s very similar to a hatchback version of the Corolla sold in Europe as the Auris.

We’ll cover the iM separately, as here we’re going to discuss the iA, which is expected to be the bigger seller.

If you look at the iA’s swooping body lines – and its tech-oriented interior – you could almost guess this is a Mazda-based car; in both regards, it closely mimics the theme of the Mazda 3 sedan, but in slightly reduced scale. (Word is that Mazda might sell a hatchback version of the car in this country as the next-generation Mazda 2, but that’s yet to be confirmed.) It isn’t until you get to the front end that it breaks from the Mazda mold, as it turns that company’s signature “smile” upside-down to sport a gaping-mouth grille that would make any hot-rodded Mitsubishi envious. Some might find the look absurdly menacing for a car with just 106 horses under its hood, but at least you can’t accuse it (as with many subcompact cars) of being “cutesy.”

Which brings us to the technical specs. The 106 horsepower (and 103 lb-ft of torque) come courtesy of a 1.5-liter 4-cylinder engine – the only one offered – which can be linked to either a 6-speed manual transmission or 6-speed automatic, both driving the front wheels. Even with the car tipping the scales at just 2400 lbs, that’s hardly a sporting power-to-weight ratio.

But while power ratings might not be impressive, the EPA ratings are. The automatic trumps its manual counterpart (and most subcompact rivals) with a 33 city/42 highway estimate, while the manual comes in at 31/41. The former beats all gas-powered 2015 cars save the Mitsubishi Mirage, which is an even smaller and more basic conveyance.

As has been Scion custom, the iA is offered in only one trim level with no factory options; thus the only choices a buyer has to make regard transmission and paint color. (However, there is a dealer-installed navigation system available that should cost about $400.) That’s part of what Scion calls its “Pure Price” program, which also includes a no-haggle policy; what’s on the sticker is what you pay. And in this case, what’s on the sticker is $16,495 for the manual, $17,595 for the automatic. And those prices include the $795 destination charge.

Of course, with no trim levels and no options, that means these are “Take what you get” cars. But what you get is quite a lot.

Scion aims the iA at young urban buyers, and the equipment list reflects that. It’s almost expected nowadays that air conditioning, power windows/mirrors/remote locks, and even USB/Aux jacks and Bluetooth will be offered on a car – and increasingly are standard – and those all come on the iA. But perhaps less expected are (take a deep breath) a rearview camera, automatic climate control, cruise control, keyless entry with push-button start, 7-inch multimedia touchscreen, voice recognition, connected services (including Aha, Pandora, and Stitcher), and a low-speed pre-collision system (more on this last one later). In other words, this is a generously equipped car at a surprisingly modest price.

And that’s really the iA’s strong suit … well, that and its stellar fuel economy. Because in most other regards, it runs pretty much par for the subcompact course. Which isn’t a bad thing. 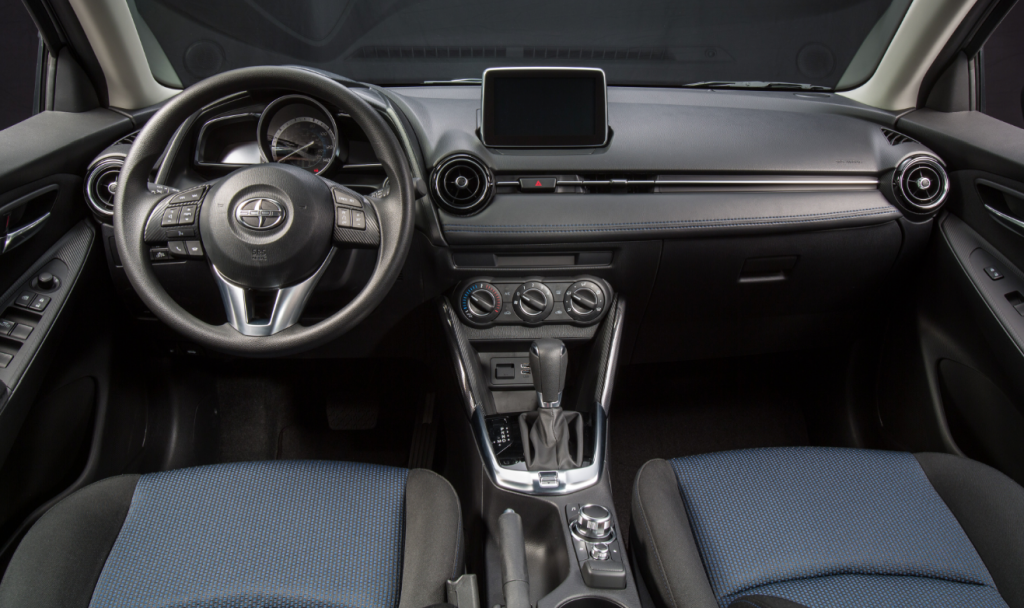 If the interior looks as though it came from a Mazda, that’s no coincidence; the whole car is based on a Mazda design. Prominent are that company’s signature protruding dashboard screen and console-mounted control knobs.

There is only one interior look offered – essentially black with some matte-silver trim and colored seat inserts – and it’s dominated by hard plastic. Only a swatch across the dash face and the door armrests boast thin padding, and since there’s no console box, there’s no center armrest (nor are there fold-down armrests). The driver seat has height adjustment and is reasonably comfortable, and the tilt/telescopic steering wheel lets you fine-tune a driving position. The view out is good to the front, just OK to the sides, and fairly restricted to the back corners, though the rearview camera compensates somewhat. Oddly, when swung to the side, the sunvisors don’t extend to cover the whole window.

The audio system mimics those found in most current Mazdas. A separate screen sits atop the dashboard, with all functions being controlled by two knobs (the smaller of them being for on/off and volume) and some buttons on the center console. This arrangement might seem “high-tech” to some, but it takes acclimation to figure out, and even then requires multiple steps to perform many basic functions. Far simpler to use are the three rotary knobs governing the climate system, though they’re set rather low, and the far one – which is for mode – is a bit out of easy reach. The instrument cluster features a large speedometer in the center, but the tachometer – which is really useful only with the manual transmission – is tiny and set far off to the left.

Interior storage is on the spare side, but it’s useful enough. There’s a modest-sized glovebox, a large forward console bin hosting an Aux jack, two USB plugs, and a 12-volt outlet, a small bin at the rear of the console (more easily accessible to the back-seaters than the driver), and small map pockets in the doors.

The trunk is fairly large for the class, it’s wide at the rear, and there’s a little bit of underfloor storage. But the cargo floor is about 8 inches below the trunk lip, creating a high liftover; the sickle-shaped trunklid hinges dip into the load area; and the folded rear seatbacks (the release is conveniently located in the trunk) rest a good 5 inches above the level of the cargo floor, making it difficult to slide long items all the way forward. In some cars, the cargo floor can be set on a higher plane so that it’s level with both the lip and the folded seat backs, but that didn’t seem to be doable. 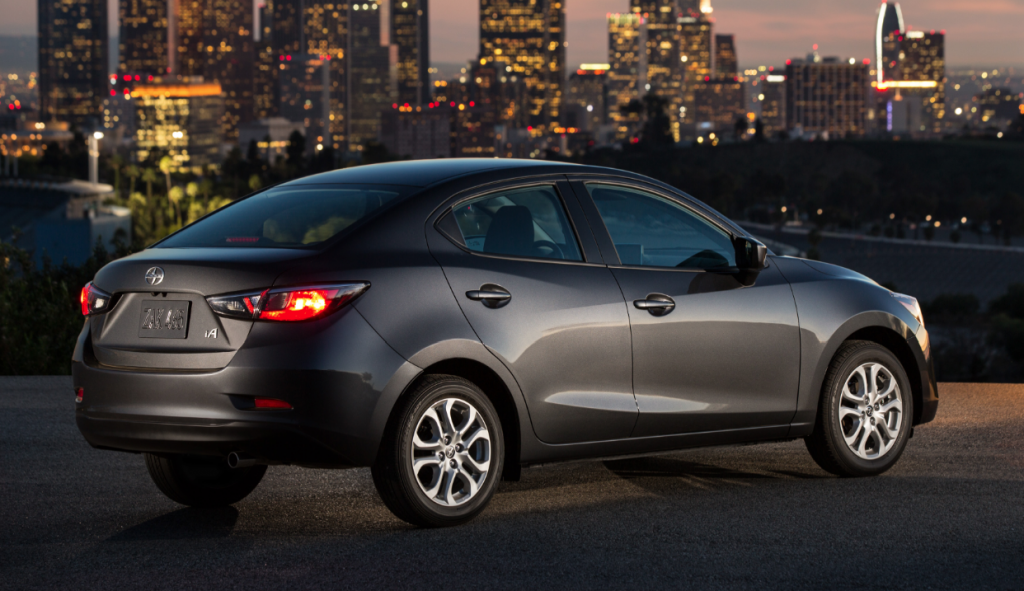 The iA is one of the few sedans in the subcompact class, and its calling cards are a high level of equipment — all of it standard — great fuel economy, fine ride and handling balance, and decent room for four adults.

While it might logically seem that subcompacts would be rather cramped inside, that’s not the case anymore – and is certainly not the case here. Really tall folks might want for space, but even 6-footers can ride in tandem without feeling like sardines. However, four adults is the practical maximum, as three across in back is feasible only for kids.

While the iA is hardly a sporting machine from a dynamic standpoint, it’s certainly capable enough. The suspension and tires soak up smaller bumps quite well, though larger ones (and there weren’t any that would qualify as “potholes” on our California preview route) were more noticed. Even with their suspensions set to “compliant,” small, light cars such as this can still feel quite nimble and tossable in the twisties (which we found aplenty), and the iA proved the rule by carving through corners with assurance and stability if not record-setting speed.

Even for the subcompact class, 106 horsepower isn’t a lot, but it gets the job done. With the automatic transmission, the iA can easily keep up with traffic, though flooring the throttle from a stop doesn’t seem to encourage much more urgency than a quarter-throttle stab, with what might be called “power” not arriving until about 20 feet out. On the positive side, the transmission kicks down quickly for decent around-town passing response, though the car seems to run out of breath at about 60 mph. We only drove a manual-transmission version briefly, but found the clutch and shifter to be very smooth in operation.

As mentioned earlier, the iA comes with a forward-collision warning and mitigation system – a novel and appreciated feature at this price level – but it’s kind of the “light” version. According to Scion, it only works below 18 mph, and though it’s capable of braking the car if you fail to, it might not bring it to a complete stop before impact. (As such, we were encouraged NOT to try this feature.) However, today’s cars have bumpers that are supposed to be able to absorb small impacts without damage, so a slight “tap” might not be any big deal – and is far preferable in any case to a higher-speed “slam.”

Hatchbacks dominate the ranks in the subcompact class. As such, the iA really has few direct competitors for those preferring a sedan, and it’s the first of its type in the Scion lineup. In other classes, sedans tend to be more popular, so maybe this is a change whose time has come. If that’s the case, Scion dealers may well be seeing some new faces in their showrooms.