On the eve of the 2016 North American International Auto Show in Detroit, Mercedes-Benz introduced the redesigned version of its popular E-Class sedan. Mercedes was light on technical specifics, but shared details of the new car’s autonomous capabilities.

When equipped with an available Drive Pilot system, the 2017 E-Class will provide hands-free cruising—even without clearly marked road lanes, Mercedes claims. The system, which works at speeds up to 80 mph, will also change lanes autonomously. 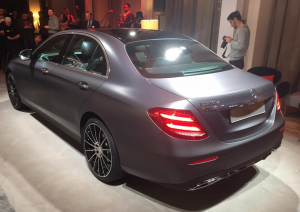 Up front, the new E-Class boasts a new headlight array composed of 84 individual LEDs. The sleeker profile cuts through the air a little more efficiently than before, with the new sedan boasting a drag coefficient of just 0.23.

A new E350e plug-in hybrid model will provide a claimed 20 miles of pure-electric driving. Mercedes did not run down the entire E-Class model lineup, but we do know a diesel-engine E220d will be offered, and we expect the base gasoline-six-cylinder E350 to return. The 2017 Mercedes-Benz E-Class lineup is slated to go on sale this summer.

While we bemoan the fact that new vehicle introductions are focusing more and more on autonomous driving than on driving dynamics, it’s good to see that Mercedes-Benz is prepared to battle on that front as well.

Mercedes sold slightly fewer than 50,000 E-Classes in 2015, a steep decline from the year prior. With appealing new styling and a host of new technological features, these midsize Mercedes-Benzes should see a significant sales bump this coming model year.