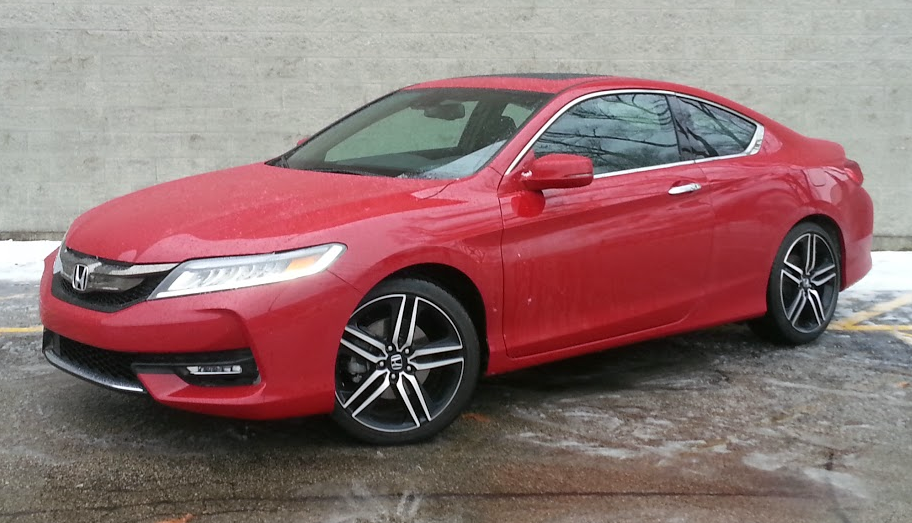 The not so good: Firmer ride and less-useful cabin than Accord sedan

The midsize-sedan field is quite a crowded segment. The midsize-coupe field couldn’t be less so: There’s only one, the Honda Accord.

Honda brings refreshed appearance and new technology features to both Accord body styles for 2016. The two types match up fairly well, with the same Touring, EX-L V6, EX-L, and EX series. Only at the bottom end is there some difference, with the coupe coming as an LX-S, while the sedan is offered in LX or half-step-higher Sport guise. Consumer Guide® tested a top-end Touring coupe, this within weeks of trying out a ’16 Touring sedan, which drove home their differences and similarities. 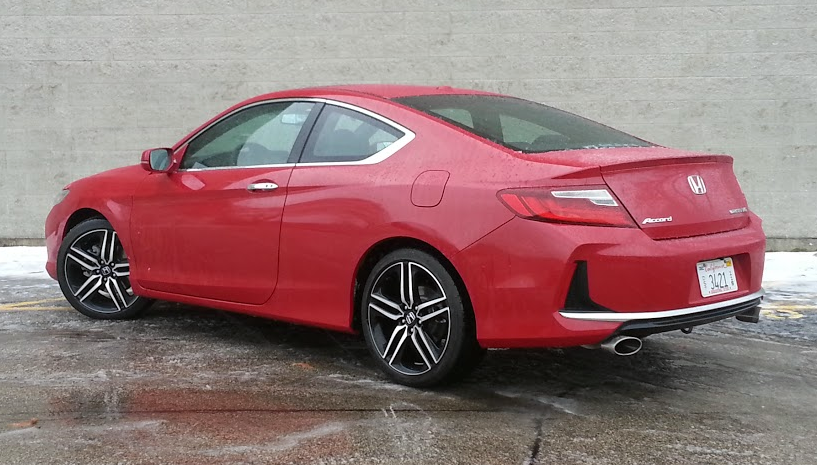 External styling is quite different between the coupe and sedan, even on parts that you might otherwise expect to be shared, like the hood. Most key dimensions are unique, too. The coupe is two inches shorter in wheelbase, three inches shorter overall, and 1.2 inches lower. (Wheel-track widths are the same, however.) These differences translate into additional cabin volume, trunk space, and weight for the sedan—an additional 51 pounds at the Touring level. 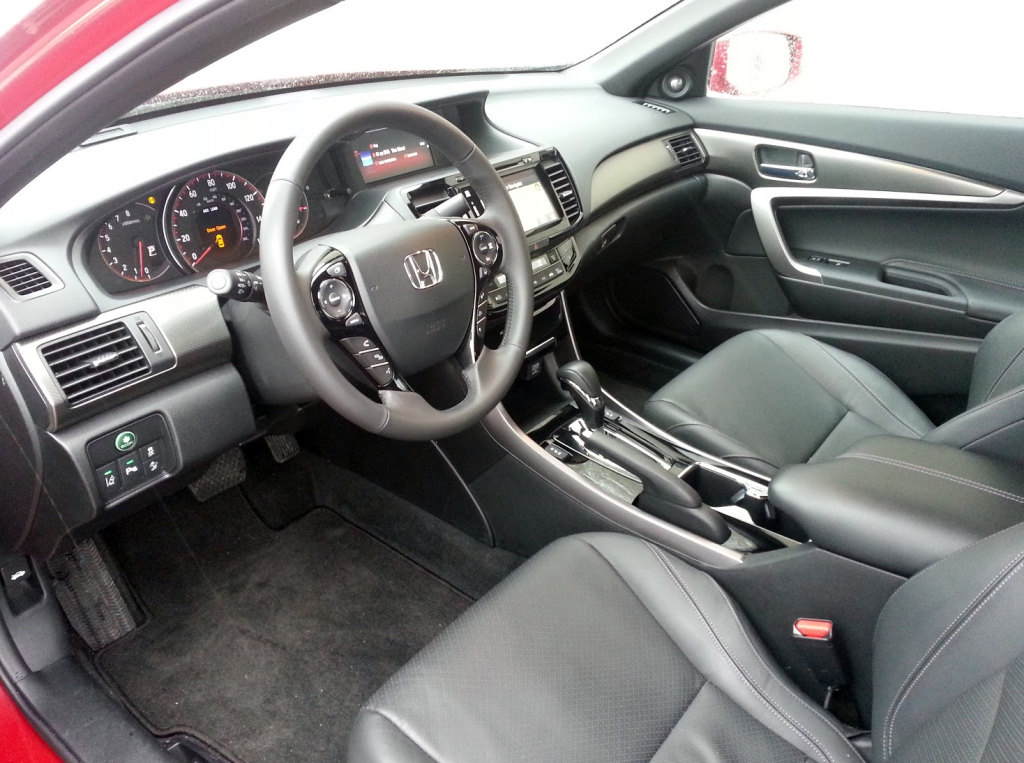 Up front, the Accord Coupe looks and feels much like the popular sedan. The Coupe’s rakish roofline cuts into rear-seat headroom, however, and legroom is tighter as well.

Once inside and behind the wheel, you’d be hard-pressed to tell which is which, as they present the same dash and instrument array, front seats, and center console. Like most Accords, Touring models have the smartphone-enabled HondaLink system for accessing things like personal music and podcasts, with touch, pinch, or swipe control on a 7-inch display screen. (This driver finds it easier to do things like change radio stations or alter volume via the steering-wheel thumb buttons than to go through the screen.) Also included are Apple CarPlay or Android Auto connectivity, satellite radio, and HD radio.

Also, any Touring packs a 3.5-liter V6 that develops 278 horsepower and 252 lb-ft of torque, and a 6-speed automatic transmission with a “Sport” setting and steering-column paddle shifters for more spirited driving. Except when the “Econ” mode is activated to conserve fuel, this smooth powerplant delivers lively acceleration. Curiously, though, the coupe has a lower EPA highway mileage rating than the sedan—32 mpg vs. 34—even though they have the same 3.94:1 final-drive ratio and the 2-door car is marginally lighter. In this driver’s hands, the coupe returned 22.6 mpg in a stint of 164.6 miles, 52 percent of that in city driving—not quite up to the EPA combined-mileage estimate of 25 mpg but fractionally better than he saw when wheeling the Touring sedan.

Perhaps the shorter 107.3-inch wheelbase played a part but ride in the coupe didn’t seem as pleasant as often as it did in the sedan. Road cracks registered with a bit of a jolt from the rear end. There were no complaints with the two-door’s maneuverability and handling, however.

If you’re looking to drive something a little less common, you should know that the Accord sedan outsells the coupe by a 10-to-1 ratio.

Even with the lower top and standard moonroof, front-seat occupants won’t feel crowded for head room in the coupe. However, rear-seat denizens won’t be as lucky. This 5’10½ ” tester just fit under the canopy. Just about any adult (two is the limit in the back seat) who can fit beneath the roof should find tolerable leg room. Rear-seat entry and exit isn’t taxing, and rear side windows are large enough to keep passengers from feeling claustrophobic while affording the driver pretty good over-the-shoulder visibility. Unfortunately, rear seats aren’t heated, as they are in the Touring 4-door sedan.

Where the sedan has a 60/40 split-folding rear seat, the back rest in the coupe folds as one. Still, as in the sedan, the retracted seat rests a few inches above the height of the trunk floor. Personal-item storage slips below average in the coupe because rear passengers don’t have the sedan’s central arm rest with built-in cup holders. Small pockets are molded into the rear side panels. Meanwhile, trunk space isn’t bad given the overall size of the car, though as in all Accords the floor narrows considerably between the wheel houses.

The Accord Touring coupe starts at $34,225. That’s just $355 less than the base price of the sedan that CG sampled. While it’s admirable that Honda offers shoppers a choice of body styles—an extremely rare event these days—for its ride, room, and a few extra amenities, the sedan looks like the better deal.