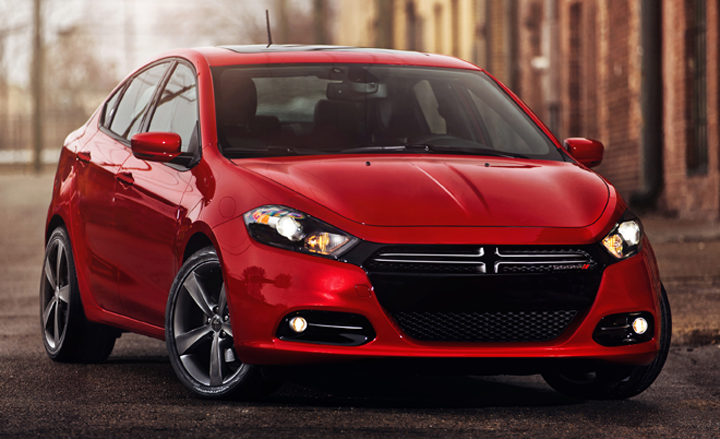 “Oh my gosh—a Dodge Dart!” said the driver who pulled alongside at the light. “That was the first car I drove in the ’70s!”

Although it’s doubtful that the middle-aged lady in the Subaru Forester represents the demographic that Dodge is targeting with the new 2013 Dart, she certainly represents those who would remember the Dart name. Dodge Dart design.

Last sold in the mid-’70s, the original Dart had long been Dodge’s entry-level compact. Though somewhat staid and bland by contemporary standards, it earned a reputation for reliability, economy, and, in certain guises, performance. But the cleverly alliterative name was dropped when the rear-drive car was replaced by a much smaller front-wheel-drive model called . . . the Omni. Yawn.

Today’s reincarnated Dart is a compact front-wheel-drive sedan intended to put Dodge on the shopping list of buyers who are also considering such class stalwarts as the Honda Civic, Toyota Corolla, Chevrolet Cruze, and Ford Focus. Due to go on sale in June, it replaces the Caliber 4-door hatchback, which began dropping off most buyers’ radar within months of its release as a 2007 model.

It’s difficult to make a compact car stand out among the many established models in the already-crowded class. One way Dodge is trying to do it is with size. The Dart’s 106.4-inch wheelbase is the longest in the class (though just barely), and at 183.9 inches stem to stern, it’s tied for the greatest overall length. That size partially accounts for a 3,186-pound curb weight, which likewise is high for the class. So Dart is big for a compact.

“Personalization” is a currently popular trend, and the Dart stands out in this regard as well. Dodge is offering the car in five models—some with distinct grille and taillight designs—along with 12 exterior colors, 14 interior trim combinations, and six wheel styles.

The available feature list is something else that sets the Dart apart, with many being either rare or exclusive to the class. On the safety front, rear-side airbags are standard, with a rearview camera, rear-obstacle detection, blind-spot detection, and cross-path detection also being available. Along with the currently popular suite of multimedia features and navigation system, unusual luxury items offered include a large 8.4-inch dashboard touchscreen, a heated steering wheel, keyless entry and starting, remote start, and a clever cargo bin under the front passenger-seat cushion.

Mechanical aspects of the Dart are a little less innovative. The base engine is a 160-horsepower 2.0-liter 4-cylinder, the same specs as the powerplant found in the Ford Focus. It can be mated to either a 6-speed manual transmission (which is offered in a broader range of models than in many compact cars) or a 6-speed automatic. Optional is a turbocharged 1.4-liter 4-cylinder that is also rated at 160 horsepower, but with a bit more torque than the 2.0. The Chevy Cruze offers a similar engine, though it puts out only 138 horsepower. In both cars, the “turbo” is not so much a performance engine as an economy engine, though you have to pay extra to get that “economy”—which in some ways defeats the purpose.

Due in the fall is a sportier version of the Dart called the R/T. It will feature a 184-horsepower 2.4-liter 4-cylinder engine and performance-tuned suspension, both of which would likely be more effective if the Dart didn’t weigh nearly 600 pounds more than a Honda Civic. Also due later is an Eco model powered by the 1.4-liter turbo and incorporating aerodynamic tweaks and other fuel-saving measures.

So far, the EPA has tested only two of the Dart’s powertrain combinations: the 2.0-liter with manual transmission and the 1.4 turbo with manual. The former netted a 25 city/36 highway mpg rating, the latter a 27/39. Both are good for the class, but hardly standouts.

Base prices of four of the models have been released, but not option prices. The base manual-transmission SE starts at $15,995 not including destination, but that’s for a car without air conditioning or power locks. Adding those two features and others is the $17,995 SXT, which is probably the model most buyers will want. Add in automatic transmission and destination, and the total should be under $20,000. The Rallye, priced at $18,995, gets you cruise control and some sporty touches. Topping the current line is the $19,995 Limited. Not only does it have numerous added features, but it can be optioned with any of the safety and luxury items noted above.

Although the new Dart really doesn’t offer anything outside the compact-car norm in terms of interior room, cargo space, or dynamic capabilities, it is at least competitive in those areas. But with all the features and personalization options it boasts, it’s clear that Dodge aims to lure buyers with a car that boasts high-tech features, personalization, and style—something that really couldn’t be said about the original.