In 2009, a banner driving year that included a chance to slip behind the wheel of a Ferrari F430 and a Rolls-Royce Phantom Drophead Coupé, I decided it would only be fair to balance those automotive extravagances with a test drive of the worst car I could possibly imagine. Nothing built in my lifetime fits that description better than that antithesis of proud German engineering, the Trabant.

Most Westerners got their first long look at the Trabant after the fall of the Berlin Wall in 1989 opened up the once-off-limits nation of East Ger­many. The car’s cartoonish appearance and stone-age engineering made it the butt of numerous jokes, quickly rivaling the vast store of those told at the expense of Lucas in England. I was expecting something seriously bad, and in that regard at least, the “Trabi” didn’t disappoint.

By the way, I can make this judgment thanks to Jo Weber, who owns the Oldie Garage near Anzing, Germany, about 20 miles east of Munich. His collection of more than 50 vintage European, British, Japanese, and American cars is housed in a spotless building in the remote countryside, and he rents them out for as long as you want: by the hour, by the week, or—perhaps in the case of the Trabant—by the block.

Weber had already moved his brown-over-cream 1962 Trabant 600 into an open-sided shed (it would soon become apparent why), along with what he said was the only 1975 Trabant 601 convertible ever built and a Citroën 2CV “Ugly Duckling” made available for comparison purposes. From a distance, the Trabi 600 looked quaint, sort of like a grilleless caricature of a 1958 Rambler American. However, closer scrutiny revealed the patchy assembly quality of a kit car and an interior that boasted all the ambiance of a late-’60s golf cart.

Weber lovingly patted “Mandy’s” roof (he claims she’s an unrestored original) and climbed in. He pulled out the choke lever and turned the key, and, after some labored cranking, the little engine sputtered to life. At its 2000-rpm “warm-up” idle, the air-cooled two-stroke sounded like a chainsaw powering through oak. The shed began filling with smoke.

We swapped places, and the first thing I noticed was that the pedals were far offset toward the center of the car due to intrusion of the wheel well. This left me sitting on the wafer-thin seat with my torso twisted right, like a freeze-frame of Elvis singing “Jailhouse Rock.” While the engine was doing its best to single-handedly double the rate of global warming, Weber ran me through the shift sequence. This took more study than one might expect. 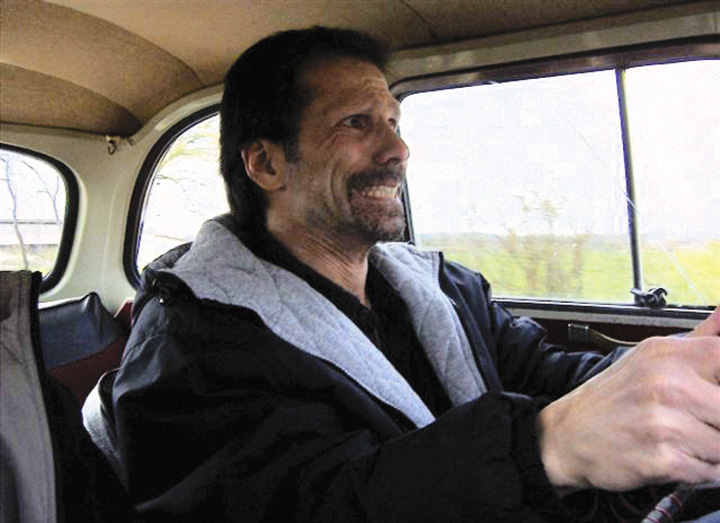 Rick grins and bears it as he attempts to master the on-road quirks of the “Trabi.”

The gearshift lever sticks straight out of the dash, curving right 90 degrees at its end to host a long, thin, black-plastic handle. From neutral, you push the lever all the way in toward the dash and rotate it down for reverse—easy enough. But first is trickier. After rotating the lever back to neutral—identified more by visual position than by any detent—you pull the lever toward you while applying slight downward pressure until the lever finds the gate for first—also devoid of a detent—
and the car drops into gear with a clunk. Then it’s up for second (another clunk), back to neutral, out, down for third (clunk again), and up for fourth (ditto). Aside from the lack of detents, the motions just seem strange, though I’m sure the whole procedure becomes second nature after a decade or two. I dutifully drew a diagram of it on a piece of paper to use for future reference.

After hearing a brief explanation of some of the Trabant’s other idiosyncrasies—and there are many—along with a warning that “the brakes are not so good” (a famous failing of all Trabants), I finagled my way into first gear and set off down the driveway with my quickly scribbled notes and no small amount of trepidation.

I learned right off that Trabants don’t like potholes. And this wasn’t even a real Chicago pothole; more like a small dimple in the driveway dirt. But it caused a jolt that seemed entirely out of proportion to its depth. At barely a crawl, the little engine was already pleading for second gear, which—at least when not rushed—engaged with surprising smoothness, as did the clutch.

At the end of the gravel driveway was a paved street that led to a two-lane highway. The planned route was a 10-mile circuit that included a detour through a small town. 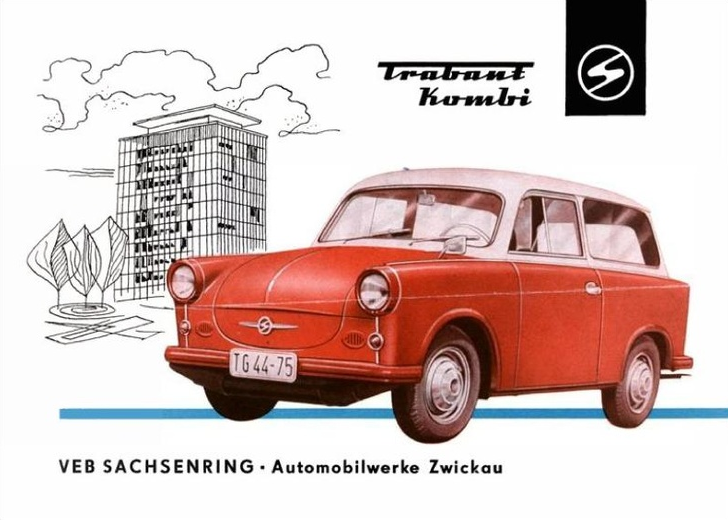 The short trip to the main road verified what the 20-bhp rating promised—the throttle seemingly regulating noise and smoke more than speed—so I waited for a long hole in passing traffic before pulling out. Finally an opportunity arose—there was no oncoming car in sight—and I coaxed the Trabant onto the highway.

A couple of things became immediately apparent. Even for someone who has owned some seriously slow cars in his day (including a 40-bhp VW microbus, a Mercedes-Benz 190 diesel, and a full-size Chevy with three dead cylinders and a dragging brake), accelerating up to anything resembling “speed” takes a lot of patience. It also takes a lot of effort—from both driver and Trabant—as the lack of power and cumbersome shift linkage combine for labored progress. To say this relic of the erstwhile German Democratic Republic is “slow as molasses” would be an undue compliment. Not to put too fine a point on it, but if dropped into the stream of a Chicago commute, a Trabi at full gait would be slow enough to make a turtle honk.

Thankfully, I wasn’t in Chicago. A few studied gear shifts and what seemed like an eternity later, the Trabi had built up a head of steam sufficient to prompt a cacophony from engine, wind, road, and tortured body panels that made it clear why a radio wasn’t among the car’s standard amenities. A quick check of the speedometer showed the needle wavering at an indicated 50 mph, which felt like 120 except that the scenery wasn’t changing. (Weber later claimed that he’d had it up to 60, in which case I admire his bravado if not his wisdom.) And then I saw my turn.

With Weber’s warning still fresh in my ears, I applied the brakes with authority. At first I thought I’d hit the clutch by mistake—the odd pedal arrangement popping to mind—but a quick glance revealed that my foot was indeed on the center pedal. I concluded that Mr. Weber was an optimist.

After negotiating the corner with white knuckles and wide eyes, it became apparent that what the Trabant lacked in braking it made up for in handling, as the Conestoga-era suspension redeemed itself by allowing little body lean while the Frisbee-sized tires provided surprising grip. Yet as I motored into town with an elevated heart rate and a sigh of relief, I was only partly aware of the challenge that lay ahead. It was expected that finding the proper gears at the inevitable stop signs was clearly not going to be a reflex reaction, but it all had to be done while avoiding gawking citizens—Trabants are evidently not a common, nor particularly welcome, sight in the former West Germany—and reading indecipherable street signs at the same time. (German streets tend to carry names like “Achduliebegartenzukonenwaltstraße,” which don’t lend themselves to quick interpretation by foreigners with a high school-level knowledge of the language.) But aside from blanketing my route with a thin film of petroleum byproducts, I left the quaint village no worse for my intrusion. I relaxed my death grip on the thin-rimmed steering wheel as I saw the open road ahead, which would return me to my point of departure.

Seemingly most content while motoring through the scenic countryside at 35 mph, the Trabi’s calling suddenly became clear. It was the vessel that allowed a somber citizenry momentary escape, and I envisioned an East German family en route to Grandma’s house merrily engaged in a rousing chorus of “Edelweiss” while visions of lard-soaked schnitzel danced in their heads. And then I came upon another one of those dag-blasted stop signs.

As I pulled into the safe haven of Weber’s garage, two thoughts crossed my mind: first, that people actually saved for years and waited a decade to put themselves where I now sat, and second, that I had, indeed, driven the worst automotive monstrosity known to the modern world. Next time duty calls me to some rich man’s plaything, I’ll feel as though I’ve paid my dues. Driving a Trabant.