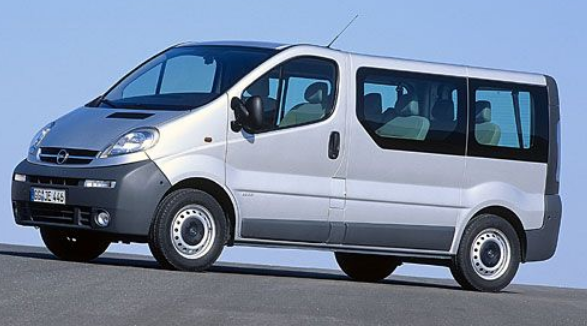 Tom quickly realized that the underpowered Opel Vivaro was not up to the task of hauling six passengers and luggage.

Allow me to brag a little: I am master of the 11-point turn. Sure, most of us learned three-point turns in drivers ed, but how many of us, I wonder, have experienced the sheer joy of reversing the course of a too-long vehicle on a far-too-narrow road? I have, and it’s entirely my father’s fault. You see, my father is the worst navigator in the world.

Now, at any given time, asking my father for directions is a mistake. This is because my father is incapable of simply sharing with you the simplest route anywhere. My father is a font of alternative routes, time-of-day time-saver shortcuts, and unnecessary backup plans. He is, however, incapable of providing a simple, straightforward route in less than 20 minutes. In fact, his directions for getting from the front of his house to his mailbox just 120 feet away include a late-day mosquito-avoidance bypass, a weather contingency plan, and two changes of footwear.

Now, a recipe for certain disaster might include traveling to a foreign country, parking my father in the passenger seat of a rented mini bus, equipping him with a largely useless map, and heading off with a load of passengers, distant destinations, and a very tight schedule. This is exactly what my family did.

A few years back, my parents decided it was time to visit the towns in Serbia in which they had grown up. With them went my wife, my kid, my mom’s mom, and me. After visiting with family in Munich for a couple of days, we caught a plane for the Serbian capitol Belgrade. This is where the fun began.

Belgrade is a beautiful city. It’s also a city that has seen its fair share of war and strife. So, for tactical reasons related to defense and security, the streets of downtown Belgrade ARE NOT MARKED. I kid you not, there are no street signs in downtown Belgrade. What downtown Belgrade has plenty of are narrow one-way streets and lots of dead-ends.

Now, when the rental car agent—whose English was excellent—began explaining that the streets of Belgrade could be difficult to navigate, I became aware that my father wasn’t really paying attention. This not-paying-attention thing would repeat itself many, many times over the next two days.

Now, my dad loves to talk. He’ll talk to anyone at anytime about anything. In fact, he was talking to my wife and kid when he should have been learning about the intricacies of driving around Belgrade. But, when Dad took the rather cartoonish map of Belgrade that is meant to aid folks looking for streets with no names, I assumed he was fully embracing the role of navigator. I was wrong.

Our hotel was located somewhere in the center of downtown Belgrade and, on the map at least, looked easy enough to find. The trick to any foreigner finding anything in Belgrade is to count off streets as you pass them. Our hotel was, roughly, 15 streets in and maybe eight streets to the right—something like that. I confirmed with my dad: “You’re counting streets, right? Because I have my hands full here.” My father nodded in assent but failed to look forward, which I took as an ominous sign. Actually, my father sat sideways in the front passenger seat for the entirety of his time in the vehicle—sideways, so that he could chat with everyone in back. 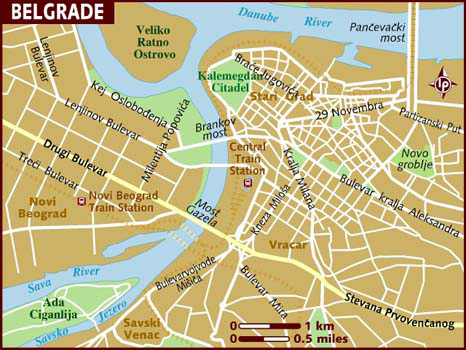 Considering that the streets of downtown Belgrade are unmarked, a map is of little help.

And, when I mentioned that my hands were full, I meant that I had one hand on the wheel and one hand on the stubby shifter of a 2008 Opel Vivaro. The Vivaro, for folks not familiar with European minibuses, is about as long as an American minivan but is wider and higher—and seemingly three tons heavier. I say seemingly because the 2.0-diesel engine under the hood of our rental van was not up to the task of keeping up with traffic while laden with six passengers and luggage.

Predictably, my father never faced forward, and thus was never able to begin counting streets. As a result, our roughly 12-mile drive from Nikola Tesla Airport to our hotel took about three hours. Three hours that included heavy urban traffic, absurd battles for position on narrow streets, and at least three howling outbursts by me laced with colorful and well-placed expletives.

One particular outburst of mine, which still resonates through my lesser nightmares, was, “Damn it, Dad! There is no ‘Welcome Appels’ sign; you need to actually use the map and count the streets.”

By the time dad took enough interest in what was going on, it had grown dark. I really think that he just needed to use the men’s room. It turned out that counting streets, even with your navigator paying attention, is a rough business without light.

After the second time I was forced to back the Vivaro out of a narrow dead-end street teeming with pedestrians, my father came up with what now must be regarded as a brilliant idea. He opened the door, called to the first person he saw, and offered him 20 bucks to guide us to the hotel. The kid got us to our destination. My grandmother, who doesn’t travel well, tucked another $60 into the kid’s shirt pocket. Pretty sure she needed to freshen up as well.

The next day was worse, so much worse.

At the hotel, we met an old family friend who agreed to join us on our mission to find the birthplaces of my parents, the towns of Banatski Brestovac (mom) and Tschestereg (dad). Our friend was going to help us find our way. Predictably, all she really did was distract my father.

My father and I were not on speaking terms at this point, which only encouraged him to converse with the folks in the aft section of the bus. Meanwhile, in the rear-most row, my wife and kid were goofing around and having fun. I wanted to have fun too, but no, I had to drive with a distracted navigator through the post-Soviet wasteland that is rural Serbia.

Turns out, there aren’t a whole lot of roads in Serbia, which is the only reason we actually found both towns that fateful day. The cruel thing about driving around in the country, at least this country, and not the city, is that there is no place, NO PLACE, to turn around if you miss your turn. And miss turns we did. To this day, my wife, daughter, and I still employ the phrase “just go past” to indicate any situation that is becoming frustrating.

That day, my father told me to “just go past” at least a dozen times. And each time, he waved his left hand toward to the windshield with a motion that suggested casual indifference to the hell I was about to endure. And by go past, my dad meant past the road we had just missed.

So, you may ask, what’s the big deal? How hard is it to pull into a driveway and just back out? The answer to that might be easier to form were there any driveways.

Rural Serbia is a wasteland of unused farmland dotted occasionally by rusting hulks of structures that stand as testament to the failures of collectivism. And, as there are no houses or stores or buildings of any note, there are no side streets or driveways. Any turning around must be done on the tarmac, as the lane-and-a-half-wide roads are flanked on each side by deep, van-eating ditches.

Complicating the process that I now refer to as the 11-point turn was the steeply peaked crown down the center of all of Serbia’s rural routes. Executing a turn in our wonder bus meant locking the wheel and then building sufficient revs for the torque-less engine to climb the crown of the road while I was still lifting the clutch all while preparing to brake so that I would not roll off the road. Through this process, every step of the way, my father was quick with supportive thoughts including “easy, easy,” “just calm down,” and “that wasn’t so hard.” My favorite, though, was, “See, you can do it.”

I consider not having left my father on the side of some Serbian road a testament to my calm, thoughtful approach to problem solving, and have added it as a line to my resume.

The good news is that we found both of my parents’ hometowns and were back in Belgrade not too late after dark. This time, we found the hotel with relative ease. The next day, my father paid a cabby to drive to the airport slow enough for us to follow. Problem solved. I was done driving in Serbia.