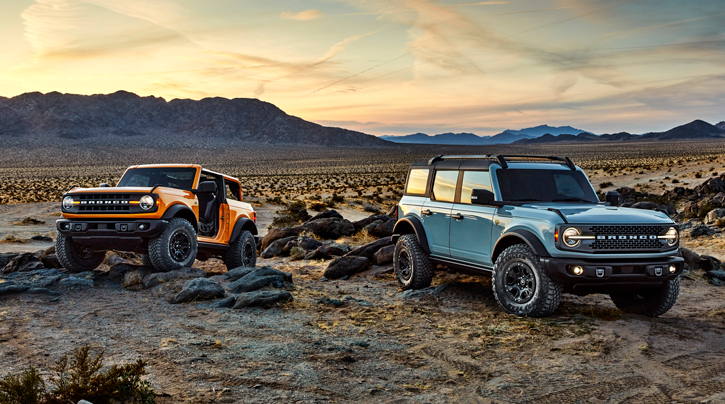 At last, Ford has officially unveiled the long-awaited revival of the Bronco. After more than half a decade’s worth of rumors, teasers, leaked photos, and speculation, Ford’s iconic off-road SUV is reborn as a 2021 model that is aimed squarely at the popular and profitable Jeep Wrangler.

With its boxy body shape, upright windshield, short front and rear overhangs, and retro styling details, the 2021 Bronco takes the bulk of its inspiration from the first-generation Ford Bronco of 1966-‘77. In fact, Ford says that its design studio started with a life-size digital scan of a first-gen Bronco, which directly influenced the proportions and design of the all-new one. 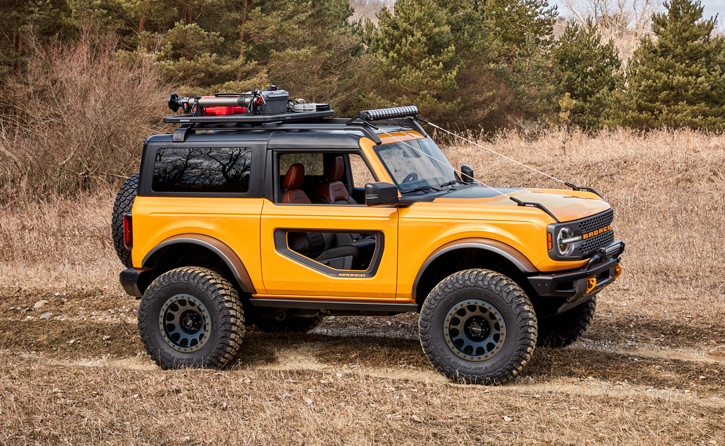 Buyers will have a choice between two of Ford’s familiar EcoBoost turbocharged engines. The standard 2.3-liter 4-cylinder is expected to make 270 horsepower and 310 pound-feet of torque, and the optional 2.7-liter V6 is projected to make 310 hp and 400 lb-ft of torque. The V6 comes with a 10-speed automatic transmission; the 4-cylinder is available with the 10-speed automatic or a 7-speed (6+1) manual gearbox. 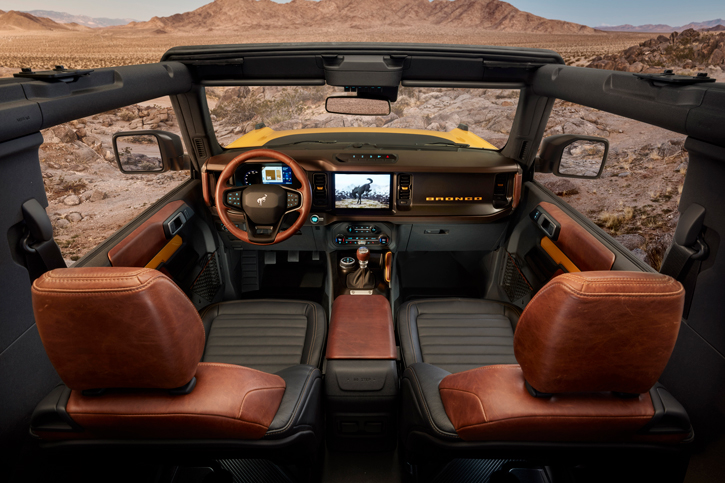 Broncos come exclusively with a 4×4 drivetrain with an independent front suspension and solid rear axle, in base or advanced configurations. The base setup has a two-speed electronic shift-on-the-fly transfer case, while advanced setup gets a two-speed electromechanical transfer case with heavy-duty Dana rear axle and independent front differential unit. The advanced 4×4 system is also available with front and rear electronic locking differentials. To protect those drivetrain components, the chassis is equipped with steel shields and can be outfitted with skid plates, bash plates, and side rock rails.

Depending on model, the Bronco’s ground clearance ranges from a little over 8 inches to 11.6 inches, which Ford says is best-in-class. Maximum breakover and departure angles are 29 degrees and 37.2 degrees, respectively, and Ford says the Bronco has 17 percent more suspension travel than the closest competitor (when properly equipped), and is capable of fording water up to 33.5 inches deep.

A Terrain Management System includes up to seven driver-selectable G.O.A.T. Modes: Normal, Eco, Sport, Slippery, and Sand, along with Baja, Mud/Ruts, and Rock Crawl for off-road driving. (The G.O.A.T. acronym means “Goes Over Any Terrain,” but any similarities to “Greatest Of All Time” are purely intentional, we’d guess.) 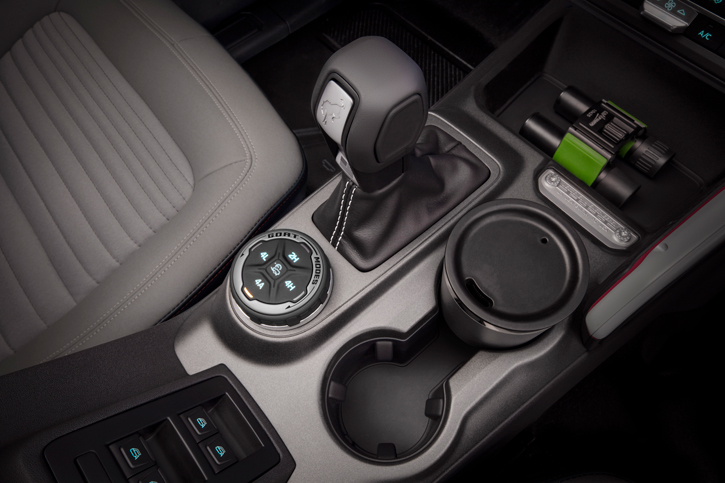 The Bronco is equipped with Ford’s SYNC 4 infotainment system, which features over-the-air software updates and can be equipped with A 360-degree camera system with off-road spotter views. SYNC 4 can also be integrated with the FordPass Performance smartphone app with off-road navigation. The Bronco’s available digital trail mapping system works online or offline, and includes more than 1000 curated trail maps; it allows users to map out and share their off-road treks.

Both two-door and four-door Broncos are designed to be easily converted into open-air runabouts. Two-doors come with a three-section hardtop roof that consists of left and right front sections and a rear section (the first-row roof sections can be stowed on-board once they are removed). Four-doors come standard with a soft top with a tilt-up section to access the rear cargo area, and can also be equipped with a four-section hardtop. All modular hardtops have removable rear quarter windows that can be taken off without removing the roof panels.

Both two-door and four-door Broncos have frameless doors that can be removed; all four of the four-door’s doors can be stowed onboard in protective door bags. Unlike the Jeep Wrangler, the Bronco’s exterior rear-view mirrors are mounted on the cowl, so they remain in place when the front doors are removed. Available interior features include washable rubberized floors with integrated drains, and marine-grade vinyl seating surfaces that Ford says resist mildew. 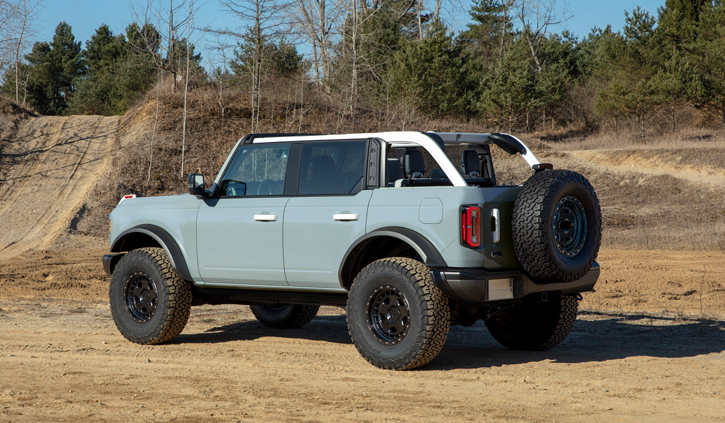 The Bronco is scheduled to go into production at Ford’s Michigan Assembly Plant in Wayne, Michigan in early 2021, with the first models set to begin arriving in Ford dealerships next spring. Ford will provide detailed pricing information closer to launch, but said that the Bronco’s base MSRPs will be $29,995 for the two-door and $34,695 for the four-door, including the $1495 destination charge. The high-end Wildtrak model starts at $50,370 in two-door form and $52,865 in four-door form, destination included. The limited-run First Edition two-doors and four-doors (which are already sold out) are priced at $60,800 and $64,995, respectively. Reservations for both the two-door and four-door Broncos, as well as the smaller Bronco Sport, can be made for $100 at ford.com.

Well, it took long enough to make its official debut, but Ford’s all-new Bronco looks to have the goods to take on the Jeep Wrangler on its own turf, and maybe steal some sales from the Land Rover Defender and Toyota 4Runner TRD models too. The Bronco’s expressive retro looks should appeal to its target audience, and despite the throwback design cues, Ford has endowed the new Bronco with an impressive list of innovative available technology features. The inclusion of an available manual transmission is a pleasant surprise as well. Though the sub-$30K starting price is enticing—and right on par with the Wrangler—the bottom line goes up quickly from there; generously equipped Broncos will stretch well past the $50K mark. It’s a great time to be a serious off-road enthusiast, especially if you’ve got the money to fully deck out one of these rugged, fun-loving rock crawlers.