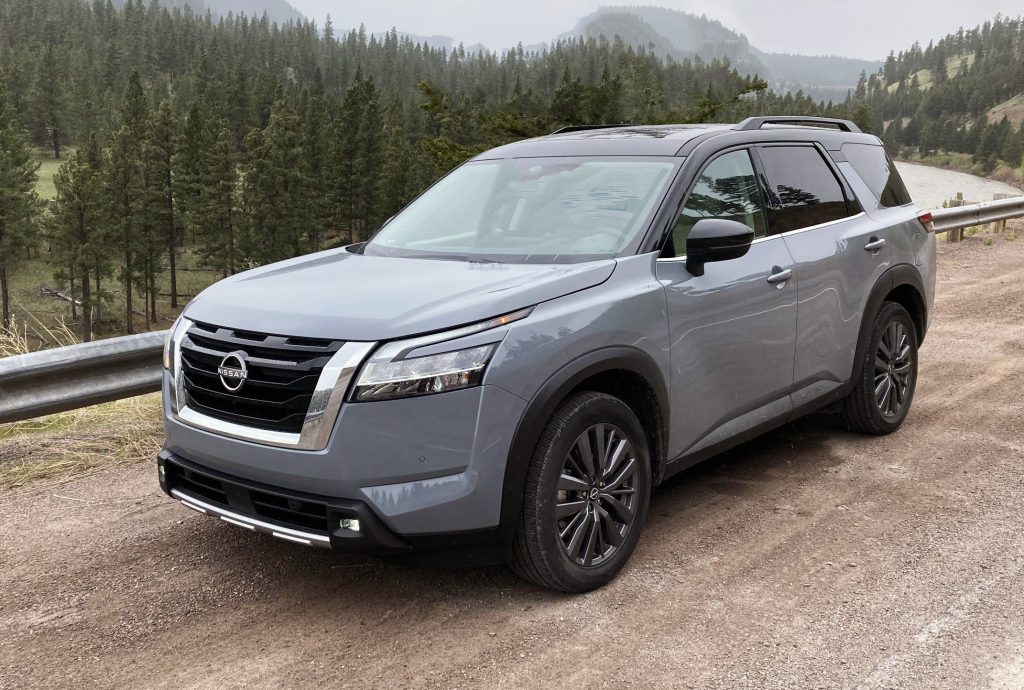 With the redesign of its long-running Pathfinder midsize SUV for 2022, Nissan seems to be trying to have its cake and eat it too. Stylistically, the new Pathfinder gets a sharper-edged, beefier look that recalls the rugged styling of the truck-based, body-on-frame Pathfinders of the 1990s and early 2000s. Underneath, however, is a heavily modified version of the more family-friendly, crossover-style unibody architecture that the Pathfinder has been built upon since 2013. 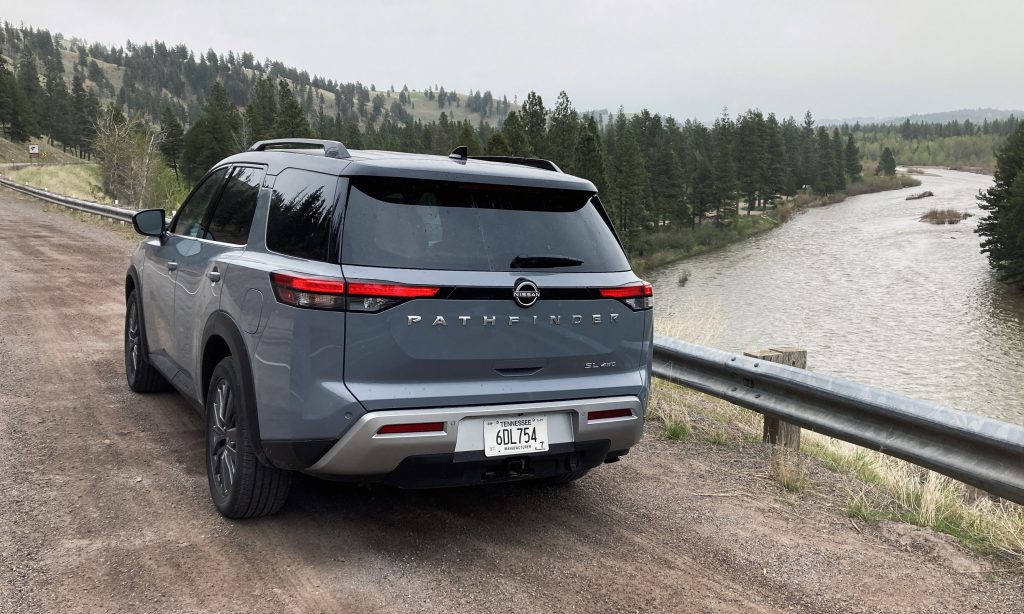 As if to put an exclamation point on the new Pathfinder’s brawnier-looking new visage, Nissan’s promotional photography showcases an example decked out with a collection of dealer-installed accessories that make it look ready for a safari instead of the kids’ soccer game. These add-ons include blacked-out trim, beefy all-terrain tires, and a large basket-style roof rack that also serves as a mount for accessory lights.  We asked a Nissan representative how much it would cost to outfit a Pathfinder to match. The answer was along the lines of “you’ll have to talk to your dealer,” which is as unsatisfying as it is understandable. The tires and roof rack will likely make the Pathfinder noticeably noisier inside while hurting fuel economy, which is probably why they aren’t part of a factory trim level or appearance package. Still, it’s telling that Nissan wants to broadcast the style statement. 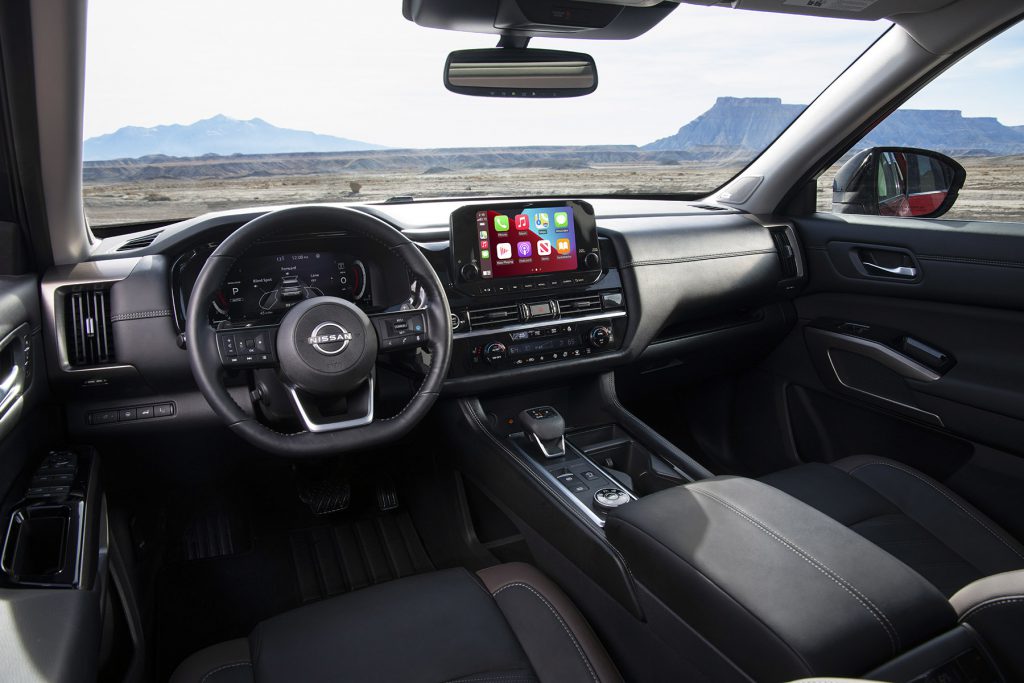 The SL Premium and Platinum models we drove boasted nicely finished cabins, with features such as leather upholstery and a 9-inch infotainment screen with navigation. Controls are nicely laid out, and small-items storage spots abound.

Even without the overlanding-style accessories, the new Pathfinder’s bodywork does indeed look more aggressive, with blockier shapes, matte-finish fender flares, and crisper body lines, but the overall proportions and exterior dimensions are little changed from the previous-generation model. 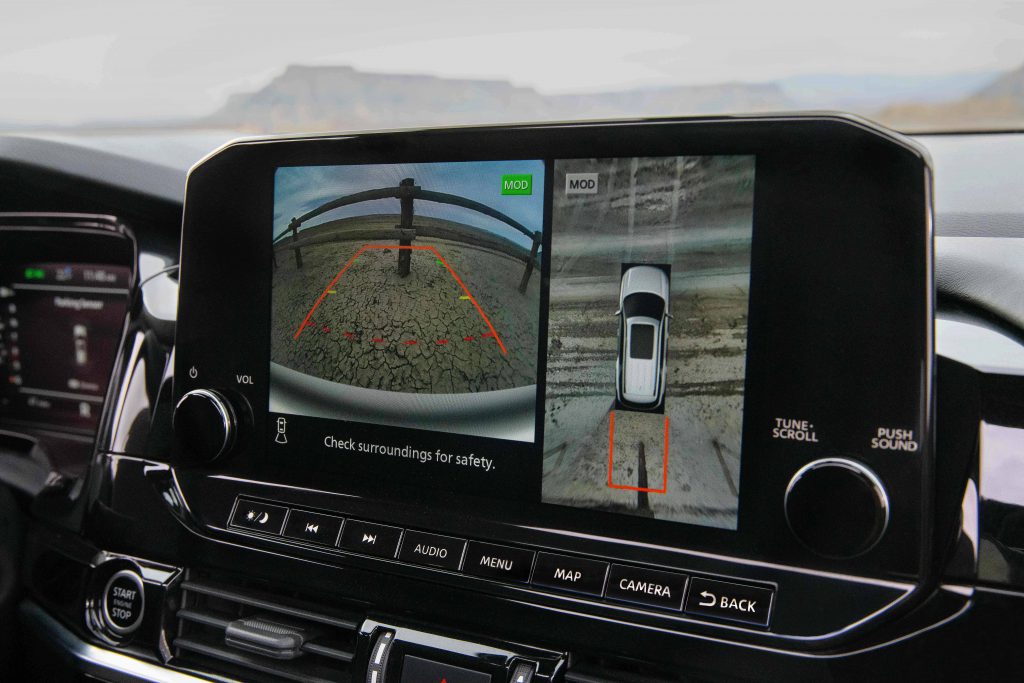 The infotainment touchscreen features clear graphics and is quick to respond to inputs. SL and Platinum models come standard with a helpful 360-degree surround-view monitor. 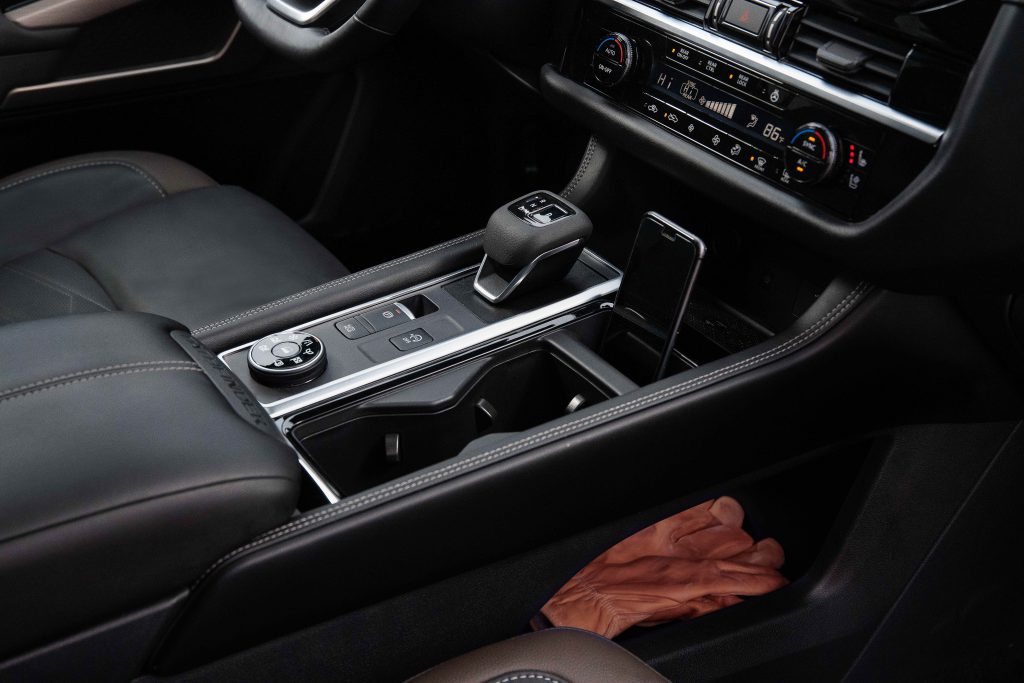 Nissan invited Consumer Guide to preview the 2022 Pathfinder at a press event outside of Missoula, Montana, where we had the opportunity to drive a four-wheel-drive SL Premium and a front-drive Platinum model. With the optional floor mats ($255) and $1150 destination charge, our SL Premium stickered for $45,795. The front-drive Platinum had an optional $795 Lighting Package that added illuminated kick panels and welcome lighting. With the same floor-mat package and destination, the bottom line was $48,390.

The previous-gen Pathfinder’s powertrain paired a 3.5-liter V6 engine with a CVT transmission. For 2022, the Pathfinder’s V6 is essentially unchanged and keeps the same ratings of 284 horsepower and 259 lb-ft of torque, but the CVT has been replaced with a new 9-speed automatic transmission. Front-wheel drive is standard, while all-wheel drive is a $1900 option across the board.

The engine provides good power and is generally unnoticed while it goes about its business. A fuel-saving idle stop-start function is included, but it can be shut off by pressing a button on the console.

We’re impressed with the new 9-speed automatic transmission; it downshifts very quickly when you press on the gas, and the shifts themselves are commendably smooth. The Pathfinder’s console-mounted shifter is an unconventional design that’s shared with the redesigned-for-2021 Nissan Rogue. You push the lever forward to select reverse and pull back to select drive, and press a button on top to engage Park. We found the shifter’s action a bit awkward at first, but after using it a few times it was becoming second nature. Nissan also includes steering-wheel-mounted paddle shifters, but in normal driving the transmission does just fine on its own. Properly equipped, Pathfinder’s maximum tow rating is 6000 pounds. This is unchanged from the previous-gen model, but trailer sway control is now standard. 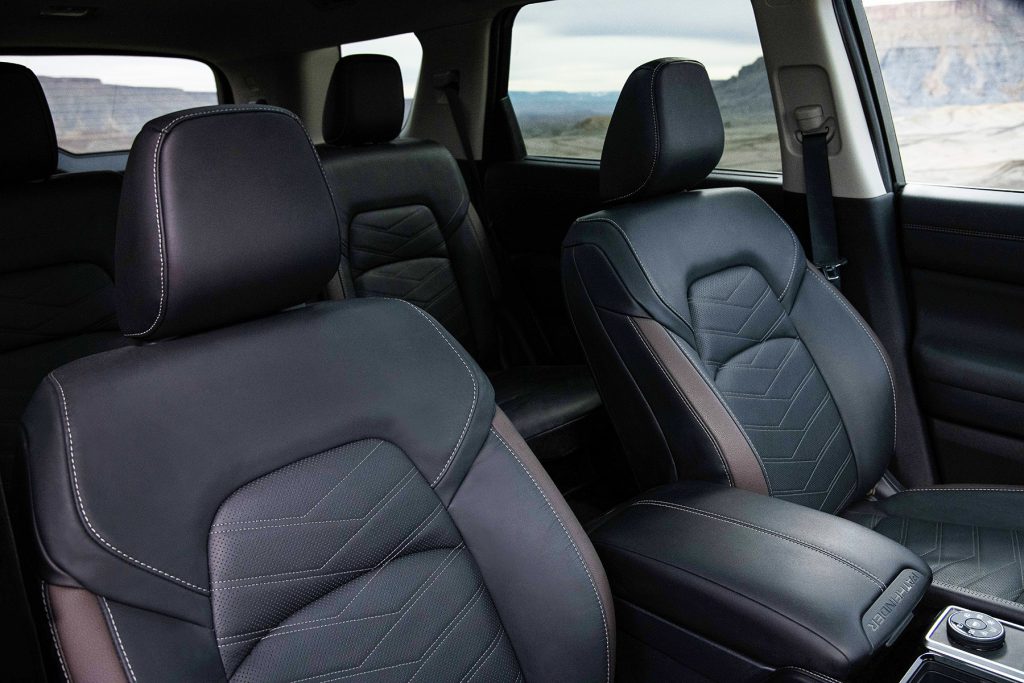 The new Pathfinder’s interior space doesn’t change much from the previous-gen model, which is fine… there’s good room for adults in the first and second rows, and respectable space in the third row as well.

We didn’t have the opportunity to measure gas mileage on our preview drives, but Pathfinder’s EPA-estimated fuel economy is 21 mpg city, 26 highway, and 23 combined for front-drive models. The AWD S, SV, and SL models all have estimates of 21/27/23, while the AWD Platinum is rated at 20/25/22. Most of these numbers are modest improvements compared to the 2020 Pathfinder (Nissan skipped the 2021 model year for the Pathfinder), but the highway number has dropped by one MPG on many models. 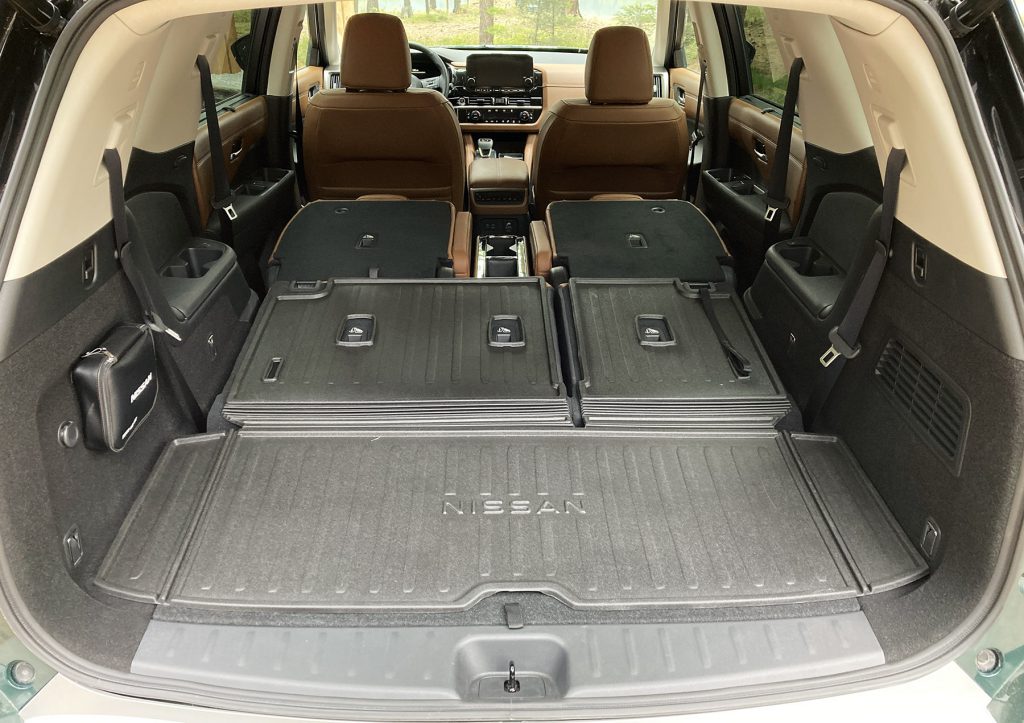 With both the second and third seats folded, the Pathfinder offers 80.5 cubic feet of cargo space–very respectable, but not quite as capacious as some key three-row class rivals.

All-wheel-drive Pathfinders have a new AWD system with a Drive and Terrain Mode Selector. The modes—Standard, Sport, Eco, Snow, Sand, Mud/Rut, and Tow—change parameters such as throttle response, steering feel, the transmission’s shift mapping, and the AWD system’s torque distribution. The AWD system uses a direct coupling that Nissan says will transfer torque to the vehicle’s rear wheels more readily than the setup used in the 2020 Pathfinder, but low-range gearing for serious off-roading is not included. 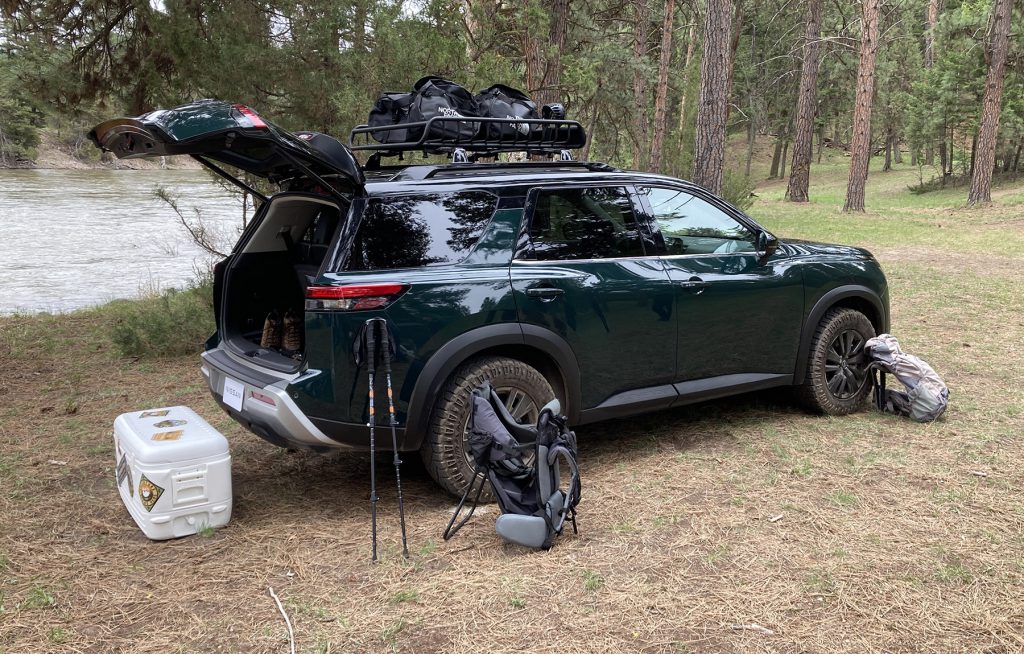 To show off the Pathfinder’s adventure-ready capabilities, Nissan displayed an accessorized model fully outfitted for camping duty at the press-preview event.

To allow us to experience the Pathfinder off-road, Nissan prepared some dusty trails with a few moderately challenging sections. On the standard all-season tires, the AWD SL Premium we drove in Mud/Rut mode proved capable in this environment. The roughest terrain we encountered was a rock-littered downhill slope. Spotters helped us navigate the rocks, and here we found that the standard hill-descent control worked well. The return trip took us up this same hill, again with spotter assistance. Traction was not an issue, and we made it up without drama, appreciative of the V6’s excellent throttle response and the helpful around-view monitor.

The on-road drives took place largely on rural two-lane highways. Pathfinder handles confidently, and the steering is nicely weighted. Ride quality is comfortable overall, but we think the AWD SL Premium felt more settled than the front-drive Platinum, which exhibited some subtle body motion. In both, road and wind noise are well controlled.

Interior appearance is attractive, and thoughtful design details add visual interest. The touchscreen has sharp graphics and responds quickly to inputs, but we’re happy most controls use traditional knobs and buttons. Pathfinders use Nissan’s Zero Gravity seats that are soft yet supportive and comfortable. Your 6’2” tester had ample head room under the panoramic sunroof, and leg/elbow room is generous as well. Outward visibility is generally good.

The rear doors open helpfully wide, making it easier to load kids and car seats and the like. The second row has new “EZ FLEX” seats that lift up and forward at the touch of a button. This feature works easily, with the seat moving far enough forward to open a decent-sized path for access to the third row. And, the seats will still move forward and up as intended when there is a forward-facing car seat installed, which should prove handy for parents. Pathfinders with the second-row bench seat can accommodate three car seats across, and if desired a single car seat can be mounted in the center position. 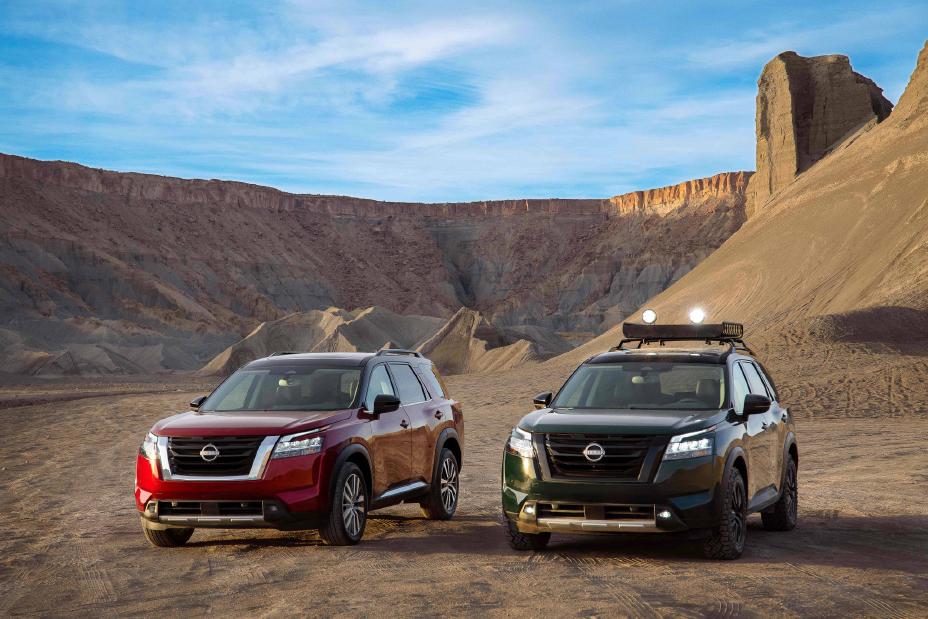 The 2022 Nissan Pathfinder’s beefier looks can be further enhanced by aftermarket, dealer-installed accessories.

Passenger space in the second row is generous. The Pathfinders we drove had the available second-row captain’s chairs, which reduce total seating capacity from 8 to 7 but add the convenience of a console between the seats. The console is easily removable with one hand, and the latch that releases it can be activated while seated in the front seats.

Climbing into the third-row seat wasn’t difficult, and we found good headroom back there. However, legroom was very tight, and the second-row seats sit close to the floor—too close to leave enough room for our size-13 shoes. We’d guess kids and maybe even smaller adults would be comfortable though, and Nissan says the third row will accommodate two car seats. Also, third-row passengers can easily release the EZ FLEX second-row seats to exit by pressing a button on the seat back.

There’s 16.6 cubic feet of cargo room behind the third-row seat—a shade better than the Honda Pilot and Toyota Highlander, but short of the roomier Ford Explorer (18.2 cubic feet) or Volkswagen Atlas (20.6 cubic feet). There is also a generous underfloor storage area that can be divided into separate compartments; its hinged lid stays open its own, and the plastic compartment can hold wet or dirty items like shoes or sports equipment.

The second- and third-row seats easily fold down to increase cargo room to 80.5 cubic feet—one cubic foot more than the outgoing model, but still less space overall than the Pilot (82.1 cu. ft.), Explorer (87.8), Highlander (84.3), or Atlas (96.8). We appreciated that the third-row seats were easy to raise or lower while standing at the rear of the vehicle. The resulting load floor is flat, and Nissan says four-foot-wide sheets of plywood will easily fit inside the cargo area.

Interior small-items storage is quite good. The front console has a nice wide bin under the armrest, as well as two large cupholders and a slot that will hold a cell phone upright. A large cubby bin houses a 12V outlet, USB-A port, USB-C ports, and, if equipped, a wireless charging pad. An open “purse porch” storage area under the front console is accessible from either front seat, and a slim shelf above the glove box is sized to fit the largest iPhone. The second and third rows get their fair share of USB ports and cup/bottle holders as well.

The 2022 Pathfinder’s bolder new looks cover a basic vehicle that mostly sticks to the same course as the previous-gen model, but there’s enough that’s new and improved here to put Nissan’s three-row people hauler on more SUV shoppers’ test-drive lists… whether they plan to barrel down dusty backwoods trails or just pick up groceries and get the kids to baseball practice. 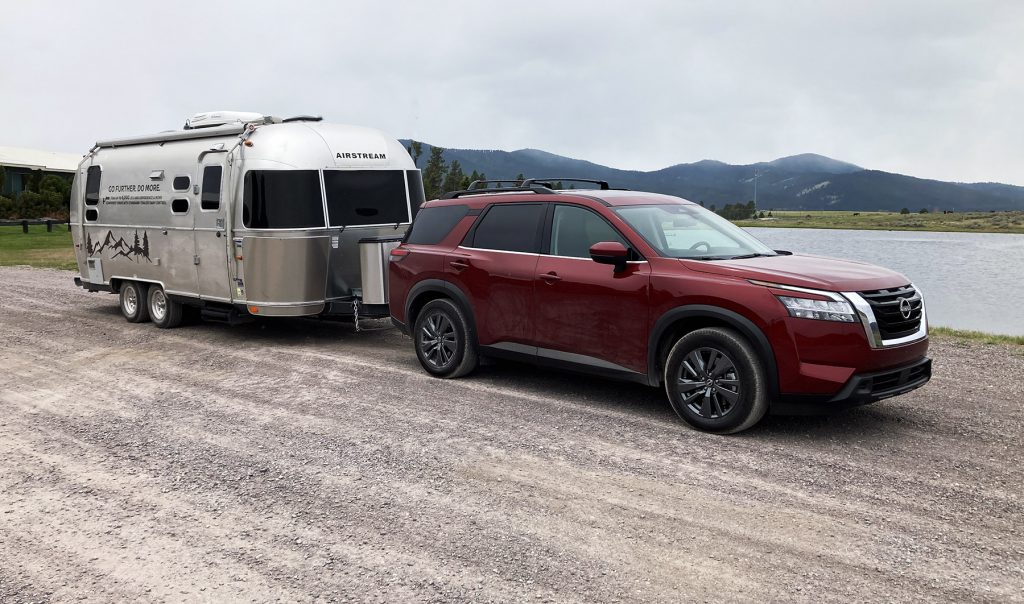 The Pathfinder’s 6000-pound maximum towing capacity comfortably tops most of its class competitors, which typically top out around 5000 pounds. Trailer sway control is a standard feature. 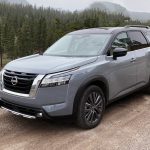 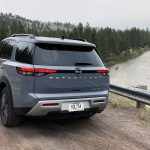 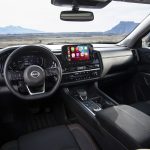 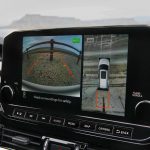 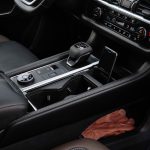 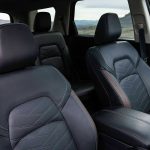 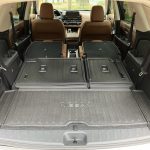 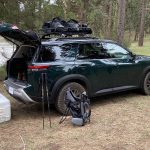 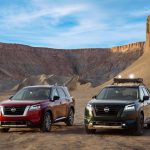 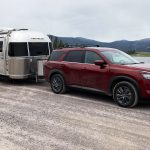