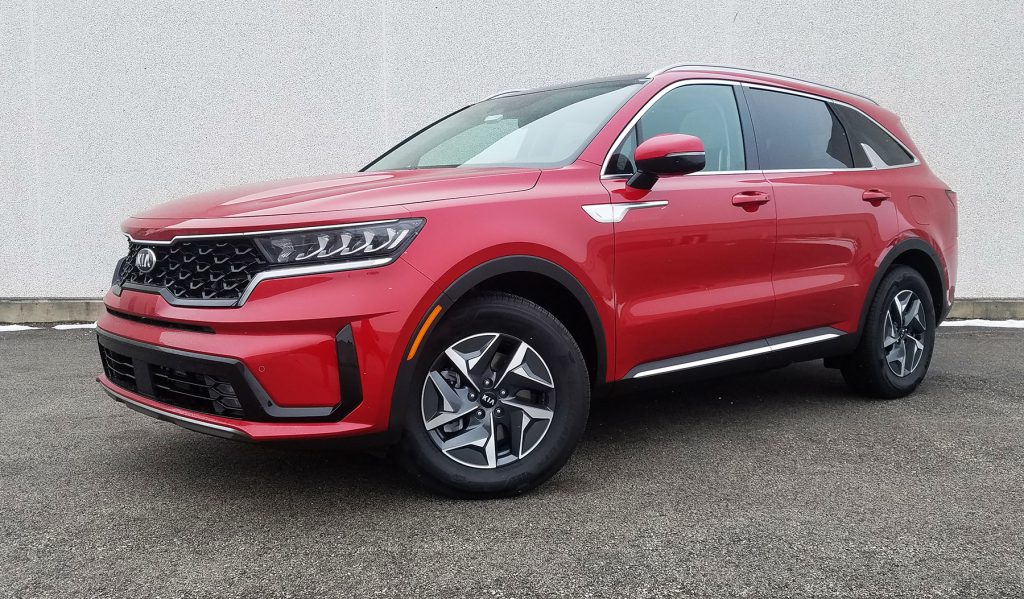 When the outstanding Kia Telluride debuted as a 2020 model, it was an instant hit. This all-new “plus-size” midsize three-row SUV garnered many industry accolades (including a Consumer Guide Best Buy award), and continues to be a top seller for the brand. The Telluride’s success made it easy to forget that Kia already had a strong-selling, albeit smaller, three-row midsize SUV in its model lineup. The Kia Sorento was introduced as a 2003 model, and for 2021 it gets a complete redesign that brings it out of the shadow of the Telluride and back into the spotlight.

The 2021 redesign inaugurates the Sorento’s fourth generation, and brings all-new powertrains, new technology features, and the first-ever gas-electric hybrid models to the Sorento lineup. An all-new “N3” platform, shared with the new-for-2021 Kia K5 midsize sedan, underpins the ‘21 Sorento–Kia says it’s both lighter and stronger than the previous-gen Sorento’s architecture. Overall length stays the same at 189 inches, and width grows less than an inch. A slight wheelbase stretch (1.4 inches, to 110.8 inches total) bumps second-row legroom up 2.3 inches to 41.7 inches, but third-row legroom shrinks about two inches, to 29.6. 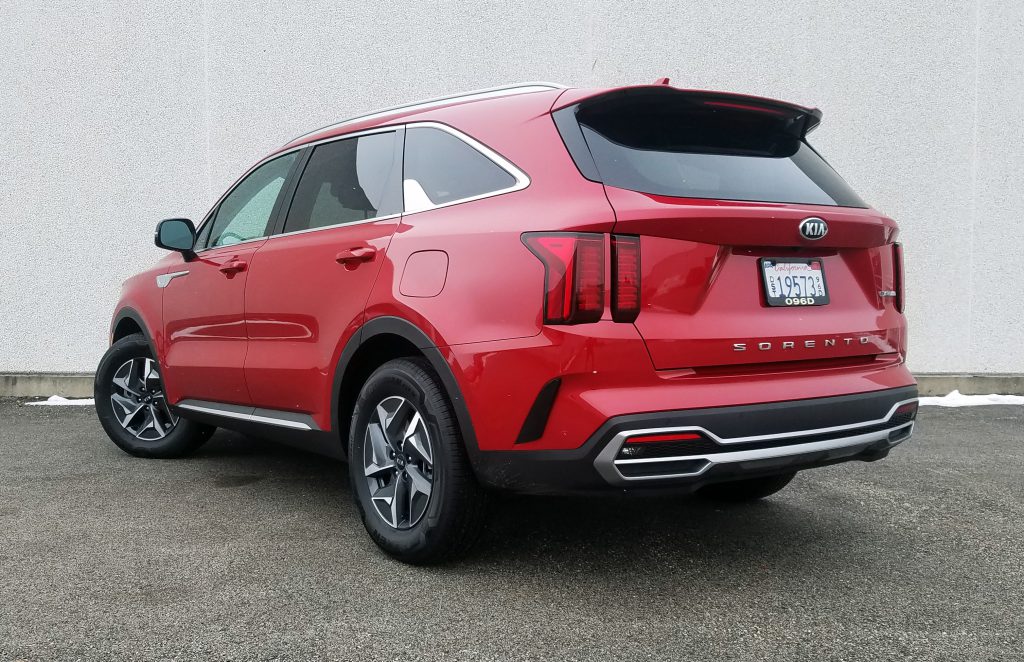 The top trim levels of the 2021 Kia Sorento family are the Hybrid EX (left), the SX Prestige (right), and the SX Prestige X-Line (center). The X-Line gets off-road-focused touches such as a raised ride height and a beefier roof rack.

Save for the two Prestige models, all trim levels are available with front-wheel drive or all-wheel drive (AWD tacks on a $1800 price premium regardless of model). The SX Prestige is front-drive only, while the SX Prestige X-Line comes solely with AWD. The X-Line also gets off-road-focused touches such as a higher ride height (8.2 inches of ground clearance instead of 6.9 inches), a snow mode for its AWD system, distinctive body trim, increased approach and departure angles, and a bridge-type roof-rack system.

The Sorento’s control layout is straightforward and easy to use. Hybrid models get a simple analog charge/eco/power gauge that helps facilitate an efficient driving style. The center console is home to the rotary shift knob, drive-mode selector knob, heated seat switches, and a cubby bin that houses USB ports and a wireless charging pad. Heated and ventilated front seats and a heated steering wheel are standard on SX Prestige models, but not offered on the hybrids.

For now, the Sorento Hybrid comes in just two trim levels—S and EX. Both are powered by a turbocharged 1.6-liter 4-cylinder paired with an electric motor and a 6-speed automatic transmission. Total powertrain output is 227 horsepower, and the EPA fuel-economy ratings are 39 mpg city, 35 highway, 37 combined. The 2021 Sorento Hybrid is available only with front-wheel drive. An AWD version of the hybrid is slated to debut for the 2022 model year, as is a plug-in-hybrid variant that will be powered by a 261-hp turbo 1.6 4-cylinder with a larger battery pack and a more-powerful electric motor. Kia says the Sorento PHEV will offer an estimated all-electric driving range of up to 30 miles. 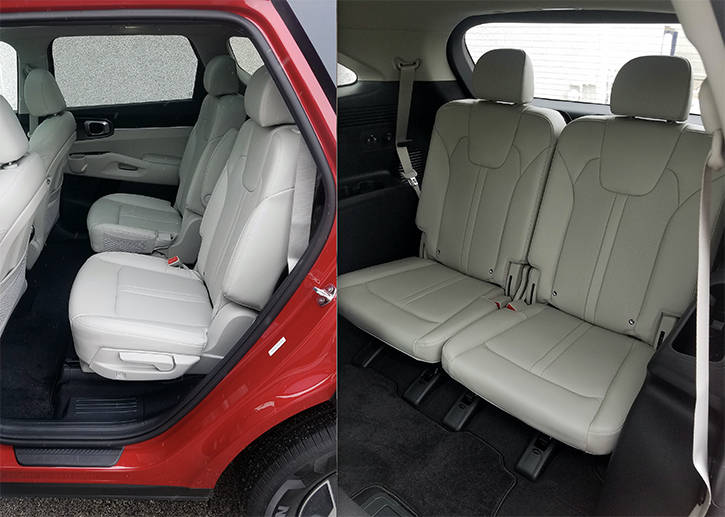 There’s decent room for adults in the Sorento’s second-row seats. The third-row is best suited for children, but it can accommodate larger passengers in a pinch. They’ll ride knees-up, however, since the seat bottoms are low to the floor.

The ’21 Sorento’s newly available safety/driver-assist technologies include Lane Following Assist (which works with the adaptive cruise control system to keep the vehicle centered in its lane), Blind Spot Collision Avoidance Assist + Parallel Exit (which warns of incoming parallel traffic when you’re leaving a parking spot), Rear Occupant Alert (which warns of potentially forgotten passengers or items in the back seat), Safe Exit Assist (which can detect an object approaching from the rear and keep the child safety locks activated until the object passes). Also, the forward collision-warning system gains pedestrian/cyclist detection and junction turning capability, and the adaptive cruise control system now has full stop-and-go capability and the ability to adjust speed in curves based on data from the navigation system. 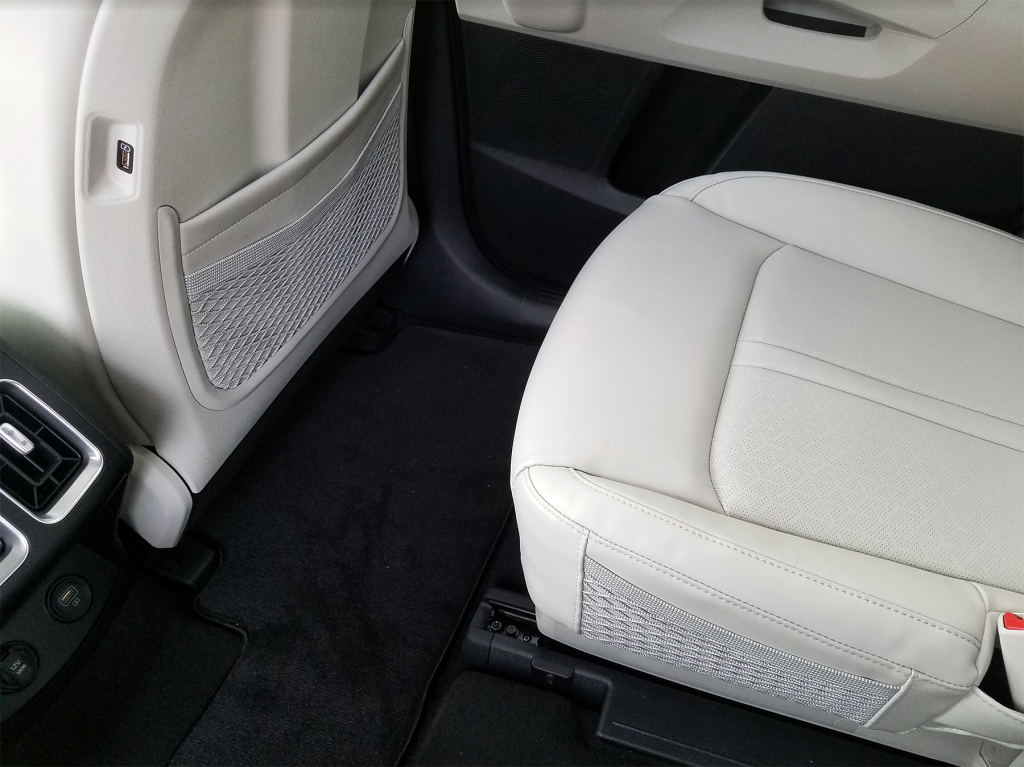 We’ve driven only the Sorento Hybrid thus far, so evaluations of the new gasoline-only powertrains will have to wait for future test drives. Our test vehicle was a Hybrid EX model, which comes nicely equipped with standard features such as a large panoramic sunroof with power sunshade, height-adjustable hands-free power liftgate, heated front seats, enhanced forward-collision warning, adaptive cruise control with stop-and-go capability, and forward-facing park-assist sensors in addition to rear-facing sensors. The lone option on our tester was Runway Red paint, a $445 extra that brought the bottom-line price to $38,205, including the $1170 destination fee—a respectable value considering the hybrid powertrain and the level of standard features.

A turbocharged engine is an unusual choice to pair with a hybrid powertrain, since both turbos and gas/electric hybrid systems present challenges to the smooth, seamless delivery of power. However, Kia’s engineers did a fine job here—the Sorento Hybrid’s powertrain is well-behaved, and delivers respectably linear acceleration. It might not be quite as polished as the latest batch of Toyota hybrids, but it’s close. The acceleration is strong enough that the front-wheels can sometimes briefly scrabble for traction if you floor it from a stop (we look forward to the AWD version for this reason), and all-around power is adequate, if not exciting, in both city commuting and highway driving.

The brakes are fairly easy to modulate for smooth deceleration, though they can get slightly grabby just before you come to a complete stop—a typical trait of hybrid vehicles, and something that owners will likely acclimate to in short order. Overall, the Sorento’s quietness is on par with class competitors. The engine note is nicely muffled overall, but it does have a rather coarse tone in fast acceleration.

This being a First Spin report, we didn’t have enough time with out test vehicle to put it through our normal fuel-economy testing procedure, but the dashboard’s fuel-economy readout indicated an average of 32 mpg after a slight majority of highway miles—below the official EPA’s combined-driving estimate of 37 mpg, though the cold temperatures during our test likely had an effect.

Though the new Sorento’s looks are sharper-edged than the previous model, its driving personality is as pleasant and relaxed as ever. The handling is perfectly competent and predictable, but not as crisp as some similarly sized class rivals. The steering feel isn’t particularly sporty either—there’s very little feedback from the road—but it is pleasingly direct and responsive. Our test vehicle rode quite comfortably, and absorbed bumps and rough pavement nicely on its 17-inch wheels. We expect that the 18-inch and 20-inch wheels (and their lower-profile tire sidewalls) on other Sorentos will bring a slight penalty in ride quality. 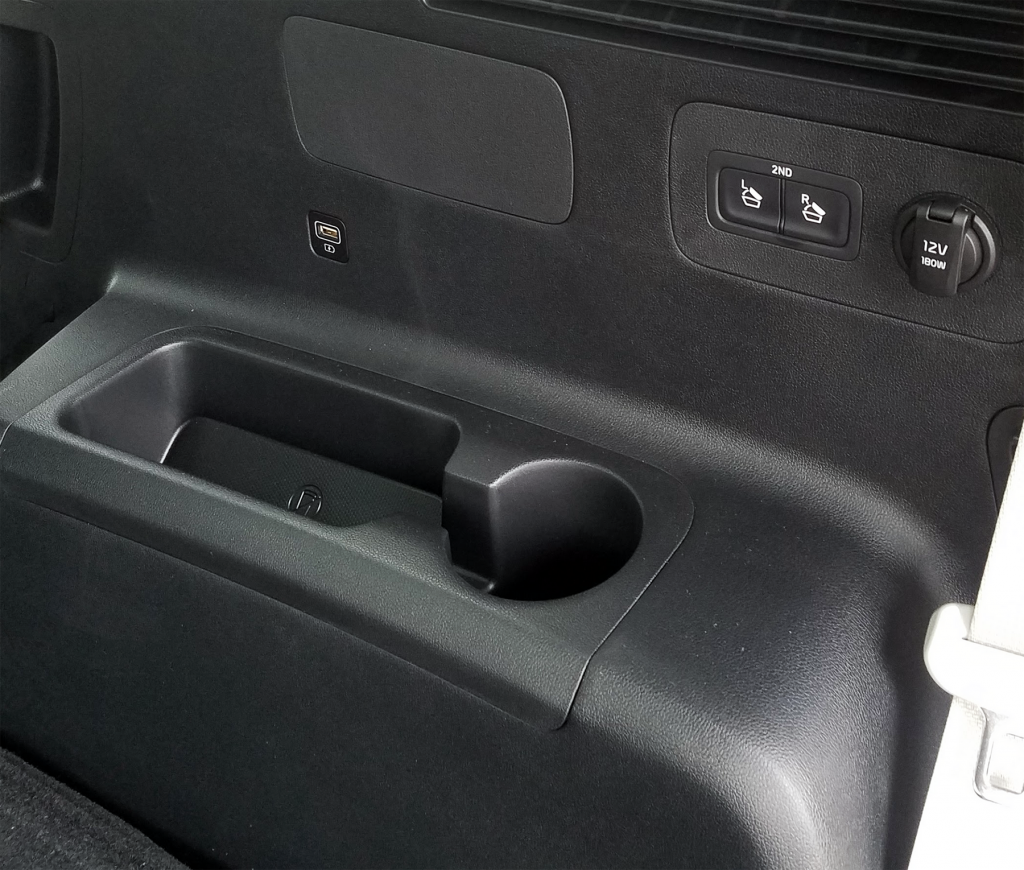 Both third-row passengers get a USB port, a cupholder, and a cell-phone storage bin. Just visible at the upper left is a molded-in grab handle that makes it easier to climb out of the back seat. The 12-volt jack and second-row seatback release buttons are accessible when standing at the rear of the vehicle.

Simple, straightforward control layouts and dashboard instrumentation are a Kia strong point, and the new Sorento keeps up the tradition. The rotary-dial shift knob is easy to use, and frees up a bit of center-console space. The climate controls are touch-sensitive; we’re typically not fans of touch-sensitive controls, which are often finicky and don’t always react to being pressed, but we had no issues with the Sorento’s setup. The dashboard’s HVAC vents have an unusual two-tiered layout so air can be directed upward and downward, or separately blocked off by closing the vents—a nice feature for extra-temperature-sensitive folks (which probably includes almost every married person’s spouse). Another nice touch: lighted USB ports that are easy to see in the dark.

There’s excellent headroom and good legroom in the driver’s seat. The seating position itself is quite comfortable—it’s a shade lower than in many midsize SUVs, as the Sorento hews a bit more to the car side of the car/SUV crossover equation than some of its rivals (we consider that a good thing). All-around visibility is quite good, though the third-row headrests intrude on the view out the rear window. A rearview camera mirror (like the ones on some GM and Toyota SUVs) isn’t available, but the SX Prestige models come standard with a 360-degree surround-view camera display and blind-spot cameras that display left- or right-side views in the instrument panel when the appropriate turn signal is activated.

Gas-engine LX and S models have a second-row bench seat for seven-passenger capacity. All other Sorentos get second-row captain’s chairs, which reduce capacity to six passengers but provide better pass-through space and a less closed-in feel in the third-row seats. The second-row seats are comfortable and offer enough legroom adult-friendly legroom if they’re adjusted all the way back. Reclining the seat backs frees up enough headroom for tall passengers—otherwise, the housing for the panoramic sunroof cuts into headroom a bit. The rear doors’ inner handles are nicely designed—they’re sturdy and easy for kids to grab and use. We also liked the second-row cupholders, which are smartly placed at armrest level at the forward edge of the door panels.

Second-row passengers get HVAC vents on the back on the front center console, as well as USB jacks conveniently located on the inboard side of the front seat backs. There are also some clever small-items storage touches, including small storage nets on the inboard side of the second-row seat cushions, and dual-level map pockets (the inner one is solid material, the outer one is see-through mesh) on the front seatbacks.

Sorento Hybrids are powered by a turbocharged 1.6-liter 4-cylinder paired with an electric motor for a total output of 227 horsepower. Both S and EX hybrid models come standard with 17-inch alloy wheels.

In all, the Sorento’s interior feels very space-efficient; there’s good room within the tidy-for-a-three-row-SUV exterior dimensions. However, if you want three-row seating AND ample cargo room behind the third row… well, that’s why Kia sells the larger Telluride. The Sorento has 12.6 cubic feet of space behind the third-row seats—enough for a small grocery run, but not a lot more. The Sorento is one of the smallest three-row midsize SUVs, but what it gives up in maximum cargo and passenger space, it gains in “parkability” and drivability.

The previous-generation Sorento was a competent midsize SUV that, despite quietly putting up some respectable sales numbers, seemed to get lost in the shuffle of that highly competitive segment. The new 2021 Sorento, with its much broader model roster, fresh styling, and new technology features, seems poised to put the nameplate on the radar of a greater number of shoppers. 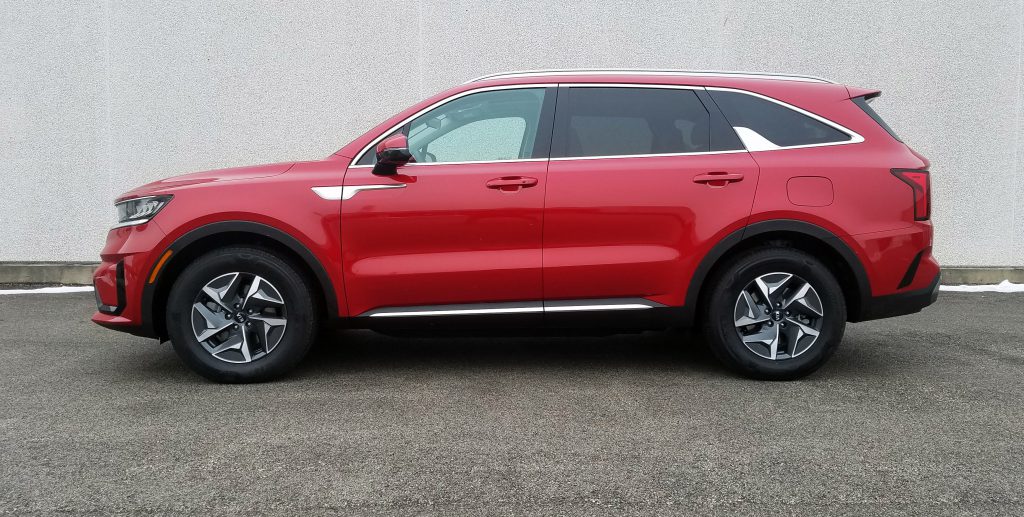 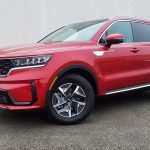 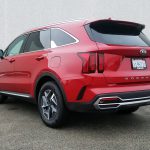 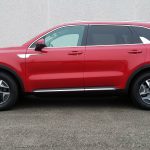 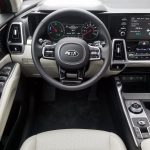 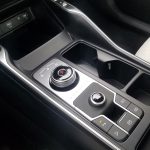 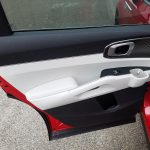 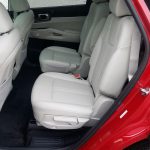 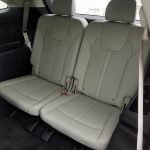 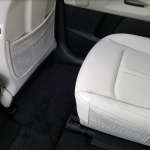 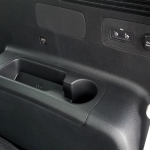 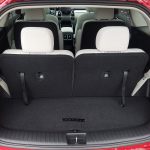 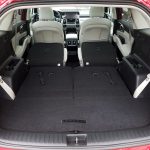 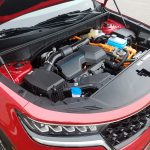 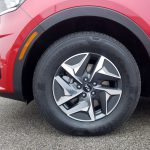 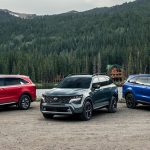