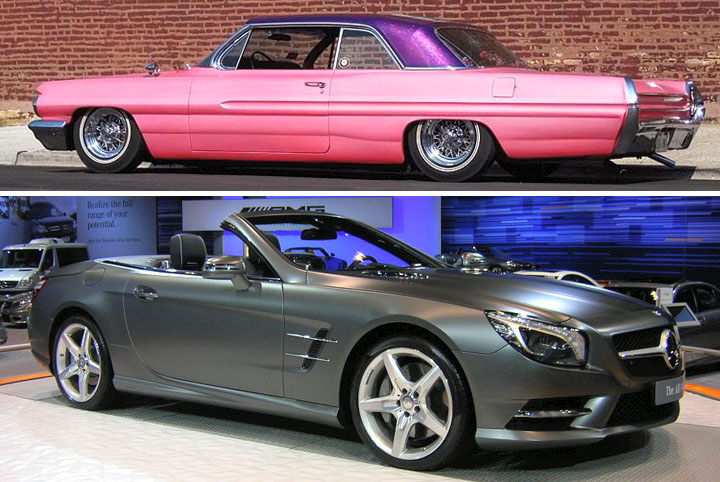 Over the last few years, I’ve found it interesting to see the emergence of non-glossy paint jobs on some new cars. Mostly appearing on exotic cars these days, matte- or satin-finish paint is something that is very dear to me. I’ve been enamored with the look since I first began to see it in the 1990s on vintage custom cars being built primarily on the West Coast.

Although I’m no expert on paint or the reasoning for why this trend emerged, I speculate that it could be as simple as a customizer admiring the unique presence a car has while it is in the base coat before the clear is applied. As opposed to older single-stage paints in which the color has a gloss to it right out of the gun, modern multi-stage paints consist of a base coat that supplies the color and a protective clear coat that provides the gloss. Many of these color-base coats, especially those that contain pearlescent pigments, have a glow about them that can be very impressive before the clear is applied. The satiny effect (without the clear coat) is dramatic, but an unprotected base coat can be vulnerable to scratches, stains, and fingerprints. Adding a flattening agent to the clear allows for protection for the color as well as maintaining the eerie glow.

Today, satin finishes appear semi-regularly on virtually every genre of customized vehicle—from tuner imports to mini-trucks to street rods—as well as on the retro customs and hot rods that originally drew my attention. Because of the way the trend has spread, it was only a matter of time before new cars began to leave the factory sporting a version of it. Over the last few years, I have seen a variety of Mercedes-Benz and BMW products as well as some Bentley and Lamborghini models with the muted sheen.

Manufacturers are playing it safe when it comes to palette, though. Mostly whites, greys, and blacks are offered on these upscale status symbols, which often mimic a look that suggests that the car is in bare metal or has body panels that are made of a material other than metal. For model year 2011, BMW offered its M3 in its matte Frozen Grey color. Also, Mercedes-Benz showed a variety of models at the 2012 Chicago Auto Show with matte grey finishes, including a CLS 550, an E63 wagon, and an SL 550.

Being the proud owner of a mild-custom 1962 Pontiac in a pearly satin finish, I always enjoy the reactions that the paint finish receives. Observers are often confused by the sheen and almost always want to touch it. Some ask questions about it and others just stare, but it’s virtually always met with positive reactions. In my opinion, a satin-finished car is like a piece of sculpture that celebrates the contours and flow of the overall design. A mirror-like gloss produces reflections on the vehicle that can distract and obscure nuances and edges that a satin finish boldly accentuates.