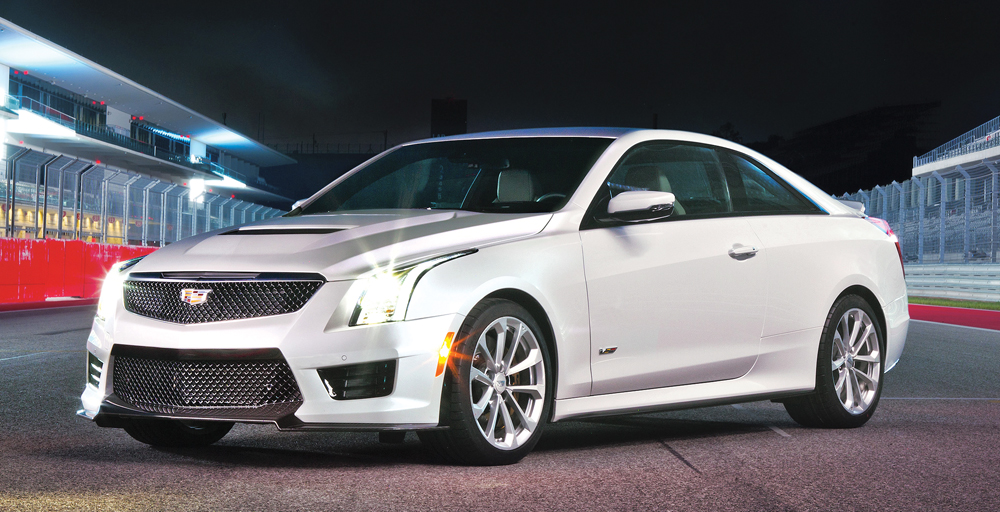 Note: The following story was excerpted from the December 2016 issue of Collectible Automobile magazine.

When the Cadillac CTS-V made its debut in 2004, the idea of a finely honed high-performance Cadillac sedan was pretty audacious. Now, little more than a decade later, racy Cadillacs are accepted, perhaps even expected, by driving enthusiasts.

With subsequent CTS-V models becoming larger, more powerful, and more expensive, Cadillac must have sensed opportunity to more directly challenge the contemporary BMW M3 sedan and its M4 coupe counterpart. The resulting Cadillac ATS-V arrived  for 2016 as a rear-wheel-drive coupe or four-door sedan, each on a 109.3-inch wheelbase. Sedans measured 184 inches long; coupes cast a shadow nearly an inch longer. Curb weight of either was a bit more than 3800 pounds. The BMWs were very close in size, but weighed less than 3600 pounds.

The ATS-V uses a version of GM’s “Alpha” architecture that bowed with the 2013 ATS and was picked up for the redone ’16 Chevrolet Camaro. For the ATS-V, Cadillac engineers stiffened the structure, reworked the suspension, beefed up the prop shaft, and tweaked the half shafts to minimize wheel hop under heavy acceleration. Brembo-brand brakes, an electronically controlled limited-slip differential, and a new third-generation Magnetic Ride Control suspension are also installed. Michelin Pilot Super Sport tires mount to forged 18-inch wheels.

Under the ATS-V’s vented carbon-fiber hood sits a 3.6-liter twin-turbocharged dohc V-6 engine. Rated at 464 hp and 445 pound-feet of torque, Cadillac says it will produce a 0-60-mph time of 3.8 seconds and a top speed of 189 mph. A Tremec six-speed manual transmission with rev matching is standard, with GM’s eight-speed Hydra-Matic automatic with paddle shifters optional. Car and Driver reported a quarter-mile time of 12.6 seconds with the stickshift. By comparison, the M3/M4 siblings use a twin-turbo 3.0-liter inline six good for 425 ponies and 406 pound-feet. The BMWs claimed a 0-60 time of 3.9 seconds with the optional dual-clutch transmission, and top speed limited to 155 mph. C/D’s M3 six-speed test car ran the quarter in 12.3 seconds.

Car and Driver’s Tony Quiroga heaped praise on the ATS-V sedan. “This car, engineered and built in Michigan, flat-out feels better, is easier to drive quickly, and is more fun than the BMW M3 and the Mercedes-AMG C63. German chassis engineering has met its match,” he wrote. Our neighbors at consumerguide.com were of a similar mind, saying “it costs a pretty penny, but it can run with some of the best high-performance cars in the world.”

Starting prices for the inaugural 2016s were $60,465 for the sedan and $62,665 for the coupe. The interior comes in a choice of three color schemes, and features a unique instrument-cluster display screen. ATS-V coupes seat four, while the sedan has room for five. Recaro performance front seats with 16-way adjustability are optional. Exterior styling highlights include the carbon-fiber hood, specific front and rear fascias, and a rear spoiler. Wider front and rear fenders make room for the super-sticky Michelins.

Reviewers’ most common gripes about the ATS-V center on a too-small back seat and a user-challenging CUE infotainment system—though tweaks for 2017 include an updated CUE. Base prices rise by $230.

Cadillac’s V-Series only has a bit more than a decade behind it, but there have already been some memorable and capable performance machines. The ATS-V may be the best one yet, and while not perfect can compete with respected German rivals without excuse.