Kia Builds a Flagship: The 2014 Cadenza

We mentioned in our coverage of the 2012 Los Angeles Auto Show that Kia is going full steam ahead to push its products up the automotive food chain. At the 2013 Detroit Auto Show, the Korean brand unveiled the next step in that effort.

The 2014 Kia Cadenza will be the company’s first effort at marketing a large car in North America. Positioned above the midsize Optima sedan, Cadenza borrows its drivetrain and key chassis components from the Azera produced by Kia’s corporate parent, Hyundai.

Like the Azera, Cadenza will come in a single trim level. The engine is a 293-horsepower 3.3-liter V6 mated to a 6-speed automatic transmission. Kia vehicles typically have a more sporting flair than their Hyundai counterparts, and Cadenza is no exception. The car will include a sport suspension. Low-profile 18-inch tires are standard, while 19s are included with the optional Technology Package.

The 2014 Kia Cadenza is scheduled to go on sale in the second quarter of 2013. Pricing will be announced closer to that time.

CG Says: There is probably not one person in the industry today who has done so much for one brand as Kia’s global design chief, Peter Schreyer. He essentially took a rudderless ship and set it on the straight and narrow, giving Kia its own identity while still maintaining a sense of cohesion across the entire product line, from the entry-level Rio to the new flagship Cadenza. While the Hyundai Azera upon which Cadenza is based hasn’t been setting the sales charts ablaze, the Kia has a real shot at upstaging its older sibling, provided the car drives as well as it looks. 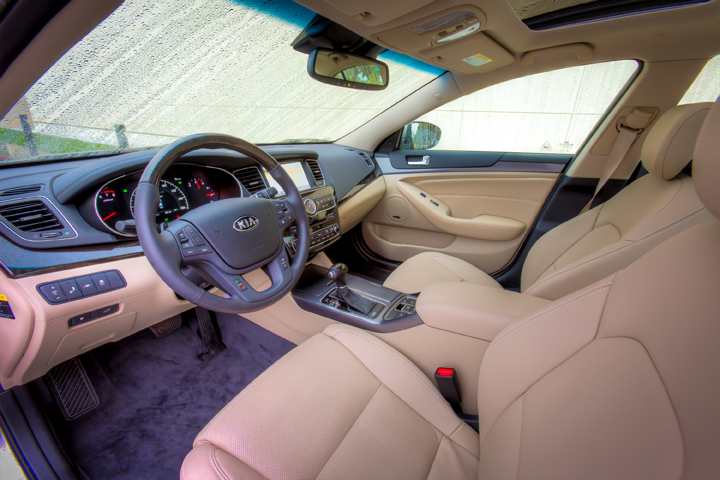