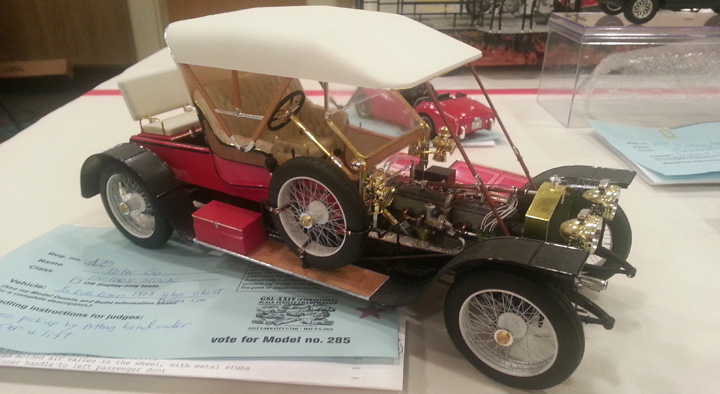 If you’re a male of a certain age, chances are you built at least one model car kit in your younger days . . . maybe several. You got a kit from AMT, Monogram, or Revell and some paint and glue from Testors, put down some newspaper on the dining room table, and did your best. Maybe your finished product turned out good enough to occupy a spot of honor on your bedroom shelf, or maybe it ended up being fodder for firecrackers in your driveway.

Today, there are passionate groups of adult model-car builders who have taken a hobby that started as a 1960s fad and elevated it into a true art form. And the place to see the best of these miniature wonders in person is the GSL International Model Car Championship—a prestigious contest that was created back in 1979 for the upper echelon of automotive-modeling artisans. It’s essentially the Academy Awards of hand-built scale vehicles. GSL stands for “Greater Salt Lake” (the contest is held biannually in Salt Lake City, Utah), and this year’s running was the 24th edition. More than 300 models from 80 or so builders were on display in the Salt Lake Sheraton Hotel this past weekend.

Though the competition is intense and judging is taken very seriously (a trio of expert judges spends over eight hours painstakingly analyzing the entries), the atmosphere is wonderfully congenial and welcoming. Builders happily share techniques and genuinely enjoy each other’s company. The contest is the main event, but there are plenty of other attractions over the course of the four-day show. Master modelers explain their building techniques in instructive seminars (this year’s show included demonstrations of 3-D printing, metal shaping, and cobalt plating), and shuttle buses ferry attendees to the nearby National Model Car Builder’s Museum for tours (both GSL and the NMCBM are brainchildren of Salt Lake City-area attorney Mark Gustavson).

The best of the models on display at GSL reach a level of craftsmanship and precision that rivals that of the premier full-size car restorers and fabricators. Here’s a sampling of the amazing works of art that were on display. For more information, check out www.gslchampionship.org.

The big winner at GSL this year was Greg Nichols’ “Backdraft”—a completely scratch-built, T-bucket-inspired hot rod chock-full of hand-machined metal parts. It took home the coveted “Best in Show” award, along with several other honors. The “Backdraft” name is inspired by the model’s rear-mounted radiator, which is positioned just behind the driver’s seat. 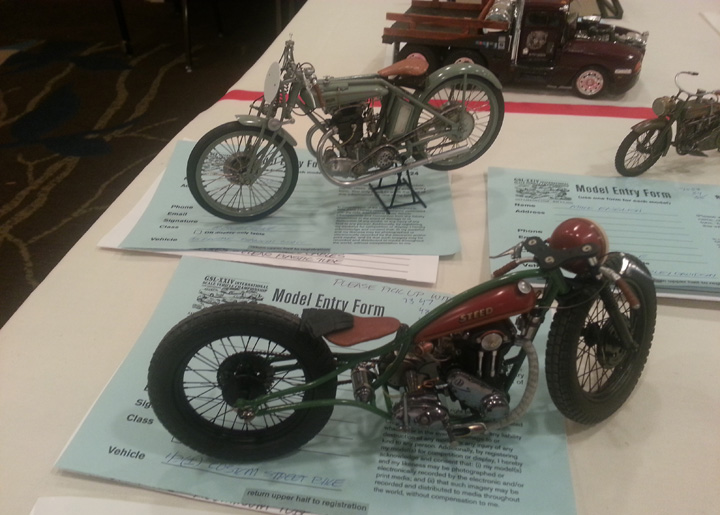 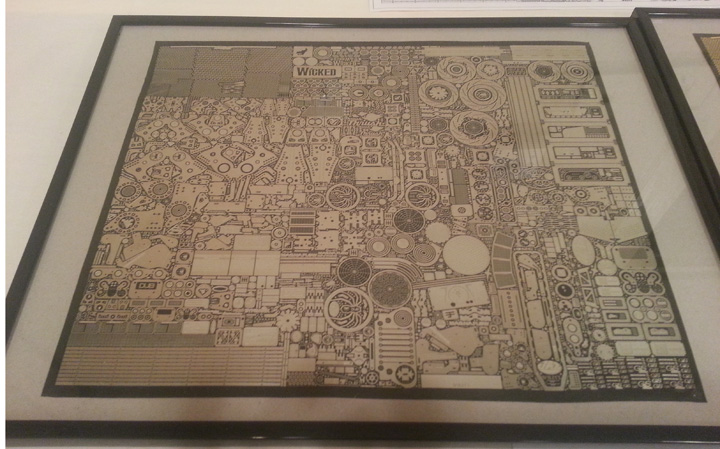 Advanced modelers use ultra-thin “photo-etched” metal parts for extra-fine detailing. Gary Kulchock crammed several projects’ worth of his own custom-made pieces onto this jam-packed sheet, which measures roughly 11 inches by 17 inches. It’s a work of art in and of itself. A Jeep grille, a manhole cover, various gaskets and brackets, speaker grilles, and a myriad of tiny bolt heads are just a few of the precision-crafted bits. 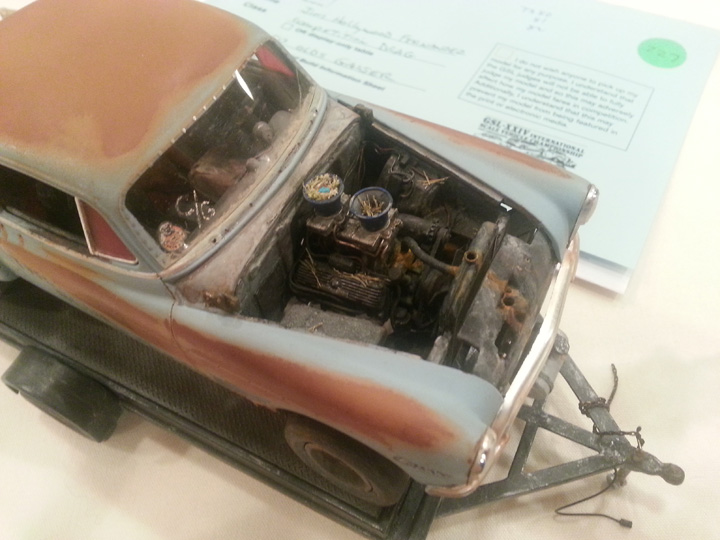 Master modelers utilize advanced painting techniques to make simple plastic-kit parts look like weather-beaten old steel. “Hollywood” Jim Fernandez built this 1/25-scale 1950 Oldsmobile 88 drag car to look as if it had spent the last 40 years decaying in a junkyard. Did you notice the robin’s nest (with egg) in the rear carburetor’s velocity stack? 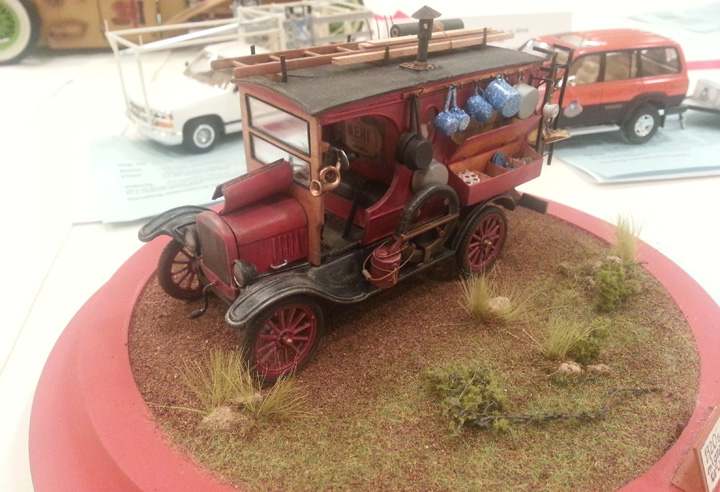 Jimmie Harris’s wondrously weathered 1923 Ford Model T “peddler’s truck” looks like something out of “The Grapes of Wrath.” It’s complete with pots and pans, a bulb horn, and a rooftop chimney. 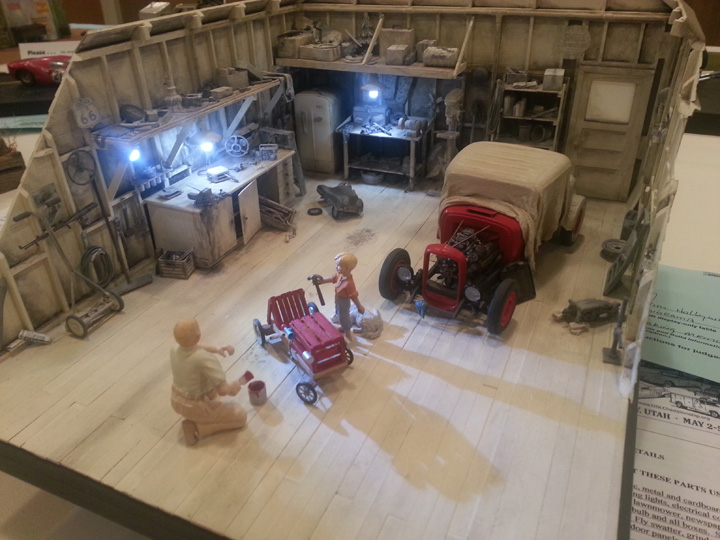 “Hollywood” Jim Fernandez’s heartwarming 1/25-scale diorama “Making Memories” makes fantastic use of color: The under-construction pedal car and ’32 Ford coupe are finished in full color, while the cluttered garage backdrop is rendered in muted black-and-white-photo tones. The level of detail here is breathtaking. 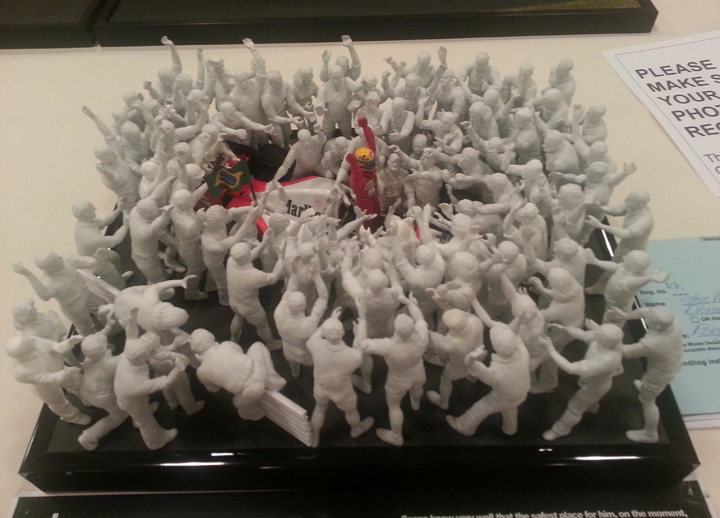 Steve Mohlencamp’s “Reign Man” diorama is similarly arresting in its use of color. It replicates the pandemonium of Formula One legend Ayrton Senna’s emotional “home turf” win at the 1993 Brazilian Grand Prix, as ecstatic fans pushed through fences to crowd Senna on the track.