Mazda at Speed: An Interview With Robert T. Davis

Consumer Guide recently sat down with Robert T. Davis, Mazda’s senior vice president of U.S. Operations, to discuss several topics, including the current state of the company’s grassroots motorsports efforts and the MazdaSpeed brand, the decision to offer the new 2014 Mazda 6 with a diesel engine, the challenges of marketing SKYACTIV fuel-efficient design technologies, and the development of the much-anticipated next-generation Mazda Miata.

Consumer Guide: Mazda has a much stronger grassroots-motorsports image than other manufacturers. Does that motorsports-based following translate to the more-mainstream vehicles?

Robert T. Davis: Yeah, it’s a double-edged sword. Right now since the economy crashed, we’ve been looking for the right formula for the grassroots effort to keep people engaged, but also have them race a car that we actively market and sell to the public. So the B-Spec Mazda 2 is a big program, [but] it’s not caught on as well as we’d hoped it would. MX5 cup is still going strong, but again, that’s a limited audience. So we’ve really got to find a way to find the next Spec Miata, per se, that’s going to be hundreds of cars racing at a grassroots level versus 50 cars. Remember, hundreds of cars in that kind of arena…that’s like the ’57 Chevy. That’s a million cars. So, that’s what we’re looking for. We’ll find it. We’re trying to make sure that we keep—even with the Mazda 6 racing program—we want to keep strongly connected to the grass roots. [Mazda North America President and CEO] Jim O’Sullivan very wisely reminds us to keep an eye on it, because other people want that space, and if we don’t protect it aggressively we can lose it. 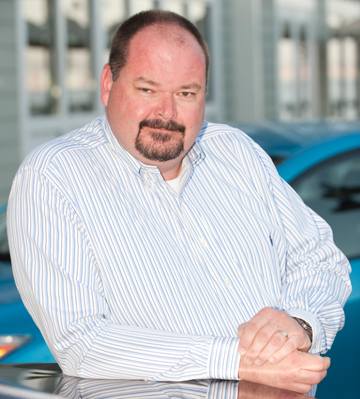 CG: Along those lines, right now the only MazdaSpeed branded vehicle in the line is the 3. There isn’t a MazdaSpeed Miata at the moment. Is MazdaSpeed going to continue to be a part of…

Davis: Our plan is it will evolve, and there will be times when there will be none. But it will all evolve; it will come and go as it is. We view that as a valuable asset to our brand, just like BMW would value M. It will come and go and ebb and flow. The best way to talk about MazdaSpeed is if you really look at the product cycle, and it’s a great opportunity to keep our product cycle fresh. So [of] the different models that you see it in, the MazdaSpeed 3 has been the most successful and the longest running, but that was more of a function of the way the product cycle works, not necessarily anything other than that.

CG: So there could be a MazdaSpeed variant in the new Mazda 6’s future?

Davis: Yeah, we don’t comment on that kind of stuff, but yeah, obviously.

CG: The new 6 has a diesel engine coming. Obviously you’re bullish about the future of diesel.

Davis: Yes. If you look at the landscape, the Europeans have been very strong in diesel–Audi and the Volkswagen group have made a huge commitment to diesel, both in motorsports and in mainstream. We feel strongly, I think like most people with a deep understanding of the CO2 issue and the U.S. having a non-imported energy supply, that it’s not one particular [solution]. It’s not going to be a silver bullet. It’s going to be a combination of pure electrics, plug-in hybrids, hybrids, diesels, gasolines–and even with gasoline you see different choices now between small displacement, turbocharged, [and] stuff like we’re making with SKYACTIV, which I view as “correct-displacement” high-efficiency engines. And then diesel is obviously a solution to that. So SKYACTIV D with ultra-low-compression diesel should allow us to have all the benefits that you see with the European diesels without the urea treatment…and with a conventional automatic transmission.

CG: So there is not going to be an additional particulate filter or treatment necessary?

CG: Are you confident that Mazda buyers are willing to make that jump to diesel?

Davis: Yeah. We’ve done a new vehicle owner survey consistently now for 12 years. It’s very good for us because we’ve been surveying and we have not changed that survey methodology. So we ask people what will you consider in your next purchase as far as alternative powertrains, and diesel has grown quite a bit. So have hybrids, so has electric. But our customer is pretty advanced and knows our industry, and they like being on the cutting edge of technology, and they like knowing and being informed. That’s why they’re enthusiasts; that’s why they’re racers.

CG: So I guess in that respect you have an easier sell, because the typical Mazda buyer is going to be a bit more…

Davis: And also with things like [the Consumer Guide] site and other websites–our customer does a lot of research, and [auto journalists] generally support the diesel program because [they] know how the cars drive. [The] mass market kind of follows the political view, which is everything has got to be electric. But I think we all know that’s one of the solutions, but it’s not the solution.

CG: It’s interesting that you say that there’s not a single silver-bullet solution, and that seems to be played out in your product strategy.

CG: SKYACTIV seems to be an effort to bring all those ideas under one umbrella and communicate it to the consumer that way.

Davis: And that’s what makes it so difficult. If SKYACTIV was just an engine, it would be a lot easier to talk about. But it’s the whole compilation.

CG: So obviously that’s been a challenge. Are you happy with the way consumers seem to be getting it?

Davis: Yeah, the dealers tell us that the consumers come in and they might not know what it is, but they know what the benefit is. And then the marketing groups see that you don’t need to know that it’s 20 percent more high-tensile steel and the best coefficient of drag in the segment. You just need to know the benefit of it, and that you want it. So we’ve got more to go. The racing program will help it. The launch of every new program will help it.

CG: Will the racing program help promote the SKYACTIV name?

CG: As far as the Mazda 6’s future goes, is there a possibility of V6 power in the future?

Davis: No, there’s no possibility.

CG: Will the 6’s diesel engine be positioned as the “hot-rod” variant?

Davis: Yeah, it will be the premium engine choice. So, our strategy with Mazda 3 and 6 in the past was an i and an s [trim level]: The i was the base engine configuration, and the s was the premium or upscale. That’s why the diesel is going to be made available only with the Touring and Grand Touring trim.

CG: So there won’t be a base-model Sport diesel.

Davis: Right. And really that backs up what you see Volkswagen and some others doing with diesel. In the 1970s, diesel’s positioning was “super-miser! $4,995!” Now diesel is seen as a premium, and that’s good. That’s what we all want…the halo of that.

CG: Any possibility of a turbo?

Davis: There’s always the possibility of it.

CG: Is there anything you can say about the next-generation Miata’s development?

Davis: We’re working hard on it. We signed our formalized agreement with Fiat for Alfa Romeo, and we’re really looking forward to it. From a manufacturing-efficiencies standpoint, if you’re developing a 4-cylinder front-engine rear-wheel-drive car—a roadster especially—the more volume that you can commit to up front, and to have the resources to amortize the tooling and the engineering and everything, the better off you are. So we see this as a perfect opportunity, because their top hat (an industry term for upper body structure/styling—Ed.) will be unique, and their powertrain will be unique. So, really the two brands should coexist very well. We’re going to build the car for them in Japan, so I think it’s a really good thing, especially good here in the U.S. where they want a presence.

CG: So styling-wise, the Mazda version and the Fiat version will go their separate ways?

CG: Is there a product release date? Are we looking a couple years down the road?

Davis: There’s a projection, but we just can’t say it. It’s a great partnership. I think both of us [Mazda and Fiat] will be really happy with the output.

The current-generation MX-5 Miata (shown) debuted for the 2006 model year. Mazda has partnered with Italian automaker Fiat to co-develop the next-generation Miata platform, which will be shared with Fiat subsidiary Alfa Romeo.