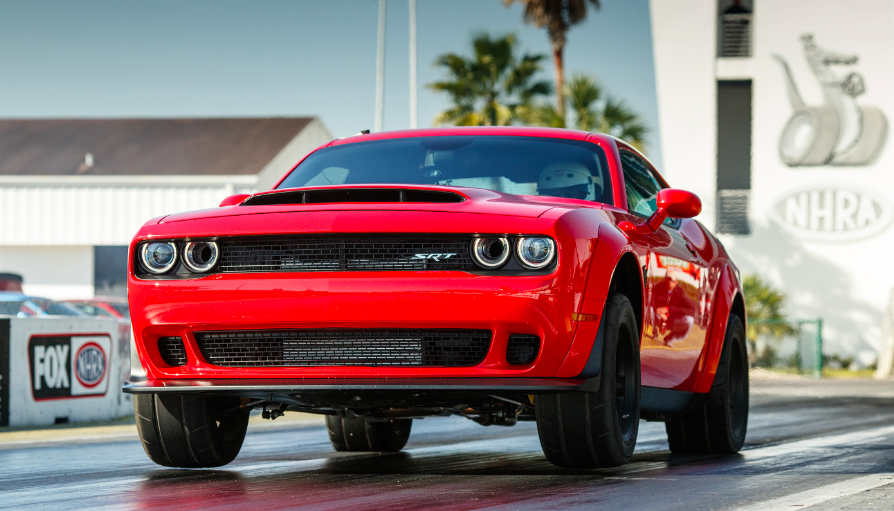 It’s all about the launch.

That was the lesson we learned when Dodge invited a group of journalists up to US 131 Motorsports Park in Martin, Michigan, to pilot its new Challenger SRT Demon down a gen-u-ine drag strip – complete with burn-out box, gooey starting-line surface, staging lights, and a full quarter-mile run. The real deal. Personally, it was the first time I’d ever driven a car on a drag strip … at least, one that didn’t have center stripes and a grossly ignored speed-limit sign (don’t tell the feds). We also learned that getting the launch right is not nearly as easy as one might think.

With most street cars – at least, those having an automatic transmission – getting a strong jump off the line is simply a matter of flooring the throttle. But most “street cars” don’t have 840 horsepower.

The Dodge Challenger Demon does. And that means getting a strong jump off the line requires some high-tech intervention and no small amount of skill.

Of course, “strong jump” is a relative term. If all you want to do is just beat the ever-lovin’ tar out of virtually any street car ever made, all you have to do is floor the Demon’s throttle and let the traction-control system do the rest. But if what you want to do is pick the front wheels off the ground and smash your brain against its cranium with 1.8 Gs worth of accelerative force, well ….

First, let me tell you that having that kind of pressure applied to a body previously at rest results in somewhat of a discombobulating experience. Your head actually swims. Or at least, it does when you’re in the passenger seat of a Demon driven on a drag strip with a professional behind the wheel. Which we were – before we were allowed to try it ourselves.

But let’s start off with some background on the Demon itself. 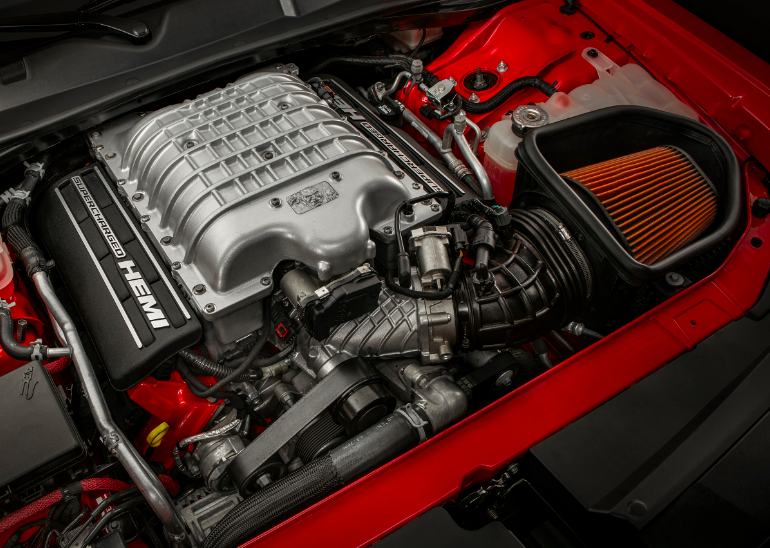 Not only does the Demon’s supercharged V8 make 840 horsepower when fed 100-octane racing gas, it also pumps out a tire-shredding 770 lb-ft of torque.

As might be expected, the engine is based on the supercharged 6.2-liter Hemi V8 found in the Challenger Hellcat. But to add 133 horses to the 707 already in residence takes some doing – and some 100-octane racing gas (though the engine can run just fine on 91 octane premium). Among the modifications are a larger supercharger, high-flow injectors and fuel pumps, a huge Air-Grabber hood scoop, an SRT “Power Chiller” that uses cold air from the a/c system to cool the intake charge, and internal modifications that allow for a higher rev limit – and long-term survival. That last element is important because the Demon is covered by the same 3/36 bumper-to-bumper, 5/60 powertrain warranty as other Dodge vehicles(!).

In base form, the Challenger Demon has no front-passenger or rear seat, though both can be added for $1 each. Order the optional (also at $1) Demon Crate, and you get a personalized dash plaque. (An example — seen on one of our test vehicles — was made for “John Dodge,” one of the original Dodge brothers.)

While the star of the show is certainly the engine, there is a large cast of supporting characters. The suspension has been set up for rearward weight transfer under acceleration, massively wide 315/40ZR18 Nitto street-legal drag radial tires are fitted for maximum traction, line lock applies only the front brakes so you can, uh, clean off (and heat up) the rear tires for better grip off the line, and an exclusive TransBrake holds the car stationary while revving the engine by locking up the transmission internally, allowing you to launch simply by releasing one of the steering-wheel paddles. Weight is saved by making the front-passenger seat and rear seat optional (for $1 each), and the optional Demon Crate accessories package – also $1 — includes narrow front wheels (you have to buy the tires) that cut a few more pounds. (The Crate also brings an impressive set of tools along with a buyer-specific dashboard serial-number plate.) Also, virtually every part of the driveline has been strengthened to handle the added power – and prevent Dodge from going broke honoring the aforementioned warranty.

The Demon Crate includes narrow front wheels (but not the tires) that help pare a few pounds off the front end. Standard on all four corners are huge 315/40ZR18 Nitto street-legal drag radials. Note the debris on the rear tire. That would be bad for starting-line traction, but we were taught a simple way to scrub it off.

Now for the fun part.

The Demon has three Drive Mode selections: Auto (for street driving), Custom (which allows drivers to set their own priorities for suspension settings and steering feel), and Drag Mode. Needless to say, we engaged the last.

Here is the sequence we used for maximum launch. 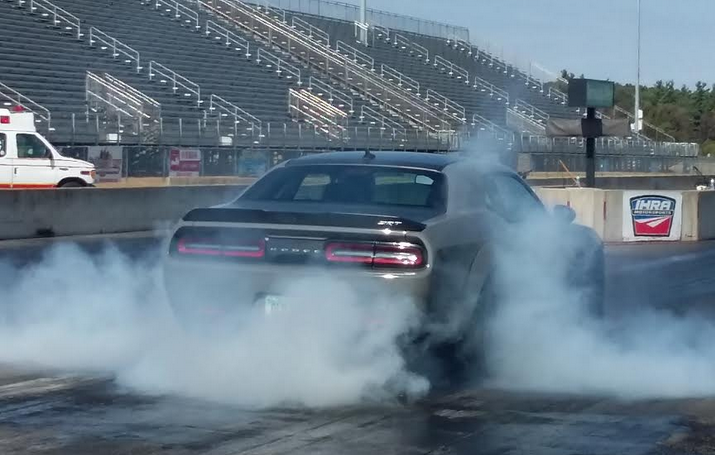 Dodge recommended cleaning and heating the rear tires before launching. Oh, if you insist ….

After Drag Mode is selected, drive through a “water box” (a patch wetted down with a hose) to get the rear tires wet, then onto a slick section of the raceway.

Punch the Line Lock virtual button on the touchscreen.

Push hard on the brake pedal until a meter on the dash says you’ve reached a certain pressure threshold.

Press and hold the “OK” button on the steering wheel, release the brakes, feed in the gas, and smoke the rear tires until they’re good and hot and sticky.

Release the OK button (foot still on the gas), and the car will move forward slowly as the tires regain some grip.

Drive up to the starting line, which places the rear tires on a gooey surface that will – quite literally – pull the shoes right off your feet.

Take a deep breath (because now comes the tricky part).

Press and hold down the brake pedal and pull in both steering-wheel paddles.

Rev the engine to about 2000 rpm. (Optimal engine speed varies based on the traction available). This will produce a “stuttering” sound, because the car’s Torque Reserve system cuts fuel to some of the cylinders to reduce power applied to the driveline while still allowing supercharger boost to build.

Now you have only about five seconds (after which the system shuts off) to do the following in sequence:

Release the right paddle – which will immediately launch the car

Slowly push the gas pedal to the floor 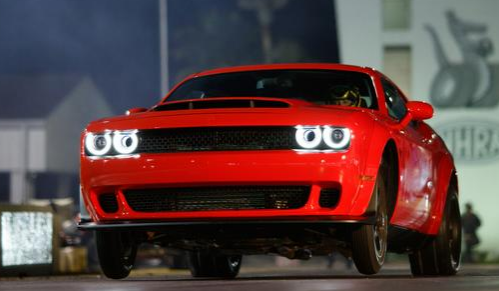 Get the launch right, and the Demon will pick its front tires off the ground.

It’s that last one that’s really tough to get right. Nearly everyone – and that includes me – gets the urge to just floor the throttle, which will simply smoke the tires. To maintain traction – and thus get the best time – you really need to feed the power in gradually. Eventually, after about eight runs, I managed to get it near right. But it’s a lot harder than it sounds, partly because your brain doesn’t function optimally under 1.8 Gs of acceleration.

Granted, all these were produced on a drag strip under optimal conditions, but still ….

Demon’s 1/4-mile time slip showing a 9.65-second run (at 140 mph!), which was certified by the NHRA — as being too fast to allow to race without additional safety equipment — while Guinness certified its 2.92-foot “wheelie.”

And how much does it cost to put a Demon in your driveway? Not as much as you might think, as the quickest production car on the planet retails for $86,090 including gas-guzzler tax and destination charge, with deliveries due to start later this fall.

But there’s a catch. Dodge is indicating that the Challenger SRT Demon will only be sold for one model year, with just 3000 coming to the U.S. (another 300 to Canada), and orders opened up on June 21st. Furthermore, not all dealers can sell them, so you’d not only have to find one that does, but one that hasn’t already sold out its allocation. Aiding in this regard is a customer hotline you can call (800-998-1110), but we wouldn’t advise putting it off. Because we suspect an awful lot of people are looking forward to the opportunity to exorcise Dodge’s Demon for themselves.

It’s hard to call an $86,000 car a “bargain,” but the Challenger SRT Demon is worth every penny … to the right buyer.

P.S. – You know it’s a stellar day when a 475-horsepower Durango SRT and a 707-horsepower Challenger Hellcat Widebody – which were also in attendance – are not the hottest toys in the sandbox.