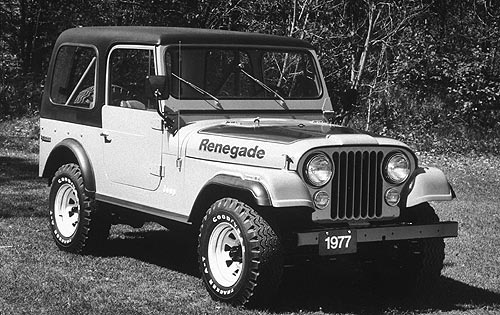 I’ve driven some pretty refined vehicles in my day. In an earlier blog post, I noted my affinity for the Mercedes S-Class. When it comes right down to it, I’ve grown intolerant of vehicles that make noise—or ride too harshly—while offering little real performance in exchange.

Around the office, I’m the guy who complains about engine quake at idle and road noise at speed. I appreciate precise and accurate shifters (Acura TL), quality AM radio reception, and smooth-opening center-console lids. In my opinion, cars cost way too much these days for anyone to put up with less than excellence. Still . . .

Being a man means answering to chromosomal urges that defy logic. So while I would like to spend most of my time driving fast luxury sedans, there’s a part of me, say 13 percent of me, that aches for something more fundamental—something more, dare I say it . . . honest.

For me, now, that honest ride would be a Jeep CJ-7.

Jeep Wagoneer: The Vintage SUV That’s Simply to Die For

I spent a portion of my college years tooling around in a CJ that my father had acquired—and really didn’t want—in exchange for forgiveness of some debt or another. My father was annoyed, but I was thrilled. The Jeep had clearly been originally ordered by a madman, as the equipment list made no sense. The 1977 CJ sported a hardtop, air conditioning, the 304-cid V8, and . . . wait for it . . . a 3-speed manual transmission.

By the time that truck hit our driveway, the air conditioning didn’t work (and never would work again) and the white paint was permanently stained in places by something in another shade of white. Our CJ sat on 31-inch, all-terrain tires on white-painted wheels, and it had the Levi interior.

We took the top off on day one and never replaced it. My father and I managed (badly) to install snaps for a soft top that we purchased used. I don’t recall if the radio worked, but the burglar alarm worked well, and it was a hoot to screw with it in quiet neighborhoods late at night.

One of the first things I learned was that you don’t really drive a CJ; you ride it. Few vehicles can match a CJ for open-air fun once the doors and top come off. The raw, mechanical feel of the shifter, which was both heavy and accurately gated, combined with the blatty, low mumble of a V8 venting through a porous exhaust system was therapy beyond sufficient sleep or splitting a 12-pack on a work night.

The CJ rode like hell, was nightmarish at speeds over 50 mph, and sucked gas at a prodigious 10-mpg rate, but it was also completely awesome. Who knew that you could light up all four tires on slippery surfaces? At the time, the area I lived in was rich in new construction and pretty light on law enforcement. This meant that off-roading opportunities were pretty much everywhere. No rock pounding, just ditch and puddle jumping with the occasional climb over a hill of unwanted topsoil. As I recall, I never got stuck—well, stuck enough that my buddy and I couldn’t eventually work our way out.

On sunny days, I often recall the faded, dinged-up, thirsty tractor that was our CJ. There was nothing refined about it, but it did scratch a chromosomal itch that reoccurs every now and again.

I’m pretty sure I could talk my wife into such a vehicle now—well, not exactly now, due to our work on the kitchen, but soon. But, I am not sure it would be the same. There’s no place to just turn off road around here anymore, and I’d likely feel guilty about driving anything that didn’t do better than 12 mpg. Maybe I’m wrong.

I drove that Jeep so often with the top off that I found it easier to get a crew cut than to try and comb my hair after a drive to work or school. As it turns out, I still get my head buzzed on a monthly basis, so I’m at least partially ready for another CJ. I’ll let you know if the man thing kicks in.